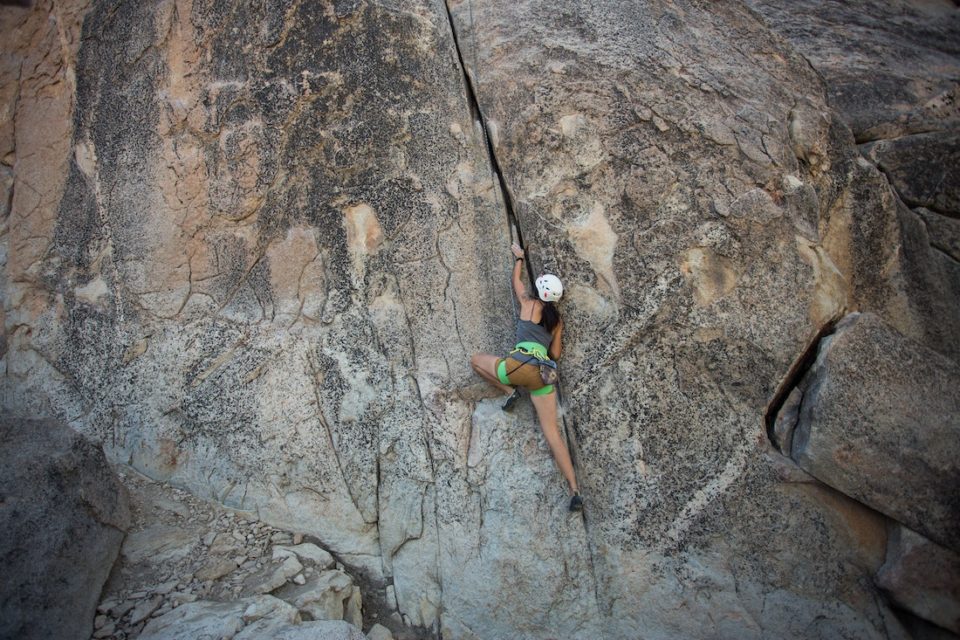 We were thumbing through the stacks at the AJ archive over the weekend and came across this forgotten little gem. So we’re putting it back on the homepage for another go. Enjoy. -Ed.

I slowly paid out rope as Lee grunted and mantled over the top of the cruxy bulge. “Sweet!” I almost squealed with excitement as he placed a cam and clipped into it. But then I quickly lowered my voice, afraid I sounded silly. Lee is a good friend, experienced climber, and longtime partner of my boyfriend, but it was our first time partnering up for a climb. It was also my first time climbing in the storied Eldorado Canyon, and I wanted to be a solid, supportive partner, and to be taken seriously. I wondered, was my cheering getting on his nerves? Would he rather be climbing with a guy?

A recent blog post on Touchstone Climbing-What Girls Think (About Climbing With Dudes)-compiled all sorts of hilarious and horrifying stories from women about climbing with men. Women relayed tales of men automatically assuming they wouldn’t lead, discouraging them from climbing steep routes, and laughing off their sends because the women “weighed less” or “have a lower center of gravity.”

I’ve been fortunate to have encouraging, understanding male climbing partners, but the post made me appreciate the wonderful female climbers in my life all the more. What is it that’s so awesome about climbing with women?

We can teach you something. It’s rare that women have the same upper-body strength as their male partners, so we often figure out more refined techniques to get us up the wall than relying simply on strength. “I tend to think that women are naturally much better climbers than men, so I feel like I can learn a lot by watching how they climb,” says my friend BJ, mastermind behind the blog SplitterChoss.com and climbing coach at the Colorado Rocky Mountain School in Carbondale, Colorado.

We’re less likely to infect you with summit fever. The fun factor in climbing is more appealing than ego-driven posturing and a summit do-or-die attitude, says my friend Aaron, a Seattle-based mountaineer. “I find that the objective is usually reached just as often when having fun doing it, rather than focusing only on the outcome.” Of course, some women throw ego around, too, but it’s much more rare, Aaron says. He found himself taking a break from climbing altogether for a while, having been put off by ego-driven partners. Finally, he connected with a young lady who was just as stoked to climb hard, but without the annoying braggadocio.

We’ll give you a comfy environment to try something new. I interviewed Ines Papert after an all-female ice-climbing clinic, and she said when it’s all women, the climbing atmosphere is different. For whatever reason, among ourselves, we women are much less inhibited and much more stoked to try something new and potentially difficult. “When it’s all women, everyone is going for it, and trying again and again.” I’m thankful to have found the same thing among my lady friends: positivity, encouragement and support for the send.

The best places to visit in Kentucky and Indiana from Louisville

Discover the best national parks in Jordan in 2022

How You Can Assist Rebuild Paramount Ranch After the Woolsey Fireplace