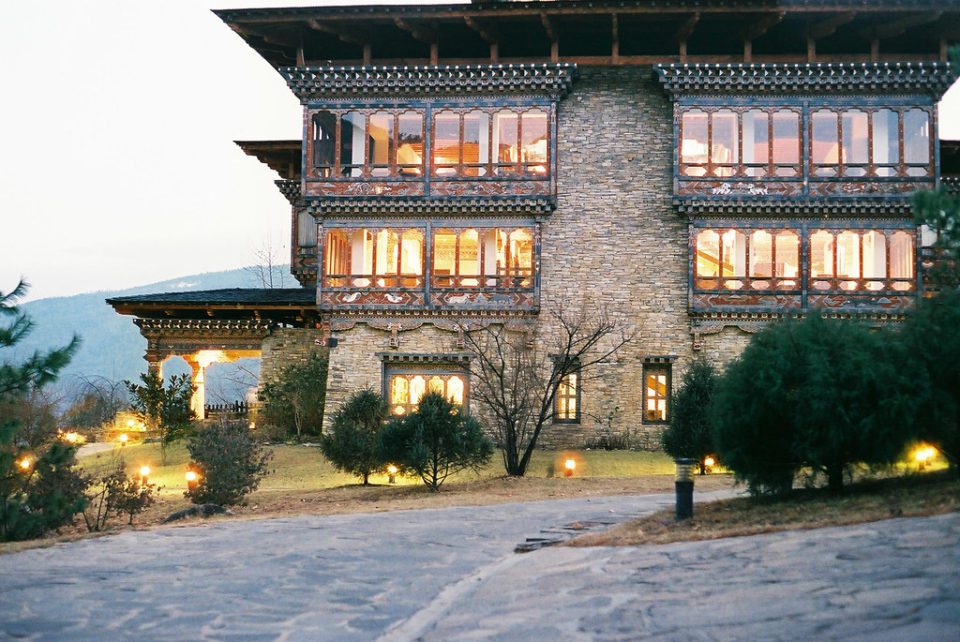 Bhutan is famous for many things: its strong sense of identity, high-altitude isolation, and an emphasis on Gross National Happiness — food, however, is not one of them. Bhutanese food is a mystery to many; even hard-core food junkies are hard-pressed to name the most popular Bhutanese dish.

On my trip to the land of the Thunder Dragon, I was spellbound by the outstanding natural landscapes, ancient architecture, and the whimsical spirit of its people — but its food, strangely, left the deepest impression on my soul.

My journey into the Bhutanese culinary scene began not long after I arrived at Paro International Airport. Minutes after my plane touched down, I was whisked away for a traditional meal with my guide, Sangay.

Over lunch, Sangay shared insights into Bhutan’s emphasis on heritage and environmental conservation. According to Sangay, the Bhutanese people have a deep reverence for nature and tradition because of their Buddhist culture. I asked him if that was also the reason why this tiny Himalayan kingdom was named “the happiest nation in the world.”

He shrugged his shoulders, and said, “I don’t know, maybe it’s because we’re Buddhists… maybe it’s the food!”

Lunch arrived soon enough and endless platters of vibrantly colourful dishes were spread across the table, like a Lunar New Year feast — from the piquant phaksha paa, chunky pork fillets fried with spicy red chili, to the heavy jasha maru chicken curry. A mountain of red nutty rice was piled onto my plate, along with a dozen aromatic hoentoe, buckwheat dumplings stuffed with turnip greens.

The last plate that was dished out caught my eye: large green chilies soaked in yellow melted cheese. Sangay explained with much enthusiasm, “This is ema datshi. You’ll find it at every meal. If Bhutan had a national dish, this would be it.” 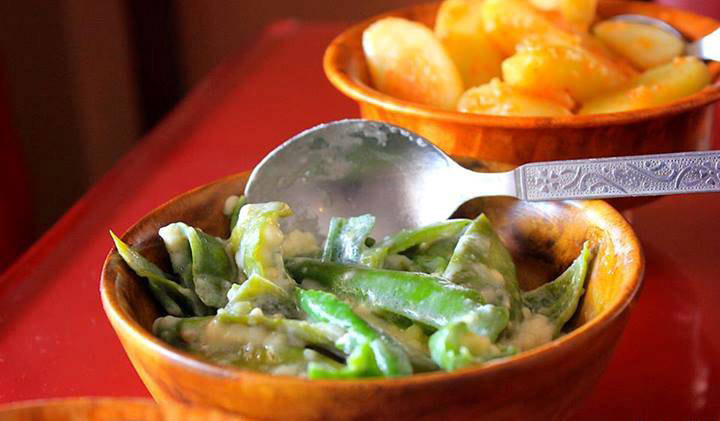 A love affair with spices

The next morning, I headed to Thimphu, the largest city and capital of Bhutan. I was just in time for the weekend-only Centenary Farmer’s Market, the largest domestic market for farmers in Bhutan.

Heaps of rice were piled sky high in the market, alongside sacks of potatoes and stacks of cheese. As Sangay explained, farming is the mainstay of sustenance in Bhutan and the Bhutanese diet is largely composed of crops they grow and dairy products from their livestock. Rice, therefore, is consumed at every meal, with red rice being the most popular option as it’s the only variety to grow at high altitudes.

Not surprisingly, the most common product found in the market was chili. The variety of chilies was mind-boggling: red, green, fleshy, slender, round, dried, blanched, powdered, and pickled. In various forms and species, they hailed from different parts of central and western Bhutan.

Strangely enough, chilies are not indigenous to Bhutan. As Sangay explained, chili probably came to his nation through India, and became an integral part of the Bhutanese diet because it was a natural way to stay warm in winter. Back in those days when they didn’t have any proper heating systems for houses, spicy meals were an easy option.

Chilies also hold importance in Bhutanese rituals outside the kitchen. “From time to time, every house burns some chilies to keep the bad spirits or the demons away,” he said.

That evening, Sangay and I drank a round of ara, a local rice wine. And guess what was floating in the transparent firewater? A trio of red piping chilies.

Back in Paro, Sangay brought me to a farmhouse just a few kilometres outside of town to join Ama Om in her kitchen. When we arrived, she was already cooking up a storm, frying up tender chunks of beef with a handful of dried chilies, and melting down blocks of yak cheese. The aroma of fresh, steamed rice and pungent chili permeated the air.

The gregarious 60-year-old Ama Om told me that the meal she was preparing today was the classic Bhutanese grub she’d eaten since childhood. She had learned the recipes from her mother, who had in turn inherited them from her own mother. 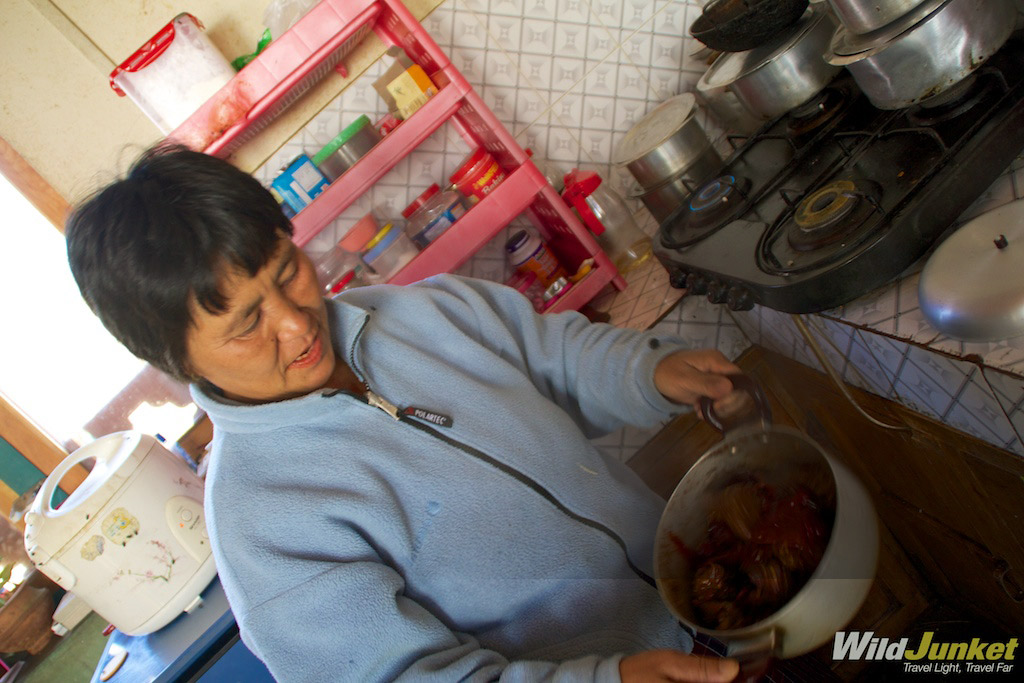 Ama Om showing me the ropes in her kitchen.

When it came to culinary traditions, few things in Bhutan have changed. All the vegetables that they cooked in the kitchen were still grown in their garden, and the meat was from animals they reared.

As we sat down at the table with Ama Om and her family, a round of salted butter tea, or sura, was served. This ubiquitous drink is extremely popular in the high-altitude Himalayan region (including Tibet and Nepal), and often drunk with every meal.

Preparing to tuck in, Ama Om showed me the way they usually eat at home: with nothing else but their hands. Eager to fit in, I carefully scooped up a ball of rice with my fingers and kneaded some beef and a big slice of red chili in before swallowing it all in one gulp. 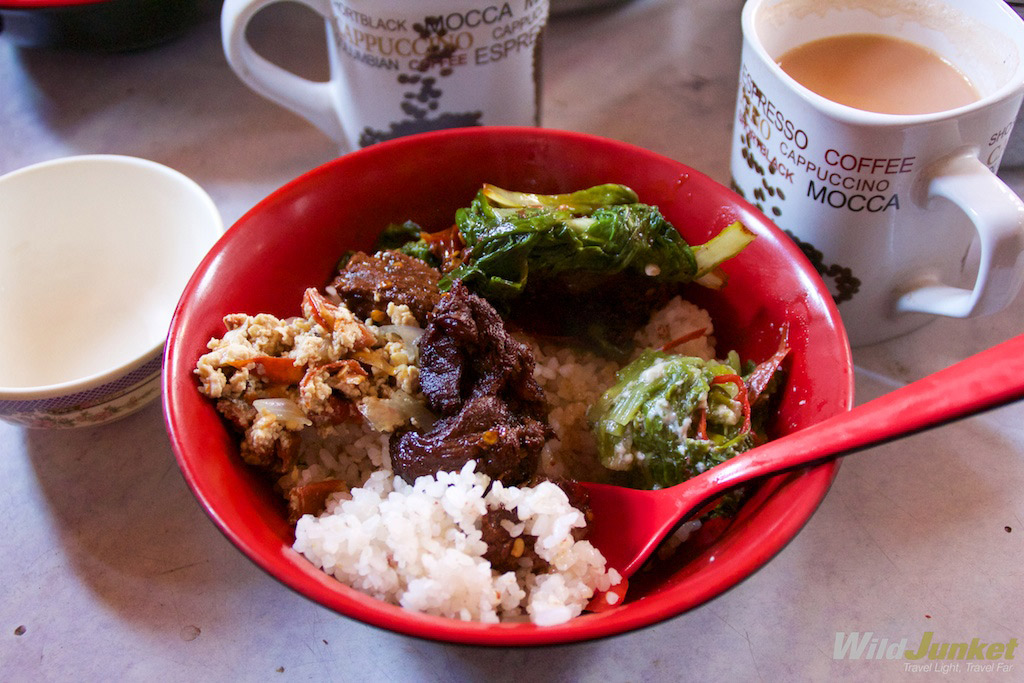 The explosive heat caught me by surprise, and spice-provoked tears streamed down my face; but just like the Bhutanese, I wouldn’t have it any other way.

As my journey in Bhutan came to an end, I never quite put my finger on the reason why the Bhutanese are such a happy bunch, but one thing is for sure, food definitely has a part to play.

We run a number of tours in Bhutan but are extra excited to announce two new adventures. Following extensive restoration, the Trans Bhutan Trail is opening in March 2022 for the first time in 60 years! Even better, we’re selected as the first group adventure operator. Join us on 11 and 12-day adventures to trek the trail’s diverse scenery, explore timeless villages, discover famous Dzongs, and support local communities along the way.

The 8 Bad Habits of Climbing—And Their Remedies

Snowboarding at 101? Positive, if You’re George ‘The Optimist’ Jedenoff