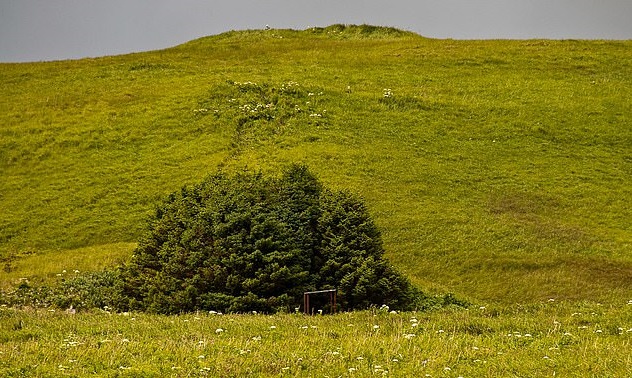 Adak National Forest consists of only 33 trees and located on the remote island of Adak in Alaska USA. It is only suitable for travelers who are able to withstand strong winds as well as harsh weather.

The origin of this strange “forest” began during World War II, when Brigadier General Simon Bolivar Buckner Jr and 6000 soldiers took charge of protecting Alaska from the invasion of the Japanese army. He ordered the soldiers to plant the first trees on the island of Adak.

The tree planting programs to help encourage the morale of the soldiers at Christmas was deployed on the island of Adak from 1943 to 1945. Despite the harsh weather, many trees could not survive.

In the 1960s, only a few trees survived. Some soldiers put up signs that mocked: “You have just arrived and left the Adak National Forest”. Since then, the name Adak has been used so far, although it has not been officially recognized.

The largest national forest in the US is Tongass, also located in Alaska. It covers an area of ​​about 6.9 million hectares and includes many large glaciers.

View more detail with this video :

Waiting for the last supermoon of 2020 next week

Cornwall England Most Beautiful Beaches you can’t miss in 2022

Some genuinely excellent info , Gladiolus I discovered this. “If you don’t make mistakes, you aren’t really trying.” by Coleman Hawking.

Thank you ever so for you blog.Thanks Again. Really Great.

Very interesting details you have observed, appreciate it for putting up. “Ignorance, the root and the stem of every evil.” by Plato.

I would like to thank you for the efforts you have put in writing this web site. I am hoping the same high-grade website post from you in the upcoming also. Actually your creative writing abilities has inspired me to get my own blog now. Really the blogging is spreading its wings quickly. Your write up is a good example of it.