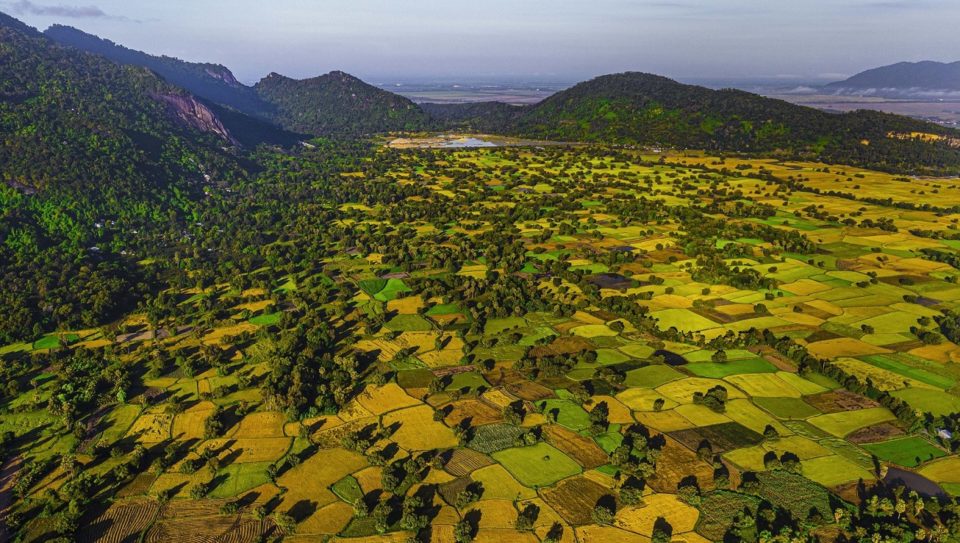 A land of temples, mosques and pagodas, An Giang’s festivals attract millions of pilgrims; and its palm-fringed rice fields and other natural delights have become a tourism draw.

Between March and May is the busiest time in An Giang, highlighted by the Ba Chua Xu (Lady of the Realm) Festival, one of the largest in the Mekong Delta, that takes place every lunar April, attracting millions of pilgrims.

Between September and November, the flooding season in the Mekong Delta creates great opportunities for boat rides through cajuput forests along canals covered with green water-ferns.

WHERE TO STAY AN GIANG VIETNAM

Most budget motels and hotels are located at the foot of Sam Mountain near the Temple of Lady of the Realm with prices ranging from VND100,000 to 500,000 a night. 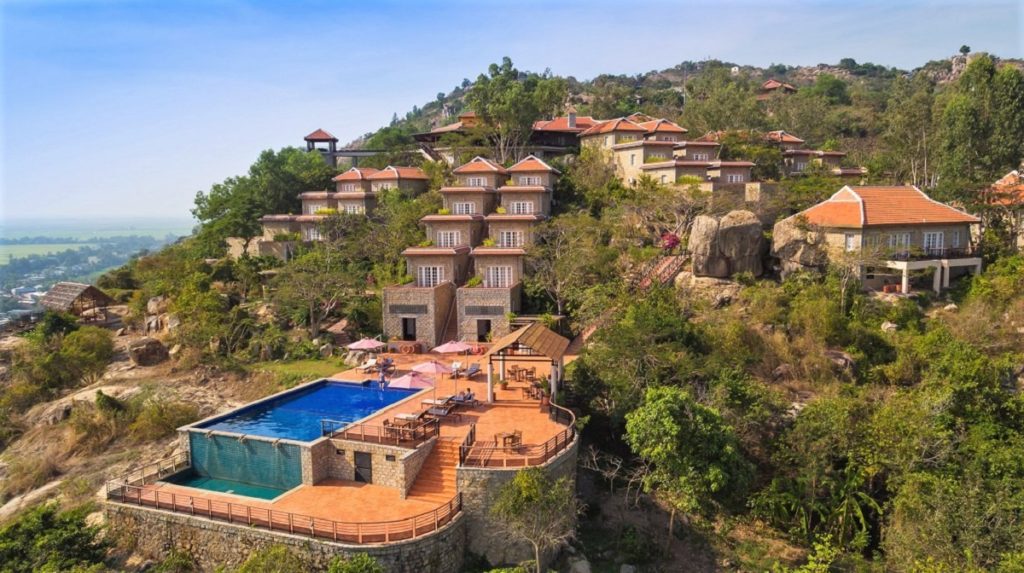 On the banks of the Hau River, Victoria Chau Doc or Victoria Nui Sam Lodge on Sam Mountain are two luxury resorts in An Giang that overlook verdant rice fields. Rooms cost from VND1.2 million a night.

HOW TO GET AN GIANG VIETNAM

From Hanoi visitors can fly to the Can Tho Airport. From the airport, it’s a three-hour drive to Chau Doc.

After the HCMC-Trung Luong Expressway opened to traffic in 2010, the road from HCMC to Mekong Delta provinces has become easier. 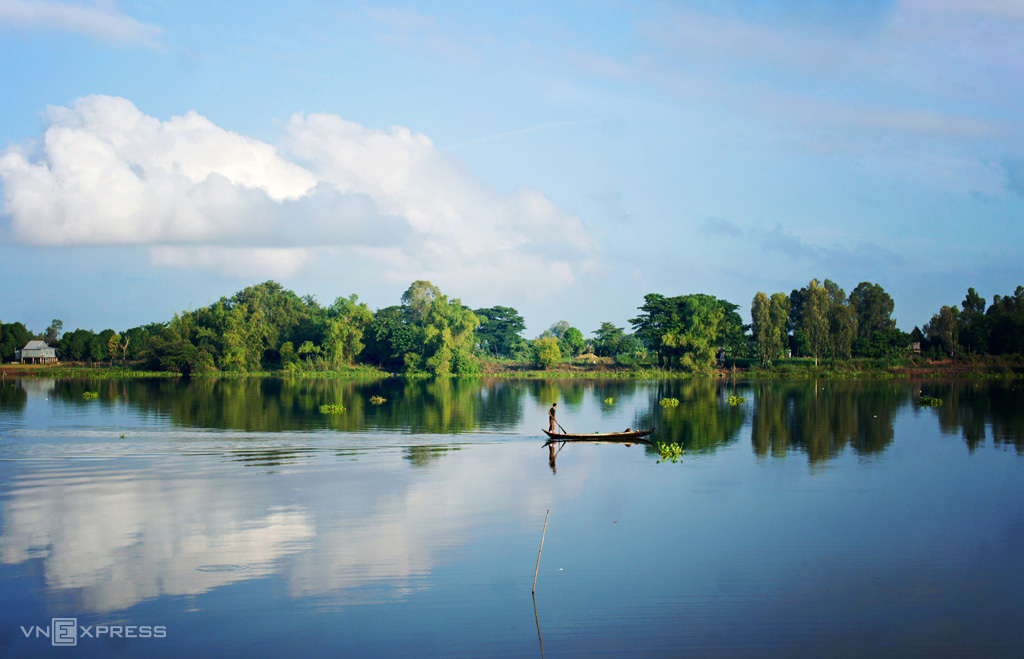 THE BEST THINGS TO DO IN AN GIANG VIETNAM

The Lady of the Realm Temple at the foot of Sam Mountain, around six kilometers from Chau Doc Town, has been a spiritual site for generations of Mekong Delta residents. 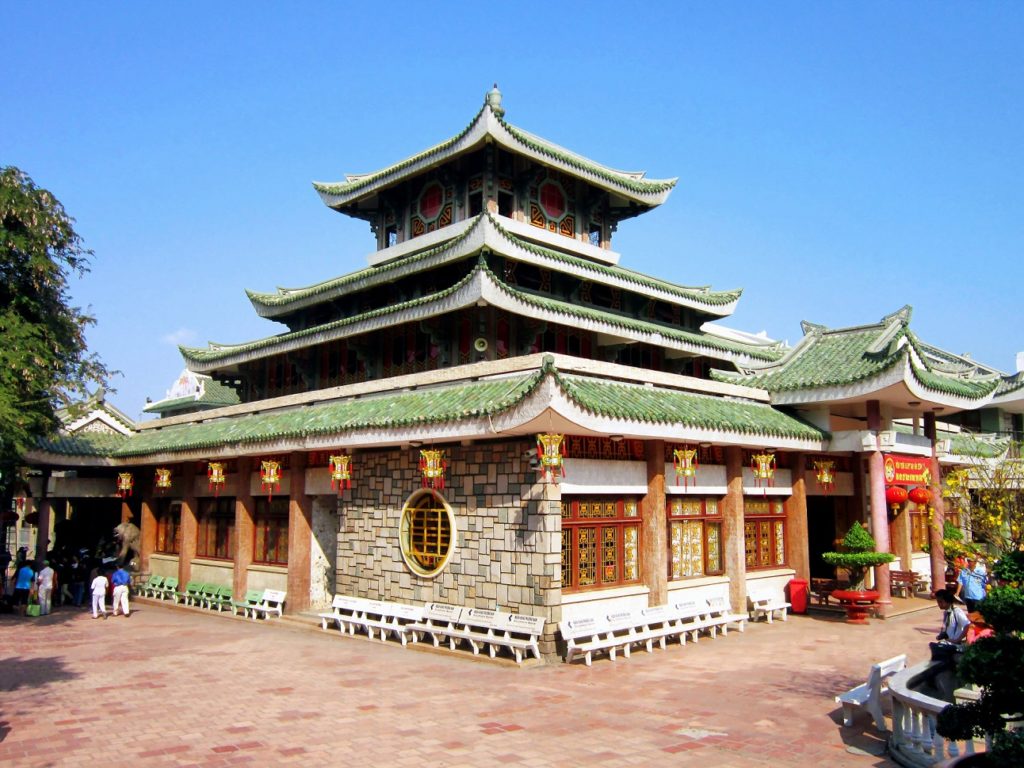 The protector deity has become even more popular in southern Vietnam since the 1990s. Millions believe that the Lady of the Realm blesses the devout with business success, health and fertility.

The deity and her temple’s rising popularity has been a blessing for local residents. The road leading to the temple is now dotted with an array of budget motels, hotels, food stalls and shops that specialize in selling offerings for the deity.

Bao Hoa, owner of a motel in Chau Doc, said the peak tourism season in the area is from the Lunar New Year festival until the end of April. Most hotels and budget motels here are overcrowded during this period.

“I started my motel business seven years ago as the number of pilgrims kept increasing. Most pilgrims choose to hire motels at cheap prices and rest for several hours before visiting the Lady’s temple to burn incense and pray,” Hoa said.

A unique ritual to witness here is that of businessmen and traders “borrowing money from the Lady” while praying for their efforts to bear fruit. They will return to the temple at the year-end and make offerings to the Lady and repay a debt of gratitude.

Another spiritual site in Chau Doc is the Phuoc Dien Pagoda, also called the “Snake Pagoda” by locals.

Just around five kilometers from the Temple of the Lady of the Realm, the pagoda was first built by a local woman who struggled with family crises and decided to spend the rest of her life engaged in Buddhist practices. 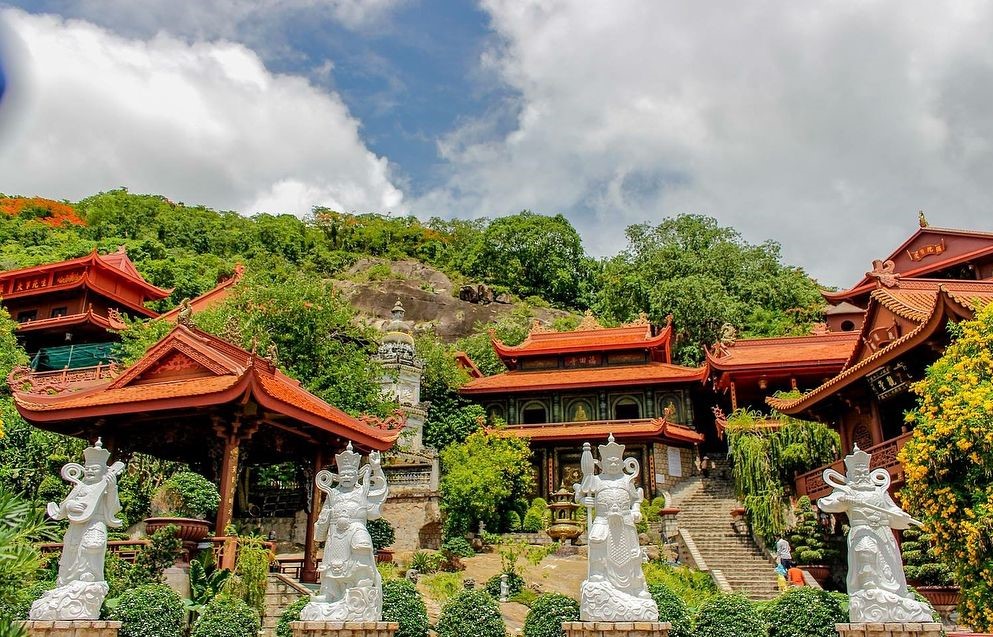 The pagoda features typical Vietnamese architecture with brick red tiles and curved roofs. Inside the temple there is a main hall with Buddha statues and two caves, the first of which is said to have housed a pair of large snakes that are believed to have subsisted on vegetarian food and listened to prayers.

This cave is today barricaded for about 10m for safety reasons. The statues of two snakes inside the cave are still worshipped.

From the entrance gate one needs to climb to a height of about 300 meters to get to the temple. “It’s a fairly steep climb, but there are lots of stops along the way with beautiful views of rice fields while looking towards the Cambodia border which is not far,” John from South Africa wrote on Tripadvisor.

A crescent moon and a five-pointed star atop its dome signify that it is an Islamic monument. Like other mosques, the interior is simple and almost empty, helping the faithful to focus on prayers. 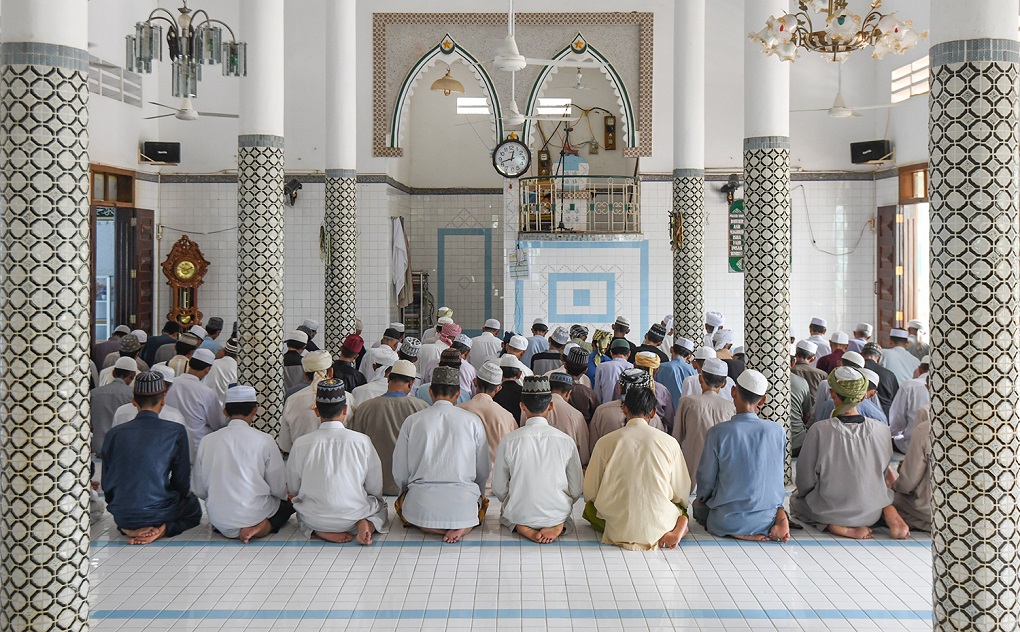 On a two kilometer stretch of the Hau River, the Long Xuyen floating market remains a repository of traditional culture and lifestyle.

To see the floating market at its busiest, visitors need to be up early. The market gets very busy from 5 a.m. onwards as hundreds of boats gather to trade agricultural produce including fruits, vegetables, flowers and fish. 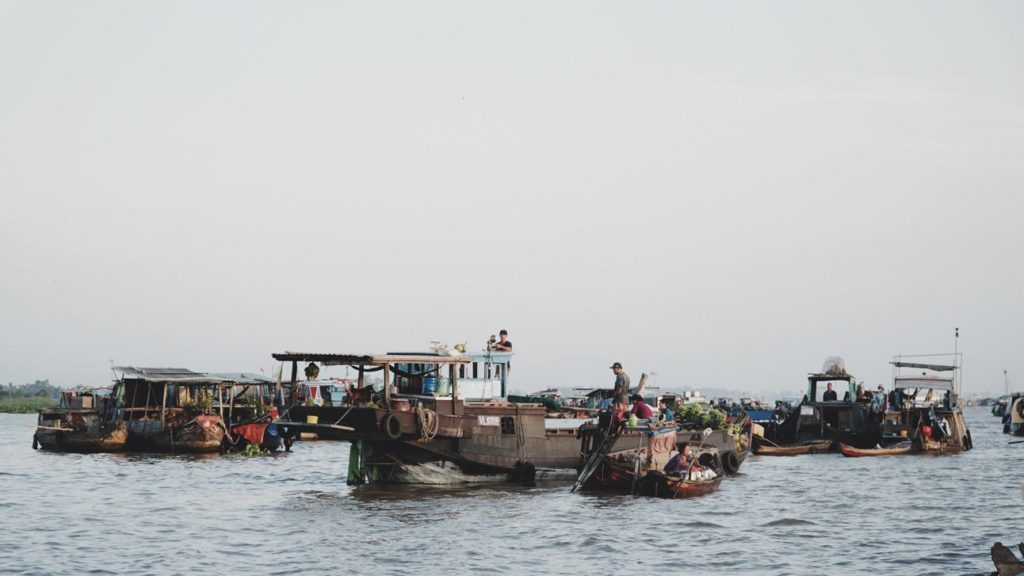 The best way to explore the daily waterway life of Mekong Delta residents is to hire a boat and get close to the action as traders strike bargains.

A visit to the floating market gets memorable when partaking of breakfast dishes like banh tam bi (Vietnamese thick noodles with coconut cream) or bun thit nuong (rice noodles with charcoal grilled pork on skewers) served by boat vendors.

Around 50 kilometers from Chau Doc Town, the Ta Pa Mountain in Tri Ton District, one of seven mountains in An Giang that locals refer to as That Son, is surrounded by forests of palmyra palms and rice fields. During the harvest season, the rice fields become a soft, wavy yellow carpet adorned by the palms, attracting hordes of photographers, pros and amateurs alike. 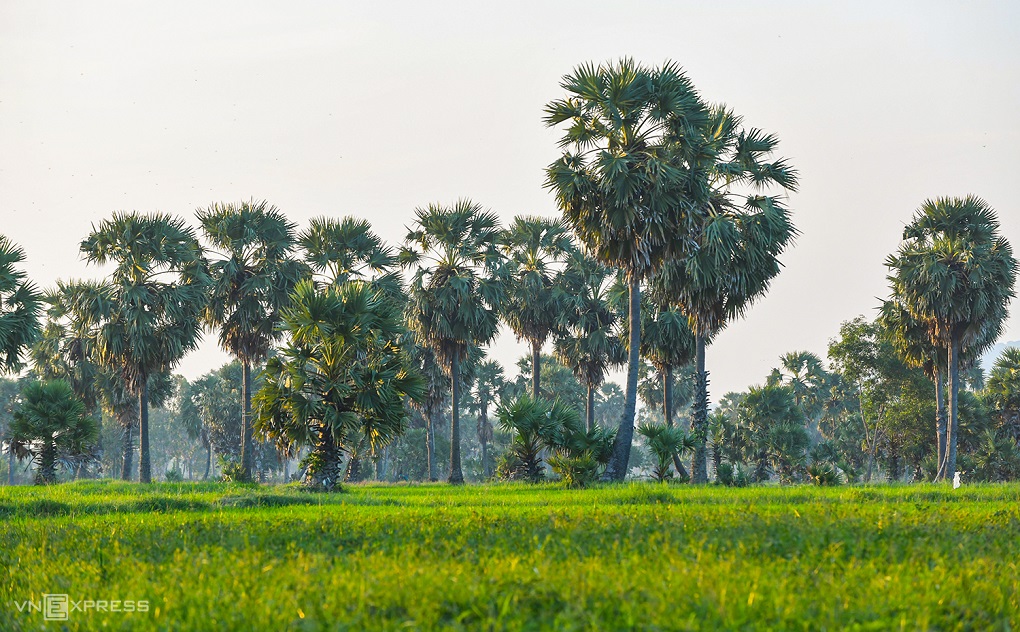 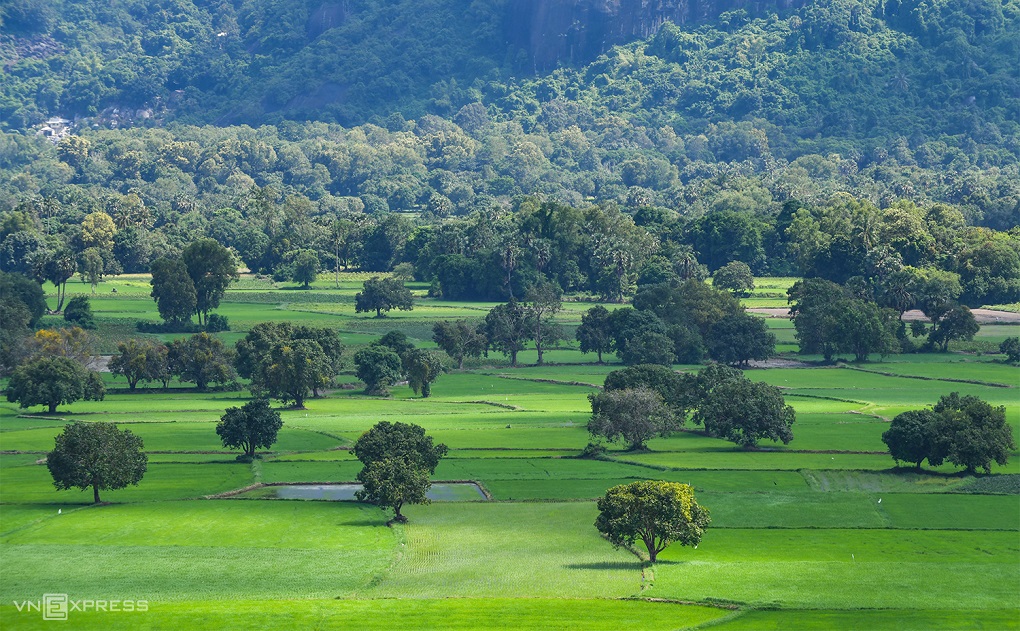 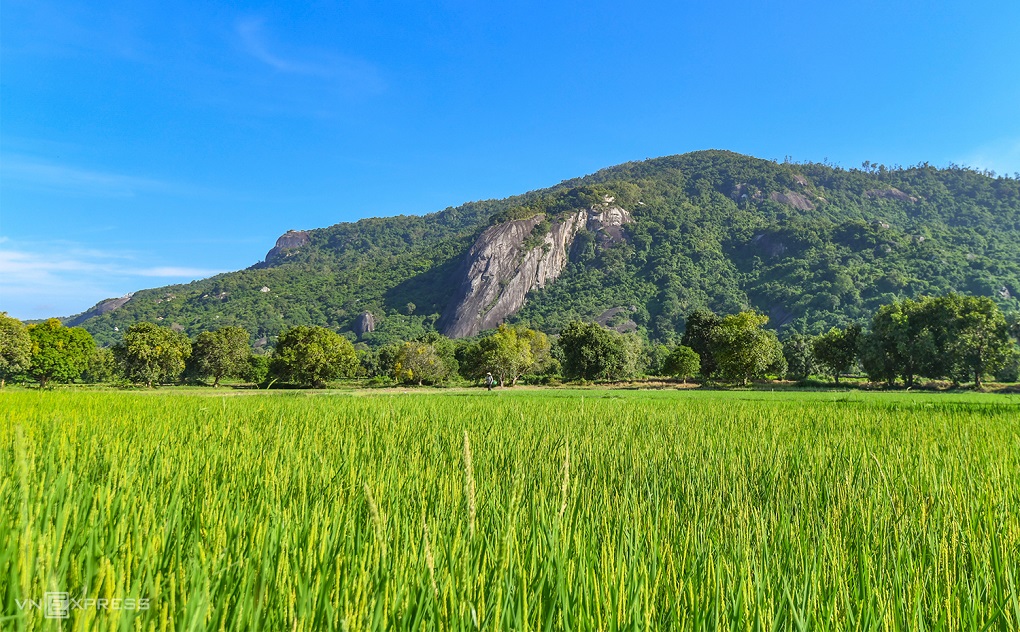 The area is also home to a Theravada Buddhist pagoda that was built in the Khmer style.

The road to the top of the hill is quite bad and difficult so it can only be reached by motorbike or on foot.

An emerald green lake next to the mountain adds the natural glitter. 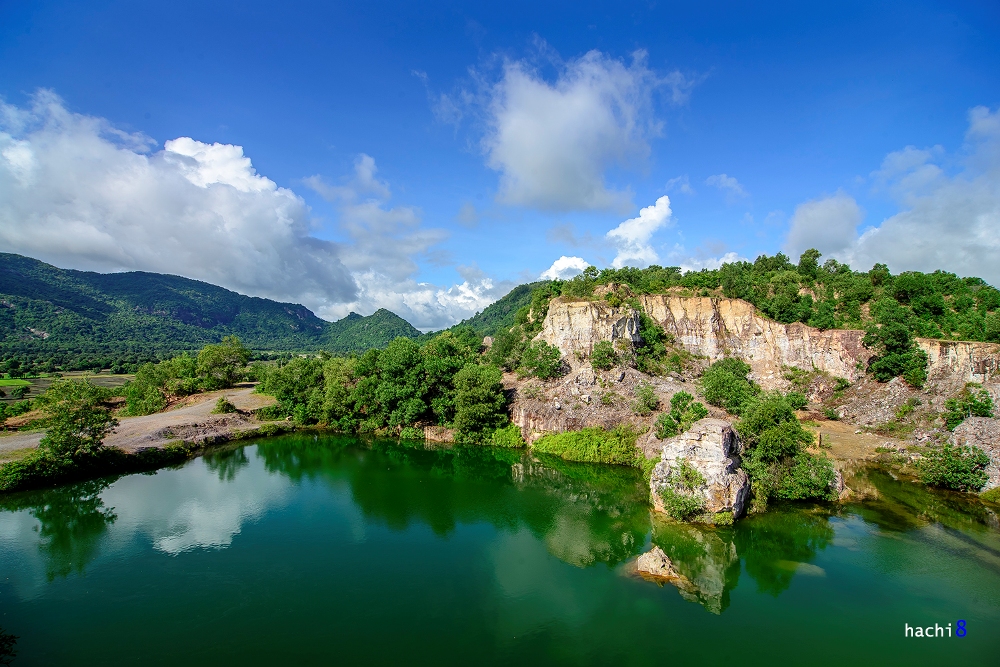 During the flooding season between September and November, a boat ride through the Tra Su cajuput forest covered with green water-ferns in Tinh Bien District, around 26 kilometers (16 miles) from Chau Doc, is another special feast for the senses. 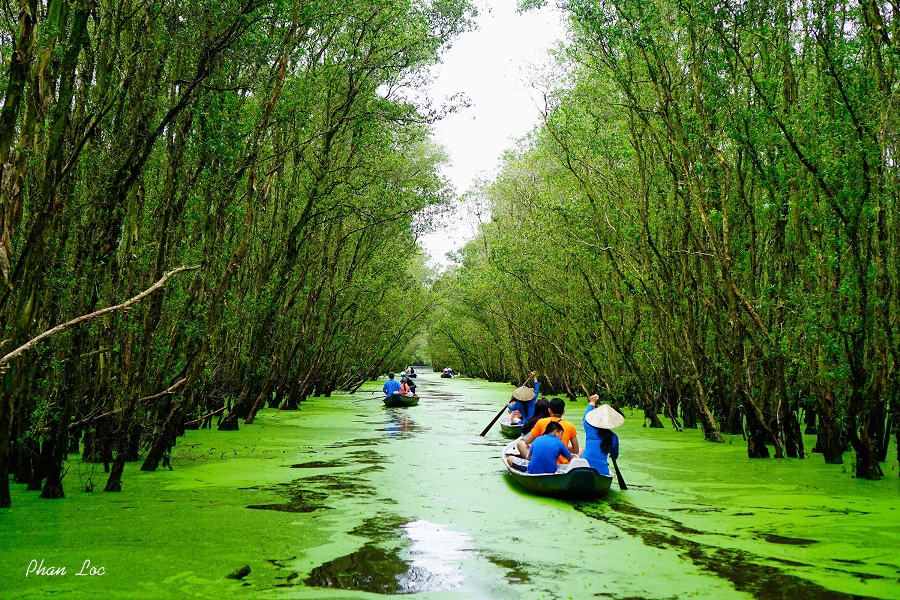 A trip in Tra Su typically starts with a composite motor boat, that departs from a pier in the forest and goes through the cajuput forest for visitors to admire the lush greenery including lotus and water lilies. Then visitors are transferred to a small wooden rowboat that makes its way through green duckweed deeper into the forest for around 30 minutes.

Tra Su is home to 140 plant species and more than 120 species of water birds, bats, reptiles, animals, and fish, many of them rare and endangered and a few listed in the Red Book. 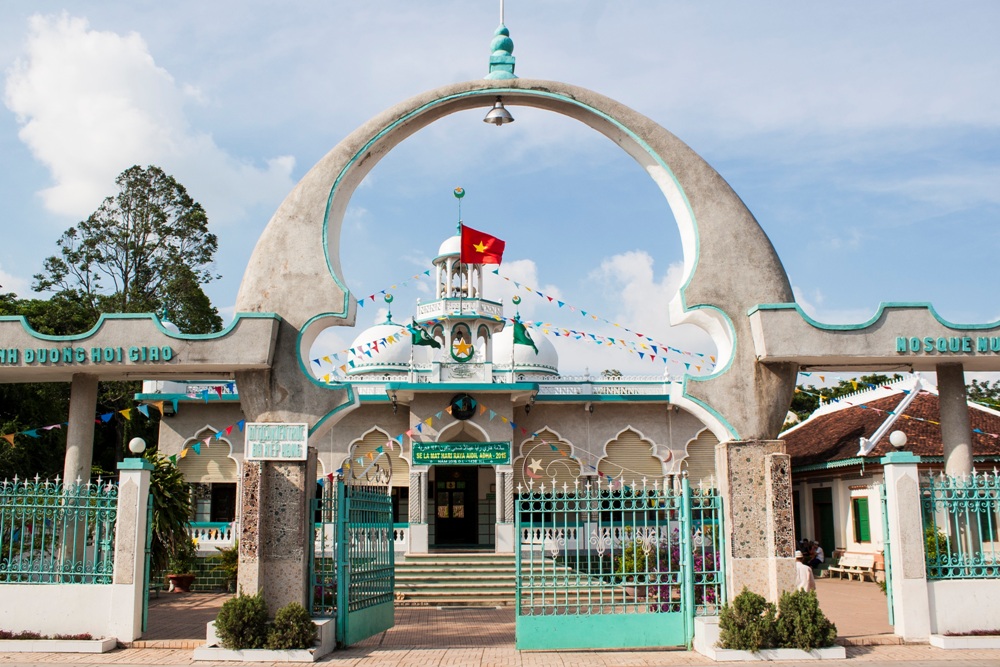 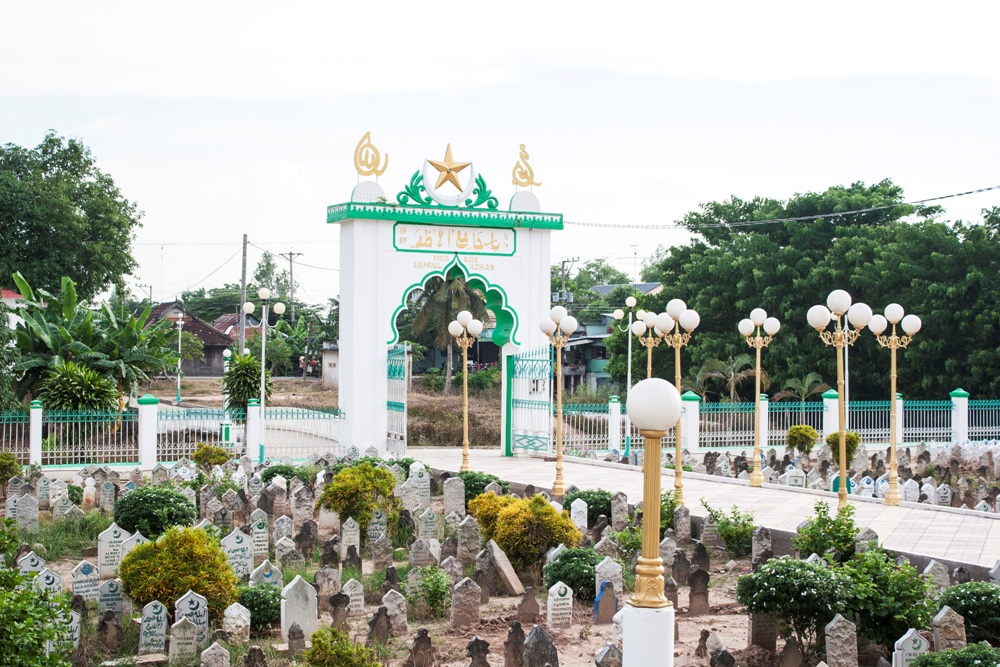 The Cham village of Chau Giang is about 10 minutes by ferry from Chau Doc Town.

An Giang has nine Cham villages with about 5,000 households. A distinct local feature is Islamic architecture, including large mosques.

The Chams have three major holidays according to the Islamic calendar: Roja on December 10th; Ramadan from September 1-30; and Muhammad’s birthday on March 12.

The main occupations of the Cham people in An Giang are trading, weaving, fishing and farming. 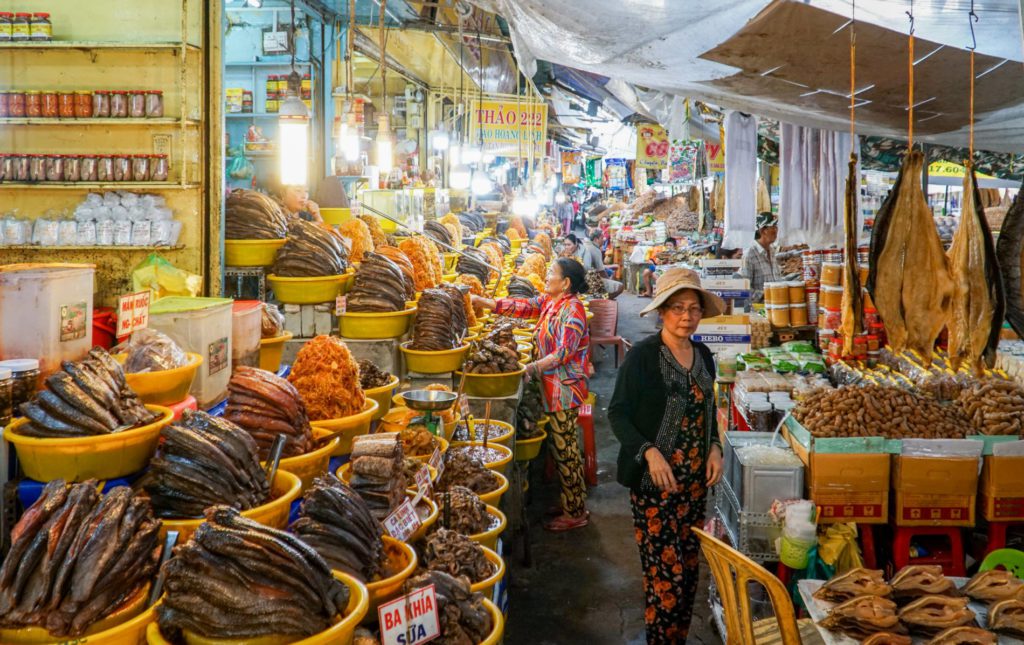 Chau Doc and Tinh Bien are the most popular markets in the province, mainly selling Mekong Delta specialties like fish sauce and salted and dried seafood.

Bun ca Chau Doc, or Chau Doc fish noodle soup, originated in Cambodia before people in the Mekong Delta tweaked it to fit their taste. Now it can be found almost everywhere in Chau Doc.

The main ingredients are snakehead fish, broth and noodles. After cleaning and boiling the fish, the ch 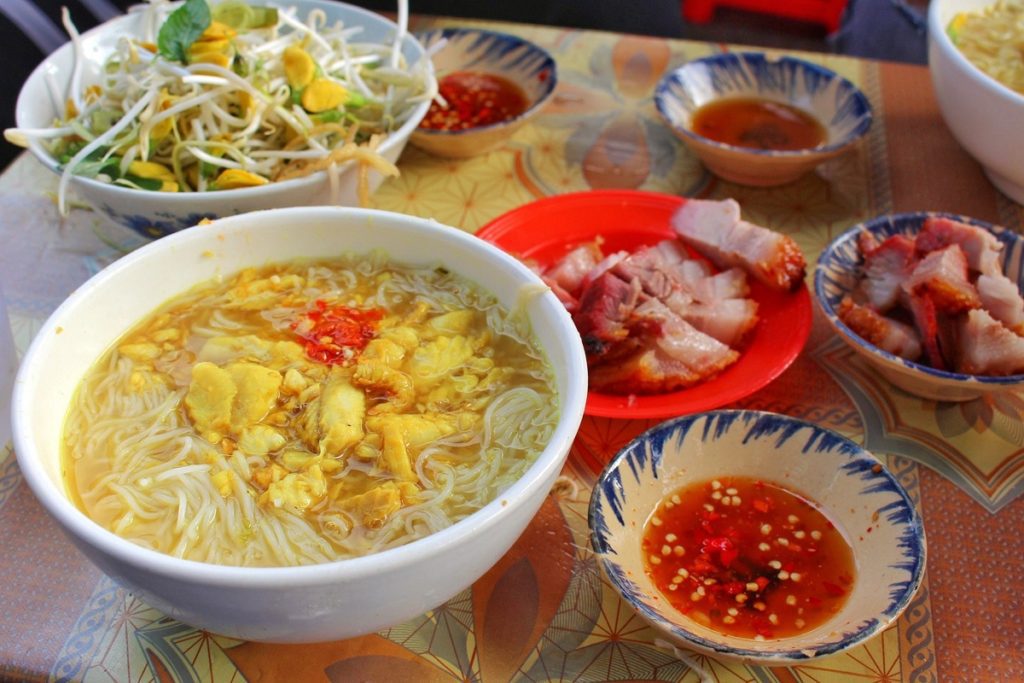 ef fillets it, marinates it with spices and fries it briefly on a pan with turmeric to give it a golden color and nice aroma.

The success of the dish lies in the broth that is made with fermented carp, shrimp paste and pork or beef bones. It has a pale yellow color from crushed turmeric. Fried fish is added to enhance its flavor. 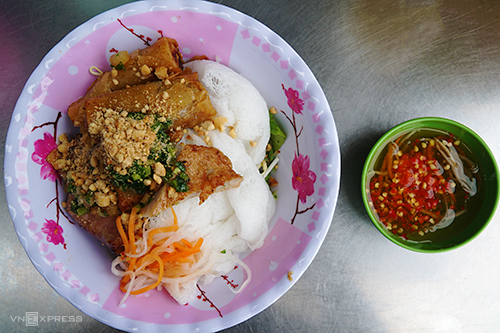 The dish that can be found at the Chau Doc Market is served with a plate of roasted pork and dien dien or sesban flowers from a plant that grows abundantly in the region. It has a unique aroma and subtle fatty taste.

Banh hoi is similar to rice vermicelli. It is most delicious when it is soft and covered with a thin layer of oil that removes the raw flour flavor.

The dish is topped with fatty onion and crushed peanuts. Some stalls add spring rolls and fish cakes to the dish. The dish is accompanied by a sweet and sour fish sauce dip.

Banh tam bi (thick noodles with coconut cream) is another popular street food in An Giang. The noodles are different across the Mekong Delta, depending on the type of rice available in the area and the noodle-making process. No one knows the exact origin of the dish but many people in the delta believe it originated from Bac Lieu Province. 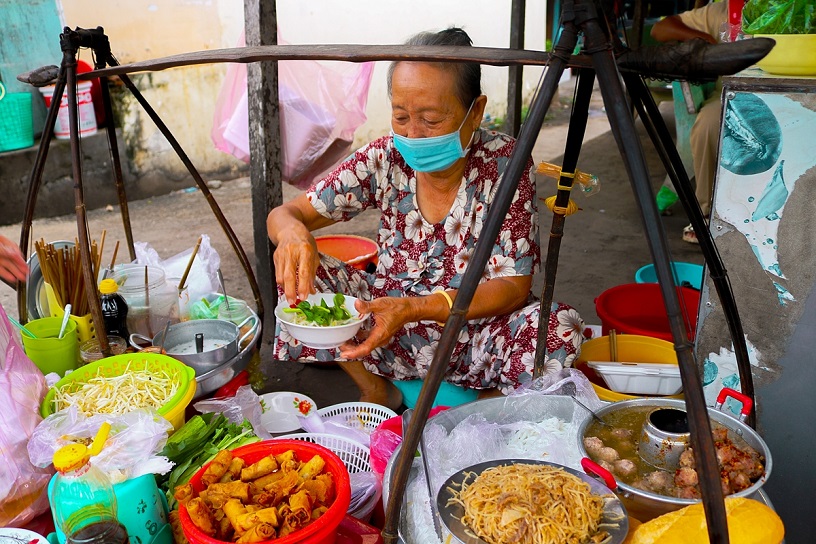 The protein component of the dish is a mix of lean pork sliced into thin strips, shredded pig skin and thinh, a fragrant powder made of toasted rice.

The soul of the dish lies in coconut cream cooked in a small charcoal pot and served with a little salt, sugar and tapioca flour (or cornstarch).

The dish can be enjoyed at a stall on Le Minh Nguon Street in Long Xuyen Town or a street-side eatery near the Long Hung crossroads in Tan Chau Town.

Chau Doc is the kingdom of salted seafood and fermented fish; therefore, lau mam (fermented fish hotpot) is also a must-try dish. The broth is made with fermented fish paste and seasoned with sugar, minced lemongrass and green onion. 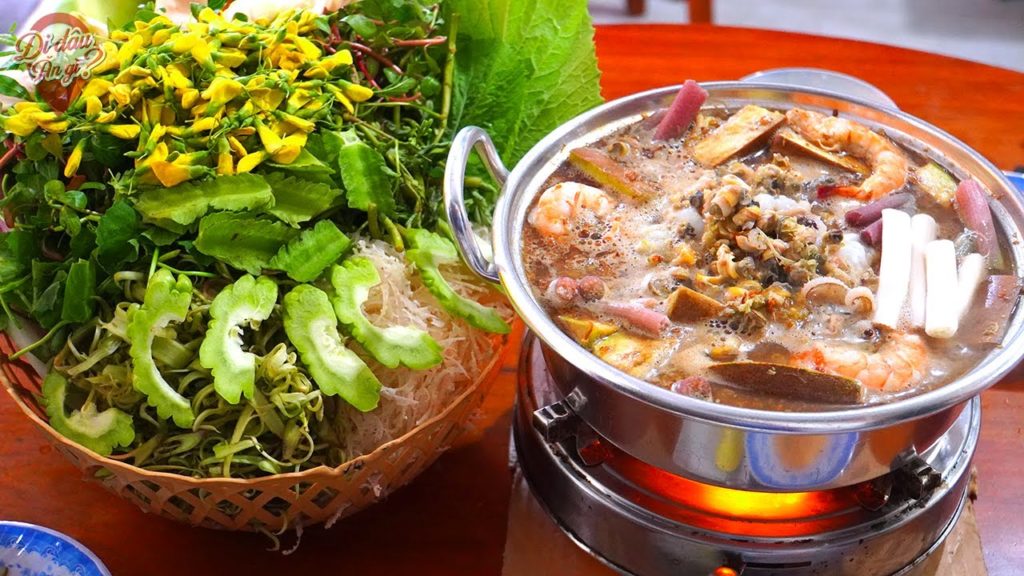 To further enhance the flavor of the dish, shrimps, squids, and roasted pork are added. The hotpot is served with herbs including water lilies, banana flower, water spinach and a small bowl of dipping sauce with lemon juice and minced chili and lemongrass. 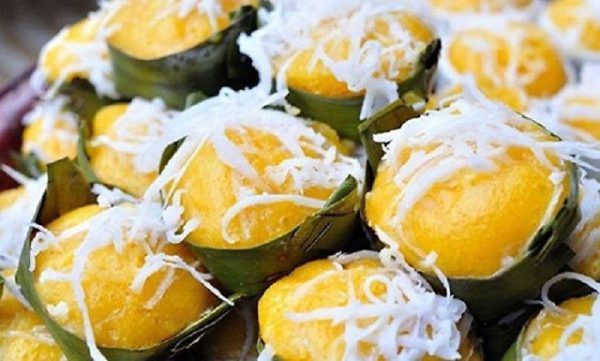 Some places to try this dish are the Sam Mountain hotpot restaurant and Bay Bong 2 restaurant.