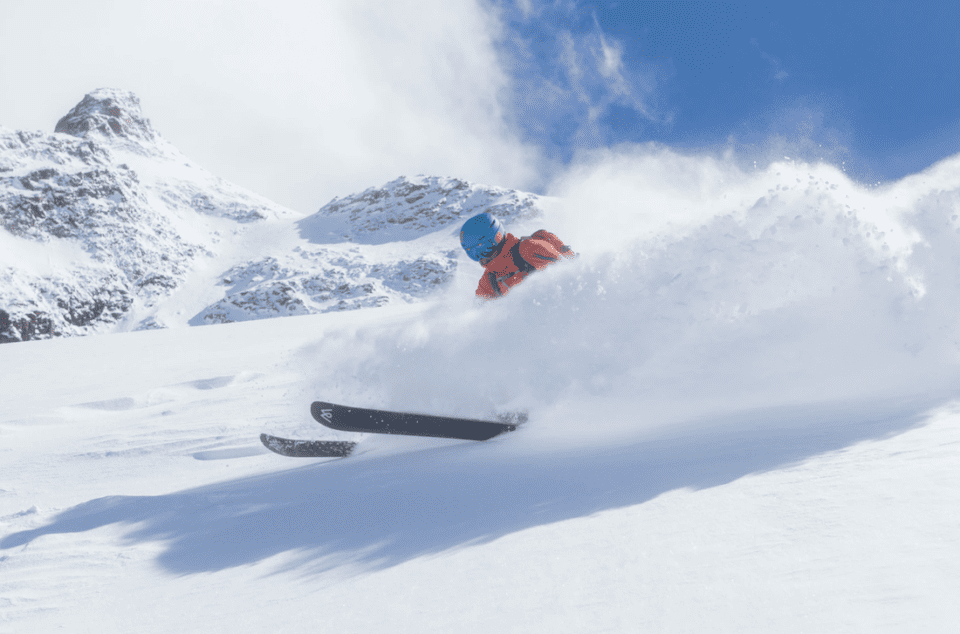 In 1988, the Atomic Ski Company engineer Rupert Huber was asked to make a powder ski that could float on top of fluffy snow better than the average ski. At the time Atomic had gotten into snowboard production and the engineer decided cutting a snowboard in half and tinkering around with the edges could do the trick. Thus, the world’s first superfat powder ski, the Atomic Powder Plus, was created.

Decades later fat skis are still a top choice for ski enthusiasts on powder days, but what happens when the infatuation with fat skis becomes your daily driver? Dr. Kim Hewson, a professional in the industry refers to this as ‘Fat Ski Syndrome,’ and the doctor turned ski instructor has spent a good amount of his second career educating the general and professional ski public about the dangers of misusing fat skis.

While Hewson deems himself a “Ski Nerd,” the 88-year-old has a rich history of understanding the body and how it works when engaged in sports more specifically on snow. A lead instructor and staff trainer at Telluride Ski and Snowboard School, he spent the majority of his career as an orthopedic surgeon, a career that spanned a wide range of disciplines from Director of Sports Medicine at the University of Arizona to a part-time consultant to the U.S. Ski Team before learning to ski at the ripe age of 30.

Fat skis are still a top choice for ski enthusiasts on powder days, but what happens when the infatuation with fat skis becomes your daily driver?

A good base of the skills that Dr. Hewson has brought to the ski school revolve around dynamic and scientific data that can assist in body alignment and movement reducing the risk of injury. Known as biomechanics this science-based method puts an emphasis based around anatomy with skiing – think skeletal alignment and efficiency methods that allow muscles to do less work than needed helping to lead to optimal performance. It was in using and teaching these techniques of instruction that Hewson stumbled across the idea of fat skis being used ineffectively. Thus, this idea of ‘Fat Ski Syndrome,’ a concept around how using fat skis in the wrong snow and terrain setting can be detrimental to one’s legs evolved in 2014.

“I was finding that some of the instructors were going for powder runs in the morning then having afternoon lessons on blue runs and complaining of knee pains,” says Hewson. It took him nearly a year of playing investigator to find the culprit—fat skis. He was noticing bilateral medial knee pain amongst skiers using fat skis on groomed or firm terrain and the reasoning came down to the fact that they were using the skis inappropriately.

Hewson explains how fat skis were designed for flotation in powder and how when put on groomed or hard pack terrain it requires an action of tipping the foot that puts a powerful strain on the knee causing tendonitis or bursitis which when continued for long periods of time can have chronic effects.

Looking at the issue from afar the argument seems to make sense, however some in the industry may see it a bit differently than Hewson, like shop bum and gear tester, Jason Layh. Layh has spent over a decade at Alpenglow Sports in Tahoe City, California, and has been testing ski and backcountry gear for nearly two decades.

“It seems a bit harsh,” says Layh on the singling out of powder skis, “powder skis are very different than when they first came out,” says Layh as he mentions how some modern-day powder skis are built tip to toe with rocker making them easier to turn. While he sees the connection and agrees that continually skiing on fat skis in the wrong conditions can have detrimental effects on the body, he sees that in skiing as a whole. “In skiing we are moving fast and impacting our body in many ways,” says Layh, “too much of anything can be a challenge, it is all about finding a happy medium.”

Layh sees many factors that can play role in lower extremity issues aside from using fat skis in hard pack or on groomers, he says certain changes like improving a skier’s setup through foot beds and canting – a process of adjusting and tilting the foot in the boot to help set it to a neutral position can make a big difference. However, Layh sees the biggest challenge with ski selection at a socioeconomic level. “Skiing is continuing to get more expensive,” he says, “for weekend warriors what the purpose of having more than one set up…most people are buying skis with the ideal conditions in mind and aren’t putting that many ski days in throughout the season.”

Unfortunately for the skier ideal conditions are not always present and ski prices are not exactly ideal on top of that. According to the National Ski Areas Association (NSAA) in the past two seasons the average season pass holder skis 7 to 9.8 days throughout the winter and spring. On top of that prices of new skis can range from around $400 to upwards of $1000 which often doesn’t even include the bindings. The categorization of ski style type can change pricing and also vary amongst the different types of brands.

To get a general idea ski width is a measurement taken underfoot at the waist of the ski. Race and GS Skis tend to be thin at 60mm-70mm. From there they move up a little wider for beginner and intermediate skis, to a little wider for groomers all the way up to All-Mountain type skis at 90mm-108mm, and powder skis usually ranging from about 105 on up to 130mm—sometimes even wider. Hewson is wary of skiers who only use skis wider than 100 mm underfoot.

As much as one could look into the anatomy and kinesiologic nature of skiing what it really comes down to is having a quiver of skis that are appropriate for the right conditions. Practicality also must be taken into consideration.

Taking a lesson from Hewson’s page, “use them where they work,” he says.

The Science Behind Aesop’s Menagerie of Wild Animals