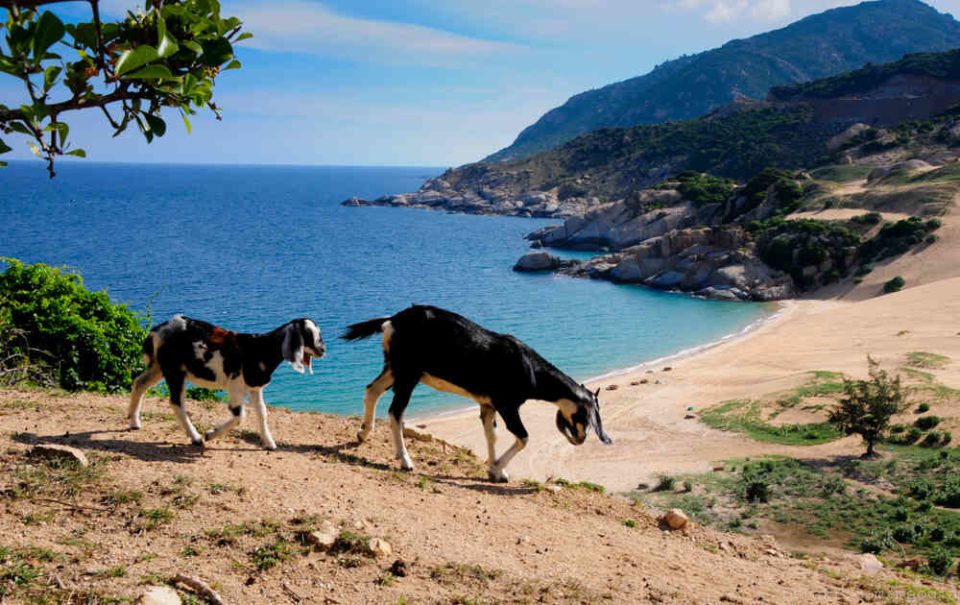 If you are planning your ideal trips to Vietnam , you can’t miss Ninh Thuan. Let’s read this post to refer to travel experiences and the best things to do in Ninh Thuan Vietnam. Ninh Thuan is known as Vietnam’s driest province with the least rainfall and therefore a hot place with harsh weather conditions. However, this appearance can be deceptive.

The province is home to a host of attractions including a world biosphere reserve, Cham Kingdom heritages and beautiful sand dunes.

How to get Ninh Thuan Vietnam in 2022

From Hanoi, you can book air tickets to Cam Ranh International Airport, which is just 62 kilometers away from Phan Rang.

Sandwiched between the two famous beach resort towns of Nha Trang and Mui Ne, Ninh Thuan can hold its own as a tourist attraction despite being hot all year round.

Those who are not accustomed to dry weather should visit the province between late August and September.

Between August and October, the province as its busiest, culturally, with unique festivals of the Cham people, including the “Kate Festival” held late September and early October to mark the end of one harvest season.

A 30-minute drive from Phan Rang-Thap Cham, the capital town of Ninh Thuan, the Nui Chua National Park is home to 765 animal species, of which 46 are on the Red List of the International Union for Conservation of Nature, including the red-shanked douc langurs.

Its efforts to develop eco-tourism activities and preserve endangered species have been praised by UNESCO which recognized it as a world biosphere reserve last year. 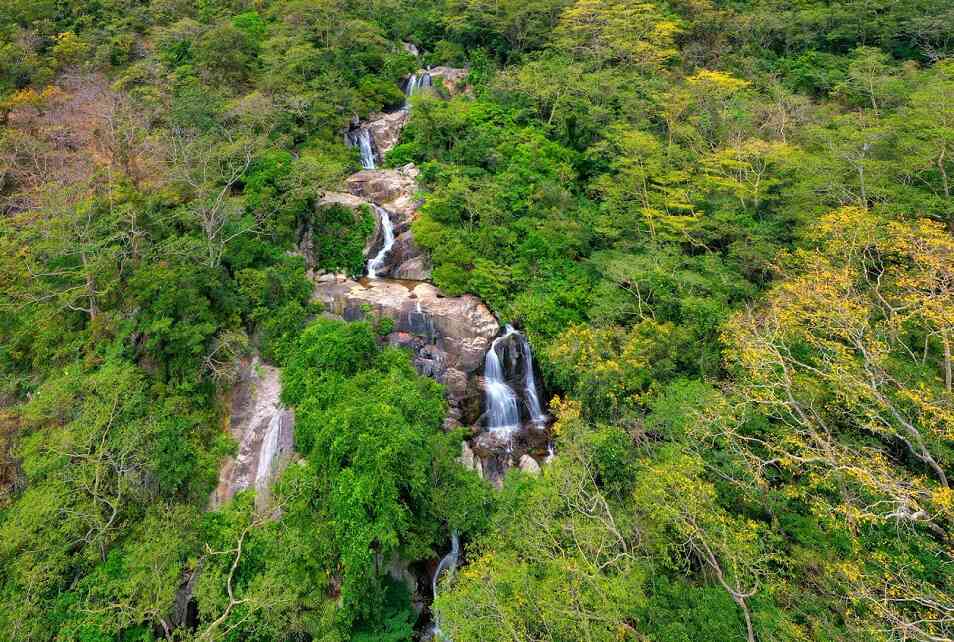 The national park only allows a few tourism activities including trekking and camping with limited tourist numbers.

However, trekkers need to register in advance with the management board of the park to ensure their safety.

The most popular trek here is from Hang Da Hamlet to O Liem River which normally takes three days. During the journey, visitors can pitch a camp in the heart of the forest and discover several unique cultural features as well as traditional wet rice farming methods of the Raglai ethnic minority community. 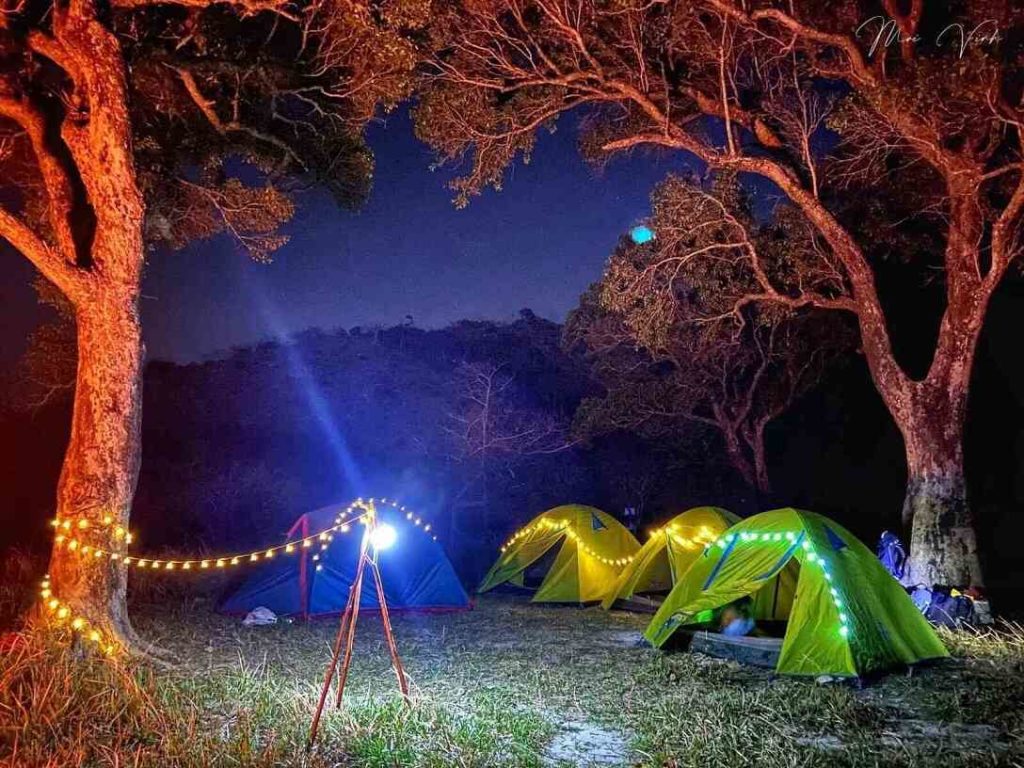 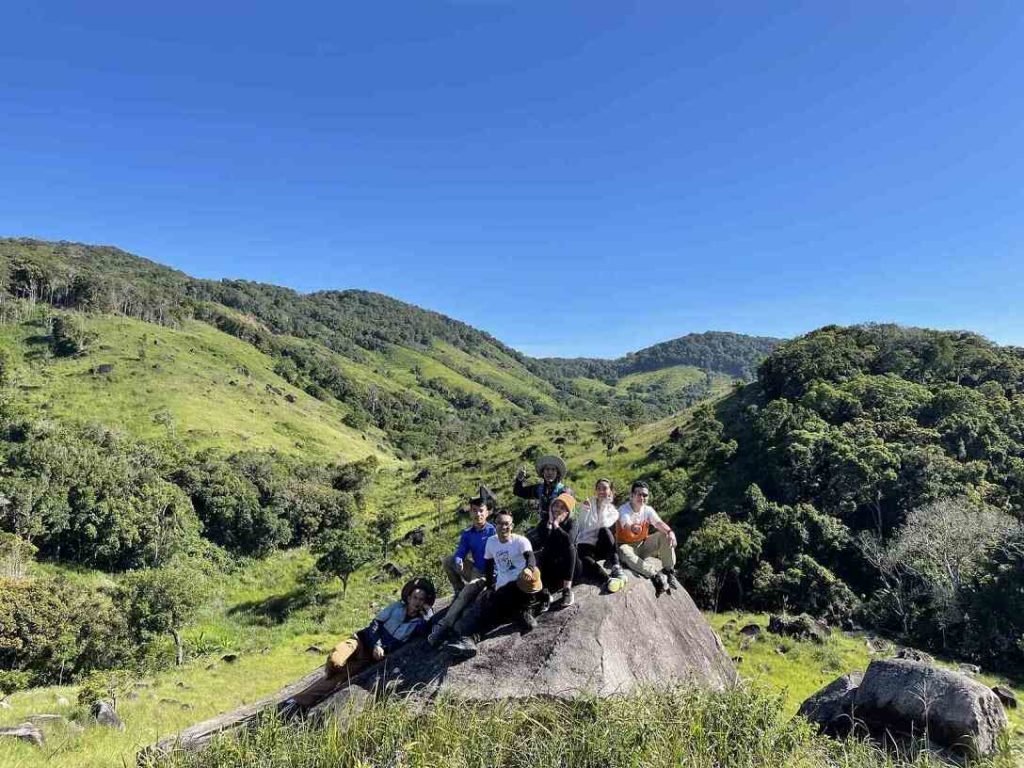 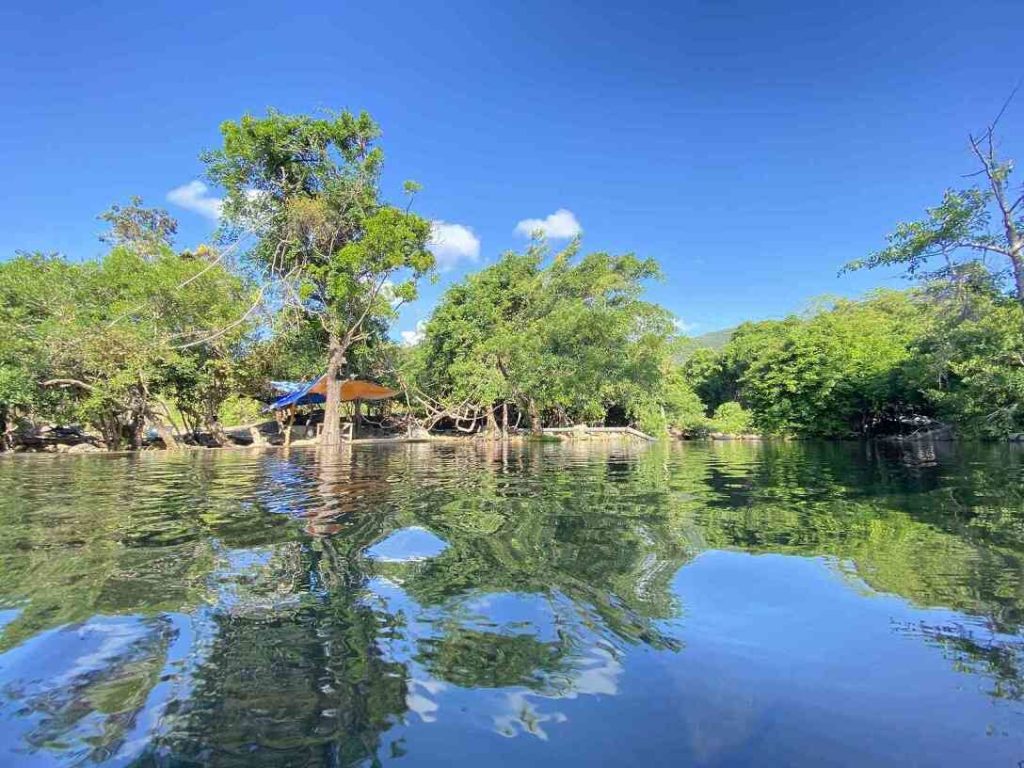 The trek ends at Nui Chua Mount at a height of 1,000 meters above sea level. This is a vantage spot to soak in the beauty of Vinh Hy Bay, one of Vietnam’s most pristine bays.

Mai Van Vinh, a Ninh Thuan native, who specializes in organizing weekend camping tours in the Nui Chua National Park and provides tent rental services, said it was hot all-year round in the park and the terrain was complex.

“It’s not easy for inexperienced travelers to go trekking here. Those with a history of heart and joint disease should not register for this adventure and expose themselves to unexpected dangers,” he said.

Nestled in the world biosphere reserve is the Rai Cave, a masterpiece of nature with rock formations stacked one on top of the other, creating numerous small, beautiful caves.

The cave gets its name from the fact that it used to host many species of otters (Rai). Inside, there are small caves with entrances so small that only one person can squeeze through at a time, which could explain why otters found them a convenient home. 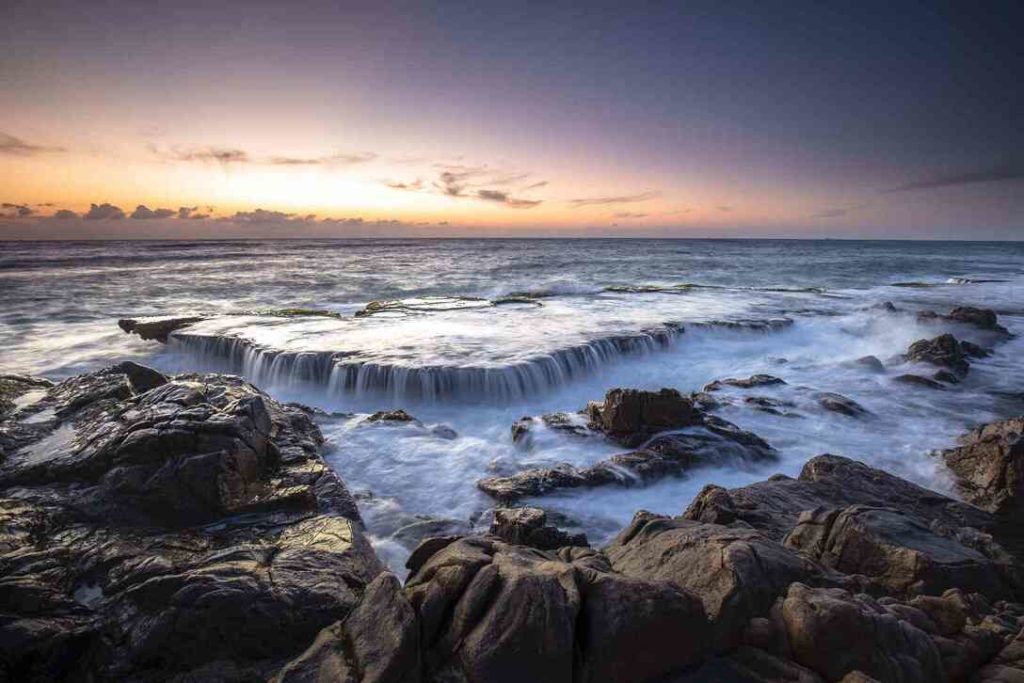 Rai Cave also features the largest ancient coral reef in Vietnam, only two to four meters deep, and easily reached by divers. The path to the coral reef, however, is quite challenging as tourists have to climb over the rocks to find their way down.

There are no tourism services here, but visitors can bring their own tents to camp overnight.

The Vinh Hy Bay is bestowed with sunny weather all-year-round so it can be visited at any time of the year.

However, for the best outdoor experiences, May to August would be the ideal time. 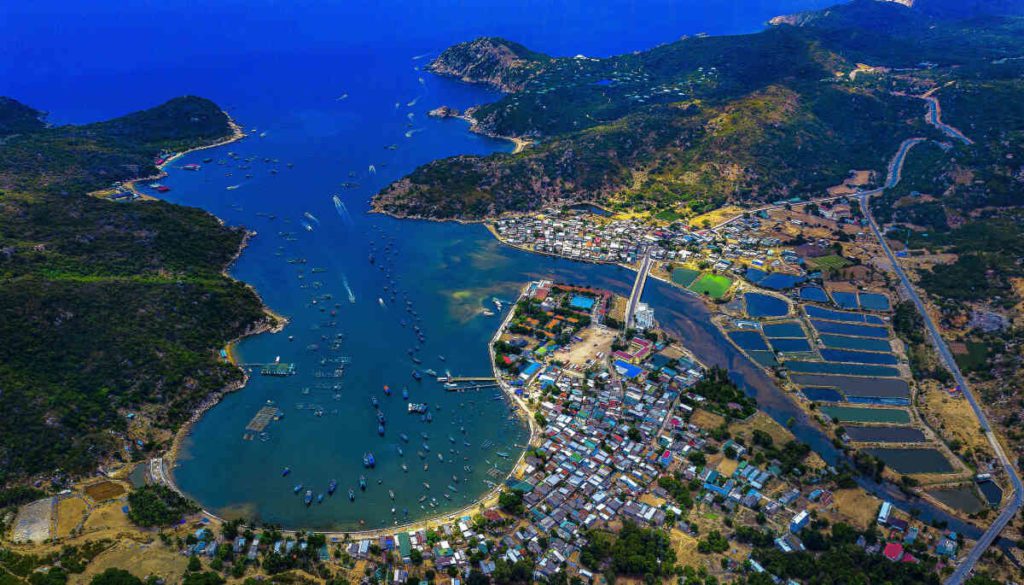 Taking a glass-bottom boat to watch the marine life and colorful coral reefs is a great experience here.

A one-day tour will take visitors to the Ca Ong Cape, Yen Cave and Turtle Islet and then the boat will stop by the coral reef preservation area that has more than 350 coral species.

From the boat, visitors can see sea urchins, starfish and other creatures through glass floors thanks to the bay’s crystal blue waters.

There is a small fishing village in Vinh Hy where locals have started offering homestay or fishing boat rental services. 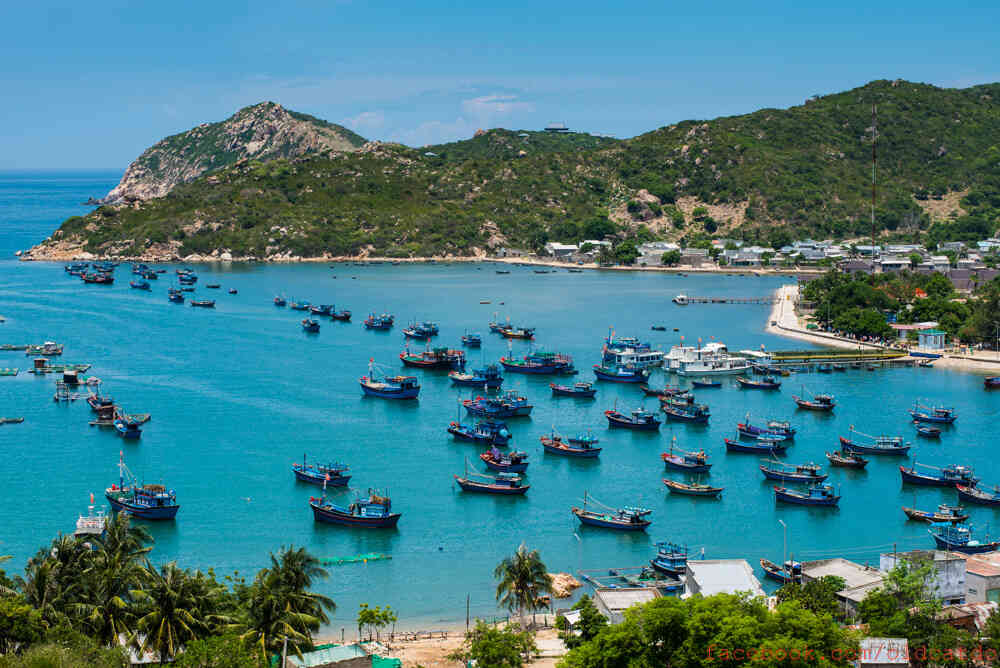 About 10 kilometers away from Phan Rang Town is Bau Truc, one of the two most ancient pottery villages in Southeast Asia, existing since the reign of Cham King Po Klong Garai (1151-1205).

Different from other famous pottery villages in Vietnam, the pottery products of the Cham people in Bau Truc Village feature a special method that has been passed down by their ancestors.

The potters place their product on a chair or a table and keep going around to shape it.

Bau Truc pottery is made with clay from the Quao River mixed with sand. The villages only collect clay once a year for about half a month.

All ceramic products in Bau Truc are handmade as artisans do not use a potter’s wheel to shape the clay. As said earlier, they walk around a clay block and design the product with skillful hands.

Among Ninh Thuan’s most important attractions are vestiges of the Champa Kingdom.

Just seven kilometers away from Phan Rang, the Po Klong Garai, considered the most majestic tower complex of the Cham people still standing in Vietnam, is an architectural masterpiece. The complex was built in Panduranga city, as the place was called during the Champa reign. 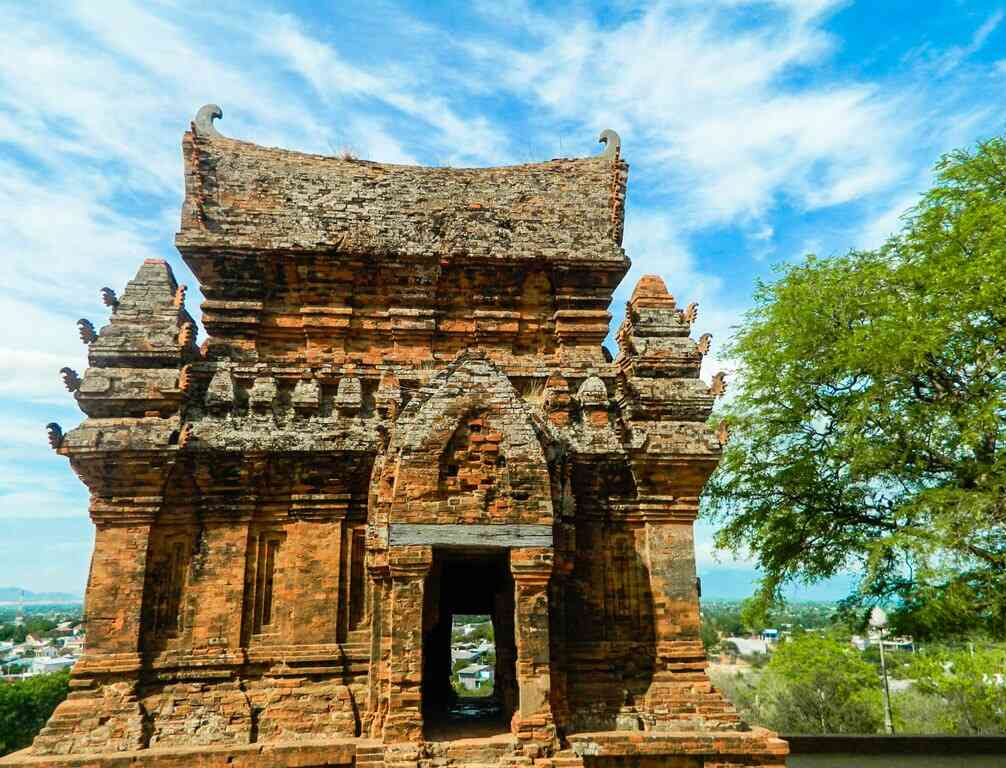 Today, the Cham people, who are a traditionally matriarchal society worshipping a female goddess and having the youngest daughter inherit family assets, gather at the complex every October to celebrate the “Kate Festival,” praying for a good harvest.

The week-long festival marks the Cham calendar’s de facto New Year at the onset of a new harvest. 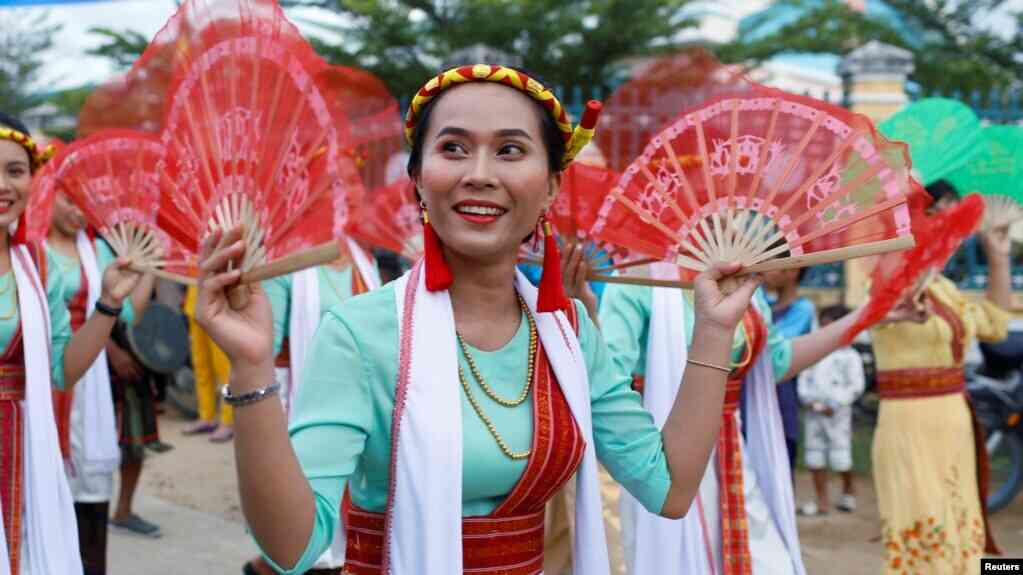 Despite the year-round hot and sunny weather, Ninh Thuan is known for its sheep population.

Brought to Vietnam by the French over 100 years ago, sheep farming has thrived in the province. Today the sheep population is estimated at roughly 100,000, primarily in the districts of Ninh Phuoc, Bac Ai and Thuan Bac. Ninh Thuan is nicknamed the ‘holy land’ of sheep. 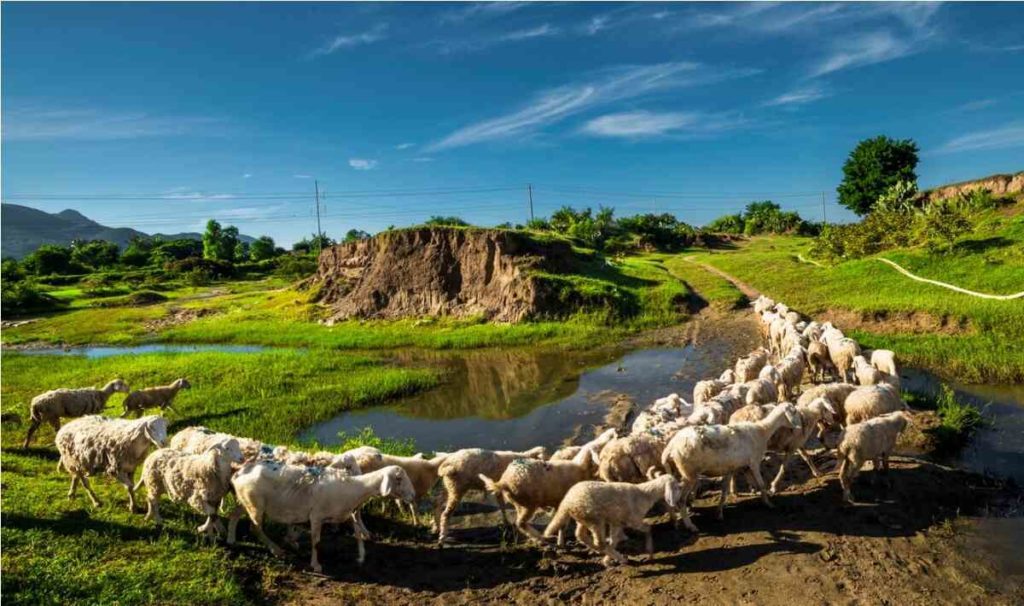 “Due to the hot weather, Ninh Thuan sheep are raised for meat and breeding only. Their layer of wool is sadly thin and does not receive great care,” said a local farmer, Dao Quang Lo.

“Initially, the sheep were brought to Vietnam to serve as offerings in traditional festivals of the Cham people. Through the years, the animal have adapted themselves to the tropical weather in one of the driest provinces in Vietnam and developed strongly since then,” he said.

Ninh Thuan is home to different ethnic groups and religions, some of whom abstain from pork and beef. They mostly cook sheep for parties, festivals and holidays.

The An Hoa sheep farm in Ninh Hai District has gained in popularity after it was featured in a music video featuring famous rapper Den Vau.

Normally, local shepherds take their flocks at around 8 a.m. to nearby hills where they graze on wild grass. This is the ideal time to watch the sheep and take arresting photographs.

Many of Ninh Thuan’s shepherds belong to the Cham ethnic minority. They are hired by rich families who own big herds.

The best time to admire the beauty of the sand dunes is between 5 a.m. and 7 a.m., when sunshine makes the sands glow golden. 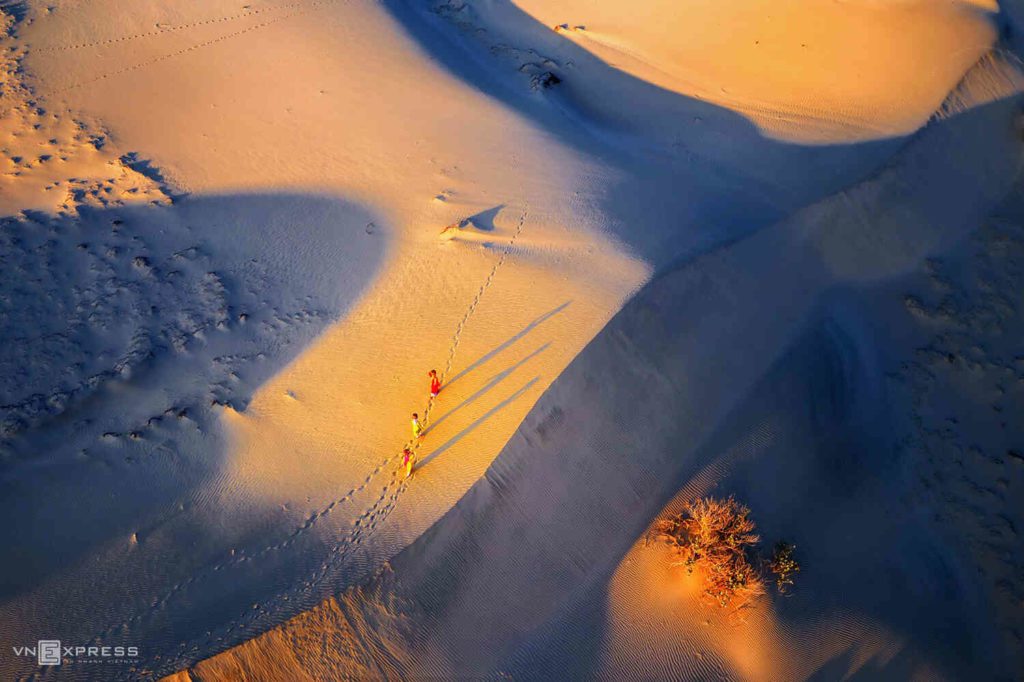 A special feature of the dunes is that their colors change depending on the angle of the sun or cloud cover.

Another feature of the Nam Cuong sand dunes is the sight of Cham women silhouetted on the soft sand as they carry jars of water on their heads, wearing their traditional dress.

The water trek by Cham ethnic women on the Nam Cuong sandhills at dawn has become a source of inspiration for photographers and several have won international awards for their shots of this spectacle.

Ninh Thuan is also a place to visit for its sandy beaches with turquoise waters. 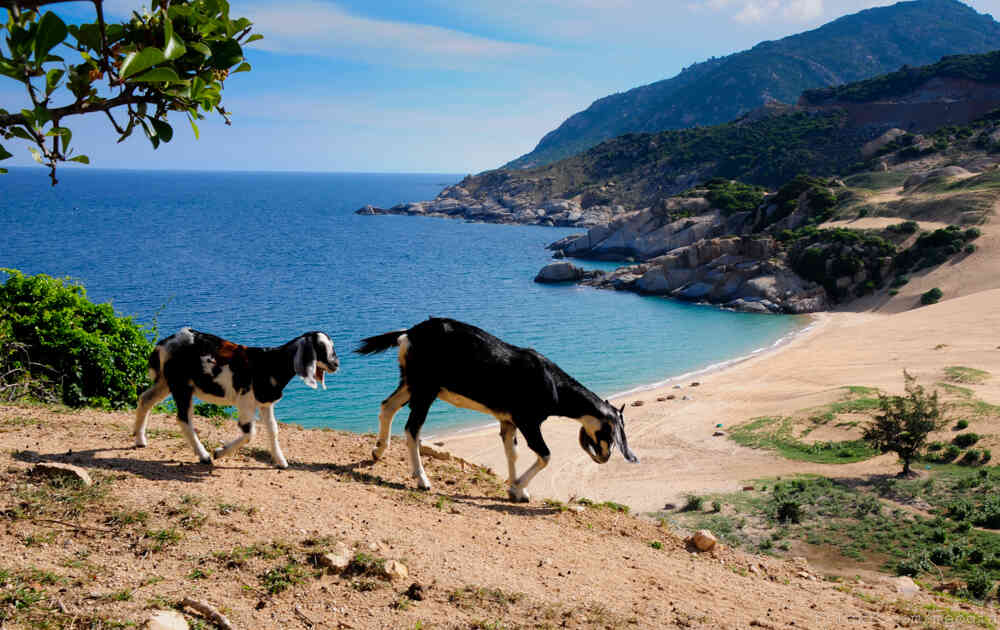 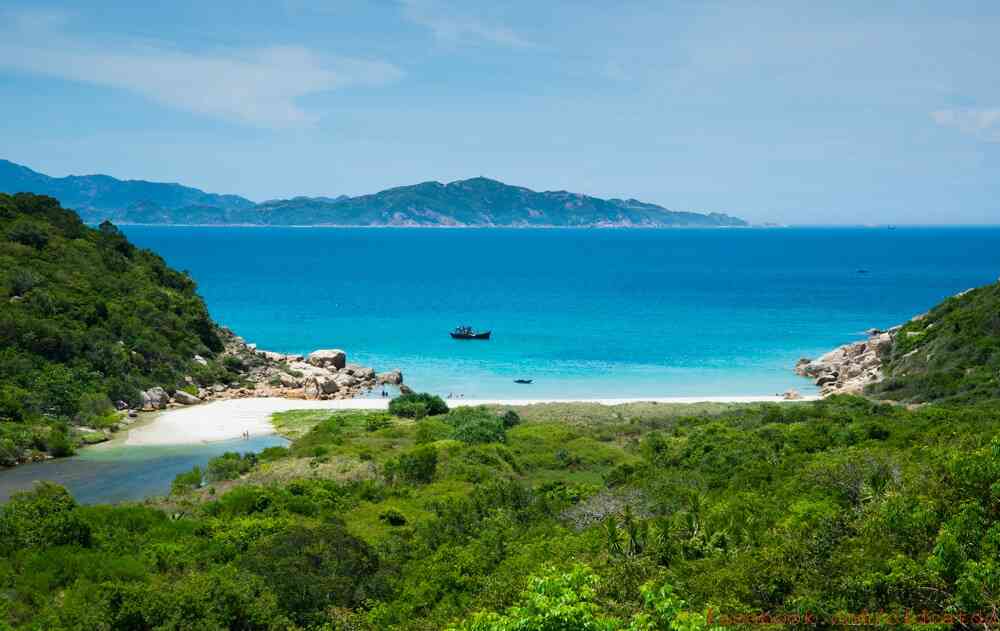 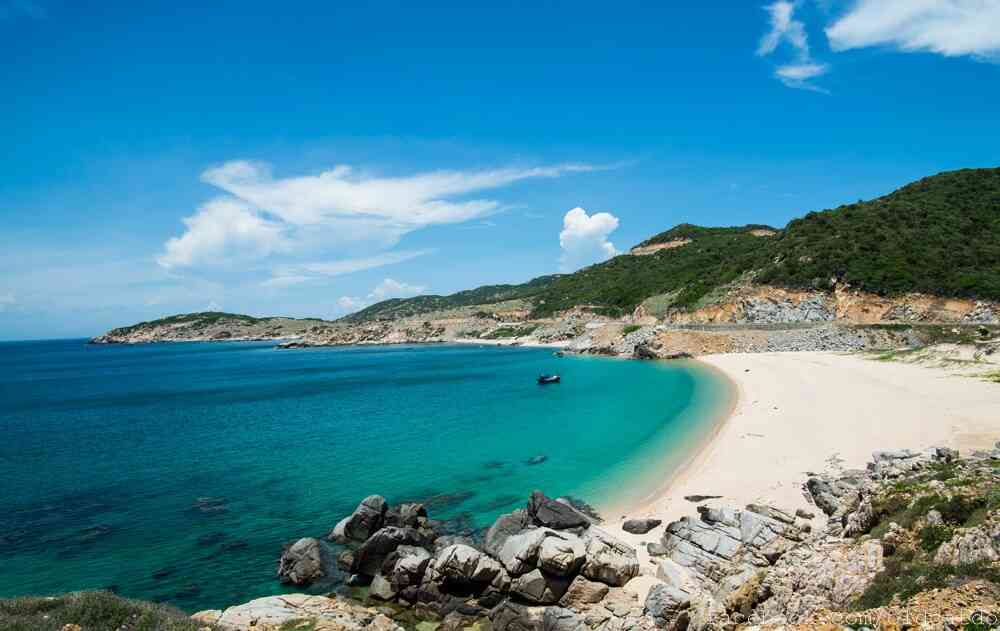 Ninh Chu Bay, with its 10km crescent shaped white sands, is considered one of Vietnam’s nine most beautiful beaches. It is safe to swim here during most times of the year and is nearly deserted during daytime. 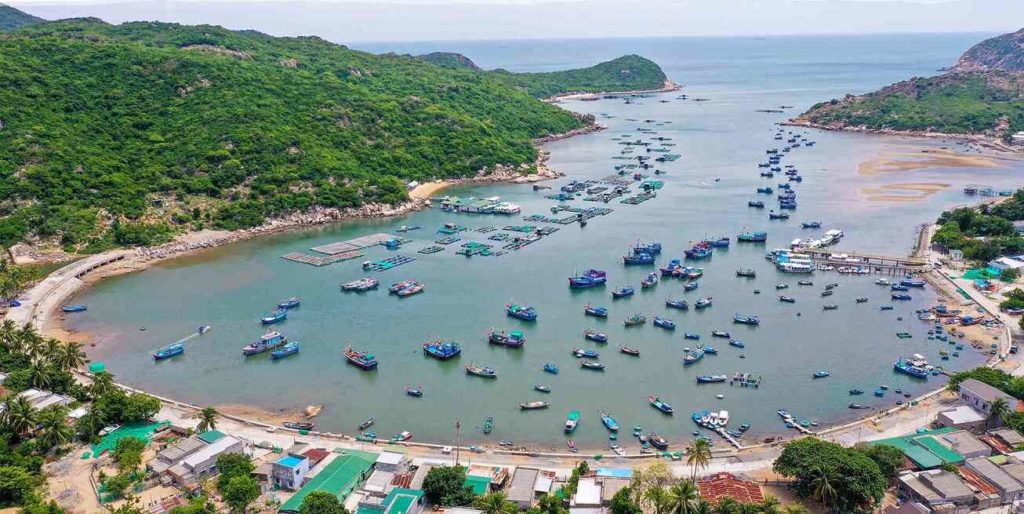 Surfing, diving, kayaking, sailing, jet skiing and volleyball are some of the sporting activities to engage in. There are numerous rental centers for sports equipment including water sports. Fishing tackles and barbecue accessories can also be rented.

There are also several cozy restaurants right on the beach offering the freshest seafood.

What to eat in Ninh Thuan Viet nam

Originally a common food of the Cham people in Ninh Thuan Province, banh can (mini pancakes) has become a regional specialty. 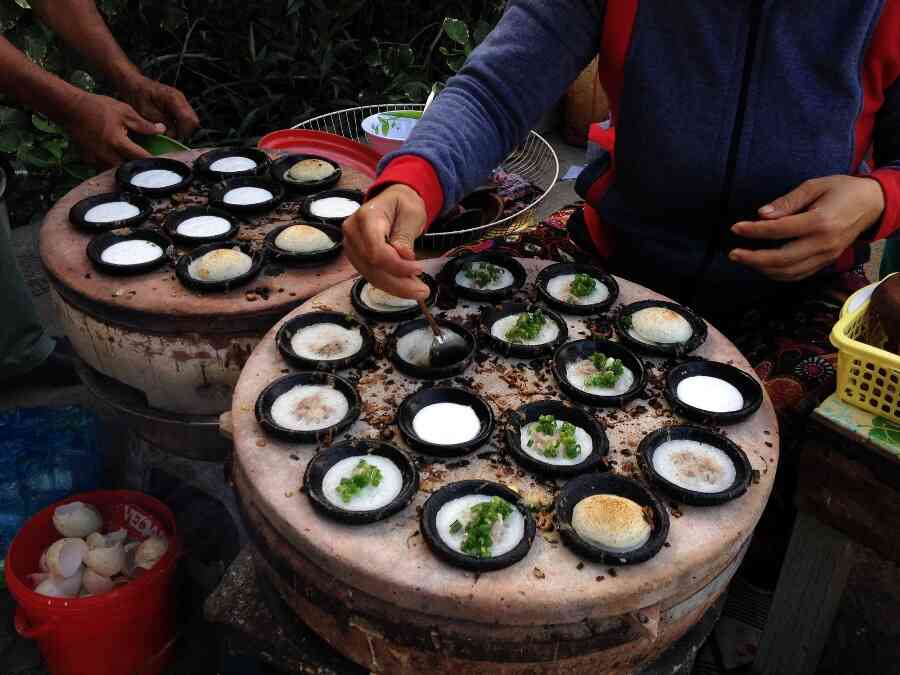 The cakes are cooked by pouring a mixture of rice powder and egg into round clay molds and baked over hot coals that vendors fire up very early in the morning to get the dish ready in time for breakfast.

These cakes are served with shrimp, minced pork or squid. The whole dish is smothered with spring onions before it’s served. 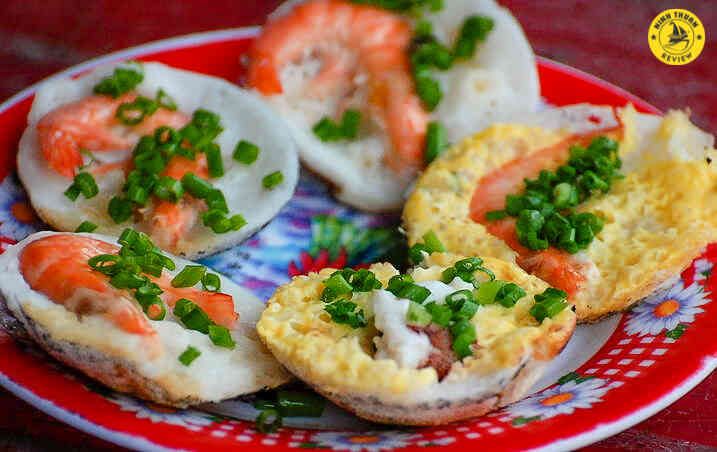 In Ninh Thuan, the dish is accompanied with a bowl of sauce made with braised fish, pickles and onions.

Banh can is available on many street corners in Phan Rang, the capital of Ninh Thuan. Some of the best versions are served on Doan Thi Diem Street, across from the Ninh Thuan Culture Center. 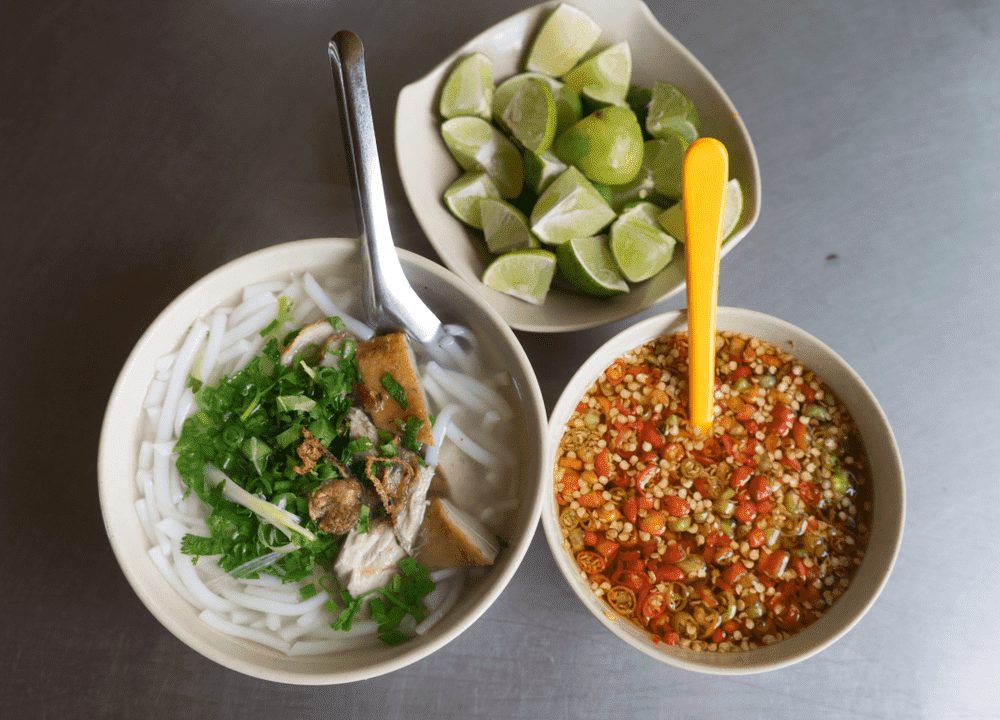 The fish, mainly silver fish, are carefully selected from seafood markets, and chefs would separate the flesh from the bones. The flesh is used to make cakes while the bones are stewed along with pork bones to make a flavorful broth.

A restaurant on Ngo Gia Tu Street is one of the most famous eateries for fish cake noodles. It is open from 8 a.m. to 10 p.m. every day.

In Phan Rang, a plate of chicken rice is a another popular dish. The chicken is locally bred, grilled or fried, while the rice is usually fried with eggs, onions and mint. 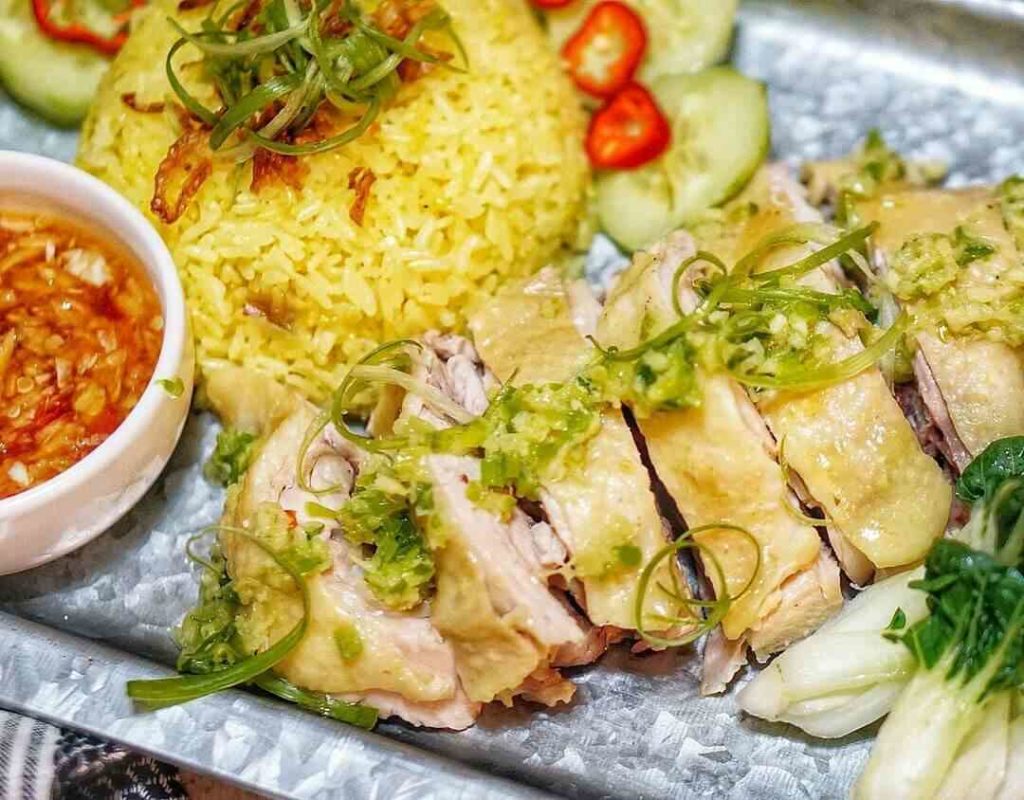 Jellyfish noodle soup is another dish to try in the province. Topped with round scad fillet and fish cakes in a fragrant fish broth, customers can add crab, shrimp or pork to the jelly fish.

Jellyfish reportedly has many health benefits, especially for those suffering from high blood pressure and intestinal ailments. 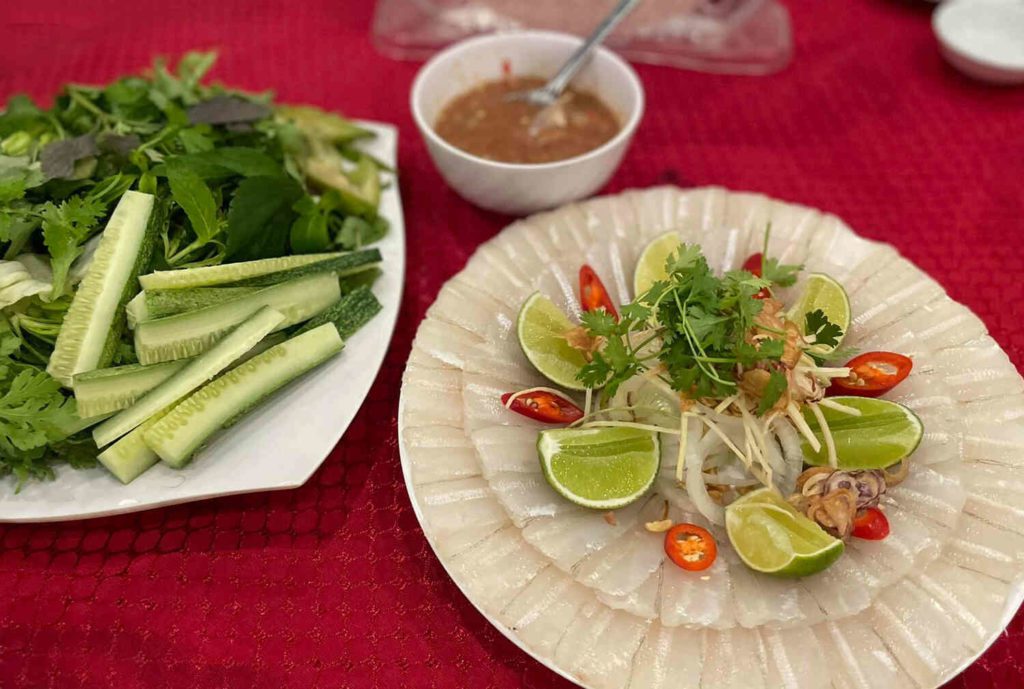 Where to stay in Ninh Thuan Vietnam

Given its reputation for harsh weather, Ninh Thuan is not highly favored by tourists and accommodation services here have not developed like Nha Trang or Quy Nhon on the central coast.

However, it hosts one the most famous hospitality addresses in Vietnam – the Amanoi Resort nestled in the Nui Chua National Park beside the Vinh Hy Bay. 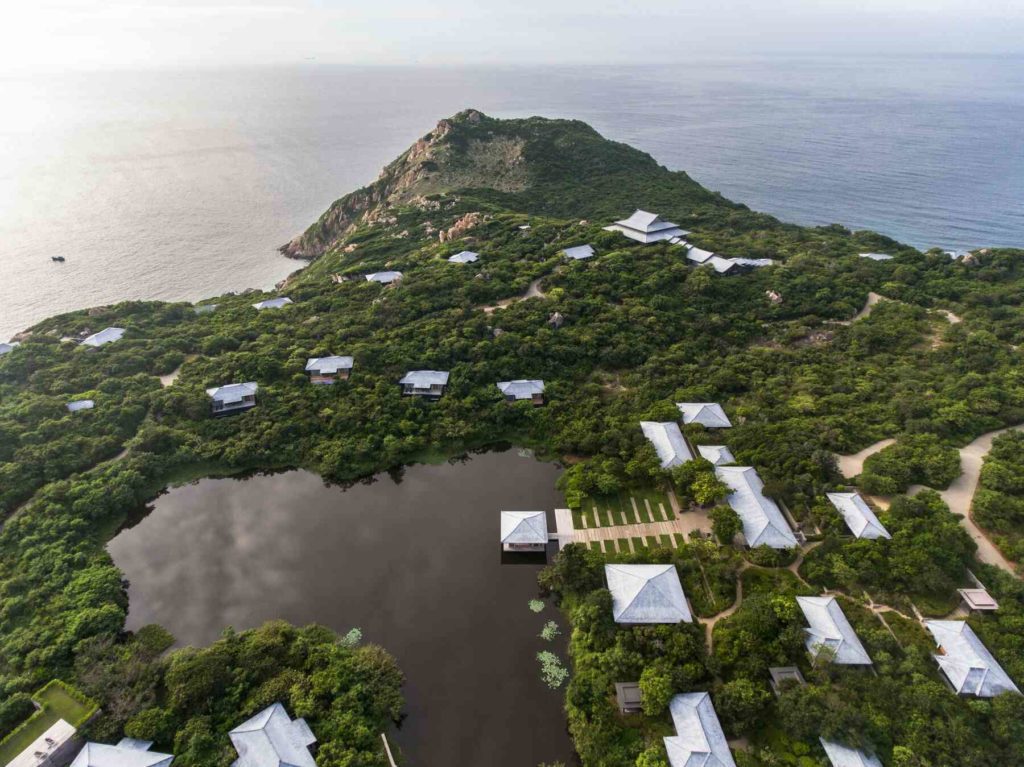 Then there are several 3-4 star hotels located along Ninh Chu Beach, including Hoan My, Saigon – Ninh Chu, Aniise and Long Thuan. Room rent ranges from VND1 to 2 million per night.

In downtown Phan Rang Town, there are two-star hotels or budget motels with room rents ranging from VND300,000 to about 500,000 per night.