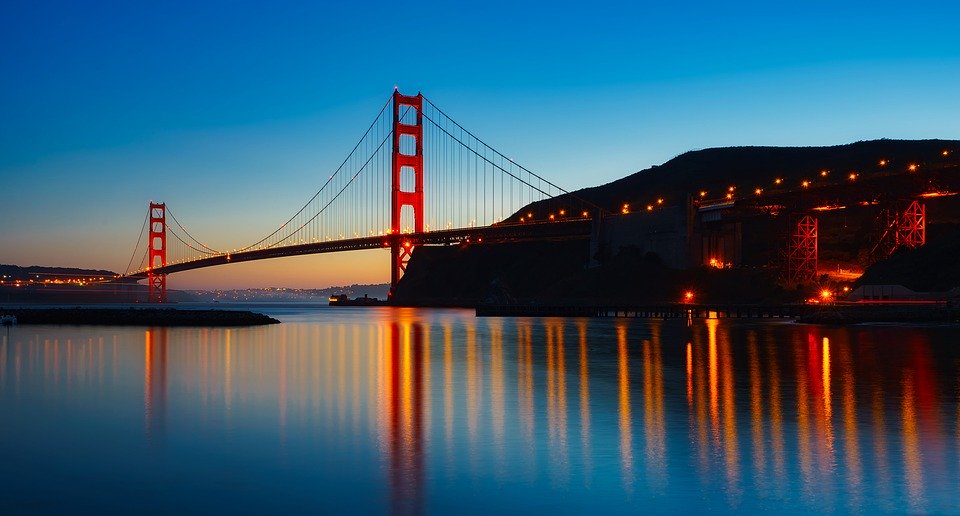 Golden Gate Bridge is a suspension bridge connecting the Golden Gate, the gateway to San Francisco Bay and the Pacific Ocean. Part of both US 101 and California State Route 1, connecting the northern tip of San Francisco and Marin County. The idea of ​​the bridge came from an engineering student named James Wilkins and was implemented by Joseph Strauss. Started and built in 1933 and completed in 1937, the Golden Gate Bridge was one of the greatest transportation constructions of the United States at that time. 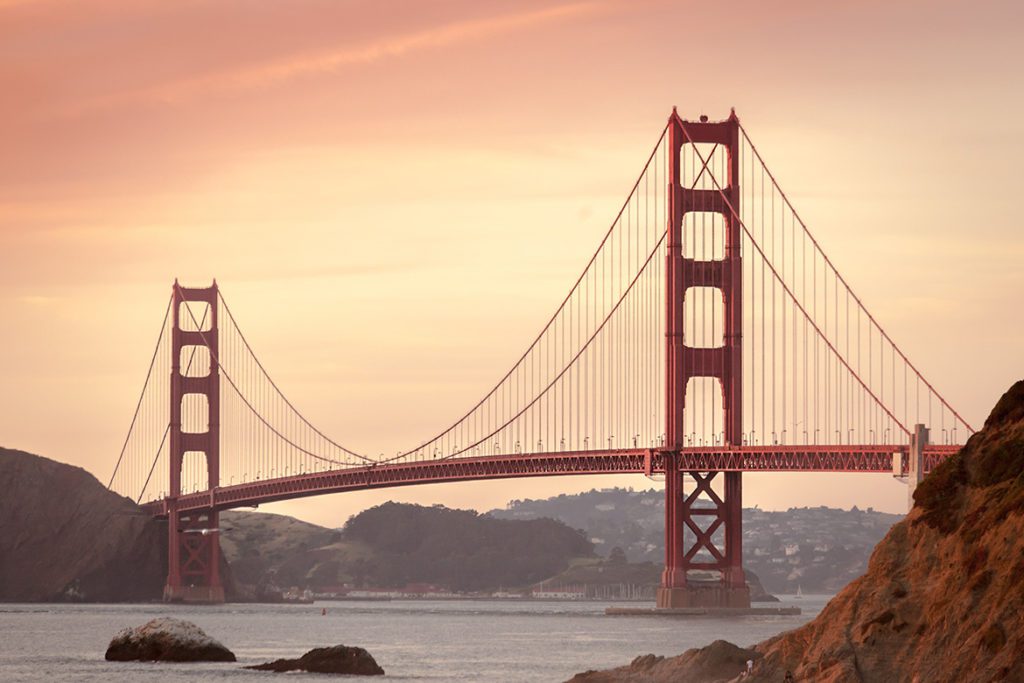 Golden Gate Bridge is located at an altitude of 67m above sea level with a total length of 2,737m. Despite being called the Golden Gate Bridge, the actual color of this bridge is officially red and orange. With this striking color, the bridge always stands out among the layers of fog and is separated from the blue color of the sky, highlighting the beauty of the beautiful San Francisco Bay. Golden Gate Bridge was started construction on January 5, 1933 with an estimated cost of over 35 million USD. And completed in April 1937 with 1.3 million lower than expected cost. To build the bridge to withstand earthquakes, they built a giant bottomless steel chamber and lowered it to the bottom of the sea. To prevent water entry, the steel chamber must have a pressure higher than the water pressure of 33m. This has led the pedicure nail salon workers to work in extremely dangerous conditions, with difficulty breathing, nose bleeds, fainting and even paralysis.

After more than 4 years of extremely arduous labor, the bridge was formed with a seductive appearance draped in a brilliant red-orange shirt. This is the symbol of the city of San Francisco and the pride of the United States.

As the most poetic bridge in the world, although it is mostly covered in mist, it is one of the most magnificent landscapes. Standing in front of the bridge, you will admire and marvel at its beauty. From the bridge, you will enjoy the majestic view when overlooking the bay, the city, the Pacific Ocean and Mairin Cape. You should bike or walk to admire this wonderful scenery. If you want to fully enjoy the best view of the Golden Gate Bridge, it comes from the scenic spot on the northern part of the bridge in Marin County. Regardless of the day, the mist hugs the bridge. It is thought that the bridge is floating in the air because the fog has surrounded the foot of the bridge with only ropes covering the sky.

In the summer afternoon, the Golden Gate Bridge shows a sunset picture with the sunlight shimmering through the extremely beautiful clouds. We seem to be lost in the fairytale world full of mysteries and distract us who do not want to leave. With the unique beauty that adorns the bridge, both majestic and majestic, colorful in the daylight to splendid splendor under the night lights. Golden Gate Bridge is a masterpiece of art in the immense ocean. This is an architectural work that attracts tourists to visit and explore.

1. The diameter of the main cable cars is 0.91 meters. At the time of its birth (in 1937), the Golden Gate Bridge was considered to be the longest suspension bridge in the world, and its position was toppled on November 21, 1964 by the Verrazano Narrows Bridge in New York.

2. The name Chrysopylae or Golden Gate was named by geodetic engineer John C. Fremont, because this bridge reminds him of the port of Chrysoceras – Golden Buffalo Horn – in the city of Istanbul, Turkey.

3. Golden Gate Bridge by architect Joseph Strauss – A passionate engineer, previously built 400 bridges across the United States. The process of designing and building is very arduous and dangerous but it is “The tragic song for passion and courage”

4. . 19 people who escaped death during the construction of the bridge became an honorary member of an (unofficial) organization called Half Way To Hell, for those who had “escape death”.

5 . President F. Roosevelt officially pressed an electric button for the opening ceremony – marking the birth of one of the greatest bridges in human history in 1937.

North Shore (on Marin County):
– Marin Headlands: photos from this point often appear in postcards, this location is very close to the bridge. You should come here early because the parking is limited, do not forget to bring a jacket or sweater because it is very windy. If you come here at sunset you will have impressive photos with the background are the lights in the city.
– Kirby Cove: this point is suitable for collages like swings. Walk to Kirby Cove about 20 minutes, the entrance is next to the car park for Battery Spencer.
– Vista Point: located at the end of the bridge when the vehicles on the bridge heading to Marin County, then the vehicles will turn to the directions. This angle captures a busy view of the bridge.

South Shore (San Francisco):
– Baker Beach: a beautiful beach often crowded in the summer, it also has a nude bathing area. You can capture the bridge with the boats sailing in the wind.
– Crissy Field: Large meadow can organize outdoor picnic. If you do not like to picnic, go to the sandy beach in front of you.
– Fort Point: this point is selected by many people to capture the bridge. There is a small path leading to the viewpoint for visitors to view the bridge from above.

On the bridge:
– You can see the bridge from any position on the bridge or from both sides of the bridge. Another interesting thing is crossing the bridge by car or bus on a foggy day. You will only see part of the bridge closest to you and the rest hidden under the mysterious fog shrouded.

How to get to the Golden Gate Bridge 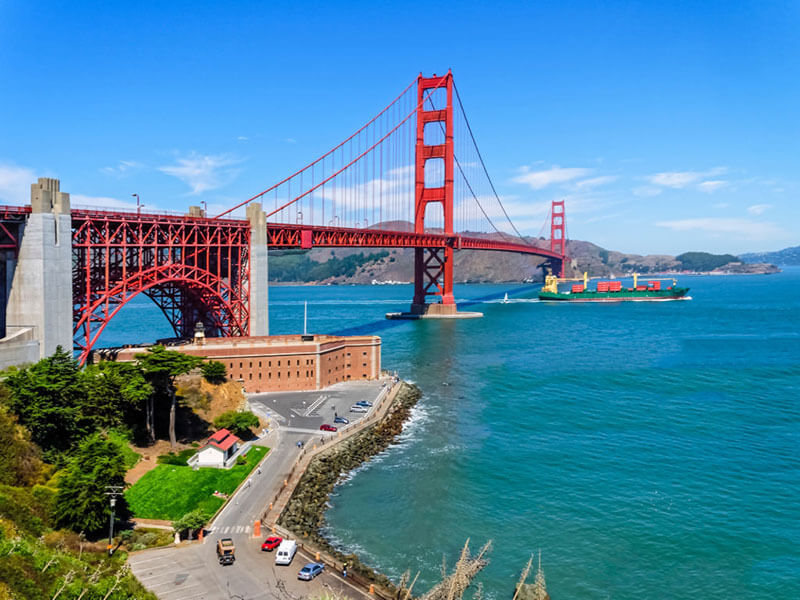 – Bicycles: many tourists choose to rent bicycles to the Golden Gate Bridge. Bicycle rental service in the Fisherman’s Wharf area. Rents are quite expensive at $ 8 / hour or $ 32 / day, with a map of directions to the bridge.

What to do on the Golden Gate Bridge 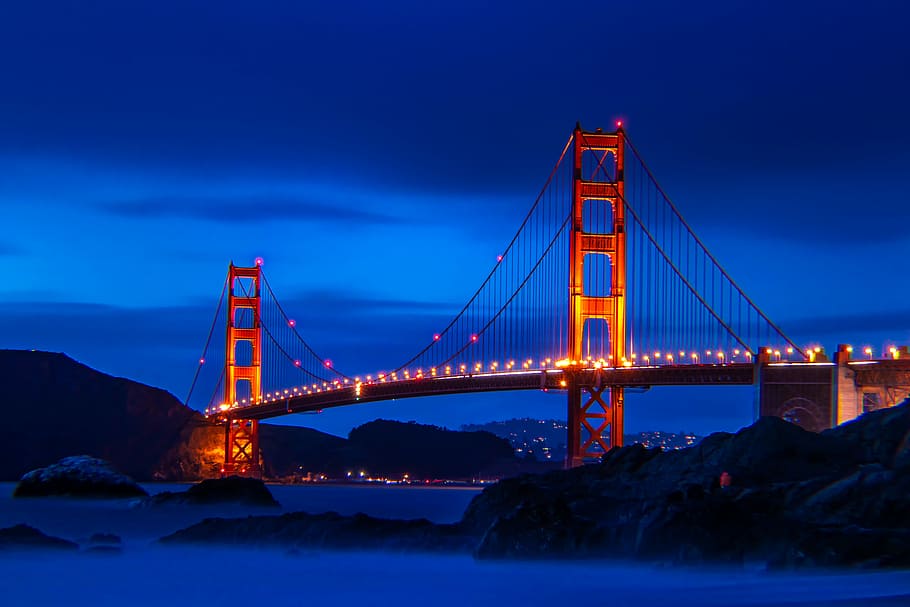 – Walk across the bridge: this must be a self-sufficient trip, you will see the Pacific Ocean on one side and the San Francisco Bay on the other. The days without fog can see the horizon and Sausalito, Angel Island and Alcatraz. Remember to bring a jacket because it is quite cold, wear sports shoes because the bridge is 2.7 km long in each direction.

– Find suicidal phone numbers: At the two ends of the Golden Gate Bridge, you will see emergency numbers telling people that they have options other than ending their lives. Because the bridge is also the “favorite” point of those who want to commit suicide by jumping into the sea. To limit this situation, people have installed a safety net outside the bridge. But this is a controversial topic because some insiders do not want these nets to lose the beauty of the bridge.

– Buy souvenirs: there is a gift shop located at the southern end of the Golden Gate Bridge, in the Roundhouse building.

– Visit Lone Sailor Memorial: this is a Navy statue made of bronze, at the southern end of the Golden Gate Bridge. This statue has many versions located in many places in the US.

What tours to visit the Golden Gate Bridge 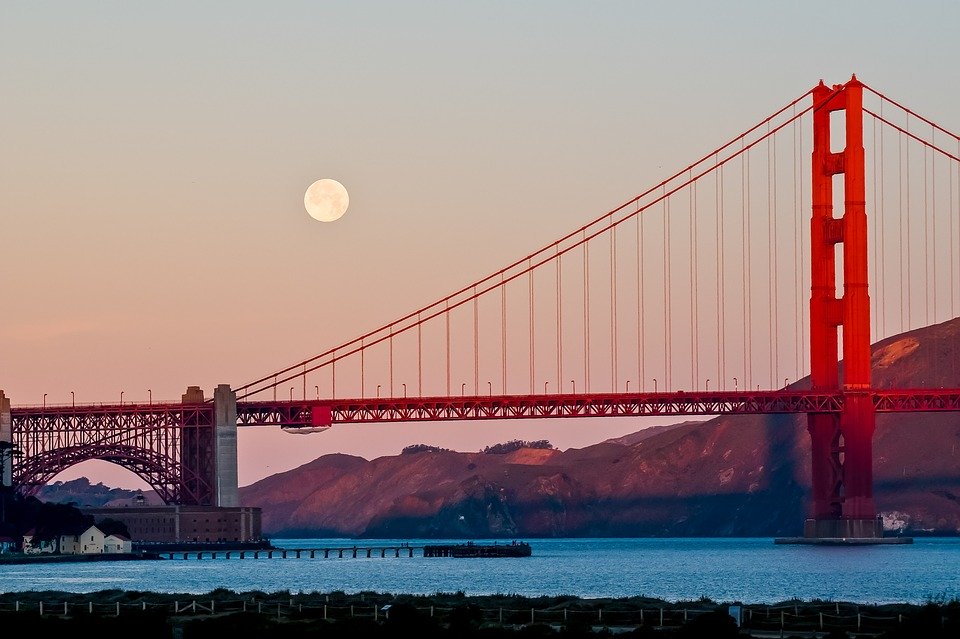 To visit the Golden Gate Bridge, choose the US West Coast tours with the route through San Francisco. In addition to the Golden Gate Bridge, the tour also takes visitors to experience Lombard Flower Road – the most strange sloping street in the world; Fisherman’s Wharf (Pier of the Fisherman’s Wharf), Pier 39 – where many sea lions attract children and panoramic view of San Francisco Bay …

To be able to experience the interesting things about the famous Golden Gate Bridge, you should spend a session on your self-sufficient San Francisco trip. Getting sparkling photos by this bridge will be a reward for your hard work.