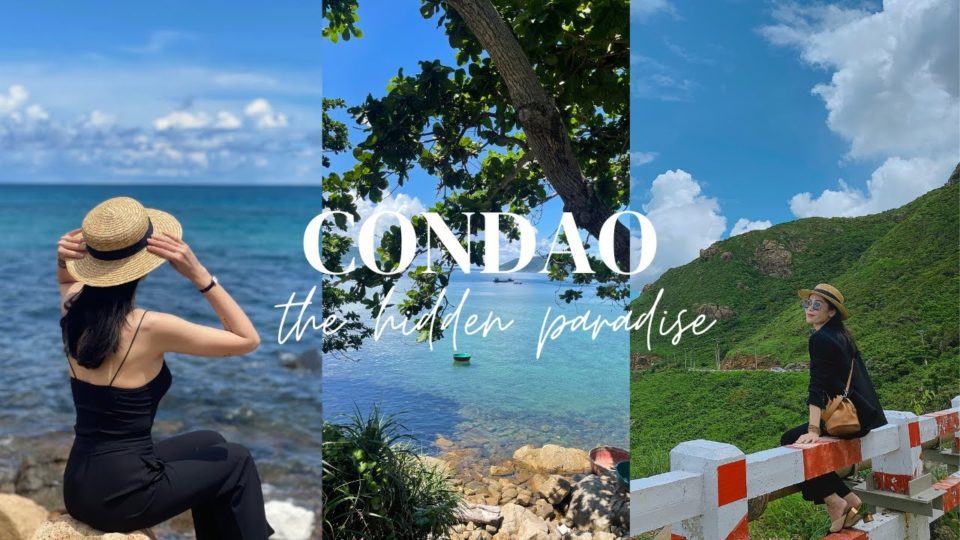 If you are planning for you trip to Con Dao Vietnam in this summer, you’re in the right place. This post will give you Con Dao travel guide – One of the most beautiful island in Vietnam. A veritable natural paradise, Con Dao Island has also been a man-made hell. It has since become a historic, sacred site with a surprising subset of pilgrims – Vietnamese businessmen.

The best time to visit Con Dao is from March to September when the sea is quiet, making it safe for tourists to enjoy outdoor activities.

The northeast monsoon winds visit Con Dao from October to April. At this time, it is better to travel by air since fishing vessels and speedboats cancel their services often.

That said, even during the rainy season (May-October), the downpours are gentle, lasting a mere hour or so in the afternoon. In the morning, the weather remains sunny with clear skies.

HOW TO GET CON DAO ISLAND

A cheaper option is the ferry. From HCMC, a two-hour bus ride to Vung Tau costs VND90,000. It is best to take the bus early in the morning and catch the first ferry of the day at 8 a.m.

WHAT TO EXPLORE IN CON DAO

Google ‘most popular place’ to visit in Con Dao and the first name that comes up is the Hang Duong Cemetery where thousands of Vietnamese revolutionary soldiers and fellow patriots were incarcerated, tortured and killed from 1862 until the end of the Vietnam War in 1975.

In the 20-hectare cemetery stands the grave of Vo Thi Sau, who was executed by the French at the age of 19. She has become a shining symbol of Vietnamese courage and heroism.

Between 10 p.m. and midnight every day a sacred vigil takes place in front of Sau’s grave with offerings of candles, incense, flowers, fruits, combs and mirrors.

Vietnamese people believe midnight is the holiest time to visit the graves of loved ones, especially those who died young and unmarried. Prayers to such souls are believed to be highly efficacious, so hordes of devotees flock to Sau’s grave at midnight. 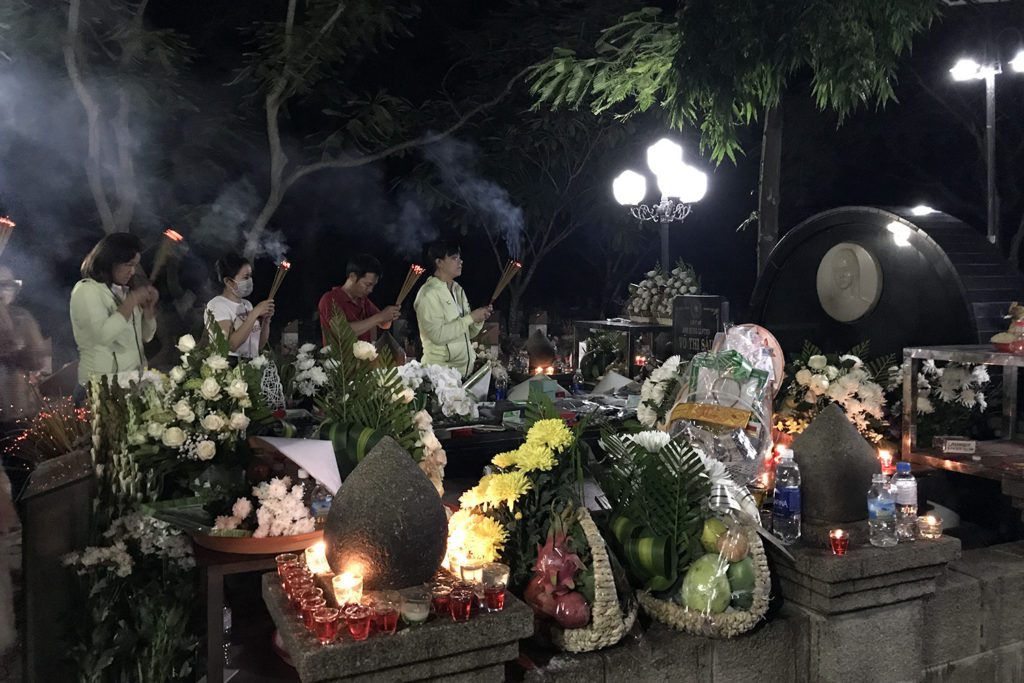 Ngo Hoang, a tour guide who specializes in organizing two-day “spiritual” tours to Con Dao, said many visitors have no time for traveling and come here solely for the midnight pilgrimage.

“Most of my customers are business people and merchants. They fly to Con Dao on Saturday and spend a night here to visit Sau’s grave and return home on Sunday.”

Some sellers will even guide visitors on how to pray in front of Sau’s grave and the taboos to be avoided.

Pilgrims have to wear long pants and cover their shoulders.

For Con Dao islanders, the second sacred destination is the An Son Temple built in the 18th century to worship Lady Phi Yen, who protects fishermen from dangers at sea.

She is respected for her purity and faithfulness, which is symbolized by lotus ponds on the way to her temple. 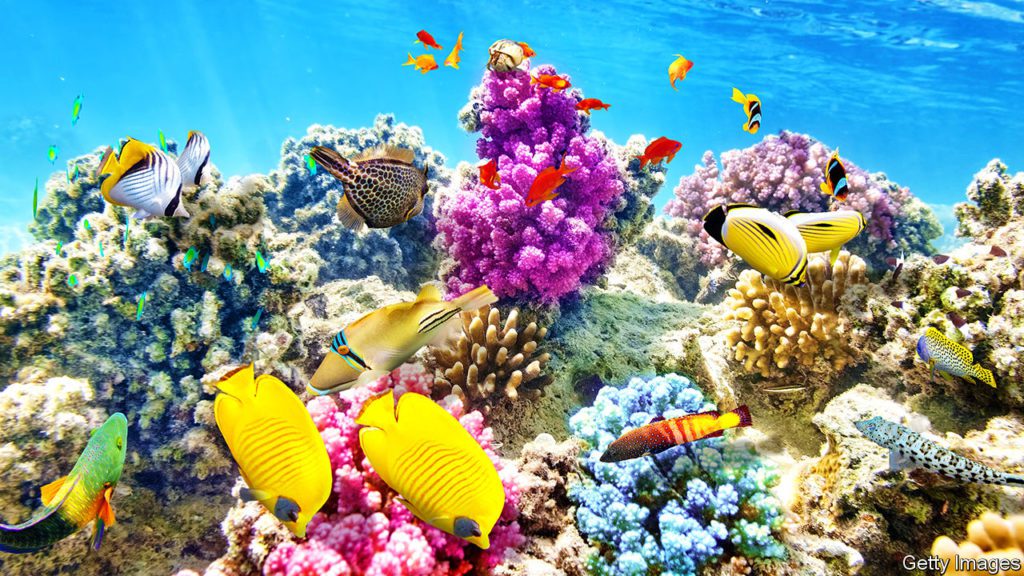 The next spiritual destination is Van Son, the only pagoda on Con Dao, perched on a small hill around 1.6 kilometers from downtown.

Built by the U.S. in 1964 to serve as a place of worship for prison officers stationed in Con Dao, the pagoda rose from the hard work of Vietnamese prisoners forced to carry construction materials to the top of the hill.

Pilgrims have to climb 200 steps to reach the temple, prepared for the challenge of monkeys trying to snatch things from them. A xe om (motorbike driver) can be hired for VND20,000 a round trip to the top of the hill.

“It’s a short but steep climb to the top where the temple is. Not too difficult for most people. A nice view of the town and beach from up there,” Thexder, a Singaporean tourist, has written on Tripadvisor.

In recent years, another sacred destination that has emerged in Con Dao, attracting people coming to pray for prosperity, career promotions and the like is Van’s Temple in Hon Cau, one of 16 islands in the archipelago.

According to locals, the temple was built by a group of local fishermen to pay respects to a young girl found dead at sea. The girl, Van, is believed to help fishing boats avoid danger at sea.

The only way to reach the temple that stands alone on the sandy beach is by speedboat from Pier 914.

The most notorious place on Con Dao, dubbed “Hell on Earth” at one time, is the prison complex built by the French to jail and torture Vietnamese freedom fighters during the colonial times and then used by U.S. forces for similar purposes during the Vietnam War. 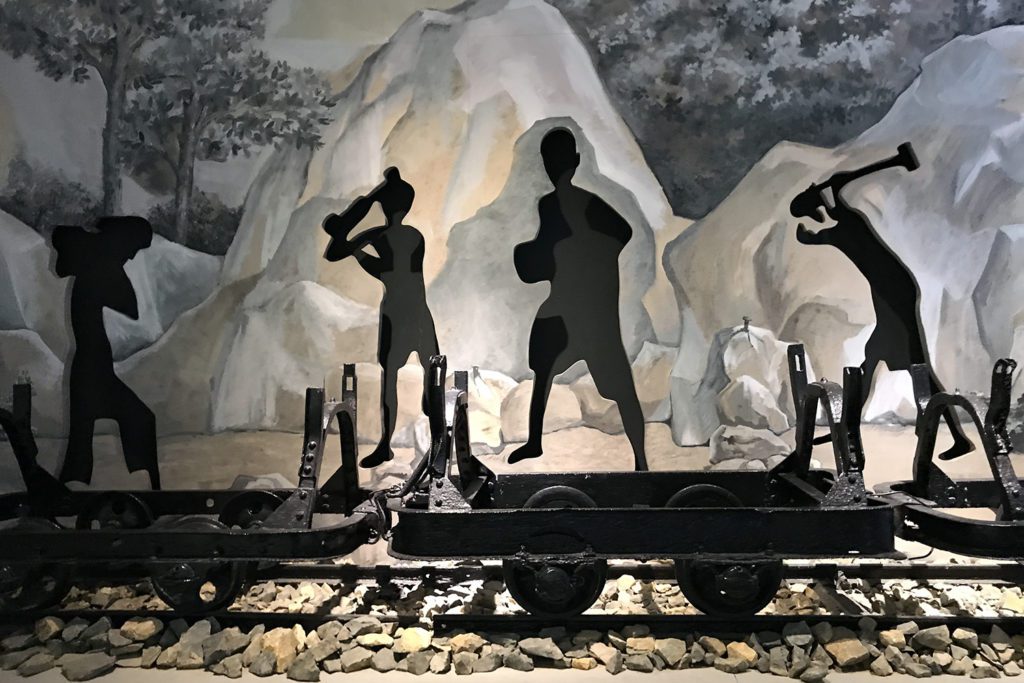 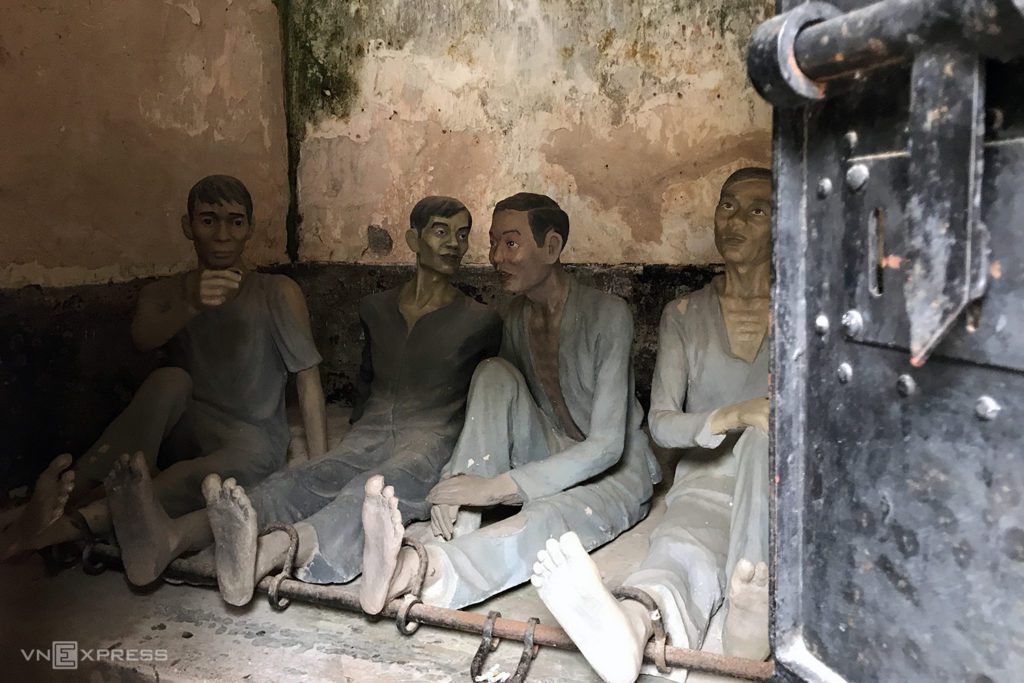 The prison was closed after the end of the Vietnam War and it became a historical site with Vietnamese citizens particularly interested in the “Tiger Cage” area, where prisoners suffered the harshest solitary confinement.

The area consists of 120 solitary, dirty confinement rooms in which prisoners were shackled and made to lie on a damp cement floor. They also suffered horrific tortures.

Admission fees to this must visit site costs VND40,000 per person.

Another place of interest is the Chua Dao Palace, also known as the Governor’s palace, home to 53 “lords” who ruled the prison system for 113 years with cruel policies for Vietnamese prisoners. It is seen as a “living museum” of war crimes. 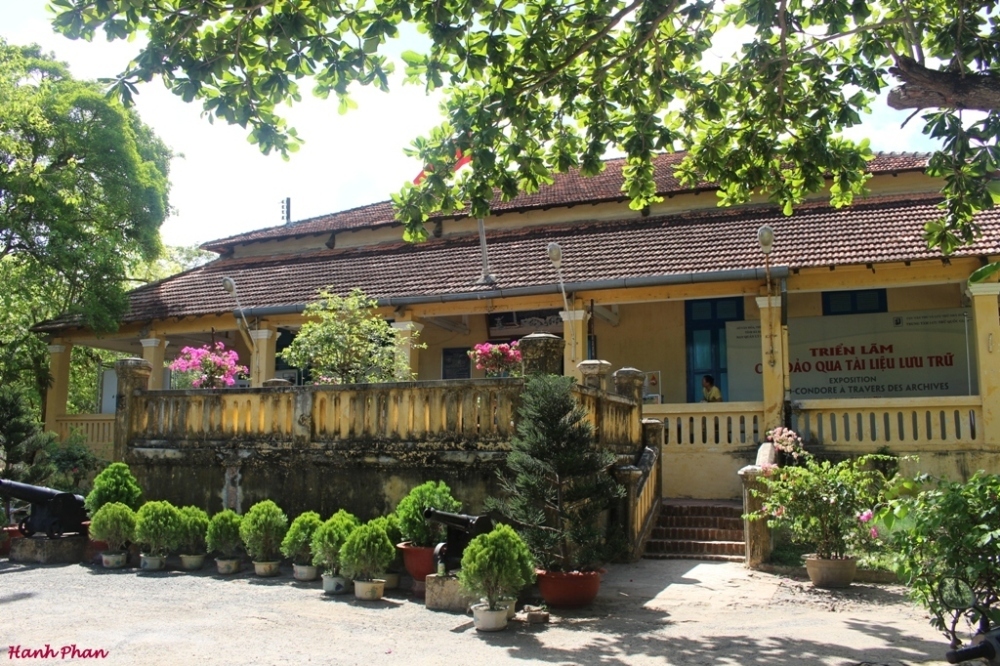 Located opposite to the historic 914 Pier near the French Tiger Cage area, the Con Dao Museum has more than 2,000 exhibits, including many rare documents, dioramas and photographs that comprehensively record the island’s history.

Most visitors to Con Dao stay on Con Son, the largest and only inhabited island in the archipelago. From Con Son, they explore the smaller islands, of which Bay Canh is the best known. This is also one of the best things to do in Con Dao Vietnam 2022.

Located to the east of the island chain, Bay Canh is home to primary forests that boast 882 flora and 150 fauna species.

From Con Son, it takes 20 minutes by speedboat to reach Bay Canh. One special activity for visitors here is to release baby turtles to the ocean and/or watch mother turtles lay their eggs on the beach.

From April to the end of October every year, over 400 green turtles and hawksbill sea turtles, (Eretmochelys imbricate) lay their eggs on Bay Canh Islet.

After releasing the turtles back to sea, visitors can trek through Con Dao’s mangrove forest, formed and developed on the surface of dead coral reefs, sand and soft clay – a rare phenomenon.

Con Dao is also famous for its long, sandy beaches such as Nhat and An Hai where tourists can hire canoe service for diving and watching coral reef.

Dam Trau next to Con Dao Airport where tourists can watch planes take off and land was listed among the world’s 25 best beaches by U.S. travel site Travel+Leisure.

WHERE TO STAY IN CON DAO

Covering 12 hectares along Dat Doc Beach, Six Senses Con Dao is the only five-star beach resort. It gained global fame after celebrity couple Brad Pitt and Angelina Jolie stayed at the resort along with their children in 2011. 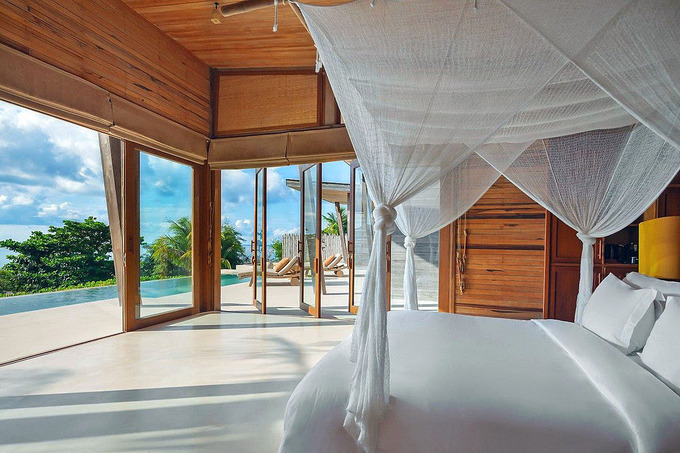 WHAT TO EAT IN CON DAO

Unlike other versions in central Vietnam, small bowls of hot water fern cakes are topped with just fried shrimp and scallion oil, served with a Vietnamese dipping sauce.

The dish is available at Co Ba’s restaurant at 64 Nguyen Hue Street.

Oyster porridge is a specialty in Con Dao. After they are caught in the sea, the oysters are cleaned and marinated with spices, fried and added to a pot of hot porridge. 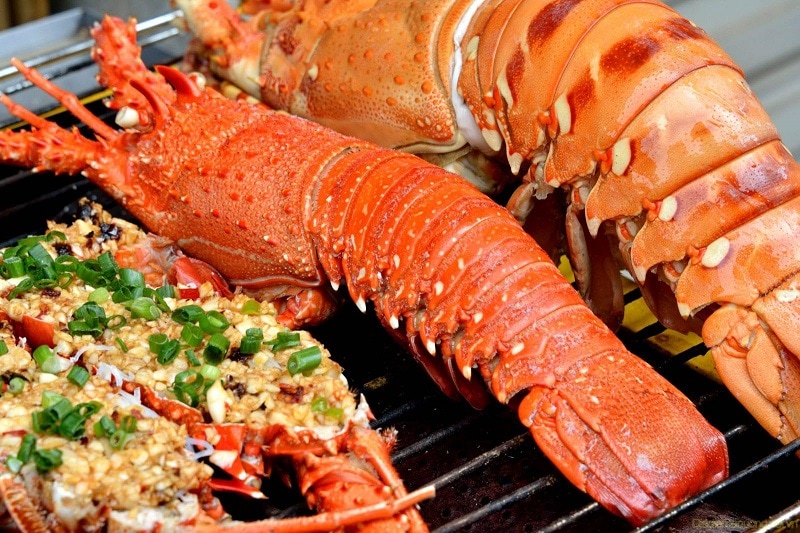 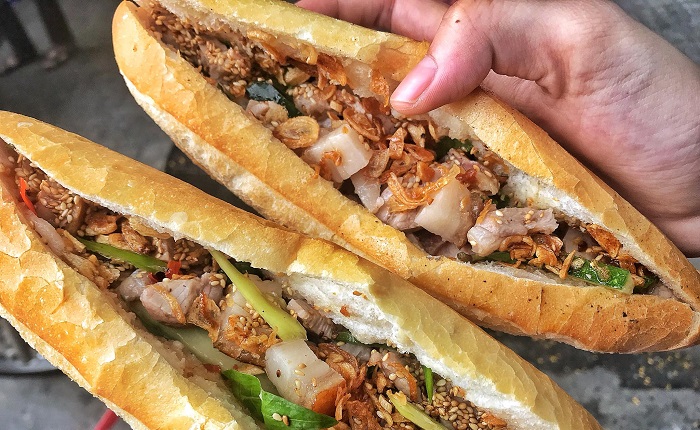 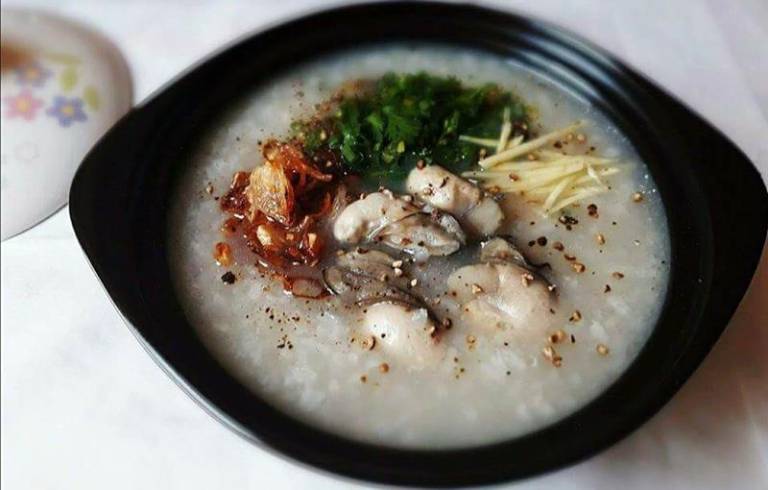 The Family restaurant on Tran Phu Street serves a bowl of oyster porridge for VND35,000-50,000.

Banh xeo (Vietnamese pancake) is also a popular breakfast in Con Dao. This turmeric-flavored crepe is made of rice flour and topped with shrimp, pork and onions. It is served with lettuce and other herbs along with a cup of peanut sauce or fish sauce as the dip.

Kieu Tam’s restaurant on Nguyen An Ninh is famous for serving this treat at VND15,000 per serving.

Banh mi served with roast pork can be easily found. The best roasted pork sandwich is said to be served by a restaurant near the Duc Thanh hotel.

These delicacies can be bought at the Con Dao Market. Tropical-almond tree seeds roasted and seasoned with sugar and salt make for a crunchy, fragrant snack.

Discover the beauty of Hue city, Vietnam – Gentleness and quiet