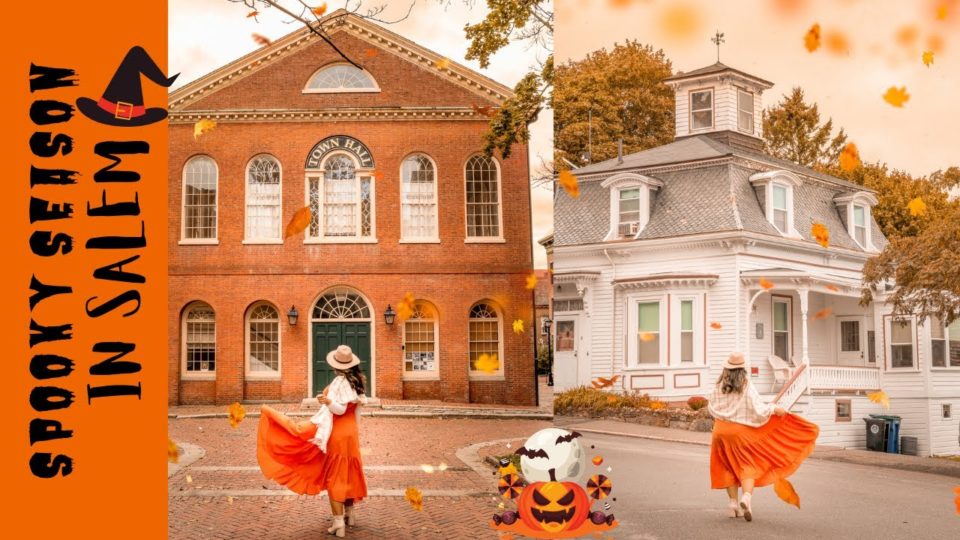 Headed to Salem and wondering about how to visit Hocus Pocus filming locations? This guide will tell you how!

If you ever watched the 1993 film Hocus Pocus with Bette Midler, Sarah Jessica Parker, Kathy Najimy, and the young Thora Birch then you might have wanted to see the iconic movie locations for yourself.

As the movie was filmed on location in the historic town, it is perfectly possible to visit Hocus Pocus sites in Salem.

You can visit these filming spots on your own or with a special Salem MA Hocus Pocus tour. Read on for the complete guide for filming locations and check the link to see the exact location on Google Maps.

*Disclosure: This post contains a few affiliate links, which means I may receive a small commission, at no cost to you, if you make a purchase through my link.*

How to Visit Hocus Pocus Sites in Salem

This guide means that you can easily explore all the Hocus Pocus film locations independently. A number of the sites are in downtown Salem and are within walking distance.

Others are somewhat further afield so you may benefit from hiring a bicycle or hailing a lift with the Salem Skipper – a local rideshare service.

The Salem “Hocus Pocus” Movie Locations Walking Tour takes you to all the Hocus Pocus Salem locations listed below. But with a professional guide at the helm, you’ll also gain tons of insight about Salem’s 1692 Witch trials in addition to an understanding of the area’s maritime history and wider history.

This guided tour experience only runs at weekends in September and October. If you want a place on the list you will need to book it far in advance as it always sells out. 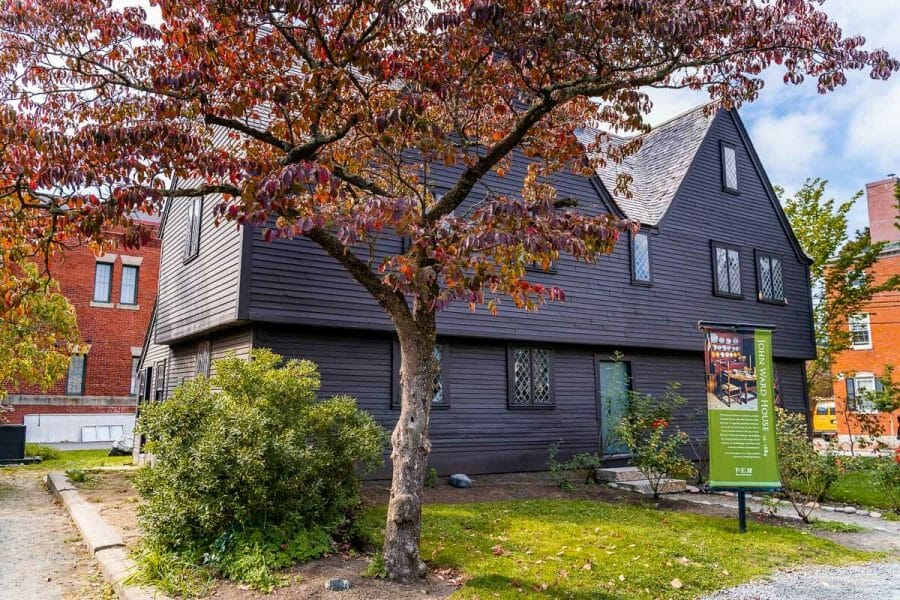 Hocus Pocus opens with a flashback to 1693 with young Thackery Binx noticing that his little sister, Emily, is absent from her bed. Binx heads off to search for her and, well, no spoilers if you’ve not seen the movie yet or you’re due a rewatch.

This scene was filmed in the Salem Pioneer Village which is a part of the Forest River Park, just south of downtown Salem.

The Salem Pioneer Village is in fact a museum that was developed in the 1930s and recreates life in rural 17th century New England. Exhibits include dugouts, wigwams, and thatched-roof cottages.

The seasonal attraction is slated to reopen imminently in spring/summer 2022 so you’ll need to stay tuned for updates from the Salem Pioneer Village office.

You can book tickets in advance online (highly recommended if you visit Salem during fall) or turn up on the day out of the peak season.

If you do book the Salem MA Hocus Pocus Tour then it includes admission to Salem Pioneer Village. The tour will culminate at the entrance and then you are free to roam.

Unfortunately, it isn’t possible to see the house used for the Sanderson house. This was purpose-built and dismantled after filming wrapped.

But if you want to see other witchy attractions then you can check out my guide to the spooky things to do in Salem MA which includes the likes of the Witch House and various museums. 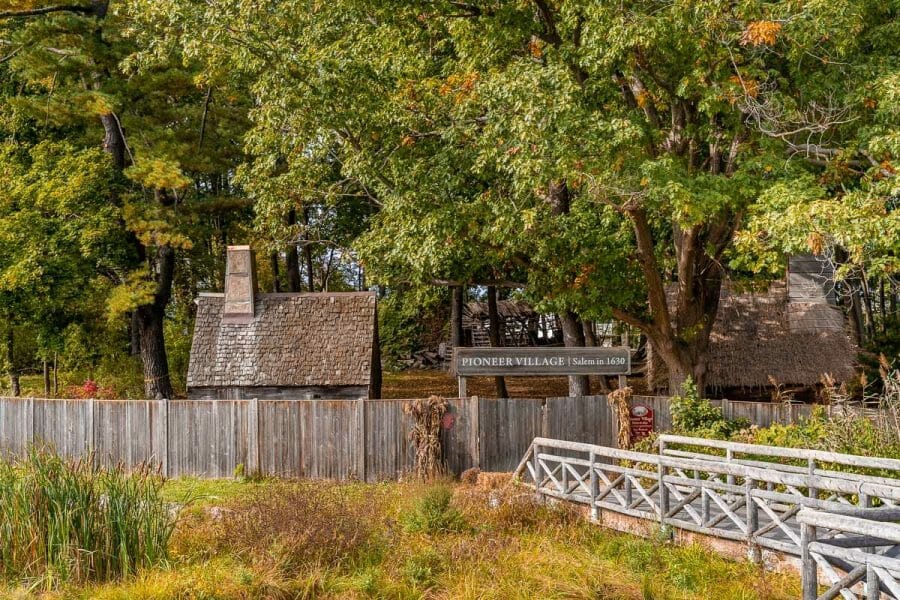 Without rewatching the film you’ll no doubt be able to conjure up an image of Dani and Max Dennison’s beautiful new home in Salem.

The pretty white house occupies three floors and is topped with a little tower. This room was claimed by Max in the film and provided the setting for Dani’s ambush of her big brother after hiding in the closet in her witch’s costume.

Although you can visit the house and marvel at how picturesque it is, bear in mind that the house is a private residence. The owners are no doubt used to tourists snapping photos of the exterior of one of the Hocus Pocus film locations but exercise respect while you’re at it.

This house is a short drive out of downtown Salem so unless of course you have an enchanted broomstick you’ll need a pair of wheels to get there. If you’re without a car then you can summon the Salem Skipper via the app.

If you decide to visit the Salem Pioneer Village then these two spots are very close to one another and it makes sense to visit them in unison. 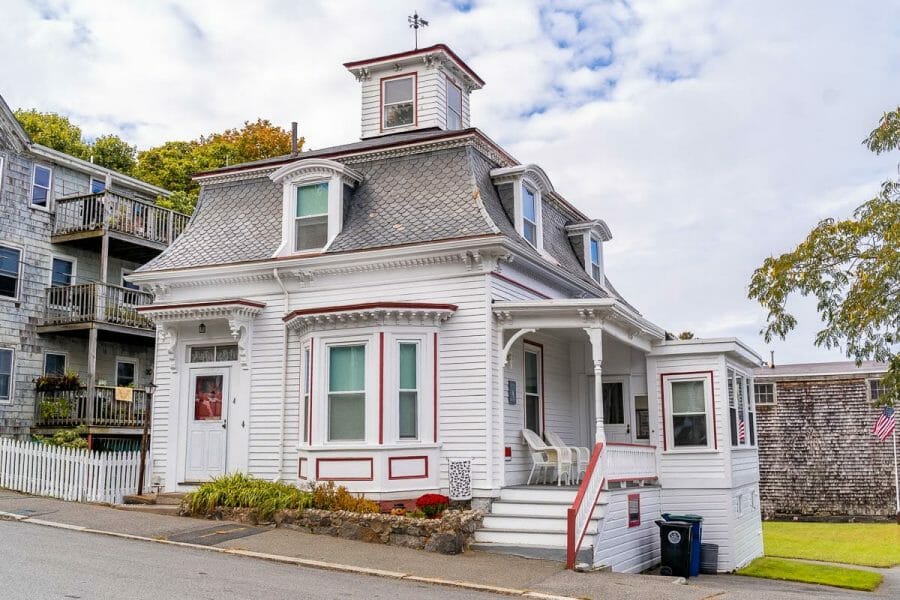 Dani and Max wander into Allison’s family home while out trick or treating and Max is surprised to bump into his new crush. Ropes Mansion, a Georgian-era manor home, provided the opulent setting for the scene.

The home and its lush gardens were designed by the Salem botanist and horticulturist John Robinson in 1912 as per a Colonial Revival style. It’s now owned by the Peabody Essex Museum (PEM) in Salem.

You can visit the house and have a wander around the gardens during the open season (usually, this is May through late October). It’s free to visit the gardens although the interiors are off-limits to the public.

Situated centrally in the downtown area, this is one of the more accessible Hocus Pocus sites in Salem. 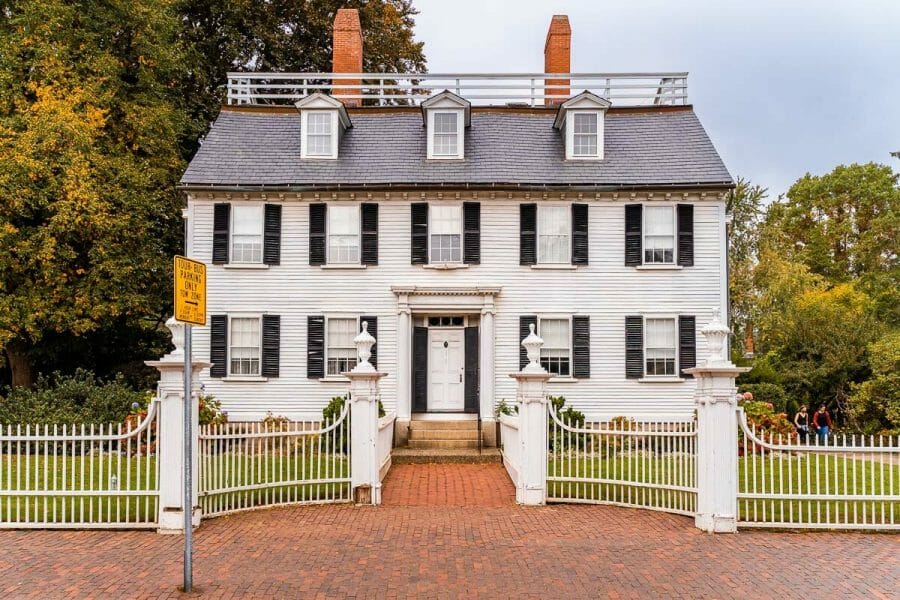 The Old Town Hall is where the freshly resurrected Winnie Sanderson (Bette Midler) put a spell on the entire adult population of Salem!

This building is located right in the beating heart of town, next to all the witchy museums and landmarks. It’s one of the easiest Hocus Pocus filming locations to tick off your list.

Various events take place throughout the year at the Old Town Hall including art exhibitions and performing arts.

If you visit the area during fall and are looking for spooky things to do in Salem MA in October then this place is likely to host a couple of the Salem Haunted Happenings events.

Costume balls feature on the annual agenda so you might even end up having a long night of dancing just like Dani and Max’s parents in the film. 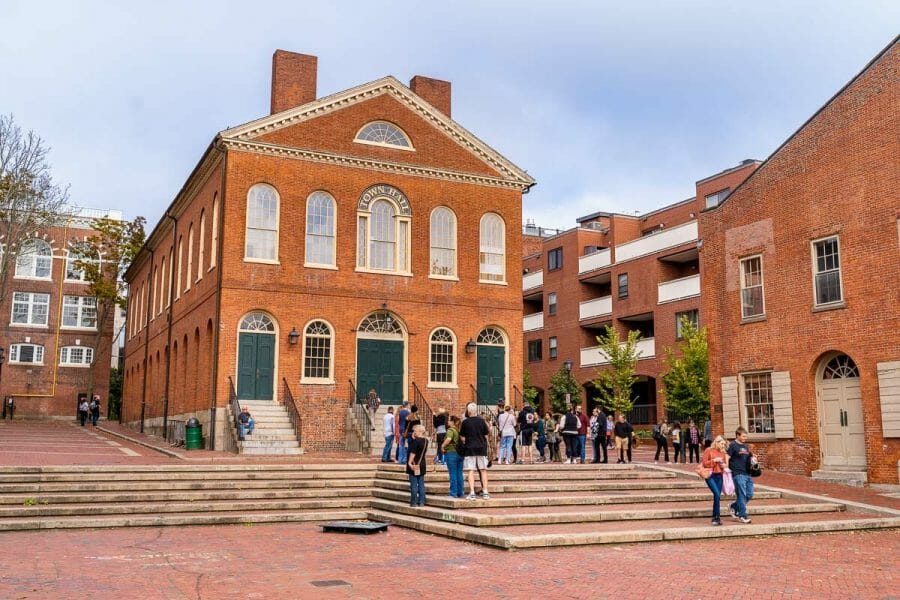 Salem Common is another of the centrally located Hocus Pocus sites in Salem. It’s right in front of the Salem Witch Museum and provides the perfect place to mull over your learnings about the history of the town.

This was the setting of Max’s attempts to flirt with Allison. As they walked home from school, Allison was taken aback by Max’s steadfastness that the tale of the Sanderson Sisters was all “a bunch of Hocus Pocus.”

The scene culminates with Allison returning a scrap of paper with Max’s phone number scribbled on the back.

It’s a short scene but the common is worthy of a wander especially if you’re visiting Salem in the fall season. The trees turn all shades of gold and red and it’s the perfect place to roam with your camera and an autumnal coffee.

If you book the Salem MA Hocus Pocus tour then this is where the magic will begin. 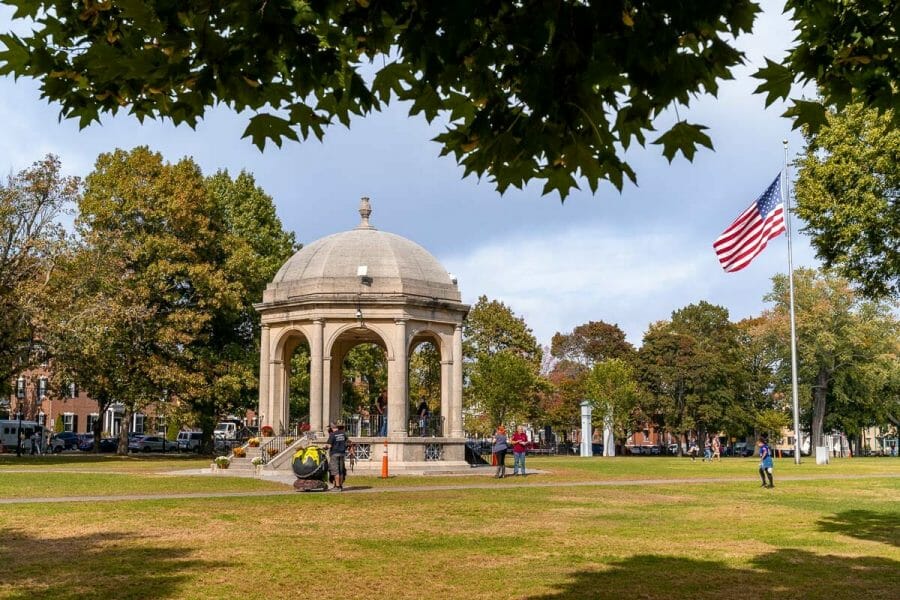 Scenes in the fictional Jacob Bailey High School were filmed in the Phillips Elementary School off South Washington Square.

The school is now closed although the building remains exactly as it appeared in the film. It’s instantly recognizable to fans of the film due to its red brick exterior and the huge chimney which played an important role in the film.

Early scenes include the first meeting between Max and Allison where they clash over their beliefs in the supernatural world.

Later – once Max can no longer turn his cheek – they and Dani attempt to burn the Sanderson Sisters alive inside the school’s furnace.

Actually, the school backs onto the common so it’s worth visiting these Hocus Pocus Salem locations at the same time. 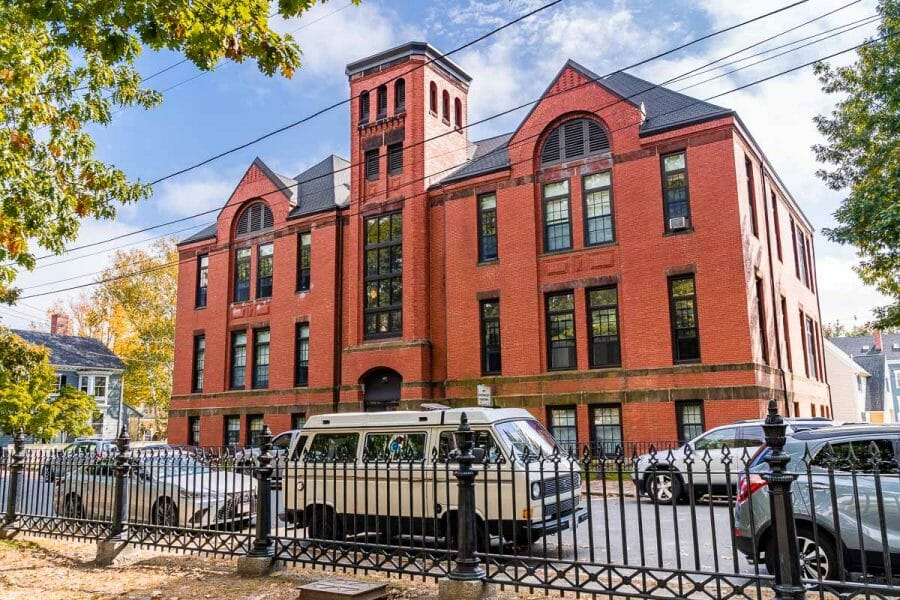 There is a famous cemetery in Salem downtown’s area however it isn’t the one that was used to film the scene in Hocus Pocus.

The cemetery where Max has his first run-in with the school bullies Jay and ICE was filmed in Old Burial Hill Cemetery and is located 5 miles (8 km) west of Salem in Marblehead.

This cemetery dates back to 1638 and provides a peaceful place to wander among the burial sites and greenery. An unknown cemetery was used for the scenes at the end of the film with the zombie, William “Billy” Butcherson.

That concludes my guide to all the Hocus Pocus filming locations. I hope that this guide will help you plan your itinerary in Salem and ensure that you see all the places that you can.

If you have any questions about these Hocus Pocus sites in Salem, feel free to contact me via email, social media, or by dropping a comment below.

Have you already visited these Hocus Pocus filming locations? Leave a comment below and let us know what you thought!

Essential Guide to Hiking in the Dolomites in October, Italy