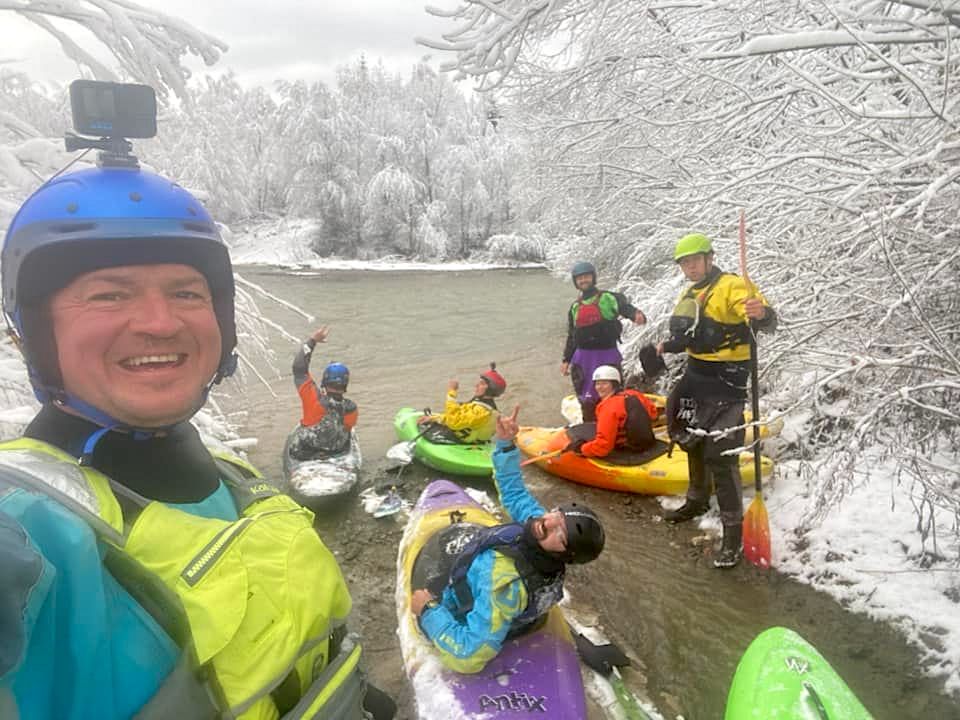 We often struggle to grasp the human impact of something like Russia’s invasion of Ukraine until the suffering we see on television and social media is distilled into something we can understand. For me, that moment came last week, when an image of a kayak in the sky blue and sunflower yellow of the Ukrainian flag stopped my scroll.

The boat was part of a fundraiser by Pyranha kayaks, a small company founded and run by whitewater lifers. The picture led to a blog post that started this way:

“We have ceased all shipments to Russia as of the week before last and have heard from both of our Ukrainian dealers that they are preparing to defend their homeland in any way they can,” it said.

“These are our dealers in Ukraine,” it continued, between a pair of photographs. “Mike, with his family… Anton, with his paddling crew.

“These are wonderful people.”

That is when the human impact of Russia’s war of aggression in Ukraine finally hit me in the gut. I’d been reading all week about families split by war, seeing images of with mothers, children and even pets fleeing west while men stayed behind, compelled to kill or die in a conflict they could hardly have comprehended weeks before.

Anton’s photo, all smiles and shakas from a snowy riverbank in Ukraine, could have been taken on any of a dozen rivers I’ve run in West Virginia, Colorado or British Columbia. And Misha’s family portrait looks much like my own, down to the way his daughter leans into his shoulder for comfort, as if it will always be there.

That familiarity is one reason the Ukraine war has captured headlines and occupied minds across the western world. These are people who find joy on rivers and mountain trails, and have chosen careers that keep them close to the outdoors. People like us. 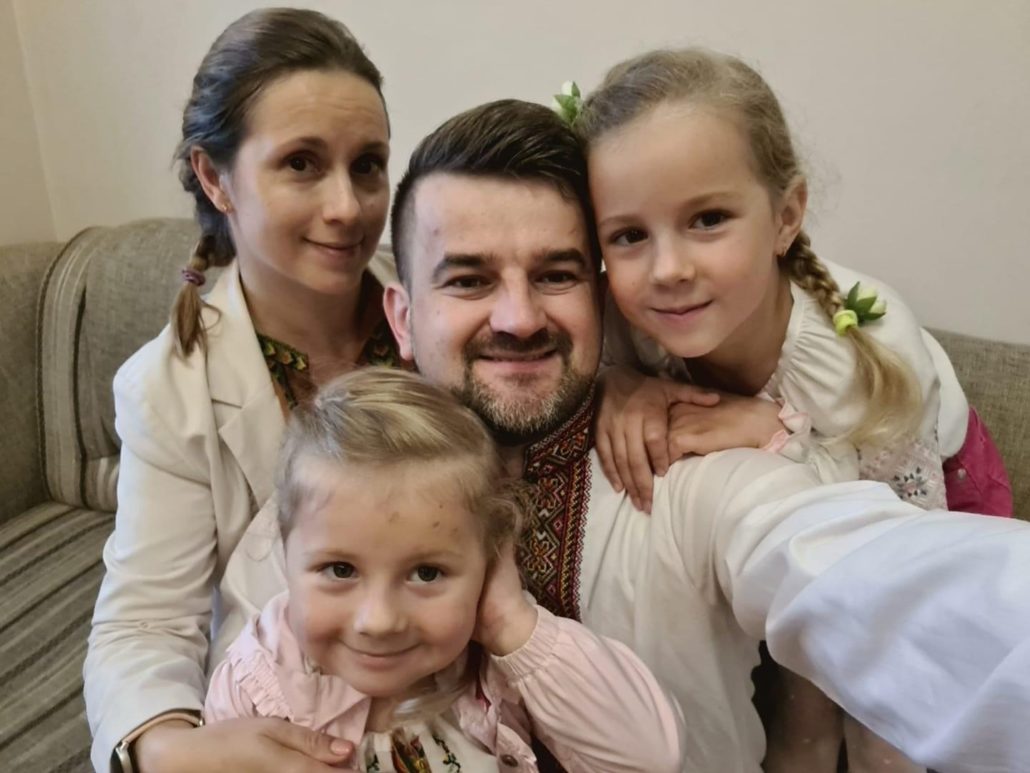 Pyranha is a U.K. company, with deep roots in the whitewater scene in the Southeastern U.S. and around the world. “We are lucky to live in a stable and peaceful democracy, whilst many live with the harsh reality of the many dreadful wars around the world,” the company said in the post announcing the fundraiser. “This war in Europe, in an area where some of our staff come from, where our customers are being bombed, brings that reality far too close to home.”

Pyranha’s staff will donate their labor, and several of the company’s suppliers have donated materials to make 20 custom kayaks in the colors of the Ukrainian flag. One hundred percent of the proceeds will go to The Disasters Emergency Committee (DEC), a major charity doing humanitarian relief in Ukraine.

Support from Pyranha’s dealers across Europe and North America was so strong that the company committed to making an additional 20 Ukrainian flag kayaks at cost, with proceeds also going to DEC. Two of the kayaks will be raffled for the cause, one in Europe and the other in North America.

Those not in the market for a kayak can purchase a raffle ticket or a “Drop Waterfalls Not Bombs” T-Shirt through the company’s North American webstore, or contribute directly to DEC or a relief charity of their choice.

The company expects the flag kayaks to raise about $100,000 for Ukraine relief.

Pyranha is molding 40 of its popular Scorch river-runners in the colors of the Ukrainian flag.

Pyranha is just one of many outdoor companies rallying to help Ukrainian war refugees. In the days after the Russian invasion, the Portland-based footwear brand KEEN made a commitment of 150,000 euros (about $165,000) in cash and products to support Ukrainian refugees arriving in Poland, Slovakia and Hungary. The company is working with Global Giving’s Ukraine Crisis Relief Fund to provide shelter, food, and clean water for refugees, as well as health and psychosocial support and access to education and economic assistance. Local distributors MM Sport and Outdoor Concept are partnering with KEEN to distribute donated footwear and other essentials.

The European Outdoor Group, an industry trade organization, has been coordinating relief work by members, with much of the relief work and supplies from member companies being coordinated through the Polish Outdoor Group and via personal connections forged in happier times. Case in point: Just weeks after completing an electrifying first ascent of the Southeast Ridge of Annapurna III, Ukrainian mountaineer Nikita Balabanov was working with Polish friends to collect sleeping bags and other essential equipment for people fleeing the conflict.

The Swedish chain Naturkompaniet put out a call for donated gear to its 30 retailers across Sweden and quickly collected six truckloads of winter coats, boots, sleeping bags and other equipment. The company partnered with Filippus, a small aid organization focusing on Ukraine, to distribute the aid in Kharkiv and other embattled cities. Naturkompaniet put the word out via newsletters and Instagram on two days after the Russian invasion began, and within hours customers were pouring into stores with donations. “The stores needed to call in extra staff to receive and sort the donations,” according to a report in Suston magazine.

Helly Hansen has temporarily suspended operations in Russia, and committed $200,000 to the Red Cross and pledged another $500,000 to the aid of Ukrainian refugees arriving in Canada, according to a report in Outside Business Journal. The North Face is working with its parent company and sister brands to donate $250,000 to the U.N. High Commissioner for Refugees (UNHCR), as well as delivering gear to Ukrainian refugees on the ground in Poland.

Patagonia has made financial donations to three aid groups on the ground, and to encourage customers to pitch in has committed to double-matching donations (for every dollar donated, Patagonia contributes two) up to $250,000, according to the brand’s European Facebook page.

The Cotopaxi Foundation has committed to matching up to $10,000 in consumer and employee donations through the humanitarian organization Mercy Corps. Canada Goose has suspended sales to Russia and committed more than $78,000 to the UNHCR, while Backcountry has partnered with local Red Cross organizers to send sleeping bags, jackets, and other gear for refugees arriving at the German border, according to OBJ. Backcountry has also donated $10,000 to the nonprofit CARE. Sawyer, a manufacturer of water filtration and insect repellent products, has donated 30,000 water filtration systems to multiple organizations currently administering aid to Ukrainian refugees.

Honey Stinger sent three pallets of its energy bars, chews and jells to help fuel refugees in Warsaw, Poland. In a tweet, the Steamboat Springs, Colorado-based company shared a shout-out to fellow outdoor brands standing together to support Ukrainian refugees and reiterated what everyone can do to help, with a link to the same company Pyranha is supporting with its waterfalls not bombs fundraiser:

“The need is great, let’s do what we can,” Honey Stinger tweeted. “Please consider giving to the Ukraine Relief Fund.”

10 Ways to Stay Dry When Camping and Hiking

Three Minutes of Mindblowing Footage Atop the Mont Blanc Massif