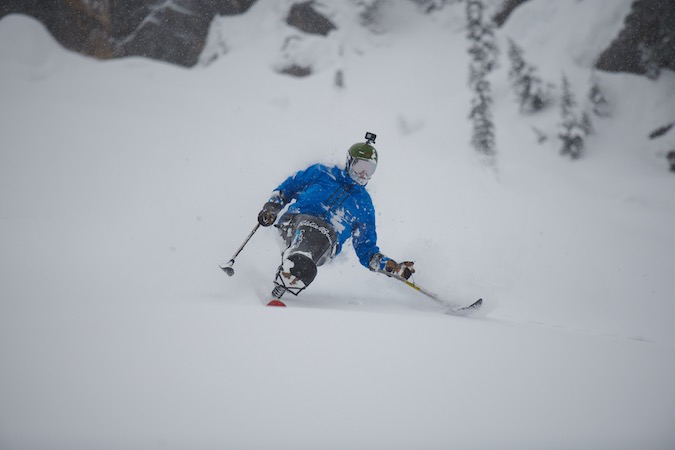 Trevor Kennison is one of the best, most exciting sit-skiers on any mountain in the world today, but he had a problem: traditional ski apparel made sit-skiing kinda miserable. Snow builds up on the lap, soaking the midsection and making chafing from zippers a given. Regular ski pants aren’t long enough to wear while sitting with bent knees. Jackets bunch up at the tummy and the pockets are impossible to use.

So Eddie Bauer and Kennison set out to design sit-ski specific apparel to meet the needs of adaptive skiers. Last week they released the BC Flyline kit, jackets and bibs just for sit-skiers. The gear turned out so well, it won the Innovation Award at the recently concluded Outdoor Retailer winter show.

“After years of skiing in traditional jackets and bibs, it became apparent that ski outerwear was not built for someone to use them in a sit ski like I was,” said Trevor. “Working with the design team at Eddie Bauer allowed me to make sure this kit had all the features I had ever wanted. There were numerous rounds of testing and fine-tuning. I would take the kit into the field for a couple days, then provide photos and notes on small adjustments for the designers to make until it was the perfect kit for a sit skier.”

Damien Huang, Eddie Bauer CEO, admits that the brand isn’t really sure what the market for sit-ski specific apparel is, but he’s not concerned. Eddie Bauer’s been one of the few brand to make gear for a wide variety of bodies for many years now (ed note: my wife, all 6’3″ of her, swears they’re the only brand that makes outdoors clothes that are long enough for her) and this slots nicely into their varied program.

The apparel line is now available at Eddie Bauer’s website.

14 Peaks: Nothing Is Impossible

Top things to do in Perth, Western Australia 2022

When Getting Sorta Lost is…Good?