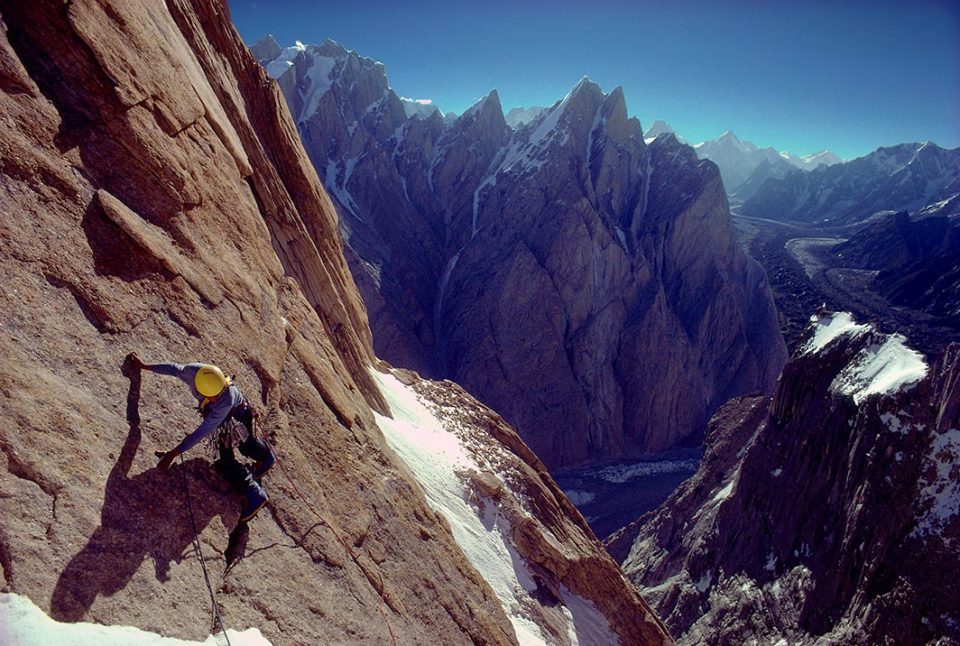 Walking down the hot and dusty main street in the little cowboy town of Bishop, California, your eye will be attuned mostly to passing cars, tourist storefronts, and a diaspora of climbing bums from all corners of the planet circling around gear stores like flies at a bug zapper. But look closely. You may see a rainbow standing out against the drab earth tones and dreadlocks, in shockingly vivid and surprisingly crisp colors. Keep walking. Round the corner. Step in the door. Enter the Galen Rowell gallery.

There could be no better place for it. Born in Oakland in 1940, it didn’t take long for Galen Rowell to escape the city and begin exploring California’s Sierra Nevada. At 10 years old, he was already joining Sierra Club wilderness outings to climb the region’s mountains and by 16 he was beginning to rope up on technical ascents in Yosemite.

By the age of 30, Rowell had become one of the most talented and prolific climbers of his generation. He established more than 100 new routes in the High Sierra, including the South Face of Charlotte Dome, Bear Creek Spire’s North Arete, and Mount Winchell’s West Arete. It is nearly impossible to visit an alpine cirque between Sequoia National Park in the south and Lake Tahoe in the north without finding traces of Rowell’s previous passage. He simply traveled everywhere, climbing all along the spired spine of the rough and rocky Sierra Nevada.

Though never formally trained as a photographer, his dedication to the art was as deep and successful as his vertical exploits. His images captured not just the raw and untamed beauty of the California wilderness, but the esprit de corps and zeitgeist of climbing in the 1970s and 1980s in the cradle of rock climbing civilization, Yosemite Valley. He had an uncanny ability to capture the ineffable beauty that seems to validate the climber’s risky exploits. By 1972, at 32 years old, he had become well enough known for his work to sell his automotive business and become a full time photographer.

Over the next three decades, Rowell would travel the world – often with his wife, Barbara – climbing, exploring and shooting photos. From major first ascents in the world of alpinism, such as Cholatse and Great Trango Tower in the Himalaya, to explorations of the southern icefields in Antarctica, he left few stones unturned in his wandering.

Rowell would begin to gain major recognition for his art in 1984 when he received the Sierra Club’s Ansel Adams award. For 20 years he would receive other awards, honors, and distinctions–not just for his photography, but also his writing. His book, Poles Apart: Parallel Visions of the Arctic and Antarctic received the Commonwealth Club of California’s Award for Literary Excellence in Non-Fiction in 1995.

On August 11, 2002, Galen Rowell, his wife Barbara Cushman Rowell, pilot Tom Reid, and Reid’s friend Carol McAffee were returning to the Eastern Sierra Regional Airport in Bishop from Oakland, California, when their plane crashed, killing all four passengers. The Rowells were on their way back from a photography workshop in Alaska.

As Tom Brokaw noted in the foreword to the book, Galen Rowell: A Retrospective, “Rowell was a man who went into the mountains, into the desert, to the edge of the sea, to the last great wild places in the world to be absorbed by their grace and grandeur. That is what he did for himself. For the rest of us, he shared his vision with-click-the release of a shutter, creating photographs as timeless, as stunning, and as powerful as nature itself.”

Though Galen Rowell is gone now, his work lives on in the eastern flank of the High Sierra, in Bishop, California, in the Mountain Light Gallery. You can walk in all year round and see hundreds of Rowell’s breathtaking images. I’ve been there many times to ogle the images, and each time I see something new – some nuance of shadow, some play of light or color, that I never noticed before. I’ve stood breathlessly in front of pictures of places I’ve been, feeling the same feelings I felt when I was there in real life. The gallery is a true gift to any east side wanderer.

But I would recommend you step back outside into the bright Bishop day, and turn westward towards the Sierra crest. Drive your car to one of the many trailheads that wind up into the hills, park, and set out on foot. This land that John Muir called the Range of Light is the true centerpiece of Rowell’s life’s work; more so than anywhere else he traveled in the world.

“My interest in photography did not begin with a burning desire to see the world through a camera,” Rowell wrote, in an artist’s statement in 2001. “It evolved through an intense devotion to wilderness that eventually shaped all parts of my life and brought them together. I began to express this devotion in a physical way through climbing and hiking, and in words through lectures and articles.”

We can all gain inspiration from the thousands of emotive and evocative photographs that Rowell left behind. But to see what inspired Rowell himself, all you need to do is set out on a mountain trail to anywhere and keep an eye out for the good light.

A 7-day itinerary for Madeira, Portugal

The Land Has Burned – Lengthy Reside the Panorama

Greatest Health Hikes in Los Angeles for the New 12 months