The blade pulled firm as it sliced, then caught. Energy swept through my body. I was in that moment, acutely aware of being alive. As the blade completed its arc, darkness engulfed it. In the foreseeable distance, ice didn’t seem to pose any threat to our continued, powerful stroking. It was all open water. Eighteen months of planning had reached its crescendo. One last look back over our shoulders gave us a glimpse of our potential salvation and its ant-like inhabitants scurrying back inside from the cold as the 120-meter-long, ice-strengthened polar tourism ship sailed out of sight behind an iceberg.

Here we were, two polar sea kayak guides with two kayaks, setting off for a two-week journey of self-supported adventure, and whatever else came our way. The enormity of place and the diminutiveness of being swept over us, much like how we had seen the powerful katabatic winds of the polar regions sweep down glacially charged valleys and out across the surrounding waterways. To us, immersion in vast wilderness places, like that of the Antarctic Peninsula, the sprout-like landmass that protrudes from the limitlessness of the Great White Continent was what we sought. Pilgrims on a journey. With the entire landscape of rugged icy peaks, rambling glaciers and drifting icebergs being reflected back off the unbroken sea surface, we were thinking about adventure, and what it means to us. 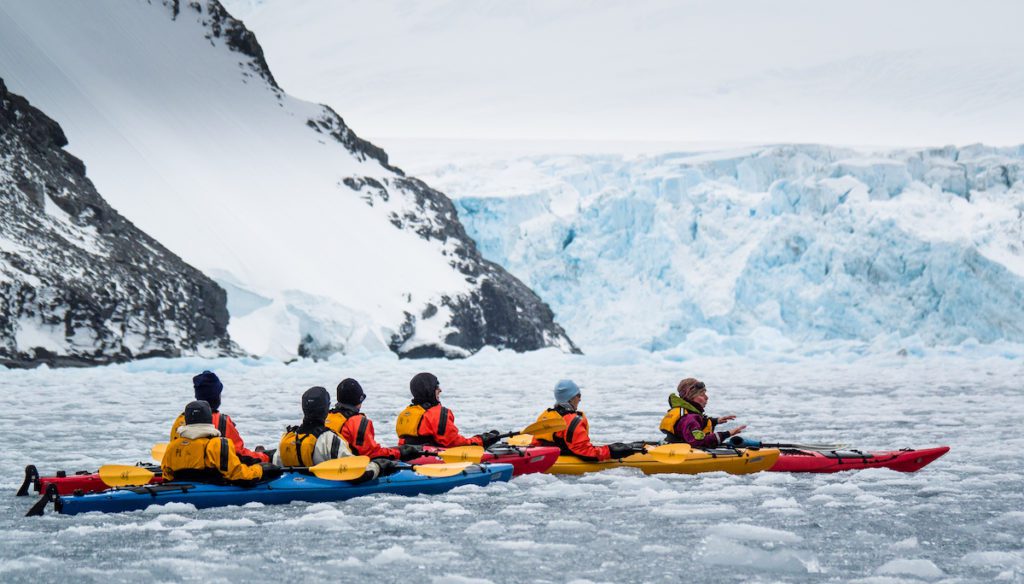 To us, adventure is a mindset as much as it is an experience.

From the wonder of seeing their first iceberg to being  hounded by stormy seas in the notorious Drake Passage, through the dread that floods over them as they realize they have signed up to kayak in this place, to the fear of actually departing five days later, all the while encouraging them to open their heart and minds to let in the entire mass of Antarctica, along with its millions of fluffy penguins, majestic whales, and curious seals.

The mental state of a guest is something to be treated with care and respect from the very beginning. The key to success is understanding and setting the client’s expectations and henceforth managing them accordingly. A good guide takes into account that a client’s mindset and attitude towards adventure is totally different from their own. The experience levels are polar opposites.

Some guests come seeking adventure, some do not. Some come seeking solitude and solace, some look to meet likeminded and adventure driven people. Some come seeking the selfie of a lifetime. Meeting the expectations of each of these beings within the same set of physical constraints whilst out to sea is the game. Creating early rapport and a safe, open space for sharing, pre-empting reactions, and of course, having fun, are all elementary concepts in guiding. But it’s creating the atmosphere to manage expectations that matters the most: maintaining calmness and composure, recognizing and responding to individuals’ concerns and worries. Trying to create an even playing field for all types of personalities, on an uneven tide. 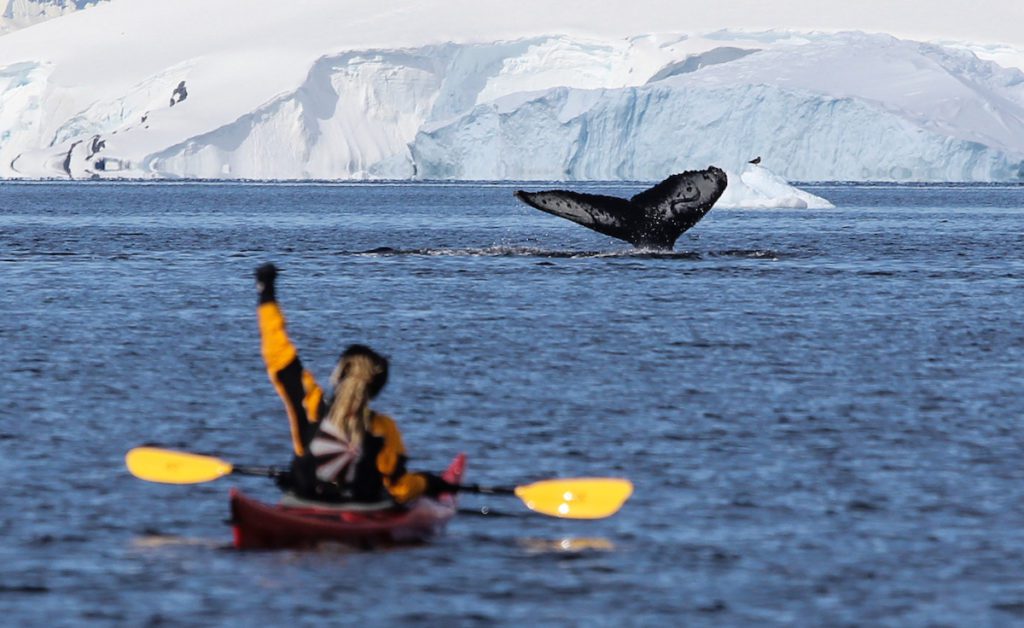 Even after hundreds of kayaking excursions, some days the nearly vertical walls of the mountains reaching out of the semi-frozen sea look like a 2D cutout, a third dimension seemingly lost. The blue of the inner sanctum of icebergs is so blue, your mind fizzes at the concept. The glimpse of the eye of an Antarctic Minke Whale a meter beneath your kayak, 10 tons of creature so graceful that the word has simply been redefined. It takes a deep, dark soul not to be touched by Antarctica; to not be awed, honored and beguiled. When I’m on a personal expedition, I am at liberty to gaze at the environment around me as much as I want. I’m confident in both mine and Sophie’s skill in the conditions, I know that we can handle the situations thrown at us by Mother Nature and I know that we’ll make educated decisions when faced with situations in the wild. When playing the role of a guide though, I cannot let myself be drawn in too deeply. Those eyes that are so easily captured by the vertical icebergs or the dark blue depths below must be fully alert.

When we’re guiding, we’re dealing with reality, hazards, consequences, likelihood, mitigation measures. Risk is like taming a wild horse. And real risk is a very different beast to perceived risk. Oftentimes with inexperienced explorers, it’s their reaction to something that increases the likelihood of incident. In our personal adventures we deal solely with real risk. We’re competent adventurers, we’re fully trained, we know what we’re capable of as kayakers and, most of all, we know what to expect from the environment we explore. On the other hand, perceived risk presents itself as the blinkered unknowingness that our minds can sometimes fool us with when we are not fully versed in our surroundings – something that our clients have to face as they set off of their Antarctic expeditions.

We’ve all the seen the tag line “…after falling into the icy water, he/she only had minutes to live.” Capsizing a kayak—and therefore a swim—in the frigid waters of the Antarctic brings for many newcomers mental scenes of their final moments on this planet. But for us as guides, this “hazard” is near the bottom of our list of concerns for the actual well-being and safety of our guests. It’s not a real risk. It’s the type of risk a client imagines is likely, considering the expedition they’re on. We understand that dressed in a Drysuit and with many other risk management strategies in place, immersion-induced hypothermia is extremely unlikely, especially with the ship anchored relatively close by.

But then, a client who nonchalantly paddles up to touch a house-sized iceberg is something that gives polar sea kayak guides recurring bed sweats for decades. To us, an iceberg is a ticking ice-bomb with a lengthy list of disastrous consequences if interfered with. To them, it’s the opportunity for a great tale for their friends and family. Situations like this are difficult for guides – when the client is unaware of the extreme risk they just placed themselves and others in.  The client has just put themselves in real danger but its imperative that the guide keeps their calm and composure. Any indication that the guide is worried or stressed will be reflected in the behavior of the client, and that is when the real problem begins.

At times guiding inexperienced people through one of the most unpredictable places on the planet seems like madness, seems like we are putting them through unnecessary adversity if conditions start to be unfavorable. But, are they ever actually dealing with adversity? 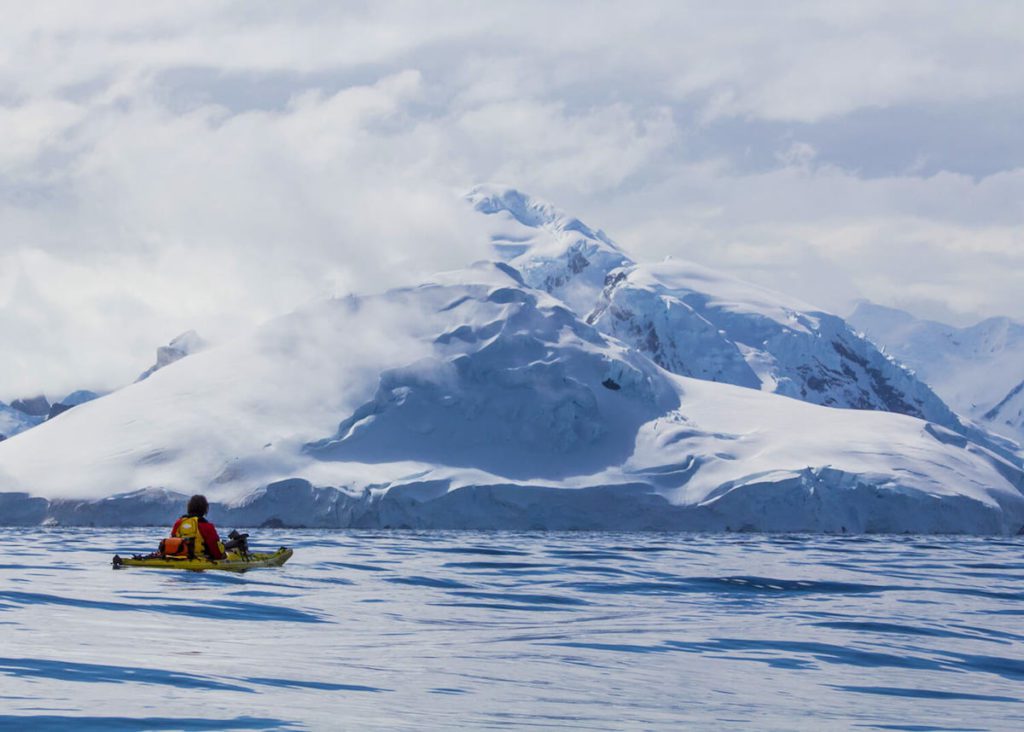 We rarely, if ever, find ourselves in actual adversity that would put our lives in danger. More often than not it is a state of our mind. We perceive it. We feel that it is, but later reflection reveals it most likely was not: it can be handled. It won’t be the end. Regardless of what we’ve faced, it teaches us lessons about ourselves and how we can react and deal with challenges when they actually strike.

We as professional guides are trained for and adapted to adversity in nature, in the natural world. Yet in all walks of life, different people are adapted to dealing with different adversity: business leaders to adversity in the financial world; doctors to the adversities of ill-health, of sickness and of dying. All of us are changeable machines, we are adaptable. We enjoy wilderness and what it does to us as human beings. People are so disconnected from this planet, from nature that when you immerse them in it they change, they become something different and its always for the better. Adversity is always relative; relative to our mentality. Change your mentality and you change your tolerance for adversity. And seeing this change brings a lot of satisfaction as a guide.

Top things to do in Adelaide | Travel tips of Adelaide

Heat Up Camp With These Straightforward-To-Make Pumpkin Pancakes