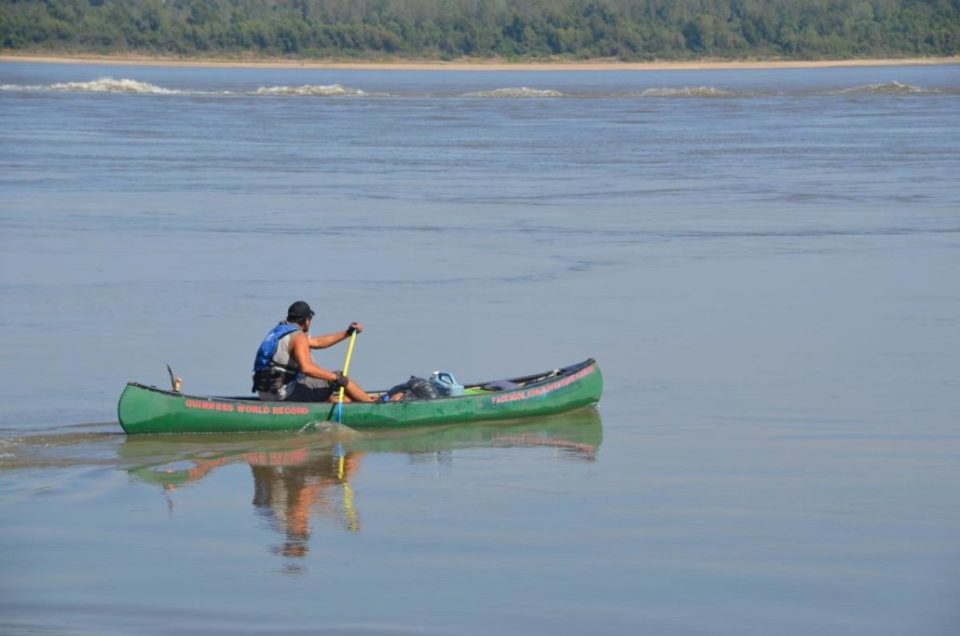 It’s fair to say that Aaron Carotta was in a bad place when he started down the Missouri River.

After a cancer diagnosis in 2008 he’d remade himself as “Adventure Aaron,” traveling to more than 80 countries, sharing his travels on social media and parlaying them into self-produced television programs in New Zealand and the United States. Along the way he beat the cancer, and met a girl.

“I stopped doing what I love and tried to domesticate myself,” said Carotta. “We got married and she left 14 days later. That just blew up my world.”

His friends advised him to get professional help, but Carotta had other ideas.

“I knew deep down inside what I was passionate about, and what travel and adventures do for me,” he said. He began to fixate on a plan he’d developed in 2013, before he met the girl—to paddle the length of the Missouri and Mississippi Rivers and set a new Guinness World Record for the longest solo paddling journey. One day in June, 2016, he got in his car and started driving north, to the headwaters of the Missouri.

A good talker, Carotta worked the phones as he drove. He didn’t have a canoe or money to buy one, and he couldn’t very well paddle 5,000 miles from Montana to Florida without a boat.

That’s when the first of many so-called River Angels came to his aid. Joe Kirchner at Big Boys Toys in Bozeman Montana listened to his story and decided on the spot to give him a weather-worn Old Town canoe. It had no seats, and the yellow plastic paddle that came with it was about three times heavier than anything an experienced canoeist would choose to paddle the length of North America’s longest river system, plus a few hundred miles on the Gulf of Mexico.

“I wasn’t a paddler,” he says. “I actually was gifted the book The Complete Paddler on Day 42. I open the book and the first thing was ‘Do not go down the Missouri in an open-top canoe.’”

Carotta bought a kid’s tent at WalMart and stocked up on provisions. He would live the next eight months on Chef Boyardee and instant oatmeal, stopping occasionally to obliterate an all-you-can-eat buffet.

“I was down to one can of food. I paddled around the corner and there was a group of people sitting in lawn chairs,” Carotta recalled. “I asked if this was the campground and they said, ‘It is now.’”

The group took him in and fed him as much fresh-caught catfish as he could eat.

“They called themselves The Kathmandu River Rat Community. I wrote them a letter that said ‘You guys aren’t rats to me. You’re river angels.’” Later he learned the term is common among paddlers long-distance. All along his journey, Carotta would connect with dozens of people who would help with food, gear or logistics, and ask nothing in return. They would tell him what to expect on the river, and often introduced him to the next river angel downstream.

“I learned to accept the help people offered, and use the little money I had to go to the Dollar General and buy a six-pack of thank you cards,” he said. As part of his trip, Carotta worked to raise money for imadopted.org, an online community for adoptees and their families. “It came full-circle, and I realized on Day 88 that I’m being adopted by people on a daily basis.” 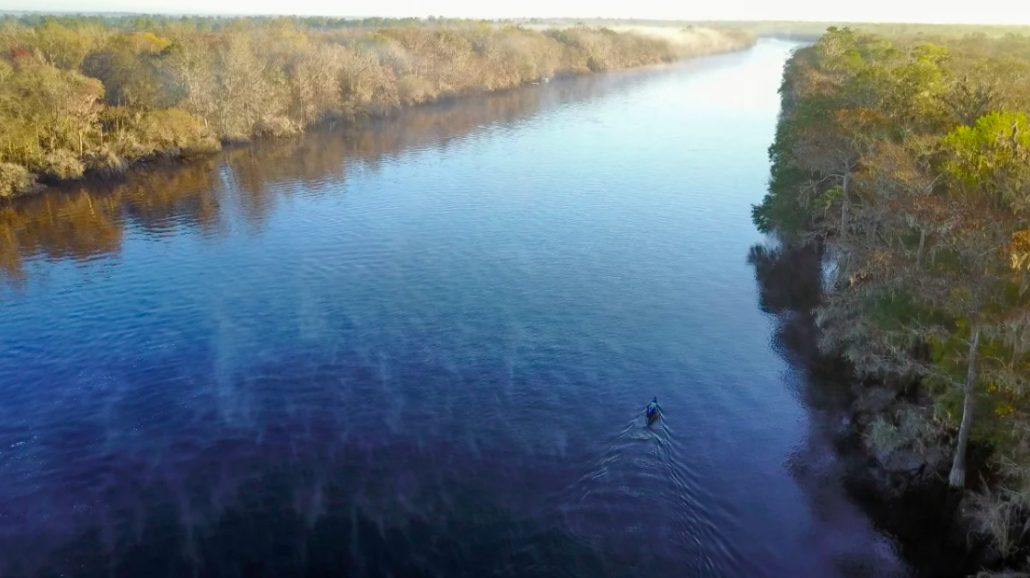 Carotta never developed a proper J stroke, but he learned to swing that plastic paddle, laying down three big powerful strokes then switching sides, hour after hour, day after day. He chewed through miles by the hundreds, becoming leaner and more seasoned with every passing week. On a diet of canned meatballs and boxed wine, his 6’4” frame went from 240 pounds to less than 200.

“I had four vices—red wine at night, coffee and music. It just really kept me in rhythm,” he said. “I started really holding on to the meanings of songs. I’d hear Simple Man or Freebird—which I never really knew the lyrics to before—and it would just make sense.”

That’s not to say he didn’t have his trials.

On Day 22, in the isolated country around the Montana-North Dakota border, he flipped on an eddyline and lost all of his gear. Utterly defeated, he walked five miles to the nearest hotel, determined to quit. But when he tried calling friends to come get him, nobody picked up. Carotta walked back to the canoe and kept going.

Later, out of provisions on Lake Owyhee in North Dakota, he battled fierce headwinds for three days. He pulled a fishing lure off a snag and tied it to the thwart of his canoe. Miraculously, he caught a striper.

“Striped bass is what I used to catch with my grandfather, so then it became spiritual,” he says. “I ended up catching one fish each day for three days and I made it to Mobridge.” There a river angel calling himself Ghost Rider treated him to an all-you-can-eat buffet.

Carotta vowed to quit twice more but somehow always kept going. Near the confluence with the Mississippi he paddled more than 100 miles in 24 hours. He made a brief detour up the Ohio, thinking that it might be a better route to the Atlantic, but thought better of it and returned to the Mississippi. He later portaged to the Amite River, avoiding the lower Mississippi’s heavy barge traffic by using a route once taken by the explorer Pierre Le Moyne d’Iberville.

He reached the Gulf of Mexico and turned left, following the coast toward Florida. Crossing Mobile Bay, he went seven miles offshore in his open canoe—something, we should note, that no one should attempt.

“I had a scary moment when I what I thought were barrier islands turned out to be barges, and they were coming right into my line,” he says. “If I knew what I know now I probably wouldn’t do that again.”

Carotta finished his journey on the Atlantic Coast of Florida in February 2017, after crossing the peninsula via the Suwannee and St. Mary’s rivers. He’d travelled about 5,000 miles in 233 days.

Throughout his journey, Carotta kept careful records and collected affidavits from the people he met along the way—required by the Guinness organization to document his claim to the “longest solo canoe journey,” a record he ultimately decided not to seek. Along the way, he realized his journey wasn’t about the record. It was just about the journey.

His expedition is a lesson for everyone who dreams big. It shows that you don’t need an adventure pedigree, expensive gear, or even much experience to embark on a trip that can change your life and the life of others. It’s a reminder that sometimes, the best plan is to trust in the goodness of others and not to get bogged down in the details.

Carotta has since embarked on another adventure, this one involving a secondhand rowboat and a thin line drawn around the world. It hasn’t gone so well as the first, but that is a story, and a lesson, for another day. Stay tuned.

Unraveling the Plight of the Pinyon Jay