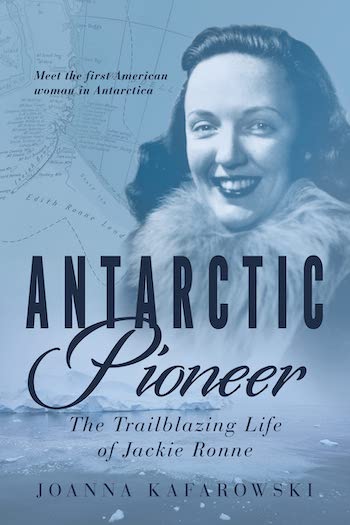 Just a little over 30 years after Roald Amundsen stepped foot on the southern tip of our planet, Antarctica was still ramping up as a hotbed of exploration, fueled by the budding cold war and nations scrambling for all the unflagged pieces of dirt around the globe. Prior to any treaties determining who can tread and where they can tread on the loneliest continent, the land mass had to be explored and mapped in detail. While some governments funded large-scale expeditions, the United States had concerns elsewhere, so private funding predominated most expeditions. A small group of men from northern European countries and North America became quick go-to experts on polar exploration, often creating close friendships, polite backstabbing and fierce rivalries. Into this fray, stepped an intelligent, independent and optimistic young woman in her twenties, fresh out of college with a short, but substantial career in some of the most important and influential departments in the US government.

Jackie Ronne wasn’t known very well outside of the Washington D.C. social set, except for the steadily growing culture of explorers and, more specifically, the tight sub-culture of polar explorers during a brief period after her husband’s death and before her own. After she died, it seemed whatever legacy she finally earned as a pioneering explorer died with her, save for a few plaques here and there and, of course, the Ronne Ice Shelf (originally “Edith Ronne Land”), which her husband, Finn Ronne, named for her. That is, until explorer and author Joanna Kafarowski gave Ronne the recognition she earned in Antarctic Pioneer: The Trailblazing Life of Jackie Ronne.

To say that Ronne was yet another victim of a patriarchal society, however, is painting a far too blunt a picture on an extremely nuanced set of circumstances that led to decades of ignorance and oversight by not only the explorer community, but by the world as a whole. Because, it wasn’t just Finn Ronne who hogged the spotlight in his quest for respect and fame, but also Jackie Ronne herself who not only avoided the spotlight, but willingly stayed in the shadow of her husband with regards to the Ronne Antarctic Research Expedition (1946 – 1948).

She openly stated on many occasions her efforts to keep from drawing attention away from her husband to the point that even after his death, she rarely asserted her role as an equal partner on the expedition, rather than simply a housewife who tagged along. It was only at the urging of friends, colleagues and her daughter, Karen, that she finally penned her own account of the expedition; having ghost-written Finn Ronne’s account almost 50 years earlier and allowed only his name as the author.

During the post-war 1940’s and 50’s in the United States, the cultural molds were quickly cast for men and women, with (now) horrifyingly comical commercials, advertisements, home-economics classes, movies, television shows and laws dictating very rigid roles for women, primarily as support systems for men. One of the overriding results of such passive and active efforts was to create a system by which women were valued by others, and most importantly each other and themselves, based upon how they fulfilled those supporting roles.

Ronne worked as hard, and probably harder, than her husband to plan for their team’s Antarctic expedition for years, since the moment they met. It wasn’t until the last few days, before departing on their ship from Beaumont, Texas to Antarctica that Finn realized he couldn’t possible run the expedition without her. In spite of this realization, he rarely gave her much more than a nod of credit as an equal. At Jackie’s urging, another team member’s wife was invited along at the final hour, even against the wishes of the woman’s husband – with the idea that Jackie would benefit from a like-minded person along to counter the buckets of testosterone in the cramped quarters.

As it turned out, the women’s relationship quickly cooled in the wake of their husbands’ open vehemence towards one another. In the rush to find high quality professionals to conduct and support the expedition, the Finn’s neglected the first priority of a large-scale expedition: pulling together a cohesive set of personalities. Stuck in a tiny cabin at the bottom of the world for a year with total darkness for several months is difficult enough for people who rank high on the Mister Roger’s scale, but when 20+ anti-wallflowers find themselves against the ropes, then the group hugs are few and far-between. Red flags flapped wildly even on the docks where the Port of Beaumont was moored in preparation for the expedition, with open arguments and lines drawn in the sand among some team members.

These festering resentments combined with Finn Ronne’s militaristic style of leadership over civilian volunteer explorers guided the milieu straight down the toilet, though the team member’s professionalism persevered to produce extremely valuable information, maps and data that form Antarctic policies even to this day. Throughout the oft torrential atmosphere, within and without the walls of the station, Jackie Ronne graciously guided her husband, quietly compiled scientific data and wrote all the reports wired back to the world – describing the wonderful team members and valuable work being accomplished. It was this mid-cinch persona that Jackie Ronne provided for her public viewing, including for all photos doing up her hair, wearing lipstick and nail polish while on a serious and harsh Antarctic expedition.

Finally, after a few years back home in 1960’s Bethesda, Maryland, after Finn Ronne, 20 years her senior, retired from the military, Jackie finally started to chip a crack or two in the mold. Instead of spending more time as a family, Finn doubled-down on his lecture circuit and book tours, leaving Jackie the sole parent for their daughter, Karen (born after the Antarctic expedition) and his personal representative for the dogged social and professional set in D.C. In spite of it all, Jackie persevered until Finn’s unexpected death. Only then did she start to shine on her own and became a colleague and mentor for other female explorers and also lobbied for women to be admitted into The Explorers Club in the 1970’s. Eventually, she served as president of the Society of Woman Geographers from 1978 to 1981.

It was only in her final few years, at the behest of her daughter, that she wrote her own account of the expedition. By then, her story had faded into history and publishers weren’t interested, so Beaumont philanthropist and owner of the Clifton Steamboat, David Hearn, funded the publication of her autobiography and developed a display of the Ronne Expedition in the Clifton Steamboat Museum in Beaumont, Texas where it existed until the COVID pandemic when the museum was forced to close. My family has old roots in the southeast Texas, where my parents were around 10 years old when the recommissioned US Navy expedition ship the Port of Beaumont departed for the Antarctic. I spoke with Hearn’s granddaughter, Sarah, who explained that the entirety of the exhibit was given to Jackie Ronne’s daughter, Karen, shortly after the museum closed.

Beaumont and the surrounding area is a unique launching spot from which incredibly talented people emanated, such as athlete Babe Didrikson Zaharias, football legends: Jimmy Johnson and Bubba Smith, musicians Edgar and Johnny Winter, Tobias Traylor, Janis Joplin, Kevin Russell, ZZ Top, Mark Chestnutt, Bobby Horton, George Jones, Tex Ritter and artist Robert Rauschenberg. Surrounded by such fertile ground, it was quite appropriate for the Ronne Expedition to launch from this otherwise fairly unobtrusive port along the US third coast.

Kafarowski left no stone unturned in her extensive research with regards to Jackie Ronne, not only with regards to the Ronne Expedition, but when it came to Jackie’s life, thanks in a great part to Jackie herself, who produced a voluminous number of articles and letters throughout her life. Antarctic Pioneer: The Trailblazing Life of Jackie Ronne exceeds standards with a healthy index, citing her sources and the influences Ronne had during her life and a list of those who contributed to her success. The index is as thick as a normal chapter and rife fodder for enthusiasts interested in historic expeditions.

Jackie Ronne’s life and legacy are also great lessons in perseverance when achieving greater goals. Ronne never wasted energy comparing herself to men. She just did what was required to reach her goals.

Ronne died in 2009. Antarctica’s Ronne Ice Shelf is named for her. Ronne was awarded a special Congressional Medal for American Antarctic Exploration and was a Fellow of the Explorers Club.

The best places in Arkansas for history, culture and outdoor adventure

Book Excerpt: Between an Avalanche and a Hard Place

Hello! Quick question that’s entirely off topic. Do you know how to make your site mobile friendly? My web site looks weird when browsing from my iphone. I’m trying to find a theme or plugin that might be able to correct this problem. If you have any suggestions, please share. Thank you!