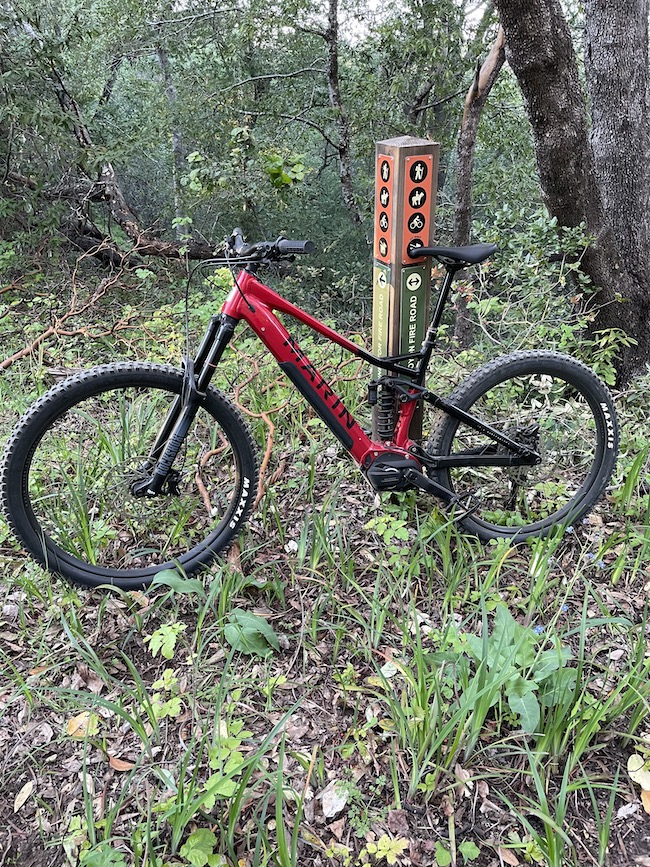 I’ll get right to it here: I haven’t had this much fun on a bike since I was six years old. That bike came from Santa (courtesy of auto supply chain Pep Boys, oddly enough) and was a blue Huffy BMX bike with blue checkerboard bar and top tube padding. I will remember it until the day I die because it was my first real (ish) bike and it opened an entire world to me.

That’s how the Marin Alpine Trail E1 feels too. This one I had to buy myself, no thanks to Santa, but because it comes from Marin it’s as close to a bargain as you’ll get in an e-bike. But I’ll come back to that in a moment.

I’ve ridden other e-mtbs from Specialized and Rocky Mountain and they put great big smiles on my face too. But the Alpine Trail E1 hits a sweet spot between performance, comfort and bliss-magnifying fun that I’ve not felt on any other bike, electric or otherwise. Sorry to gush, but it’s that good. Are the new Transition or Santa Cruz e-bikes just as fun? Yeah, probably, I don’t know, I haven’t ridden those. But they’re also probably at least $2,000 more.

The Alpine Trail E1 rings up at $4,899, MSRP. It’s been around for a season or two now, so you may be able to find a deal somewhere, but that’s already a bargain, relatively speaking. For that you get a robust aluminum frame with a RockShox 35 Gold RL fork (You’re gonna want to upgrade that) and a Rock Shock Super Deluxe Coil R, a solid bit of squish for a bike this freakin heavy; it weighs roughy 55 pounds, depending on size, how much mud is on it, your tire/wheel setup, etc.

The drivetrain is all Shimano Deore with a 10-speed, 11-46T cassette. Brakes are Shimano too, their budget house MT420s with massive 203mm rotors front and rear. The E1 uses the Shimano Steps E700 motor with 250w and 60nM of torque power.

Smartly, Marin mulletted this baby with a 29″ front wheel and a 27.5″ out the back. The smaller rear wheel is welcome on a bike this damn big. Wheelbase on the XL I have is 1288mm. And, yeah, I mentioned it weighs 55 pounds. But that smaller rear wheel makes the bike feel so much nimbler than you’d expect. Headtube angle is 63 degrees, while the sea tube is 78 degrees, both standard hi-perf numbers. You get 160mm travel up front and 150mm in back—this rig is meant for pointing it down some very steep stuff, pinning your ears back and saying a prayer or twelve.

And this is the whole benefit of a bike like this. All of the downhill fun with none of the climbing penalty. Actually, that’s wrong. Climbing is not only not a penalty, it’s fun for its own sake. My fave local trail is a buttkicker more geared for xc greyhounds than big-travel slayers, but when there’s nobody in sight, I love switching the Alpine into “trail” gear (one of three power settings, Eco which basically just compensates for the wight of the bike, Trail, which has always felt like plenty, and Boost, which is so powerful it feels uncontrollable over tricky sections and since the bike tops out at 20mph anyway, is only useful for the steepest flat climbs) and flying up hills I normally grunt and sweat over. Of course, the joys of e-bikes are that you can still grunt as much as you want, and burn just as much energy, you just go much, much faster.

Typically, on the above trail riding a standard bike, my heart rate maxes out around 170 for the climbing stretches and it takes me about an hour and half from my front door on a round trip. On the Alpine E1, my heart rate maxes out at the same 170 on the tough bits, but I do the same ride in 40 minutes. That’s the difference between squeezing in a full ride during lunch or not riding at all.

Plus, with a bike like this, you can spot a fire road that seems to climb vertically, wonder what’s on the other side of it, and then…just pedal up the thing without bonking on ruining the rest of your ride. Exploring otherwise unclimbable fire roads on a bike like this is less a sufferfest and more a joyous recon.

Of course, that’s a feature of all e-bikes, not the Alpine E1 in particular. I think what makes this bike so damn good are two things. First, it’s very comfortable. I’m about 6’1″ and I am nice and cozy on an XL. My wife is 6’3″ and she is nice and cozy. My neighbor is 5’9″ and he fits great on this bike. I don’t know enough about the geometric wizardry it takes to pull that off, but it just works. This is a great bike for all day adventures because of that comfort.

Second, the price. This is a burly enduro bike with beefy suspension that handles like a dream, can tackle black diamond runs, that has a freaking motor, and is less than $5k. The cheapest Specialized e-mtb is nearly a grand more and it isn’t specced as well nor half as capable. Same with Orbea. Trust me, you don’t wanna see the MSRP of the Santa Cruz or Transition e-bike.

Marin is simply kicking ass when it comes to value. The wheels on some of the mid-level Marins need upgrading and I’m definitely swapping out the cheap fork on this Alpine E1 as soon as I can afford to, but I don’t have to, it’s perfectly fine as is. Their Rift Zone line of full suspension “down country” bikes are, for my money, the best all-rounder mtbs on the market right now for the price. They may have been asleep at the wheel for awhile there in the 90s and early-mid 00s, but no other brand, short of DTCs like Commencal, can touch them for value. But Commencal doesn’t remotely have the range, and has almost zero customer service.

The only thing that bothers me about this bike is the little flap that covers the charging port at the motor. It WILL NOT stay closed. I’m concerned mud or water will get in there and corrode the innards. Every ride I have to engineer a new fix to keep that little door closed. Also, my god the weight. You don’t notice it so much when up and riding, but muscling it around the garage is hilarious sometimes. It hasn’t happened yet, but I’m going to tip this over on my shins at some point while putting it away vertically, I know it.

E-bikes aren’t yet for everybody. I know that, we at AJ know that, and you know that. And even though I’m pro-e-bike, I won’t ride this all the time. It stays in the garage for most rides unless I specifically need or want an e-bike. When it’s time to explore otherwise joyless climbs, to run laps on trails (with miserable climbs), or to squeeze in a quickie at lunch (on the bike, weirdos), it’s the go-to.

The best travel destinations for LGBTQ+ travellers in 2022

When Recreationists Have Too Much Clout on Public Lands