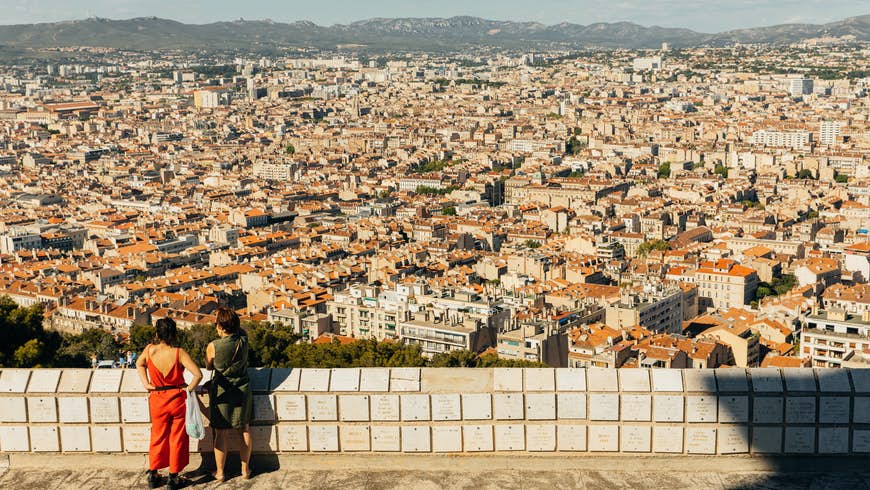 Marseille’s reputation as a frenetic, fast-paced port city in France’s smoldering hot south precedes it and navigating its noisy, traffic-clogged streets can be exhausting. But the revitalizing, big blue Med is never far away and with some savvy planning and the wind in your sails, getting around can be a breeze.

Despite its size – this is France’s second-largest city – the city center is compact and can be navigated on foot. An efficient network of city buses, boats, trams and a two-line metro makes light work of accessing further flung parts of the city, including its long stretch of beaches and offshore islands. In summer, bike or boat is the best way to get around – the metro is stifling. Year-round, visitors with a Marseille City Pass (€27/37/43 for 24/48/72h) have unlimited access to public transport, including shared bikes.

Bus it from the airport into town

Trams and buses run by public transport company RTM use the same tickets as the metro. Buy tickets from machines at tram stops and on buses, or at ticket desks inside Gare St-Charles and at the Espace Infos RTM on rue des Fabres. Bus drivers sell tickets but they are pricier – €2 instead of €1.70 for a single journey.

Electric buses only service a couple of lines, but the city aims to have 75 electric buses in its 627-strong fleet by 2024 and the entire network electric by 2035.

Forge new connections on your next adventure with the latest advice from our weekly newsletter.

To cross the city quick, take the metro

Most metro stations require a hike up/down steps. Those in wheelchairs, with pushchairs or young tots can plot the best route on the RTM website or mobile app. Both also locate staircases and ascenseurs (elevators), and indicate if the latter is “en panne” (broken) or “en entretien” (undergoing maintenance work).

Set sail across the port or to an island

Explore France’s oldest port and largest cruise hub afloat. At the Vieux Port the vintage cross-port Ferry Boat that yo-yos across the water from the town hall on quai du Port (north) to place aux Huiles (south) is the world’s shortest ferry ride. The toy-like boat – operated by RTM – takes less than five minutes to cover the distance (238m) across the port. Tickets are a snip at €0.50.

Seasonal RTM navettes maritimes (shuttle boats) sail from the Vieux Port to the northern suburb of L’Estaque and La Pointe Rouge, known for its beaches and rocky coves. Boats continue to the fishing village of Les Goudes, popular with families on summer weekends. A scenic voyage aboard the Frioul Express to Château d’If and the rocky Îles de Frioul is a Marseillais rite of passage.

Rent a bike or e-bike to pedal to the beach

Cycling in downtown Marseille is a nerve-racking experience – the city is one of France’s least bike-friendly cities. But two wheels are convenient for cruising south to the Prado beaches or escaping the city heat on an exhilarating day trip feature to Les Calanques or elsewhere along the coast.

Grab a city bike from one of 130 downtown bike stations in public bike-sharing scheme Levélo. It costs €1/5 to inscribe for one week/year, and then €1 per hour – the first 30 minutes is free. Plenty of outlets in town also rent bicycles. For electric-assisted e-bikes, pick up a shared Lime or Dot e-bike from a free-floating station, or try EasyMove at the Vieux Port or Fada Bike; the latter runs fantastic themed guided tours.

The dedicated, two-way cycling lane winding 2km along Corniche Président John F Kennedy is part of a meager 85km of bike lanes planned for the city by 2024 (130km by 2030). Keep tabs on new lanes and pinpoint the best route in real time from A to B with the excellent navigation app, Géovélo.

For sea views, scoot along the silky smooth seafront

Cruise along the wide, coastal sweep of La Corniche by trottinette électrique. These lightweight electric scooters reach speeds of 25km/h and are handy for covering longer distances in the city. They can be carried on buses and the metro, allowing you to mix-and-match public transport. Pick up wheels from one of 900 public-sharing e-scooter stations operated by Lime, Bird or Voi; reserve and pay minutes in advance via the phone App or station terminal.

At the Vieux Port, Easymove rents fuchsia-pink e-scooters and all the paraphernalia – obligatory helmet, horn, saddlebag, basket, wing mirror. Rental costs €10/30 for one/four hours and a Virtual Guide (€15) maps out itineraries in and around the city. If an Audrey Hepburn moped is more your style, go for a two-seater, Pink Style 50cc e-moped (€59/99 half/full day).

Marseille is divided into 16 arrondissements but, as every Marseillais will tell you, the city boasts 111 quartiers or villages. Walking tours organized by the tourist office lead curios away from tourist-loved Le Panier or Vieux Port into intriguing, off-the-beaten track ‘hoods such as La Treille, Chutes-Lavie and St-Jean du Désert. Walking also creates a precious op to delve into green Marseille. City parks promise hours of scenic promenading.

Marseille’s public transport system is challenging to navigate for travelers with disabilities. Accessible bus stops serviced by ramp-equipped buses are indicated on public-transport maps, online and in the RTM app; accessible stops can be in one direction only so check route maps carefully. All trams sport ramps and waist-high buttons inside to signal you want to get off at the next stop.

Avoid the metro until 2024 when an accessibility makeover of 13 metro stations (including Vieux Port and Rond-Point du Prado) costing €200 million, should be complete. For general advice and resources see Lonely Planet’s accessible travel resource page.

Walking in Marseille plunges you into thrilling action

No other French city is so electrifying with its sensorial mashup of sounds, sights, smells (of fish, flowers, ship fuel at the port, the sea, spices at the market, bouillabaisse slowly cooking on the stove …) – and walking plunges you into the heart of this thrilling action. It can be messy and manic and frequently maddening, but walking to the end of every street inevitably uncovers unexpected sights and spontaneous experiences you could never plan or consciously engineer. My favorite guided walking tour? The tourist office’s biodiversity-themed “Balade Buissonnière” around “wild Marseille”: think clandestine green spaces, secret walled gardens, hills, dunes and other flora-rich, natural heritage spots.

6 LGBTQ+ pleasant locations to journey, some you could or might not know!

The best travel cities to visit in the UK 2022