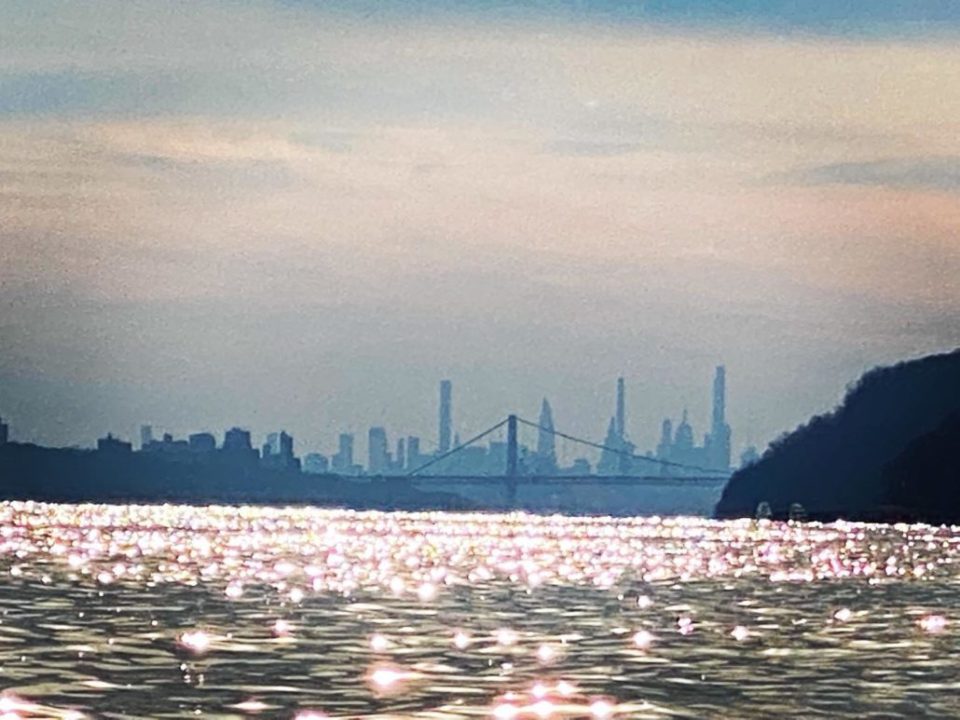 Neal Moore ended his 22-month solo canoe journey across America yesterday at the head of a small flotilla of friends he’d made along the way. The well wishers came from all over the country to share this moment with Moore, who led the way to the Statue of Liberty in the red Old Town canoe he’d spent nearly two years paddling and portaging from the Pacific to New York City.

Friends cam from Astoria, Oregon, where he started paddling 675 days before, from Clarksdale and Columbus, Mississippi and Louisville, Kentucky. A media boat followed the paddlers, carrying more well-wishers, as well as reporters from the New York Times, the New Yorker and Professional Mariner magazine.

Moore’s first sight of Manhattan, from the Hudson River after 7,500 miles of paddling. Courtesy Neal Moore

Moore’s friend Norman Miller, a ringleader in the close-knit community of long-haul paddlers, reckons Moore is the only person to canoe solo across the United States from west to east in a single go.

“It’s a first, but in my book that doesn’t matter so much as the people along the way and their stories,” Moore said. “It was really the perfect blend between town and country.”

The circuitous journey took Moore some 7,500 miles, which he covered continuously, in a manner of speaking. He stopped often, laying over in small towns and cities for days and sometimes weeks, getting to know the places and people before moving on.

The brevity of those relationships made them all the more intense. “It’s like a fling,” he told Adventure Journal in April. “You’ve got this brief romance with the town, with the people, with humanity. And then they’re saying their goodbyes and they literally push you out into the river.” 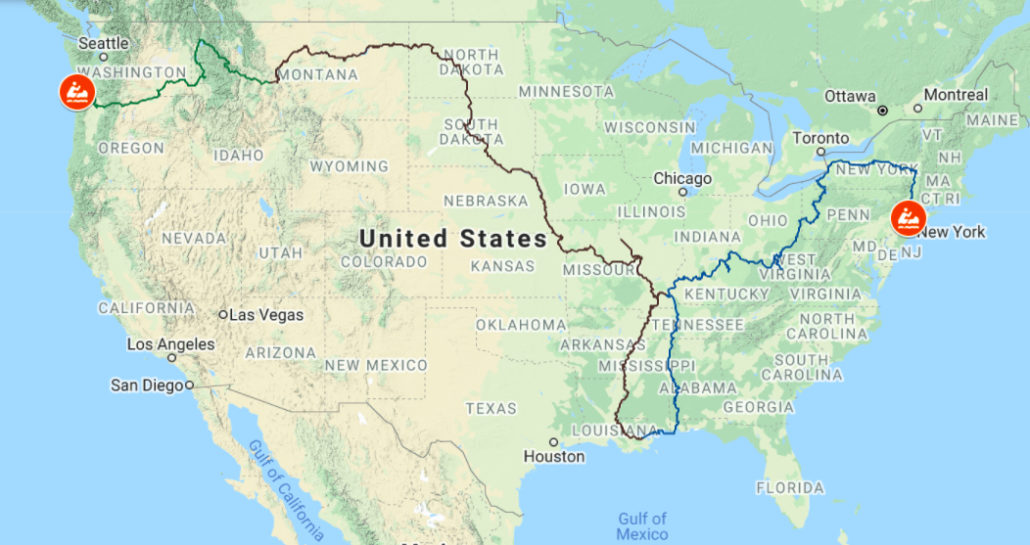 Neal has divided his 7,500-mile journey into three acts, titled To The Great Divide, To the Big Easy, and To Lady Liberty.

Moore, 50, grew up in California and spent most of his adult life abroad. He came back to rediscover America and share the stories of its people in a style of journalism all his own, “slow and low-down from the view of a canoe” as he puts it.

His first attempt came to naught on a Montana cottonwood snag in 2018, after bucking record high water for 1,700 miles. Moore went back to Taiwan, where he worked as an English teacher and freelance journalist, to plan and save, and set off anew in February 2020, paddling straight into the Covid-19 pandemic. He slipped out of Oregon in late March, hours ahead of a shelter-in-place order that would have derailed his 22 Rivers project for a second time.

Moore decided to keep going despite the pandemic. With international borders closed, going “home” (he still gets his mail in Taipei) was no longer an option. So he stuck with the plan, battling upstream on the Columbia, Snake and Clark Fork rivers to the Continental Divide, then 3,249 miles down the Missouri and Mississippi rivers to winter in the Gulf of Mexico. He timed his journey with the seasons, careful to stay ahead of the northern freeze and behind the Gulf Coast hurricane season.

He lost his canoe, got it back, and survived a near-miss by a tornado. One night on the Mississippi a barge nearly ran him down as a flock of 1,000 white pelicans swirled in the moonlight. 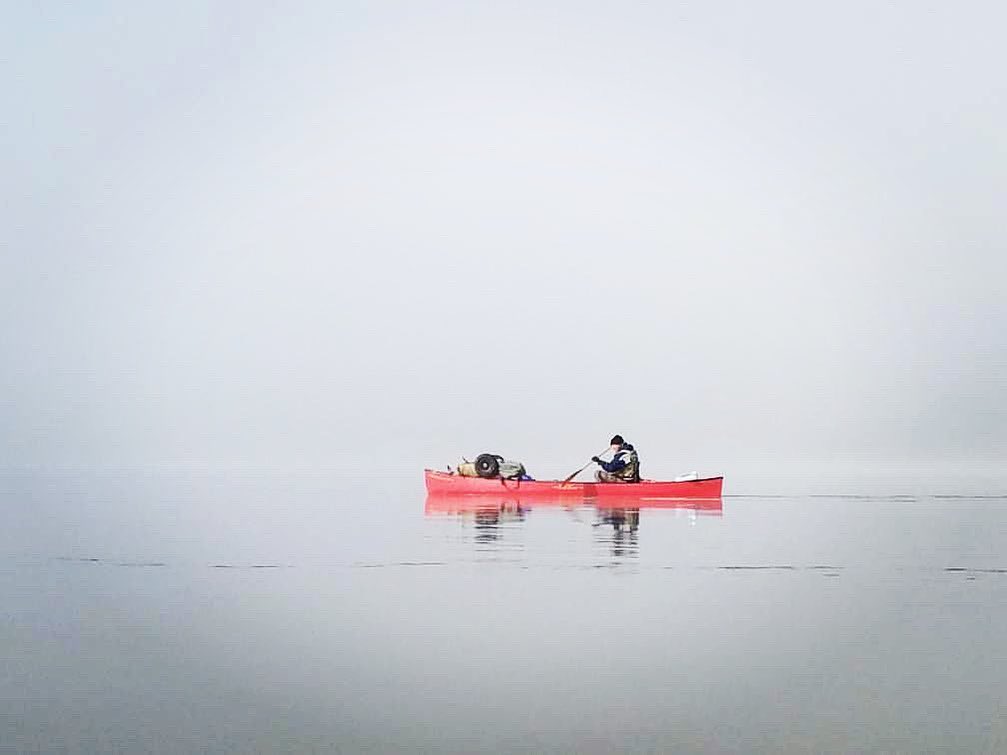 For most of the last year he worked his way upstream, from the Gulf of Mexico up the Tombigbee and Ohio rivers to Pittsburgh, then on to Buffalo. When Moore learned the Erie Canal would close for the winter in mid-October, he chose not to rush. Instead he paddled the first half of the 363-mile canal and walked the rest, pushing his canoe and gear on portage wheels as winter bore down. The Hudson, a downstream run with Lady Liberty in his metaphorical sights, felt almost like a victory lap, until the last few miles.

While Tuesday’s ceremonial visit to the Statue of Liberty went off without a hitch, Moore’s solo arrival in Manhattan three days earlier nearly ended in disaster. He passed under the George Washington Bridge on an ebbing tide, into a south wind so strong it spun his canoe around. For only the second time in 7,500 miles of paddling, Moore couldn’t turn the craft back through the wind. So he paddled backwards, all the way to midtown.

“I was taking on water and I called the Coast Guard for the first time in the whole journey, just to let them know my position and that there’s a good chance I’m going to go in the water,” Moore said. “They sent a New York Police Department boat that just went roaring right past me and never came back. It just threw one hell of a wake.

“I back-paddled for four miles into Manhattan, which is appropriate, because the whole journey has been the wrong way.” 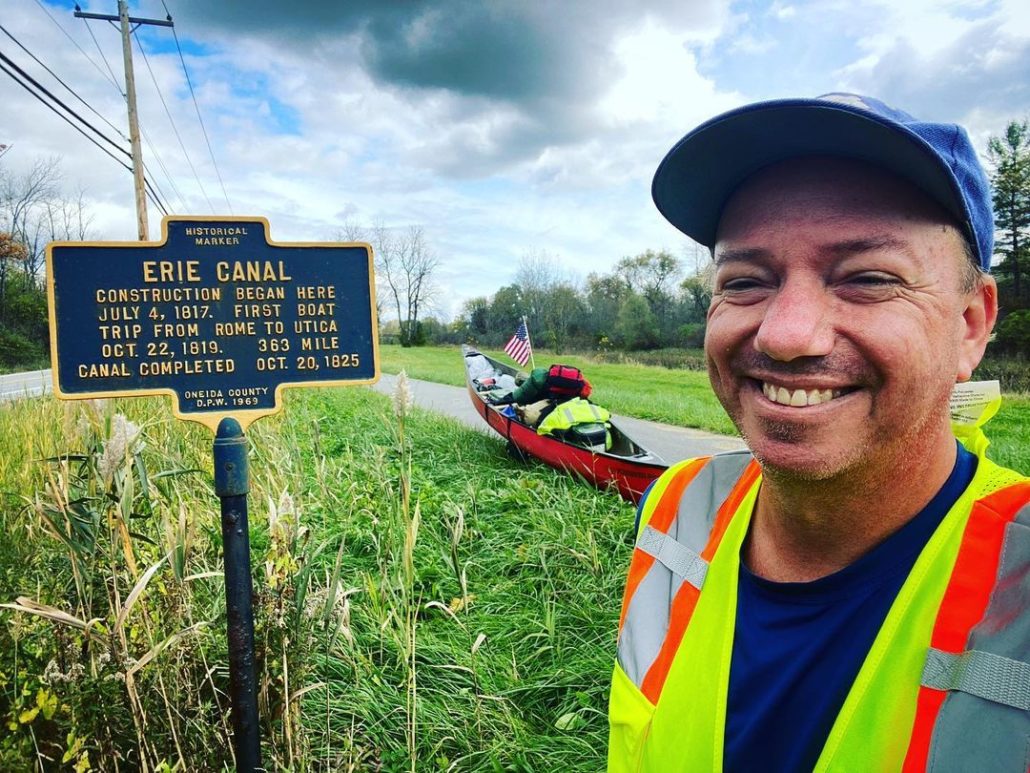 Cause for a Smile: Moore at the start of the Erie Canal after 1,500 miles of uspstream paddling. Courtesy Neal Moore

On Tuesday afternoon, Moore and a few friends paddled seven miles from the Manhattan Kayak Co.’s 84th Street Boathouse to Liberty Island, with media and more friends following in the media boat.

“We circled the island together and then because I was the only schmuck in a canoe and they were all in ocean-going kayaks, I said cheers and thank you to everybody and then I hopped on the media boat,” Moore said.

The trip was always meant to end at Lady Liberty’s feet. “The Statue of Liberty was just the endgame, but it could not have been more symbolic of the journey,” he said. “I’ve been exploring from the very start not just the waterways, but us as a nation, us as a people. Sharing the journey with my friends, and them sharing their journeys and their spirits with me, speaks to what this expedition has been about from the beginning.”

Six tricks to eating around the world

World’s Coolest Boat Race Is On, And First One To Alaska Wins

For the Planet’s Sake and Our Own, We Should Let Rivers Run Free