With the news that crews have begun plowing the biggest, deepest, snow drifts—some stacked as high as 80 feet—on Glacier National Park’s Going-to-the-Sun Road, we thought back to this trip report about riding bikes along the road, after the plows have cleared it, but before cars have been allowed access. Quiet, exquisitely beautiful, pure magic. Also, a butt-kicking climb. As the author of this piece explains, however, it’s very much worth it. – Ed.

We’re straddling our bikes in a canyon of snow. Some of us are on mountain bikes, some on road bikes, with a menagerie of steeds covering every type in between. I’m on my ten-year-old hardtail with rim brakes, high on endorphins from the relentless climb and blissfully oblivious to the fact that the impending descent would be the demise of that particular back rim.

Every spring, an underground movement of cyclists journeys to the sublimely beautiful Going to the Sun Road in Glacier, Montana’s northern-most park. They ride the tails of plows run by an elite force of Glacier National Park employees tasked with clearing snow from the steep, narrow ribbon of pavement that, after deep winters like the one Montana just saw, can rise 80 feet above the asphalt.

We shout a hundred variations of “It’s so beautiful!” through our burning lungs as the Big Bend rounds out to reveal Heaven’s Peak.

Once it’s clear to Logan Pass in early June (at the most optimistic), Going to the Sun opens to the millions of cars that traverse its length over the Continental Divide. Motorists squeeze past each other in an unending line on what can only loosely be called a two-lane road; barely wide enough for two sports cars, let alone motorhomes and F-350s, it’s sub-optimal for biking unless there’s a death wish involved. But for now, while the Pass still hibernates under the weight of snow, the road in all its ferocious beauty belongs to the human-powered pilgrims.

Many are Columbia Falls and Whitefish locals lucky enough to call what’s arguably America’s most gorgeous stretch of landscape their backyard, insanely fit ninjas who climb the 3000-plus feet on dawn patrol, or tow their children up in trailers for an after-work “jaunt.” Others make the pilgrimage from further reaches, like our crew from Missoula.

This Memorial Day, a dozen of us caravanned the three hours north with bikes mostly strapped haphazardly to racks on hatchbacks. We set up camp at Sprague Creek, one of the few campgrounds open in the early season and the closest one to the hallowed road. The folding camp table was quickly laden with whiskey bottles, and we cracked local IPAs with sandbagged alcohol content as we began elaborate dinner preparations—always a protracted event when the sun doesn’t set until 10:00 pm. In a state where it regularly snows in June, summer—when it finally deigns to appear—becomes a phenomenon to be celebrated in full glory.

The everlasting daylight of northern summers also allows for lazy mornings. We slowly rallied after several cups of coffee to begin our 3300-foot, 64-mile roundtrip pedal for this classic Montana adventure, where the challenge and scenery are rivaled only by its rugged history and intrigue. 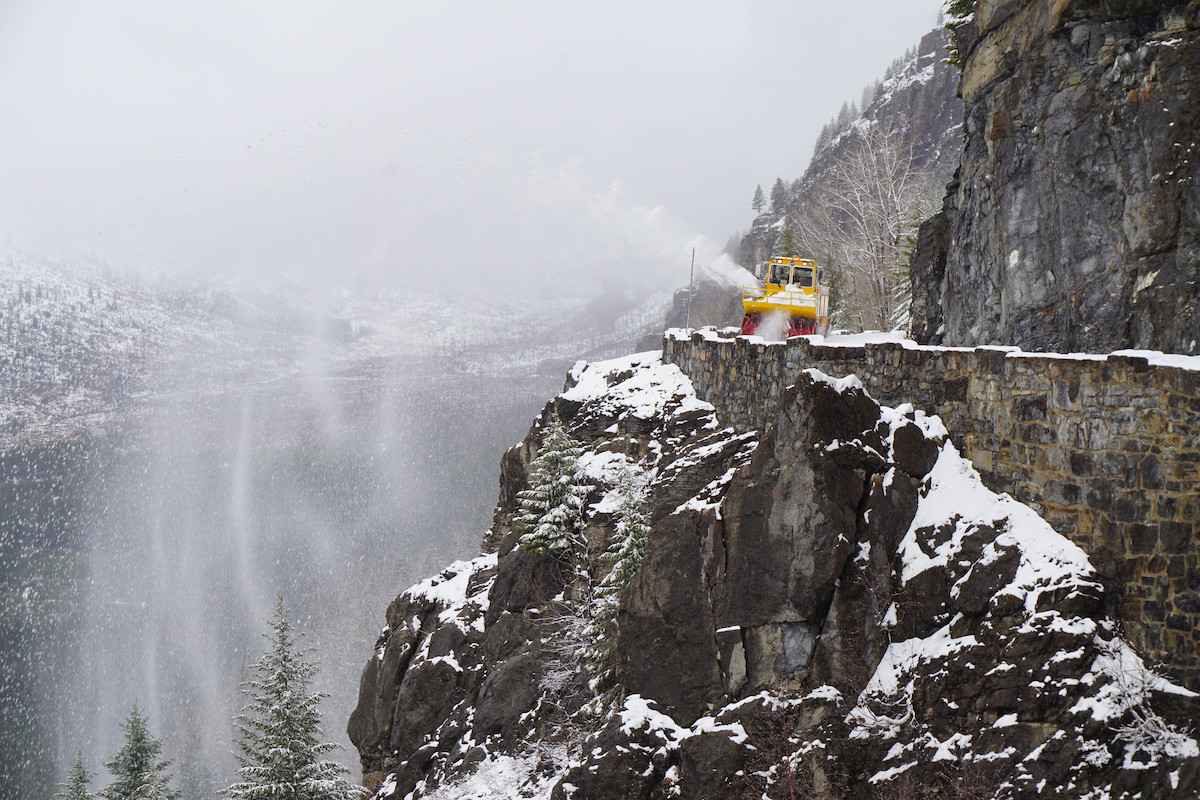 One of the country’s best jobs? Photo: Glacier NPS

Before Glacier was established in 1910 as the country’s tenth national park, only a few wagon roads existed aside from the Great Northern Railroad tracks that transported people to a few chalets tucked into the interior of the great mountains. The first survey to map out the road’s route, in 1924, required workers to hike 3,000 feet up to the worksite on a daily basis, walk nauseatingly thin ledges, and hang on ropes over the sheer walls and cliffs that define Glacier’s extreme landscape—conditions that spurred a staggering 300 percent turnover in the workforce in the first few months alone. As we start the unforgiving climb out of the cedar forest from Lake MacDonald, I can sympathize with that attrition rate.

To distract from burning legs and lower backs aching from the consistent climb, we drool at the views that our slow passage allows plenty of time to ogle. We pedal past the lookout to Bird Woman Falls hurtling down Mt. Oberlin in the distance, and stop to douse ourselves at the Weeping Wall that’s gushing full-bore, running in and out of the frigid waterfalls like kids in a glaciated sprinkler. Our bike-by of the Garden Wall with its spectacular hanging gardens has us exclaiming over countless flowers we can’t name. We shout a hundred variations of “It’s so beautiful!” through our burning lungs as the Big Bend rounds out to reveal Heaven’s Peak. 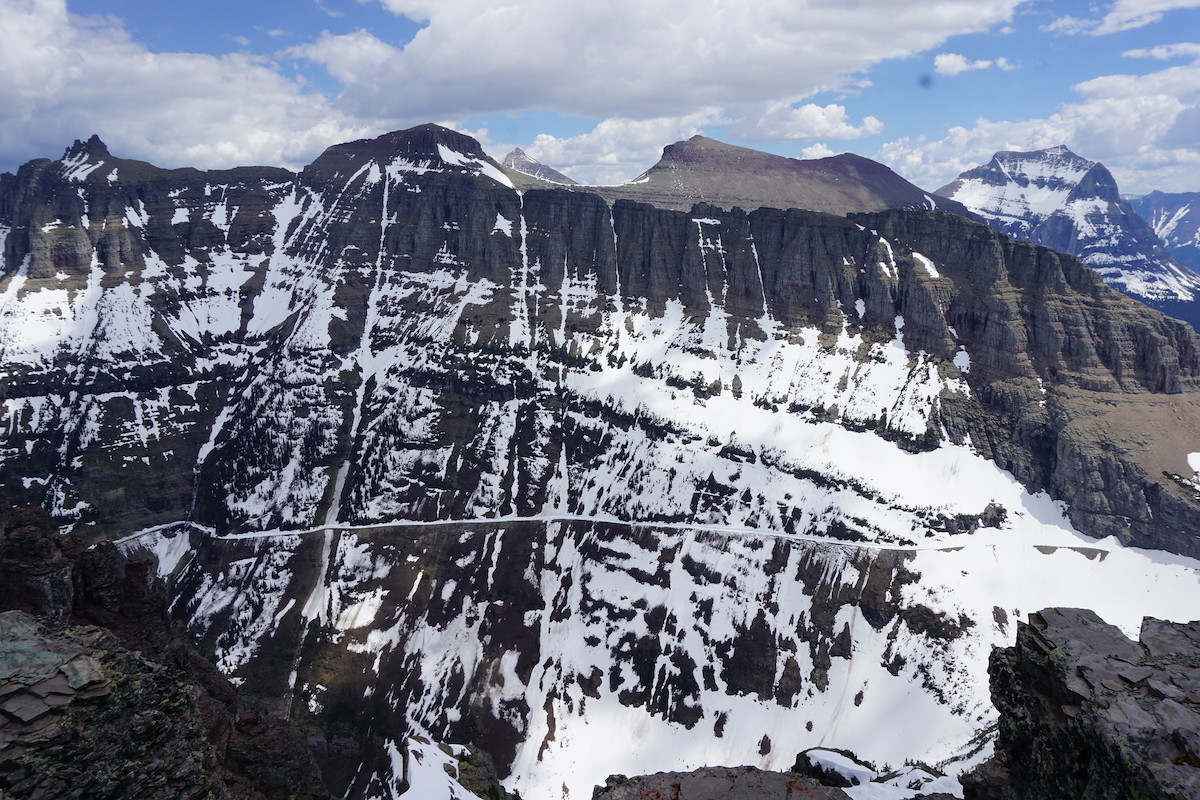 Seems impossible there’d be a road there, but, well, there is. Photo: Glacier NPS

Finally, we’re stopped by the wall of snow and a plow at rest just a half mile before the apex of Logan Pass. A trio of mountain goats scatters at our approach, fading into invisibility on the overhanging snowfield above, which we eye warily as we catch our breath and prepare to descend. Just weeks ago, a late-afternoon avalanche in the Triple Arches area left 13 cyclists marooned on the Logan Pass side of the road for eight hours before plows could break through to rescue them. It’s only lucky they weren’t the latest sacrifice to Going to the Sun.

The building of the road, which took 35 years to complete and required backbreaking work in excavating features by hand and small explosives to preserve the landscape, claimed the lives of three men. The road has claimed many more lives since then, including tourists falling over retaining walls and slipping into creeks that plunge hundreds of feet; and the grisly 2013 incident of a woman pushing her newlywed husband to his death just off The Loop, the road’s lone switchback.

I’m well aware of the road’s savage nature, which is why I ride the rim brakes on my hardtail for most of the descent. I’m glad to be on a mountain bike for this; the pavement is pockmarked by wounds left from the plows, strewn with tiny concentration-breaking pebbles and day-ruiner boulders shed from the steep walls, and its snowmelt-slick curves offer the terrifying opportunity to test flight patterns into space.

Finally turning back into Sprague at the bottom with an ecstatic grin (far behind the road bikers in our crew who boast way more guts), I come to a halt to stretch before heading into our campsite—and jump out of my skin at the close crack of a gunshot. I push off to pedal to the others so we can wonder collectively who the hell is shooting inside a national park.

But my bike won’t move.

Turns out that gunshot was actually my back rim, super-heated from riding the brakes down 3,000 feet, exploding to corkscrew into the spokes. I’m lucky it didn’t corkscrew into my calf.

In the end, that back rim was just one more sacrifice in the annual pilgrimage to Going to the Sun. A worthy one in this case, and I’ll be back next spring in homage to the haunting beauty of that road. But definitely with disc brakes this time.

The beautiful travel places in Chennai you can plan