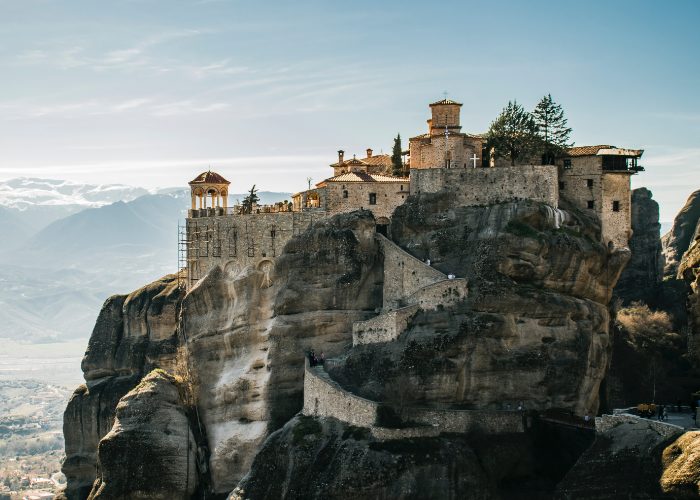 As the cradle of Western Civilization, ancient Greece gave birth to so many things we still enjoy in modern times. To this day, the country draws people in droves to revel in their cultural, historical, culinary and architectural delights. Anise-flavoured aperitifs. High-hanging monasteries. Enduring theatre acoustics. The whole place is a wonder for the senses and it goes a lot further than the delightful tang of feta cheese. Here are just a few of our favourite ways to experience Greece:

Ancient Athenian wonders at the Acropolis: While there’s plenty in Greece to enjoy outside of its historically significant architecture, no trip to Athens is complete without a visit to its famous citadel. Even for the most seasoned travellers, this “high city” built into the limestone impresses with its iconic Classical structures like the Parthenon. Not only can you enjoy a panoramic view of modern Athens, you get to follow in the footsteps of great thinkers and builders as they gave birth to Western civilization.

Hanging monasteries of Meteora: Reach for the heavens as you ascend to several houses of worship set on rocky pinnacles. Constructed before roads or settlements in the area, they were purpose-built on high perches to keep out unwanted visitors and protect solitude. At their peak in the 16th century, there were 24 monasteries in the area and now only six active ones remain. Thankfully, the original precarious rope ladders were ultimately replaced by steps and roadways to the top. You can now bus up and even opt for a sunset tour that ends with a colourful flourish high up on the sandstone rocks of Meteora.

Marvel at the hanging monasteries of Meteora

Bounties of the Mediterranean sea: Deep-fried calamari. Steamed mussels. Grilled octopus. As a country with endless islands and the second longest coastline in Europe, it’s no wonder that fresh fish is a beloved dish. As you wander the seaside, you’ll often find octopus hanging to dry at psarotavernas (outdoor fish cafes) before it’s charcoaled to perfection for that night’s dinner. Also look for marides tiganites as a meze option — it’s a tiny whole fish lightly dusted in flour and fried until crisp.

Anise flavour of Ouzo: This licorice-tasting aperitif is such a staple of Greek drink culture that the small taverns serving it are called ouzeris. Of course, you’ll need something to soak up the high alcohol content so meze (light finger foods) are also on the menu. The black licorice flavour pairs nicely with common Greek foods and is used in dishes like cheese or shrimp saganaki. Typically, ouzo is served neat in a kanoakia (skinny highball glass) but many Greeks add water which turns the potent liquid milky white. Opa! 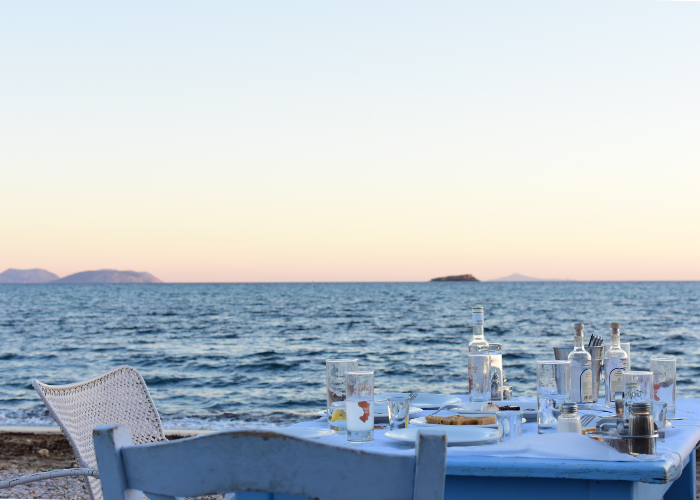 Sip anise-flavoured liquid from a taverna chair by the sea

Dinner cooking (that you helped make) in Crete: One of the best ways to fully immerse yourself in any culture is to sit down at a local family’s supper table. It’d be rude (and probably illegal?) to invite yourself over but you can always take a cooking class. In places like Loutro, you can learn how to make traditional Cretan dishes like dakos (rusks topped with tomato sauce and soft Myzithra cheese), tzatziki (garlic yogurt sauce) and kaltsounia (Cretan cheese pies) and then sit down to eat together. You’ll get to enjoy the Mediterranean aromas, chat about daily life in Greece and walk away with a few new recipes.

Salty ocean air from three surrounding seas: There are lots of lovely scents in Greece: night-blooming Jasmine, the combination of oregano, thyme and basil or fresh caught seafood blackening on the grill. But it’s the calming scent of the sea that draws travellers from all over to take in the ocean views in places like Nafplio, Oia and Irákleion. And you’re spoiled for choice when it comes to which sea to sniff as Greece is bordered by the Aegean to the east, the Mediterranean to the south and the Ionian to the east. 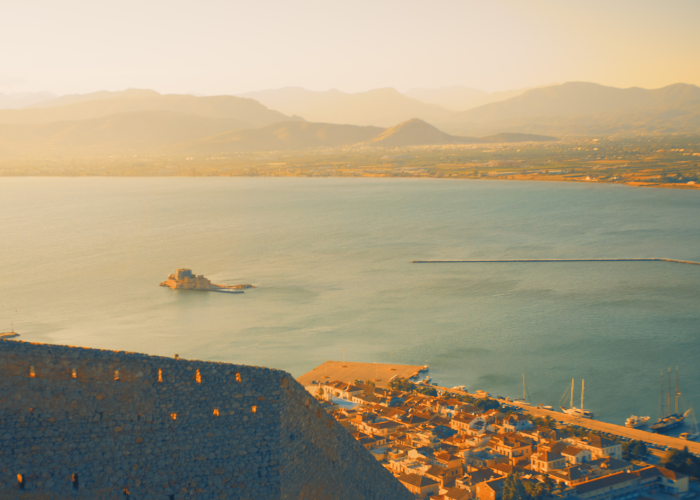 Inhale the salty air on high from Nafplio

Incomparable theatre acoustics at Epidaurus: There’s no shortage of impressive odeons and amphitheaters in ancient Greece but one is famed for carrying the slightest sounds to the very back rows. Set into a natural slope and built in 340 BC by Polykleitos the Younger, it is said that the limestone seats are the auditory MVP of the famed Epidaurus Theatre. As it’s incredibly well-preserved to this day, you can take in a performance or just test out the sound of your own voice. Don’t forget to project!

Waves lapping on your choice of boat: Going back to that surrounded by water thing — getting on a boat of any kind is highly recommended. You can skim the crystal clear waters off of Loutro on a kayak, hop on a ferry to explore remote fishing villages, or set sail from Santorini for a sunset cruise. Not only do you get to be out on the water, but you get to look back on whitewashed cliffside villages, isolated coves and stunning beach scenes. Dwarfed by the Iron Gates of Samariá Gorge: It’s easy to feel small (in a good way!) when you’re sandwiched between two giant rock walls. Known as the “Iron Gates”, this is the narrowest point of Crete’s famed hiking trail where you pass through rocks that are 300m (980ft) high on either side of you. The 16km canyon is the longest gorge in Greece and runs from the White Mountains to the Libyan Sea. Along your trek you’ll likely see Cretan ‘kri-kri’ mountain goats, abandoned villages and no less than 22 freshwater springs. Feels great!

Inspired by Greek Gods in ancient Delphi: Sitting at the base of Mount Parnassos, you can admire the remains of a religious sanctuary dedicated to Apollo. The ancient Greeks thought Delphi was the centre of the universe and the site includes treasuries, a stadium, a gymnasium, a hippodrome and the Temple of Apollo. The latter dates back to the 4th century BC and took a beating from war and earthquakes but its remains continue to offer insight into ancient Greek life. When’s the best time of year for your epic Iceland adventure?

The Single Mother Who Turned An Arctic Robinson Crusoe

Discover special beaches that look like on other planets