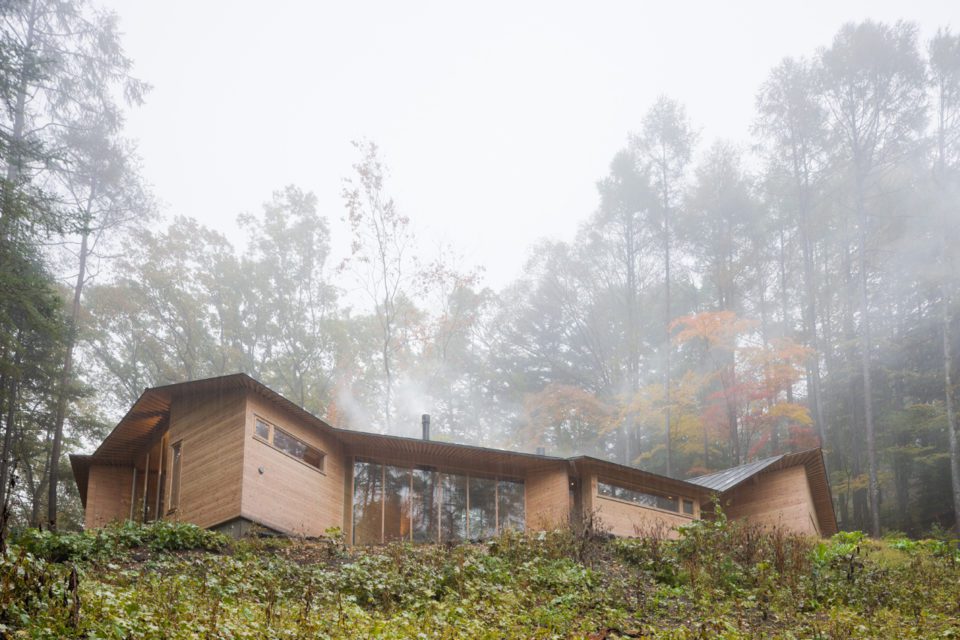 The InBetween House, outside of Nagano, Japan, is a mindbender of exterior/interior, public/private, and city/rural metaphors and functionality. Within the classic reference of nature-infused Japanese architecture, it delivers all of the aforementioned elements and everything in between. No pun intended.

While it looks like a straightforward home from the outside, the InBetween House is actually five separate cabins connected by a complex relationship of roofs and overhangs. Each of the five “cabins” are sized and situated to take advantage of the topography and views. They serve as the private spaces within the home.

Where things get meta is in the connecting spaces between and around the cabins. While fully enclosed as interior space, the connecting spaces give the feel of openness to the outside. They are linked into a single meandering room – with wide hallways leading to big open areas that serve as the public spaces, like the living room.

Koji Tsutsui Architect and Associates, the designers, intended the home to metaphorically represent the homeowners’ split life between the city and the rural surrounds. The connecting spaces become the alleys and roads to large expanses of shared space, while the “cabins” provide privacy like a city apartment or a second home in the woods. Weekend Cabin isn’t necessarily about the weekend, or cabins. It’s about the longing for a sense of place, for shelter set in a landscape…for something that speaks to refuge and distance from the everyday. Nostalgic and wistful, it’s about how people create structure in ways to consider the earth and sky and their place in them. It’s not concerned with ownership or real estate, but what people build to fulfill their dreams of escape. The very time-shortened notion of “weekend” reminds that it’s a temporary respite.

Parenthood and the New Definition of Journey