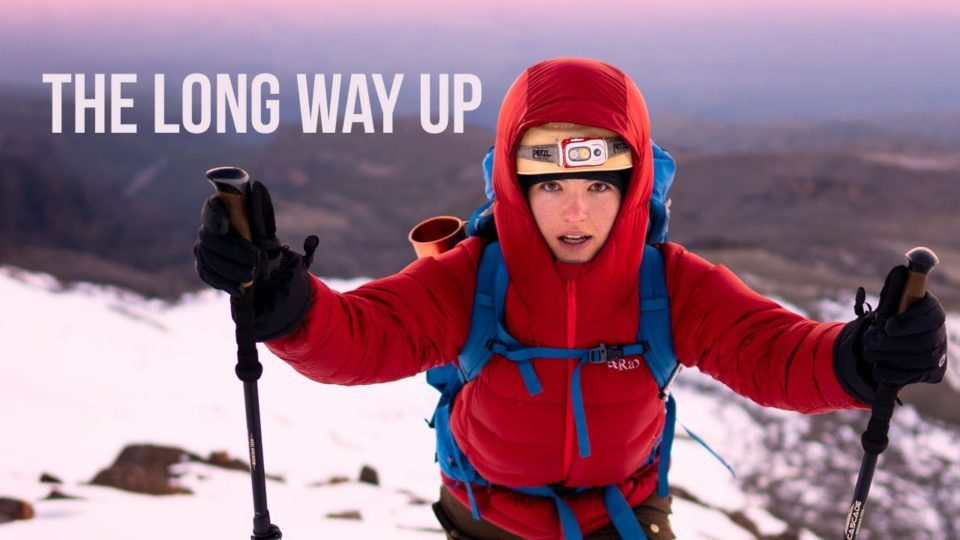 On Africa’s east coast, the United Republic of Tanzania is a country of immeasurable beauty and cultural diversity, and it’s also the setting for some of Africa’s most spectacular hikes.

People are drawn from across the globe to the majesty of the expansive Serengeti plains, where romping springbok, zebras and wildebeest keep a keen watch for prides of lions, whose sudden strikes assure a meal for growing cubs. But this is just the start of the Tanzania experience. 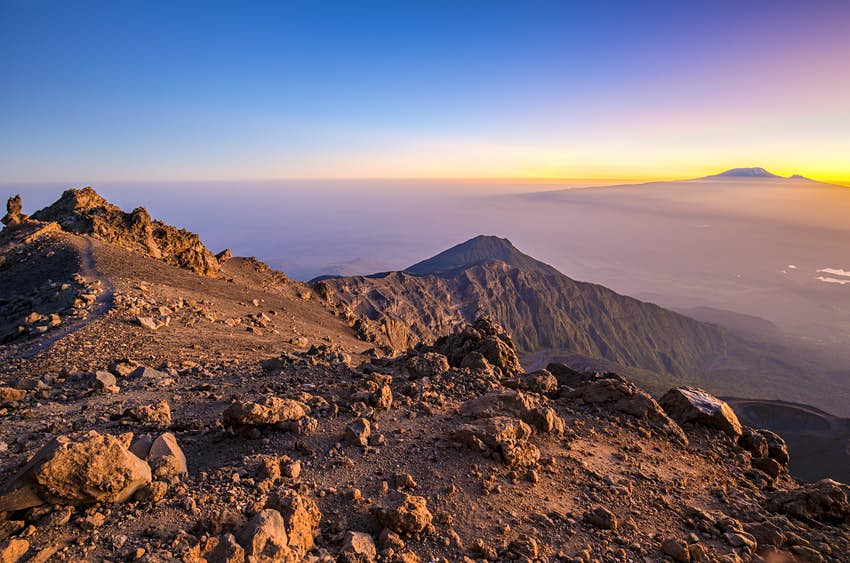 Tanzania is home to dense, tall forests that hide the sun and tracts of tea plantations where tea workers deftly pluck the green leaves off tea bushes. Mountain ranges dot the countryside, rising in places to snowy summits that melt into the clouds. This is a magical landscape that’s best explored on foot.

Hiking trails meander through several national parks, past lively villages and once-powerful kingdoms to the slopes of Tanzania’s highest mountains, offering paradisiacal views over verdant valleys sloping down to the plains. If you have walking shoes, we’ll show you how to step to Africa’s rhythms and discover Tanzania’s best hikes.

From 37km (23 miles) round-trip, 5–9 days, generally moderate but challenging towards the end

If you’re a mountain enthusiast with passion and determination, and ambitions to climb the seven summits, then hiking Kilimanjaro will no doubt be on your bucket list. Described as the ‘Roof of Africa,’ Kilimanjaro is the continent’s highest mountain and the worlds highest free-standing peak, topping out at 5895m (19,341ft).

Hikers gather at the gates to Kilimanjaro National Park (which gate will depend on your chosen route), and the trek usually kicks off with jovial songs and dances after the official signing in. The porters and guides come from local communities and they know the hike requires both physical strength and mental endurance, so they call upon the mountain’s spiritual keepers for strength before setting off.

There are six official routes and a few unofficial trails leading to the summit – known as Uhuru Peak, meaning ‘freedom’ in Kiswhaili – with the Marangu and Rongai routes being the easiest. The Lemosho route which takes up to nine days is probably the most scenic trail but it’s also one of the most challenging. All the routes meander through five climatic zones, from lush evergreen forests, moorlands, and dense shrublands to eery arid land populated only by dull-colored rocks.

As you climb higher, the scattered rocks give way to alpine deserts, as you make your way to the snow-capped zenith. With some luck, you may come across curious monkeys along your route, and a few mountaineers have spotted cape buffalo, eland, leopard and elephants on the first day before the dizzying trek uphill.

The 7-day Machame Route is the most popular trail, so if you dislike crowds perhaps avoid this one. If you’re paying upwards of US$1000 for the trek (and some agencies charge up to US$6000) you may as well enjoy the journey. Don’t rush the ascent – pole pole (slowly slowly) as the Chagga people say. A longer trek raises the chances of success as you’ll have more opportunity to acclimatize to the altitude – a key part of hiking Kili is avoiding altitude sickness, the number one reason that people fail to make it to Uhuru Peak.

Tips for climbing Kilimanjaro:  Mount Kilimanjaro is a non-technical ascent. It requires no climbing equipment or mountaineering skills, but you have to be in reasonably good shape, though even octogenarians have been known to make it to the summit.

Choose a good trekking company – KiliWarrior Expeditions is one recommended outfit. This might be a tad more expensive than going with a budget operator, but the expertise of your porters and guides is worth it. Pay extra for a portable private toilet if you can.

Pack warm clothes, good boots, a torch and walking poles, along with plentiful snacks to get you up the trail. Eat and drink as much as you can while trekking and avoid alcohol or too much tea or coffee. Under park rules, hikers must be at least 10 years old (although a 6-year-old has previously reached the summit). Tip your porters and guides well – at least 10% of the expedition price is appropriate.

About 70km from Kilimanjaro National Park, inside Arusha National Park, is lesser-known Mount Meru. If you’re going to climb Kilimanjaro, then summiting Meru – the second-highest mountain in Tanzania – is by far the best way to acclimatize. It’s a three to four-day hike to reach the summit, known locally as Socialist Peak, which stands at 4555m (14,980ft).

At the base of the mountain, buffaloes, antelopes, zebras and giraffes graze the forests and meadows under open blue skies. Elephants may keep their distance, but capturing them in the distant grasslands against the golden hues of a setting sun is still a photographer’s dream. The cries and shrieks of the black and white colobus monkeys play off against the shrill song of birds as you cross the Ngare Nanyuki river on your way to the summit.

The Momella route is the only trail leading to Socialist Peak. Hikers approach the mountain from the eastern face, moving over the northern ridge and covering a distance of 45km (27 miles). As for Kili, Meru is a non-technical ascent, but hikers must overnight in huts along the way. While the Miriakamba and Saddle huts will provide for your basic needs, it’s the hearty meals prepared by your guides that will give you the endurance to reach the top. On the last day of climbing, you’ll awaken just after midnight to catch the sunrise and a heavenly display at the mountain’s peak.

Tips for climbing Mt Meru: Choose a good trekking company – Altezza Travel is a well-known and trusted operator of climbs and hikes across Tanzania. Budget US$900–2000 for the trek. En route, aim to drink around four liters of water a day, and hike slowly; the recommended pace is two times slower than your ordinary walking pace. Start training for your hike at least two months before your intended start date.

About 240km (149 miles) from Arusha town in the Great Rift Valley, Ol Doinyo Lengai is known as the Mountain of God by the Maasai people who live in this region. It’s an active volcano, and the unleashing of its fiery lava has led people to attribute a celestial origin to this dramatic peak. Local people walk to its summit to ask the gods for what they need, be it rain or children or a suitable spouse.

Geologists often describe Ol Doinyo Lengai as the strangest volcano in the world because of its “cold” black lava, which has a low viscosity and a low temperature (for lava) of 500°C to 700°C. Hikers know the massif as one of the most challenging summits to climb in Tanzania. It’s considerably harder than hiking Kilimanjaro. The trek climbs over volcanic ash and gravelly earth on steep inclines, and typically starts at midnight, requiring hikers to move slowly, sometimes going on all fours to secure a hold on the jagged rocks.

If you dare look up from the seemingly treacherous, narrow paths, the trek offers views of magnificent meteor showers and shooting stars. Then when the sun rises as you stand on the mountain’s peak, the silhouettes of Kilimanjaro and Meru and the Serengeti plains come into view. Looking down from above the clouds at the earth’s stillness and beauty, you might feel a bit like a god yourself.

Tips for climbing Ol Doinyo Lengai: Trekking to the top of Ol Doinyo Lengai is often combined with a safari in the Ngorongoro Conservation Area so speak to your tour operator about your intended itinerary. Most people spend the day swimming at the nearby Ngare Sero Waterfall or canoeing on Lake Natron to watch the breeding flamingoes, before setting out for the summit at nightfall. Fees paid to the tour operator include park fees, conservation fees and rescue fees.

In northeastern Tanzania, the Usambaras are part of the ancient Eastern Arc mountain range, which stretches from Kenya to the highlands of Tanzania. This is easily the country’s most abundant landscape with lush forests, astonishing cliff faces, verdant valleys, rare wildlife and local communities with a rich and varied history.

Close to the coast, the Eastern Usambaras receive higher rainfall, but are less populated – the main attraction here is the Amani Nature Reserve, where you’ll find day-hiking trails, a botanical garden, butterfly farms and tea plantations.

You can reach the Western Usambaras from Lushoto town. From here, you can hike to the Irente viewpoint and catch a glimpse of Mazinde village, trekking onwards through the Irente Farm on its various trails. Lushoto is also the start point for hikes to the royal village of Kwembago and the Magamba rainforest.

If you are looking for a more spiritually fulfilling journey, the multi-day hike from Lushoto to the village of Mtae should do the trick. Tour operators can organize experienced guides and porters, but it’s possible to do the trek on your own if you are well-equipped, with a map and GPS device.

The dusty trail passes through villages and rich farmland and ascends to a height of 3952m (12,966ft). The peaceful quiet is occasionally broken by birdsong, the sounds of farm laborers and the laughter of children from nearby villages, who’ll eagerly follow along for a while as you walk.

The mountains provide a home for over 3000 plant species, including 600 tree species, as well as a plethora of bird species. After an exhausting few days, the views of the surrounding mountains spilling into deep valleys dotted with lush vegetation are uplifting and healing.

Tips for hiking in the Usambaras: You’ll need four to six days to hike from Lushoto to Mtae, but the walk can be shortened to 60km (37 miles) if you leave out Magamba Peak and the Kidhege Falls. If you’re traveling solo and not using a tour operator, you can catch a bus from Arusha town or Moshi town to Lushoto.

It’s a good idea to carry a decent amount of food, though there are stalls and stores where you can get fresh supplies along the route. Bring trekking poles, water purification tablets or a water filter, a rain jacket, waterproof boots, a head-torch, a power bank and some Tanzanian shillings for supplies. There are various places along the route offering accommodation so do some research before you set off.

A quick guide to other lesser-known trails in Tanzania

There are plenty of less famous treks and trails in Tanzania. Here are some of the best.

Udzungwa is not a conventional safari park, but a popular spot for botanists and twitchers as it’s only accessible on foot. Visitors have a choice network of hiking trails, from the one-hour Sonjo trek to the six-day Lumemo trail. Uzungwa has the second-largest biodiversity of any national park in Africa, with some 400 bird species and 2500 plant species.

The indigenous people call this park Bustani Ya Mungu – which translates to ‘Garden of God’ – because of its forests and diverse vegetation. During the rainy season (November–April), the park is a perfect picture of colorful wildflowers and migrating birds. There are several trails to choose from when exploring the park.

Along with nearby Gombe National Park, Mahale is home to Tanzania’s last remaining wild chimpanzees, and visitors can spot large groups of these primates during the dry season (May–October). You can also explore the beachfront along Lake Tanganyika and hike up to the park’s highest point, 2459m (8069ft) Nkungwe, which is held sacred by the Tongwe people.

What Places to Visit in Mumbai ?