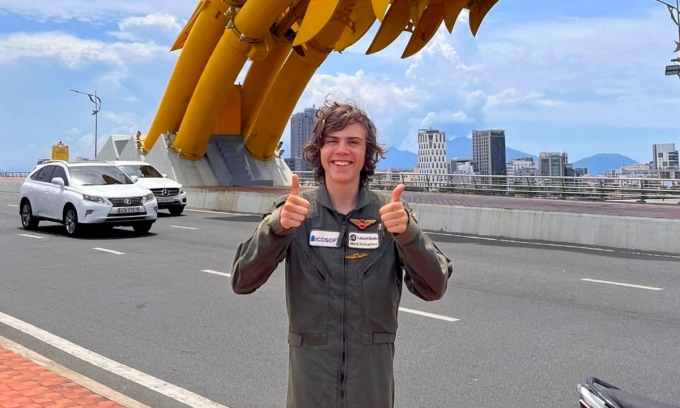 The 16-year-old British-Belgian is trying to become the youngest person to fly solo across the globe, the British embassy in Hanoi said on its Facebook page.

A photo released by the embassy shows him standing on the Dragon Bridge, a tourism symbol of Da Nang, with a smile and two thumbs up.

On his official website, his team said he enjoyed favorable weather and “beautiful scenery” on the journey from Thailand to Vietnam.

He also enjoyed some local foods in Da Nang.

On March 23 he took off from Bulgaria to begin his journey around the world in an ultralight plane at speeds of 299 kilometers per hour.

He has so far flown to Africa, Europe and Asia, and made brief stops in India’s Kolkata and Thailand’s Chiangmai. He left Da Nang for the Philippines on Wednesday.

He will fly to North America next and return to Europe to finish his journey.

The teenager was born into a family of aviators. His father is a professional ferry pilot while his mother and sister are private pilots.

According to Guinness World Records, the current record is held by British teenager Travis Ludlow who completed a solo flight at the age of 18 last year.

No Entry fee for visiting the Taj Mahal from August 05 to 15th.