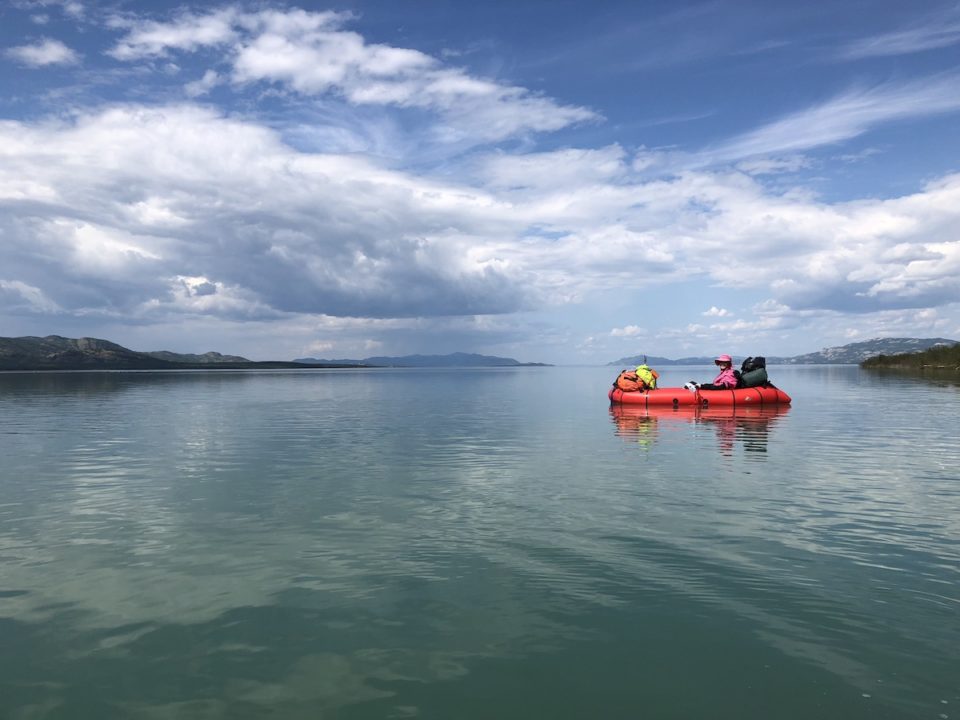 In its calmer moments, Bennett Lake, located in the southwest corner of Canada’s Yukon Territory, is a placid pool of aquamarine. When one of the area’s notorious storms blows in, however, its waters roil with a certain violence. For Leigh Swansborough and Clarissa Black, who were caught in a sudden maelstrom this summer while paddling the lake, this meant trying to prevent their packrafts from capsizing in the monstrous seven-foot swells and 40mph winds. “Every stroke that you take, it feels like it’s pushing you five feet backwards into this sort of grey swirl,” says Black. “I thought, okay, this is how people die.”

Black, an animal trainer and founder of Pets for Vets, a nonprofit that pairs veterans with shelter animals, and Swansborough, a mental health clinician who hopes to launch an adventure therapy nonprofit, were just over two weeks into what would become a nearly 1,200-mile, four-and-a-half-month adventure across the Yukon. Their mission, dubbed Finding Tuktoyaktuk, for the journey’s endpoint at the Arctic Ocean, began on June 1, 2018, in Skagway, Alaska, at the start of the 33-mile Chilkoot Trail, a crucial trade route for the indigenous Tlingit people and a major artery for the Klondike Gold Rush.

“Every stroke that you take, it feels like it’s pushing you five feet backwards into this sort of grey swirl,” says Black. “I thought, okay, this is how people die.”

The duo envisioned following the Klondikers’ original route after completing the trail, which meant paddling roughly 560 miles along connected lakes and the Yukon River to reach the former boomtown of Dawson City. Then they would walk the entire 571 miles from Dawson City to the Arctic Ocean and the tiny town of Tuktoyaktu. Though there’s a newly opened road connecting Tuktoyaktu with Canada, they wanted to be the first to walk the ancient frozen path to the Arctic shores.

“Women have bought into this narrative that it’s not safe to be in the wilderness,” says Swansborough. “Statistically, I know it’s safer for a woman to be outside than in her own home.” The duo hoped that their journey might help bolster the woefully underrepresented canon of female-fronted adventure. “You internalize what you’re socialized to, so if you don’t see people that look like you doing something, you don’t really think and internalize, ‘This is something I can do,’” says Black. “Our real goal was to show women that you can go out into the wild, in nature, if that’s what your dream is.”

While Swansborough and Black had accomplished shorter trips in the past—hiking the John Muir Trail, paddling the Colorado River—they had never contemplated anything of this magnitude. One major hurdle was organizing resupplies across the remote Yukon Territory—especially important as Swansborough is allergic to soy. Before the trip, she prepared $1,200 worth of food drops, only to realize that she couldn’t send them from her home in Los Angeles to Canadian post offices via general delivery due to restrictions on international mail. Instead, she navigated Canada’s extensive visitor center services to find willing strangers who would kindly accept boxes on her behalf. “It was a logistical nightmare,” she laughs. 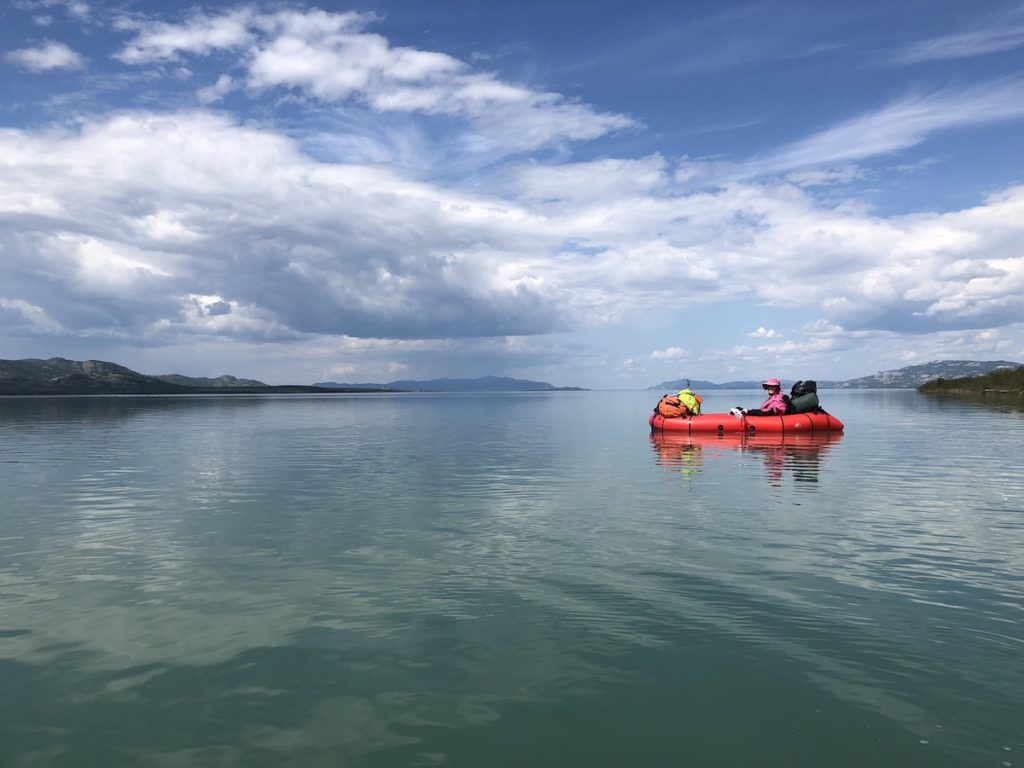 The challenges continued throughout the trip. Although they began in early summer, the Chilkoot Trail was still under winter conditions, which required extra vigilance from Swansborough, who lives with rheumatoid arthritis and Raynaud’s disease, a circulatory issue whose treatment is typically to avoid exposure to cold. Adding to this, she suffered a bad ankle sprain and had to be helped over the segment’s high point, Chilkoot Pass, by Black—who was herself recovering from injuries sustained in a car accident the week prior.

Things were looking peachy when they finished the Chilkoot and started paddling across Bennett Lake, knocking out half of its 26-mile length in one day. Then the storm hit. The upside is that when they finally made the crossing, the weary paddlers were able to decamp and decompress for several days when locals opened their homes, generously offering beds, showers, and hot meals. 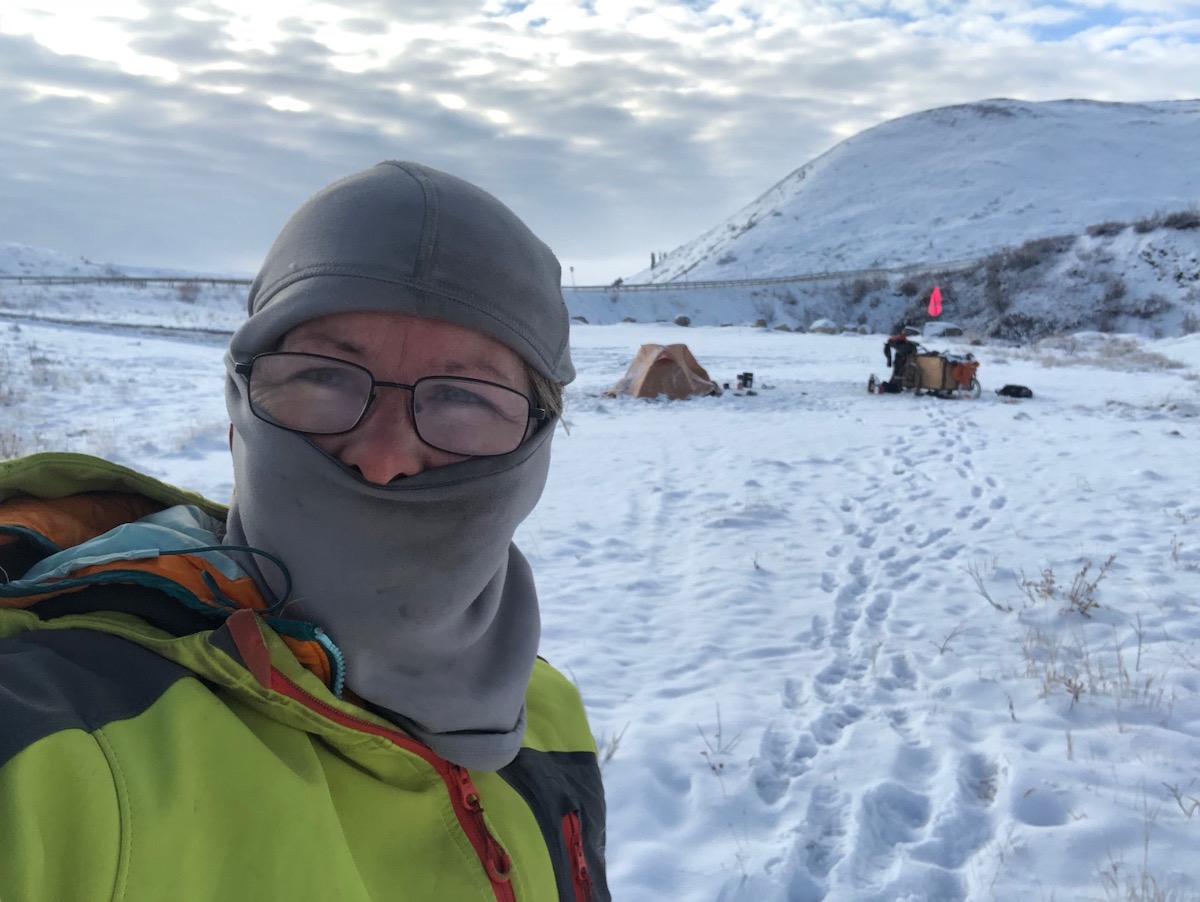 Camp on the way to the Arctic. Photo: Swansborough

When the weather (and their nerves) calmed, the pair set back out on the water, eventually reaching their biggest resupply stop, Whitehorse. Then the unthinkable happened. While they slept one evening in a campground in town, someone slipped off with several bags of gear that were stowed in their tent vestibule. While some items were recovered, many others—crucial gear, nearly all of Black’s clothing, a GoPro camera—were gone. Black and Swansborough thought the trip was over. Luckily, the hospitality they encountered after the storm on Bennett Lake proved to be the rule, not the exception. After the duo shared their story during a previously scheduled CBC radio interview, the people of Whitehorse stepped up to help the women continue their trip.

The third leg of the expedition, the long walk up the Demspter Highway, was not without its own trials. For one, the custom-built cart they’d ordered to ferry their hundred-pound load (there are only three outposts along the highway for resupply) never arrived in Dawson City. The duo compromised with a Burley trailer offered up by a generous local, but were thrilled—and humbled—when an airline mechanic spotted them trudging along, offered his contact information should they need help, and then surprised them the next day with a brand new cart. 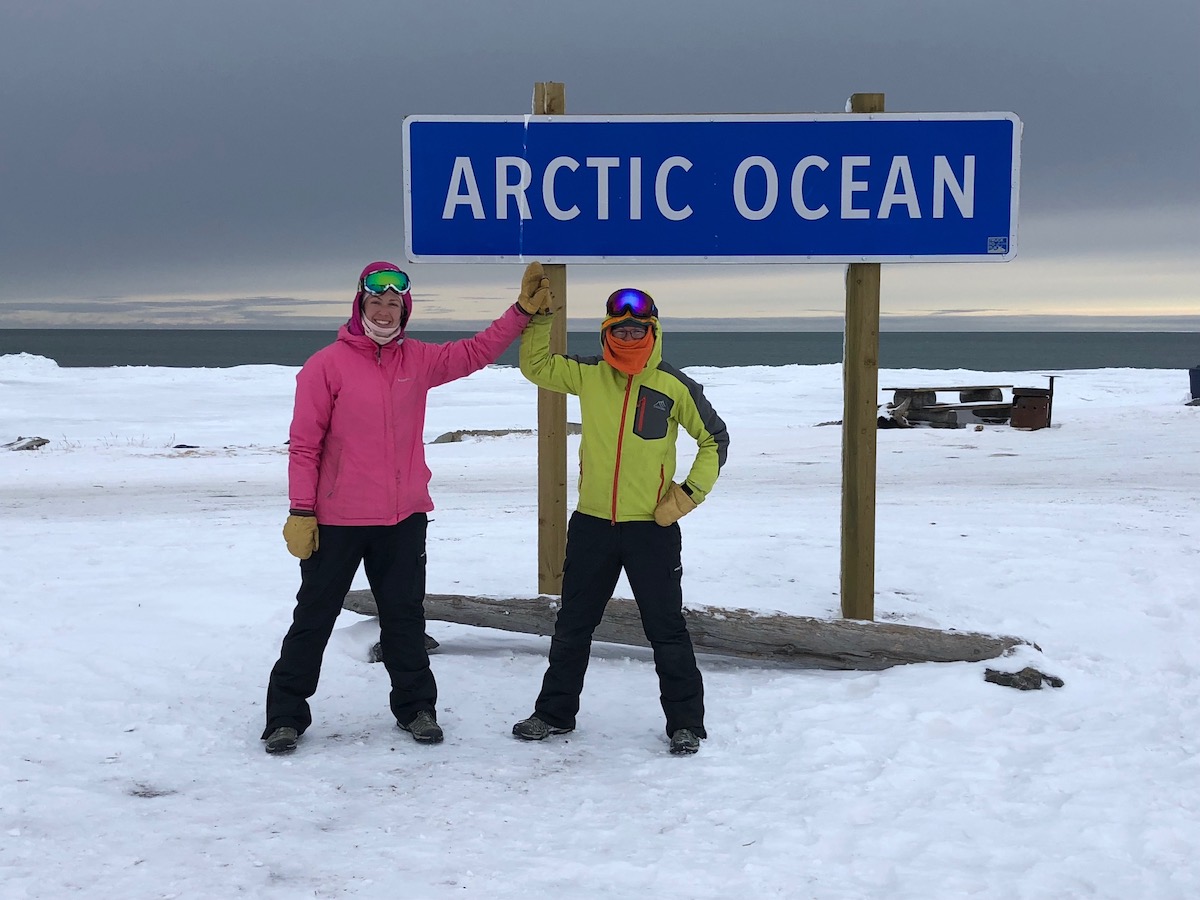 After 1200 miles of trudging through snow and paddling through near-frozen rivers, the Arctic Ocean. Photo: Swansborough

The duo continued to hit snags on their journey—depleted food supplies, a three-season tent inadequate for the fury of winter arriving at the tail end of a trip that was originally supposed to have taken three months—but time and time again, the people of the Yukon would appear, with burgers and sodas and tarps and sleeping bags, to nudge them northward. There seemed to exist a mutual admiration, and a shared sense of inspiration. “That incredible human spirit, the connection, the caring, the kindness of the north, of the Yukon—it was unbelievable,” says Black. Swansborough is equally grateful. “Even if you’re an outsider, you’re still treated as family,” she says. “It restored my faith in humanity.”

The windchill hovered around zero when the duo finally reached Tuktoyaktuk and the Arctic Ocean. Black jumped in a fishing hole carved into the ice, a brief, bracing dose of reality in an overwhelmingly surreal moment. Despite every challenge they faced, the duo persevered—in no small thanks to all of the people they met along the way, and of course, to their own tenacity.

“I think obstacles should be reminders of how powerful and truly capable you really are,” says Black. “It’s more mental than anything else. You don’t have to be the best athlete. If you want to do it, you can succeed. You can figure out a way forward.”

Living With Grizzlies As Neighbors

World’s Coolest Boat Race Is On, And First One To Alaska Wins

The Found Gift of Night Powder