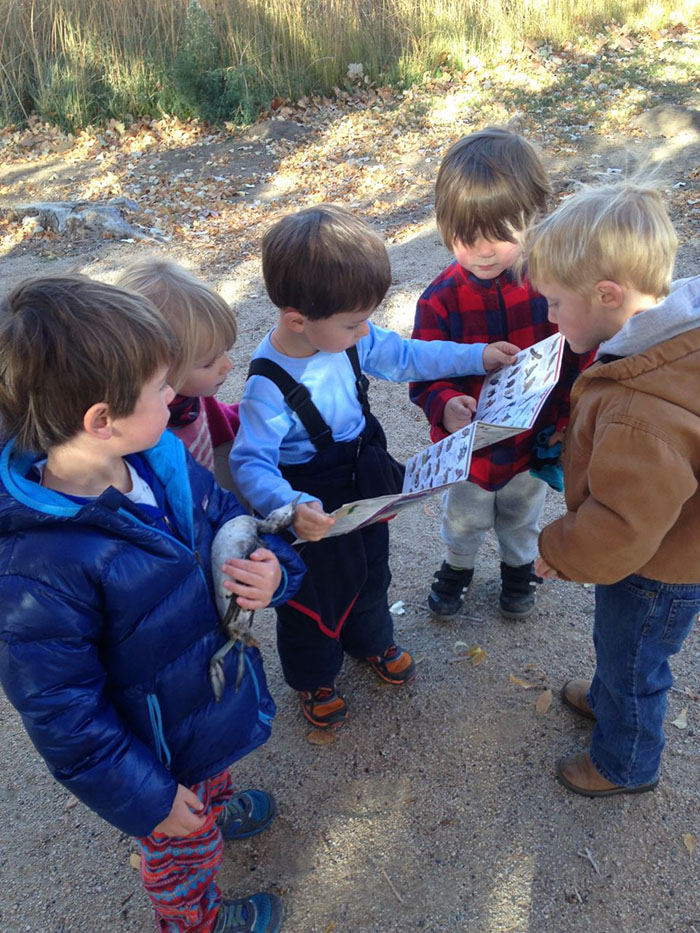 Recently I spoke with a fellow parent who has his toddler son in a forest kindergarten program in Northern California. It has been raining here for a solid month. “What happens when it rains,” I asked, assuming he was keeping his son home. “They hunker down under trees, learn how to be outside in the rain,” he said. I thought about my daughter, playing with toys, inside a heated and dry preschool room in town, and was a bit envious. It reminded me of this story from a couple years back, part of our extensive archive that deserves to be read and re-read. We also covered outdoor schools in a beautiful piece in AJ #20, by contributor Krista Langlois. You can order it, here, if you don’t already subscribe (and why wouldn’t you?). – Ed.

The outdoor industry wrings its hands while trying to figure out how to get more kids outside. Maybe it should look at supporting programs that teach children to be comfortable in the environment at the earliest stages of life, like in preschool and kindergarten. Germany has been doing this for decades through what’s called Waldkindergarten, or Forest Kindergarten. We’ve had such programs in the States for more than 20 years, but they’ve been slow to catch on.

That’s a shame. Playing outside has existed since the dawn of time and formalized education outside of walls for kids is at least a century old, yet it’s only been since 1993 that the programs in Germany have been recognized by the States, and only as day care at that. Even though America is decades into this effort, only a handful of programs in city centers around the U.S. have embraced it. Perhaps the concept is too simple for us: kids just go to school outside, all day long.

Daniel Buss lives in Munich, in a suburb near the forest. His daughter Aroura, just two years old, starts at the local Waldkindergarten this fall, a full three years before most kids start kindergarten in the States. The facility has a few portable buildings in case the weather is really inclement, but for the most part the kids are dressed to be in the elements. Munich even boasts an outdoor store just for kids this age, with a wide array of slickers and boots so that children can endure the grey snow and rain of winter for hours on end.

“If the children need a nap, they just put them in a wagon and tow them through the forest while they sleep,” said Buss. “I’d passed by the school on my way to work many times before my daughter was born and I knew it was the right place to start her education.”

I’m a father of three and my oldest is just about to enter conventional kindergarten, leaving his two younger sisters behind in preschool/day care. We’ve been blessed with excellent teachers so far, but there are already signs of how different systems impact both learning and attitude. For the past year, the older two have split time between a classroom-based setting and one that takes place in a far more creative space and with lots of outside time. 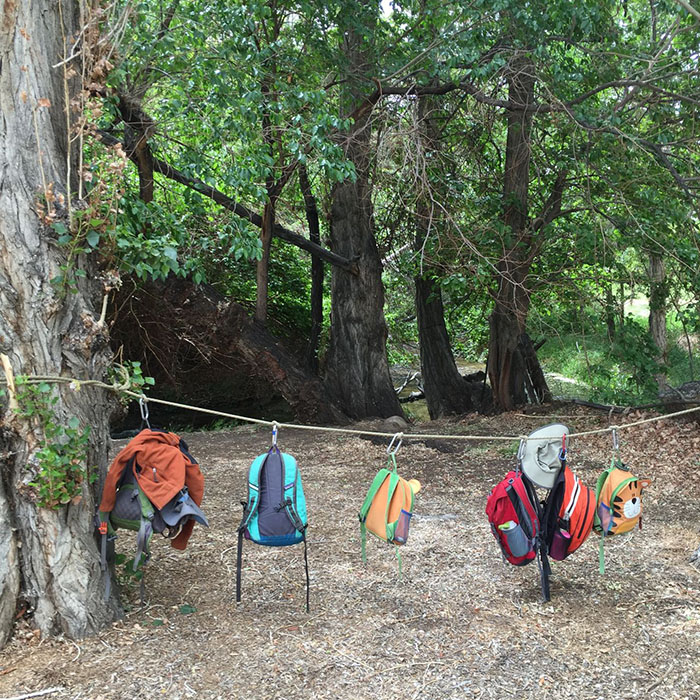 When you ask each how their day was, the difference in answers are telling. With the conventional schooling, the kids love their teachers, proudly tell me what they learned, and show off their writing or drawings. With the other however, they can’t be contained. They’re full of energy and jubilant in what they saw and touched and did during the day. In both schools, they receive their education, but there’s a striking difference in the way this is received based on whether it was taught in a classroom or outdoors.

The enthusiasm and joy of discovery sparked by learning outside are the root of the movement in the United States. For the past 17 years, Wild Roots Forest School has been creating early childhood education outside four walls. Originally located in Santa Barbara, California, Wild Roots has expanded to the Eastern Sierra town of Bishop, where Erin Boehme is the program director for the school and co-founder of he Academy of Forest Kindergarten Teachers. The academy serves as an educational vehicle for those looking to learn more, whether they’re parents for short sessions or teachers looking to certify in teaching these programs.

The Forest School in Bishop has the most extreme environment of the group’s campuses, with everything from snow, wind, and rain to scorching heat as part of the climate throughout the year. Like most outdoor athletes, the staff assumes the model that there’s no bad weather, just poor gear choices. Parents are required to visit the school before enrolling to ensure they are well-versed in how to dress and prepare their kids for a day outside. The program then leverages the weather and the seasons as part of the education tool. They rotate through four locations each month, thus students see two seasons in the same space, learning about the natural cycle and how it changes the environment around them.

To be a forest school teacher, you need to be both a naturalist and an early childhood educator, but the real key is combining the two. “You need to get the child to fall in love with the natural world,” says Boehme. “A lot of environmental education isn’t appropriate for young children,” she adds, in reference to concerns around environmental change or loss. “You need to have that heart connection first as a child, so you will protect what you love.” 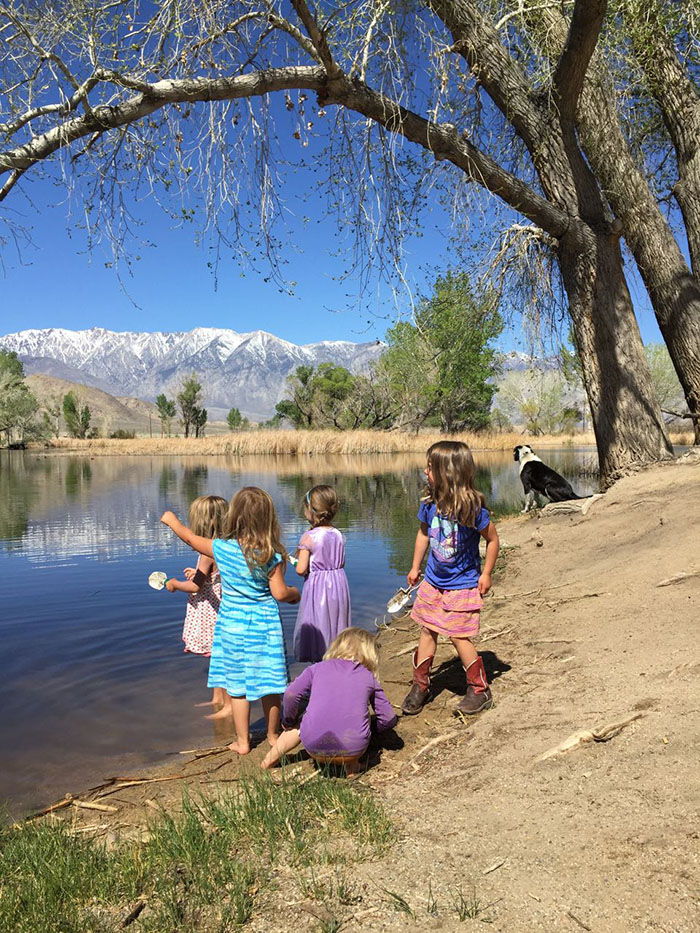 The program is designed to build a comfort and familiarity with the world. They harvest food from a garden they tend, cook meals for elders, and interact with folks outside the school who are doing work outdoors. They also provide harvested food to the local food bank. “The children start to contribute to society at this early age,” say Boehme, who encourages a community approach to education. “They need to have genuine experiences, not just curriculum-based education.”

By the end of the school year, students have understood the changing of leaves, been in rain, snow, and sun, heard stories of why Brother Wind shakes the trees and how the fallen branches return to the earth as nutrients, and they’ve held festivals to mark the changing of the seasons. Regarding the climate, “We build shelters for weather, we build fires for warmth, we do what’s appropriate,” added Boehme.

Each year, more parents and are drawn to these programs, as is indicated by the sold-out training sessions for this summer. While society in general has become more removed from nature, people are learning just how appropriate these schools are for building knowledge and skills that were once part of our daily lives.

A Spicy Peanut Sauce You Can Use For Something