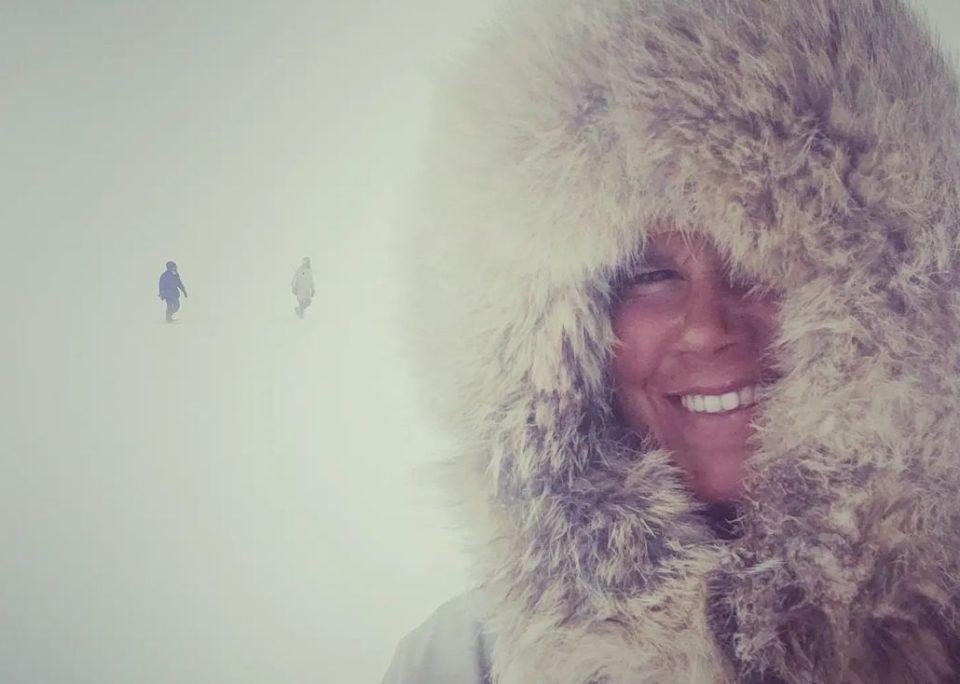 As wilderness guides specializing in winter travel, Kielyn and Dave Barrone were victims of their own success. The couple spent most of the last 10 winters on the land, but the transformative season-long trip they craved always seemed out of reach.

“In 2010 we did a 40-day trip, just the two of us, and we’ve always wanted to do another full-on trip like that, where you get to follow the moon cycles and just really be immersed into the environment,” Kielyn Barrone said.

Over the last decade, the Lure of the North proprietors have introduced hundreds of people to the nuances of traditional winter travel. From their off-grid base near Espanola, Ontario, the couple leads winter camping expeditions and traditional skills workshops, most lasting a week or two. They craft their own traditional winter clothing, snowshoes and toboggans, and teach their growing following to do the same. The business has flourished, which ironically left no time for the big trip the couple craved.

“We didn’t feel like we could afford to just say, ‘Okay guys, peace out—we’re leaving for the whole winter,’” Kielyn said. Then they hit on a solution. They’d do the winter-long trip with a rotating cast of clients dropping in for a few weeks at a time. The traditional route from Lake Superior to James Bay was perfect for such an expedition, with long stretches of wilderness and a handful of railway resupply points. They broke the trip into five legs and invited a select group of past clients to join them for part of the trip. But that’s not how it played out. 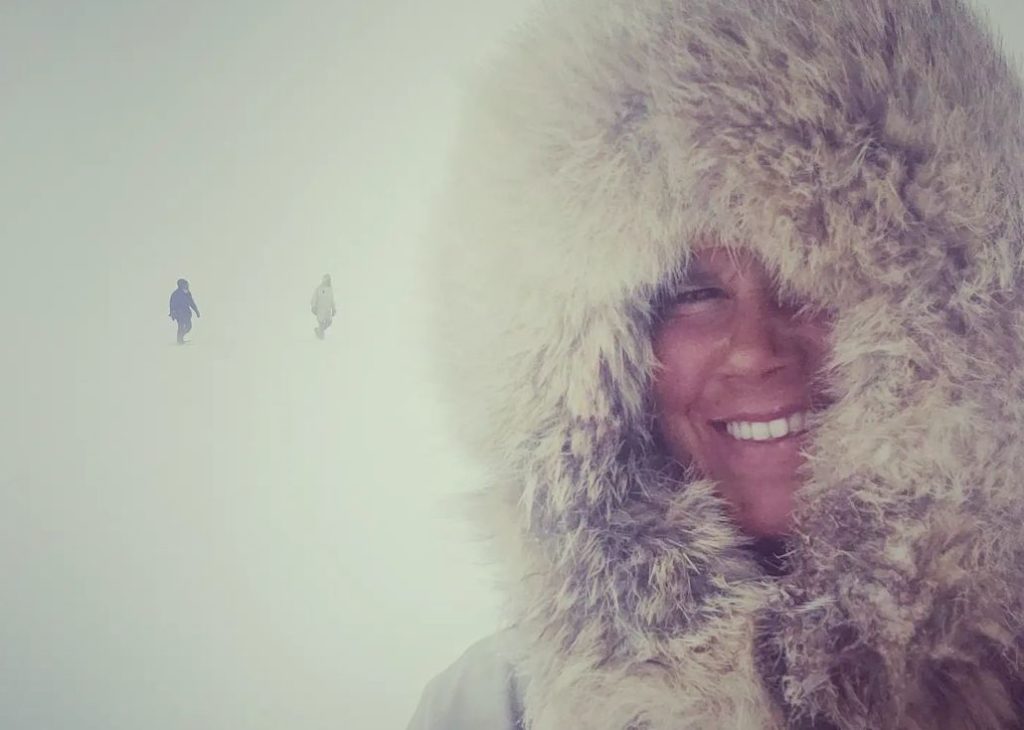 Kielyn Barrone near Moosonee, Ontario on the 70th and last day of the expedition. Photo: Lure of the North

“People came right back and said, ‘Count me in for the whole thing,’” Kielyn said. In early January, 10 clients joined the Barrones for the entire expedition, making a traveling tribe of five women and eight men, aged 32 to 63.

Most had made their own fur mitts, leather moccasins and canvas anoraks. “We wove our own snowshoes, but rather than beech which was traditionally used, we used 400-pound test fishing line,” Kielyn said. The team hauled their gear on toboggans made of ash and high-density polyethylene, but following traditional shapes. “We’ve taken what has been developed for centuries for this specific landscape by the indigenous people and used modern-day advancements in material choices,” she said. “It’s kind of the best of both worlds.”

Their planned route cut northeast across the province of Ontario, from the mouth of the Michipicoten River on Lake Superior, upstream to the headwaters of the Missinaibi River, then following that river to James Bay on the Arctic Ocean. That plan went out the window on Day 1, when open water on the Michipicoten forced a change, with the party marching through downtown Wawa Ontario and into the bush, following a series of lakes and the Shikwamkwa River. They crossed the Height of Land on Day 19, and followed the Missinaibi drainage all the way to James Bay on the Arctic Ocean. The journey covered more than 700 kilometers (435 miles) and took 70 days. 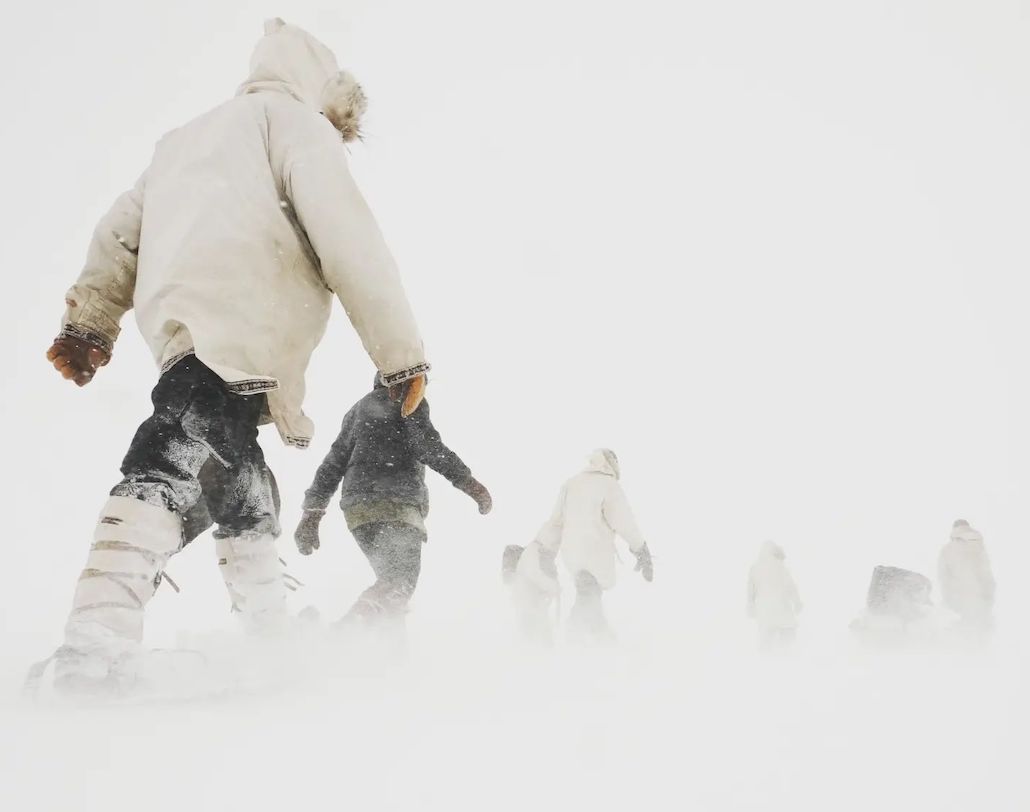 The crew’s last day was a 35-kilometer round trip from Moosonee, Ontario onto the ice of James Bay, in whiteout conditions. Photo: Lure of the North

“It was a bit of a balance of how early can we leave so that there’s ice on the lakes and rivers to start, but then how late can we push it so that there’s still ice at the end,” Kielyn said. “We ended up going a little bit of a roundabout way at first, but once we were into the Missinaibi headwaters section it was straightforward.” From the Height of Land to the sea the travelers were on the Treaty 9 Traditional Territory of the Moose Cree First Nation, grateful to be guests in that country.

Canoe trippers will recognize the general route, which for centuries has been a classic thoroughfare linking the St Lawrence to James Bay. Winter travelers follow the same rivers and lakes, with some seasonal variations in camp choice. “In the summertime, we’re looking for a nice point so that you’ve got a cross breeze and the bugs stay down. But in the winter, a lot of the places that canoeists wouldn’t even think of going end up being the nicest places for us to camp,” she says. “We’ll look for a sheltered camp up a small creek, or even a small pond or swamp. That’s where we find the standing deadwood to cook on and keep us warm.”

Traveling on frozen rivers demands constant vigilance. Whenever they suspected ice conditions could be changing, either Dave or Kielyn would be at the front with a carbon-tipped hiking pole, probing every step. The team followed in a line, walking on traditional-style snowshoes and hauling toboggans, each loaded with 80 to 200 pounds of gear and provisions. 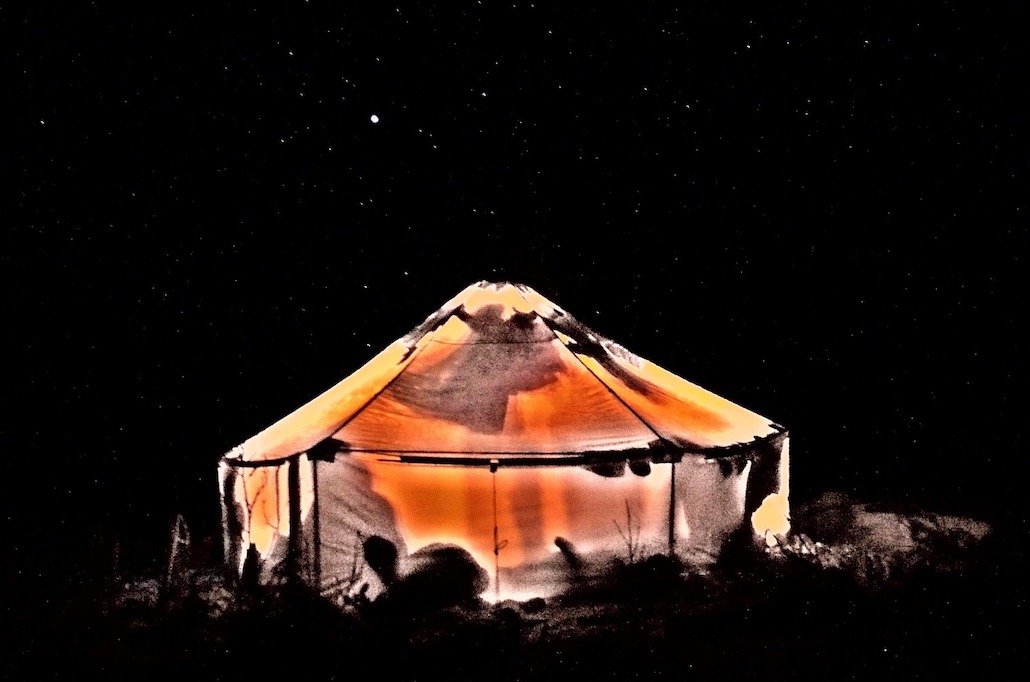 A typical night in the bush for the traveling clan. The group experienced Milky Way nights and spotlight moons through three complete lunar cycles. Photo: Lure of the North

The stronger travelers broke trail or pulled more weight. “That’s one of the beauties of this style of travel,” Kielyn said. “It’s kind of a self-equalizing system, so someone that’s feeling really strong could have a heavier sled but also could be up front breaking trail. Further back in line, it gets easier and easier.”

While most of the crew pulled 10-foot toboggans. Dave Marrone dragged a 12-foot sled, often at the head of the line. “His trail name is Moose Legs because he just he’s unstoppable,” his wife said. “He breaks trail all day and when we get to camp he heads out and pre-packs for the next day, if the slush is bad.”

Slush was the group’s nemesis for much of the way, particularly during the third leg, which started 28 days out of Wawa. “It was like one of those head-down sort of weeks, where it was just like, ‘Okay, this sucks but we have to get through it.’ And instead of people complaining, they really stepped up,” Kielyn said. 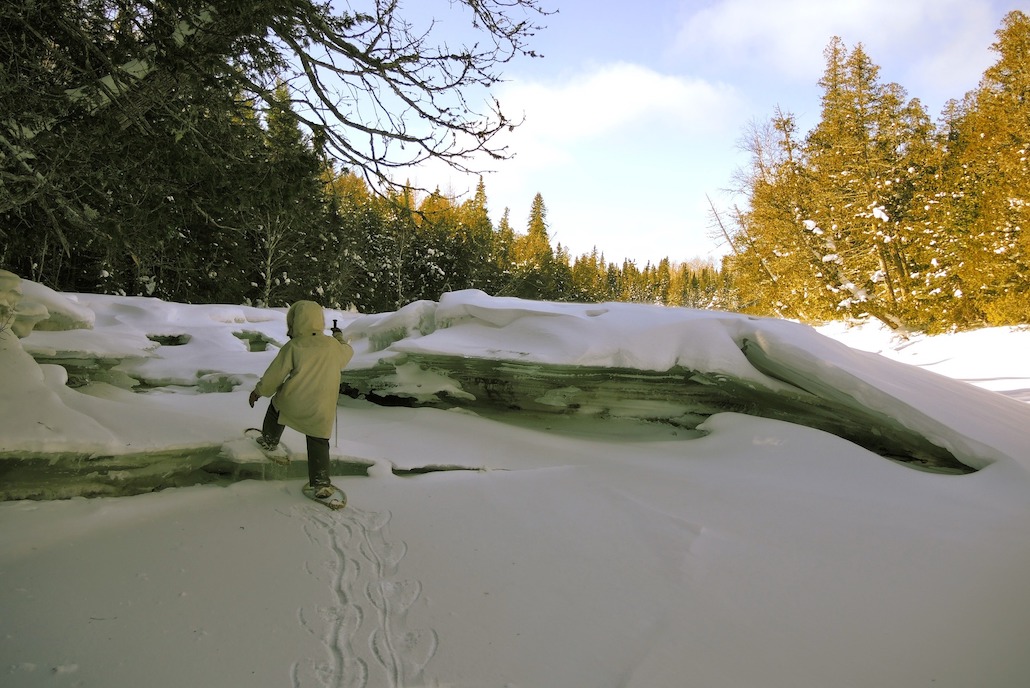 Crossing the Height of Land on Day 19. Photo: Lure of the North

The crew shared two canvas hot-tents, sharing meals, chores and just about everything else. “It was it was pretty incredible how we all got along and there was so much laughter,” Kielyn said. It was a cold February, with temperatures in the minus 30s and minus 40s centigrade, but the trip had no dramatic close calls. The Barrone’s Istagram page, @lurofthenorth, is full of mind-blowing photographs but few details of the hardest days.

“One of the things that we consider when we’re sharing our updates on social media is that those participant’s family members are watching,” Kielyn said. “So we don’t want to say, ‘Oh by the way, we all got sick and we were puking and shitting our guts out.’ Excuse my language.”

A stomach bug did work its way through the crew, even forcing a couple of unplanned rest days. But there were no cuts or burns, and only one notable injury. Kent Pilgram, at 63 one of three sexagenarians on the trip, fell crossing a patch of bad snow and twisted his knee. Friends of the Marrones were able to evacuate him by snow machine, but the departure left Pilgram devastated. He’d been having the time of his life, despite often struggling to hold the pace. 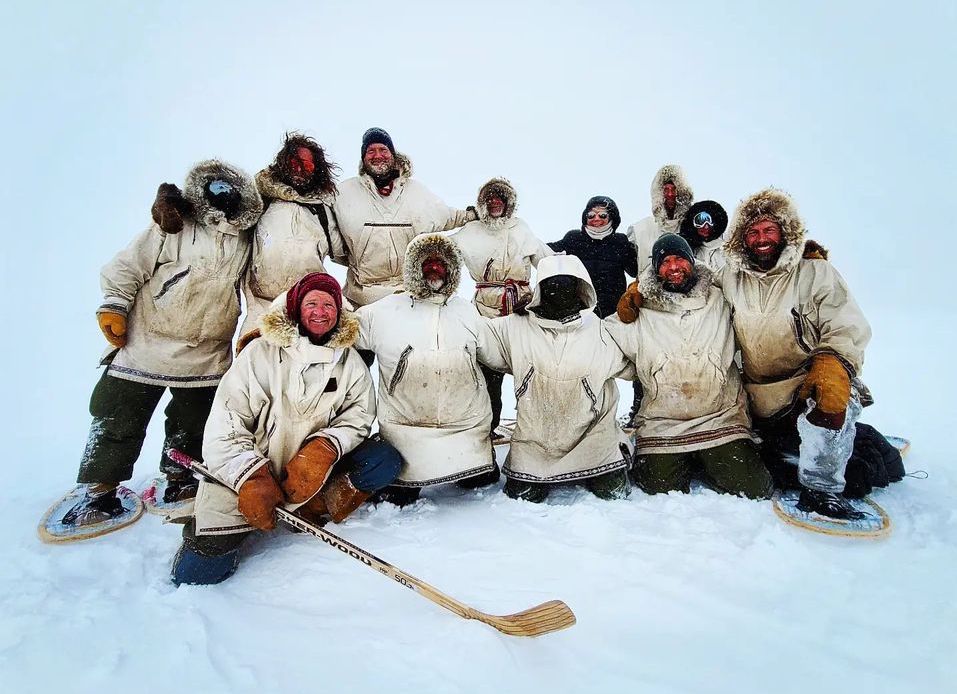 The end of the trail. Photo: Lure of the North

“He was probably the most tenacious person I’ve ever met. He just never complained, no matter how hard it got,” said Kielyn.

With Kielyn and Dave’s encouragement, Pilgram went home for 10 days to recover, and rejoined the group for the last five days. The crew reached the finish on March 26 just as they started: 12 travelers, together.

Next season the Barrones will be back to their regular schedule of workshops and one- to two-week guided trips. But guiding a diverse group of ten travelers on a season-long winter expedition has opened new horizons—and whetted their appetite for more. “Dave’s already mentioned crossing Greenland or some other big long route,” Kielyn said. “Now that we know it’s possible, maybe we’ll do something like this every five years or so.”

Let’s Not Squander the Miracle of a Wild Yellowstone