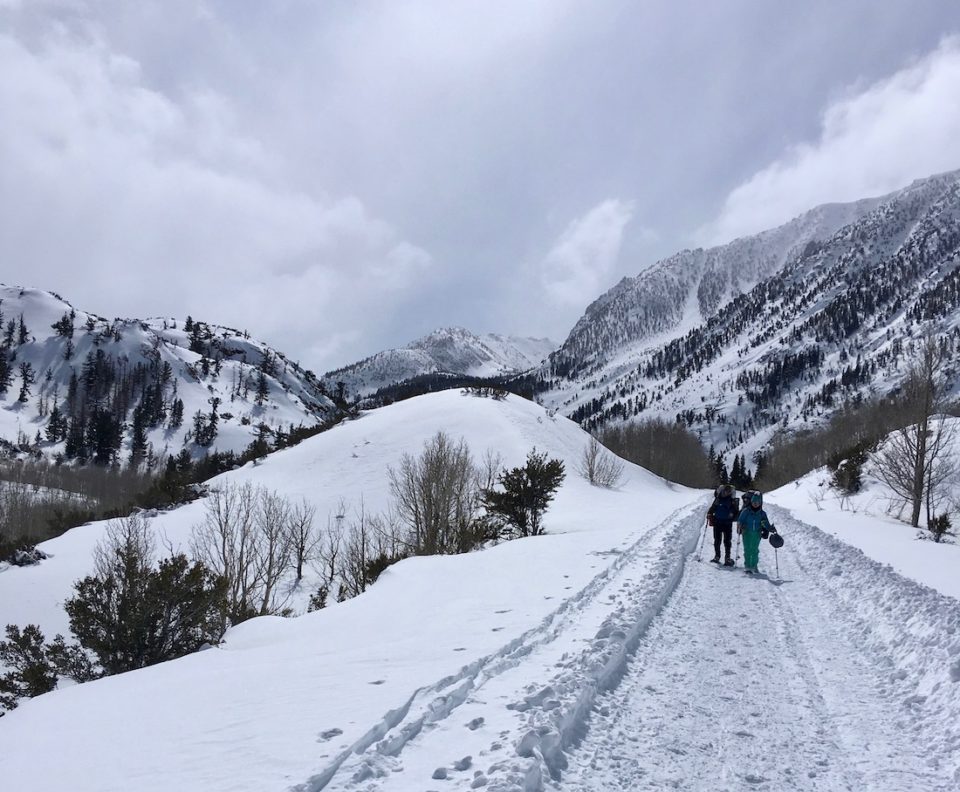 I kind of thought that I was going to die the first time I headed out on a winter backpacking trip. That might sound weird coming from someone who grew up walking two miles to school (okay—1.9, which is why I wasn’t eligible for a bus pass) in the snow during Wisconsin’s most frigid months and who now teaches others how not to die or get injured or suffer more than absolutely necessary while backpacking, but then again, we were all babes in the (snowy) woods at one point or another.

In no particular order, I was worried about starving to death, freezing to death, collapsing under the weight of my 50-pound pack, getting lost in the snow, developing frostbite, dying in an avalanche, pooping in subzero temps, and breaking through the ice and drowning on any number of waterways we might pass en route to our camp. As such, I loaded my overburdened pack with everything in my apartment that was constructed from down or fleece, four complete outfits, at least a pound of assorted medical gear, and nearly the entire contents of my refrigerator, including two full sticks of butter. Did I mention this was a weekend trip?

As it turns out, not only did I survive my first winter escape to the Sierra (albeit with a tender set of bruised hips and way too much dairy in my system), but I actually loved the experience.

The tradeoff for the brutally cold temperatures and the difficulty of snowshoeing with the equivalent of an angry toddler jerking at my back was immense: a stillness and solitude that would be impossible in the summer months, the stunning splendor of tromping around in a real-life snow globe, and a realization that if I simply replaced fear with knowledge, I could return to this place and the feelings I experienced there anytime I’d like.

Want to find your own frosty bliss as a four-season backpacker? Here are some tips to help you get started.

Preparation is key when winter backpacking

I once planned a multi-day section hike along the Pacific Crest Trail for the beginning of January. It was a high desert portion of the trail—mountainous, to be sure, but still heavy on the cacti. There had been a big dump a week or two prior to my trip, followed by a spate of warm weather; I figured the snow had melted. And it had—on south-facing slopes. On the shadier northern exposures, however, I sunk in to my calves. I’ll never forget the evening I toiled with my trowel and trail runners to carve and stomp out a snowy platform for my tent. Perhaps I should have checked the forecast.

Researching weather is crucial not just for your physical comfort, but also so you can think about how that forecast will affect conditions on the ground and thus, what gear you might carry. In early and late winter, freeze-thaw cycles that can lead to black ice, suncups (giant melted divots in the snow that are frustratingly difficult to traverse), and slush at various points in the day. Slick slopes might require the use of ice axe and crampons; deep, fluffy snow might call for snowshoes or skis. If you’re traveling through avalanche territory, you need to also check that forecast, know how to assess conditions once on the ground, and carry at the very least a shovel, probe, and beacon. My recommendation? Take a class, and practice assessment techniques to ensure your avy skills are up to par for backcountry trips.

Also remember: daylight fades quickly in the coldest months, so plan to keep mileage relatively short and goals modest. You’ll have a lot of downtime at camp, so bring a book, mp3 player, cards, star chart—anything to keep your mind off of the plummeting mercury. Oh, and bring a friend or two; they’re handy for company, sharing the load, and perhaps even getting your frozen butt out of a jam.

Learn how to travel in snow

I like to tell people that hiking is basically just walking, but with more dirt, so it stands to reason that backpacking is just walking, but with more dirt and lots of stuff lashed to your back. Winter backpacking, however, is neither of these things. It is stumbling awkwardly while trying to keep the weight of your stupid-heavy pack from pitching you face-first into a pile of white stuff. It is thinking the snow is compact enough to walk across using only a pair of waterproof boots and your feet inside of them, but instead discovering as you posthole into oblivion that the snow is actually very soft, littered with leg-breaking boulders, and quite possibly bottomless. It is lumbering around like an uncoordinated yeti with tennis rackets strapped to its feet, then tripping yourself right into the nearest snow bank. I am not speaking from experience. (Yes, I am.)

That is, unless you learn how to properly travel across snow, ice, and everything in between. Trekking poles are clutch for balance, but they’ll sink into powder; be sure to screw un a pair of snow baskets, which are significantly larger than the tiny circular “mud baskets” that come standard with most poles. On a steep uphill push, you may want to either create switchbacks or use the toe of your boots to kick “steps” into the snow; a few quick, choppy horizontal kicks will create a tiny platform that allows you to continue forward progress. For downhills in softer snow, master the art of the plunge step, which is simply walking down, making a stabbing motion with your heels as you do so.

If you’re carrying crampons and an ice axe to traverse steep, slippery slopes, be sure you know how to properly self-arrest, and make sure your crampons fit your boots correctly. And if you’re new to using snowshoes, practice flopping around in them before strapping on a pack. It’s especially important to learn how to turn properly (slowly and with a wide stance, using your poles for balance), to avoid tripping over your own snowshoes—and maybe even more important to learn how to right yourself once you’re flailing around on the ground like a frozen turtle (remove your pack, roll onto your belly or side with your feet aimed downhill if on a slope, and use your poles to push up from the ground). It will happen. And your friends will laugh before hoisting you up.

Finally, you might be surprised by how different your favorite trail looks when blanketed in snow—and how difficult it is to actually stay on trail. Cross-country travel is the norm in the winter, so carry a map and compass (the batteries in phones and GPS devices can drain in cold weather) and know how to use them. 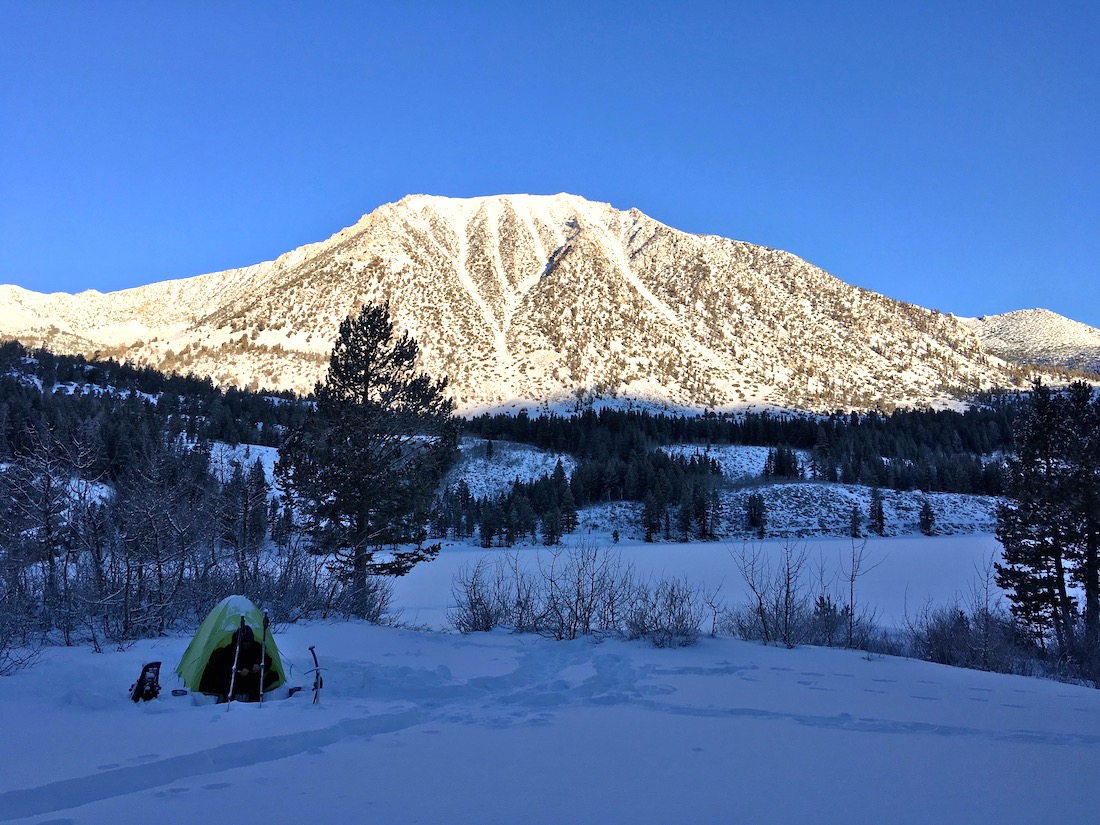 A common technique employed by new backpackers is what I like to call “packing your fears”—that is, tossing in anything (and often two of anything) folks think will help prevent any of said fears from coming true. While on the Pacific Crest Trail, for instance, I learned that John Muir Trail hikers were very, very afraid of going hungry, judging by the high-quality bounty they shed in hiker boxes along the way. (As a side note, thank you to the hiker who left a pile of PayDay candy bars in the free buckets at Muir Trail Ranch; I ate one for breakfast every single day for a week.)

But of course, you do want to pack the things you’ll need to stay safe in winter conditions. We’ve previously covered winter camping tips—all of which are applicable here—but here are a few more items, in addition to standard backpacking gear, you might haul along for cold-weather trips:

• 4-season tent: Burlier (and heavier) than their 3-season counterparts, these are constructed to withstand wind and snow. Have I gone on winter backpacking trips with a 3-season tent when there was no snow in the forecast? Yeah. Have I subsequently had to clear my tent of small snowdrifts after a blustery evening? Also yeah.

• Packable shovel: This is part of your standard avalanche kit, of course, but even if you’re not traveling in avy territory, you can use it to carve a tent platform, dig out your tent stakes the next morning, and excavate a cathole in the frozen tundra. (Honestly, unless you like being very, very frustrated, just carry a WAG bag and haul out your waste.)

• Bonus layers: It goes without saying that you’ll want an appropriate layering system for hiking in, but you’ll also want some cozy wear for all of those long, dark, cold hours at camp. If I’m feeling fancy, I bring down booties and a Therm-a-Rest Honcho Poncho (please refrain from all judgment until you’ve posted your buns on a bench made of snow in single-digit temps), but honestly, as long as you keep it dry, your sleeping bag can serve as a bonus layer.

• Cord: At various times during winter backpacking trips, I’ve lashed outerwear, shirts, pants, gloves, snowshoes, ice axe, crampons, firewood, and snacks to the outside of my pack. Carry plenty of cord (I prefer lightweight bungees, since the hooks make frequent attachments and detachments much easier) to display your wares.

• Sled: I mean—you’re not really going to carry all of that stuff on your back, are you?

• Take care of your body
During a particularly gnarly winter backpacking trip last year, our group suffered a near-catastrophic hydration failure. We were camped near a creek, but icy banks rendered it inaccessible, so we had to melt snow instead. In sub-zero temperatures, stoves sputtered out, fuel canisters ran dry, and tempers flared. In the end, we were left with only two functional stoves for a group of nearly twenty people. I can still taste the sweet-salty delight of the gallon of Gatorade I gulped down upon our return to civilization. 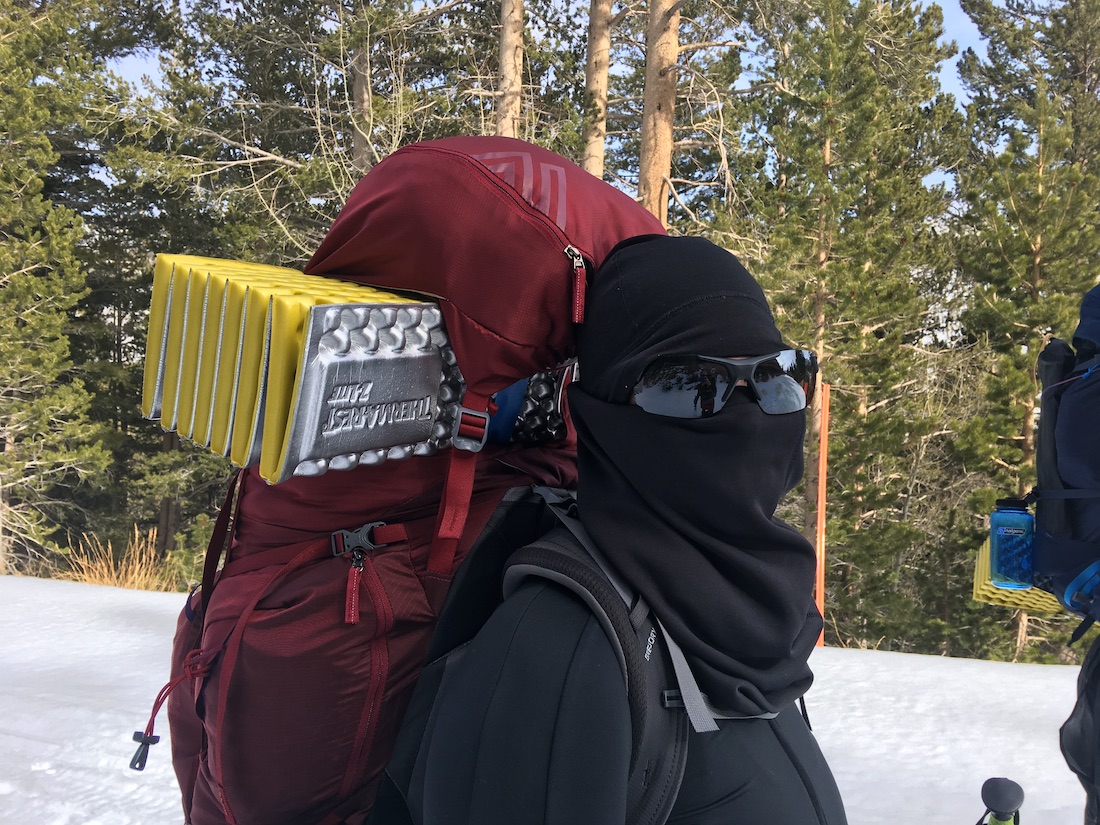 While you might not feel thirsty on a cold-weather trip, it’s pretty easy to judge whether you’ve become dehydrated—just look for bright yellow snow after you pee. Since it’s hard to stay interested in gulping water while I’m shivering, I supplement my intake with caffeine-free tea, cider, and hot chocolate. For some folks, a hydration bladder is helpful to keep water front-of-mind; be sure to blow back into your tube after each sip to ensure the wet stuff doesn’t freeze inside, and keep it inside your tent at night. I prefer Nalgene bottles (I keep one clipped to the front of my pack for easy access) instead; I can see how much I’ve been drinking, and can fill them with boiling water for a nighttime cuddle buddy. Oh, and don’t forget an extra fuel canister—melting snow will suck ‘em dry.

My final tip? Don’t skimp on the calories—you’re going to be burning a lot of them. Even though I am a grown woman who knows better, I use winter backpacking trips as an opportunity to load up on the fattiest, saltiest, sweetest, most bad-for-you-est foods I can think of. I guarantee you will find a candy bar of some sort in my left hip belt pocket and a clutch of Swedish Fish in the right. For breakfast, I will feast upon ramen noodles coated in peanut butter, soy sauce, and Sriracha. For lunch, I am not above sprinkling Fritos or Cheetos into my instant mashed potatoes. And dinner—oh, dinner!—is nothing less than an entire family-sized portion of tortellini. That stuff I said about solitude and beauty and quiet and yadda yadda? Okay, it’s all true. But knowing that there’s a frozen Snickers bar burning a hole in my pocket makes it all the much better.