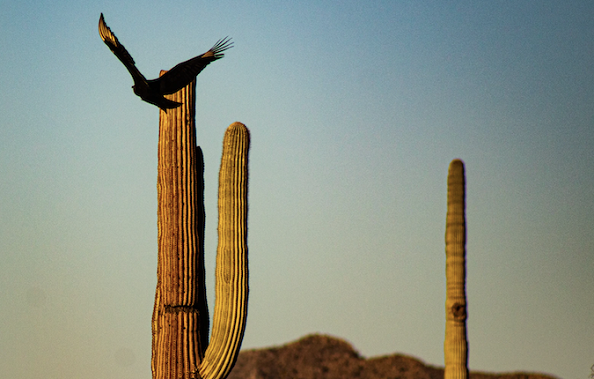 This time last year, I was doing a legal “water drop” on public land close to our border with Mexico, visiting as an unofficial and self-funded reporter to learn more about this local effort.

What I found is that volunteers here are the unsung, unseen heroes doing the real work of humanitarian aid — and who, by the very nature of what they do, often prefer to remain silent.

We hiked in a remote region of southern Arizona on Bureau of Land Management land, all of us weighted down with backpacks filled with water, and equally weighted with the sorrow of the reality here. More people die in this region than in any other place along the border. The UN agency International Organization for Migration reported that 650 deaths occurred border-wide in 2021, making it the deadliest year they’ve ever recorded. Nothing indicates that 2022 is going to be any better.

We placed gallon jugs of water under a plastic tub held down with rocks, and when I stood up, feeling lighter, I still felt weighted by the contradictions of this place. Sure, I know: Living in contradiction and the ability to hold opposing thoughts and emotions simultaneously is a hallmark of maturity, but still, sometimes the contradictions are so extreme that the brain shorts out. Cases in point:

Nearby, there’s the hyper-ugly Barry M Goldwater Range, used for bombing practice, and the hyper-beauty of the nearby Organ Pipe National Monument. There’s the beauty and silence of the desert, despite the roar of military fighter jets above.

An area of such diverse life. An area of such death. And perhaps the most surreal contradiction of all: The assault on basic human kindness. How did we get to a place where offering shelter or a ride is a crime? A federal crime, with a prison sentence no less?

A friend told a story in which she came across a young man on foot on a borderlands back road, and could not drive him to a medical facility, despite his request for her to do so, because she knew she could be arrested for transporting an illegal immigrant. She was already on the Border Patrol’s radar. She could give him water and food and a blanket—legal—but could not give him the ride he asked for—illegal.

There were tears in her eyes—she had, perhaps, left this man to die, but if she had allowed him in her car, she could have ended up in prison and jeopardized her other work helping migrants, which might result in other lost lives.

My head hurt. My heart hurt. This place felt overwhelming.

So are the related questions: Was I providing humanitarian aid? Or littering? Should I spend my time doing this small physical act? Or working to elect better politicians? Should I focus on this place so far from my home, or stay local?

Why is this crisis on the border so ignored? Why do North Americans seem willing to support refugees from other countries—which I applaud—yet seem so resistant to helping those closest to us, who are also fleeing serious violence, political persecution, drought and hurricanes?

Then there are the related issues: aquifers drained near the border wall, wildlife migrations interrupted, the Tohono O’odham peoples split apart, with relatives on the U.S. side not easily able to visit relatives in Mexico as they have since time immemorial. Such a clearly bad situation on so many levels.

As I walked back to an old Subaru, my pack much lighter now, my shoulders still felt the weight. I wondered if anyone was watching me—waiting for me to be gone. Waiting for a simple, clear, uncomplicated moment to continue a journey.

Laura Pritchett is a contributor to Writers on the Range, writersontherange.org, a nonprofit dedicated to airing Western issues. Her novel Red Lightning is based on human rights issues at the border. She directs a master’s program in nature writing at Western Colorado University. www.laurapritchett.com. Top photo: platours_flickr

Book Excerpt: Between an Avalanche and a Hard Place