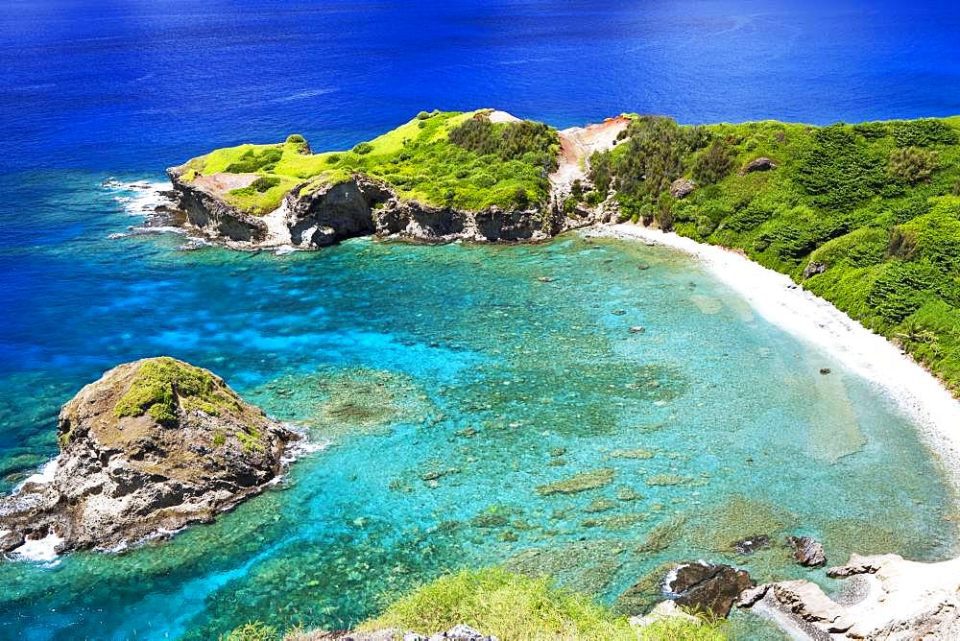 Ogasawara Islands also known as the Bonin Islands. This islands in particular is Chichi Jima and all around me surrounded around this boat is the Pacific Ocean the sea. We have so much beautiful marine life underneath the ocean here this is called the Galapagos of the east for a reason there’s so many unique species just indigenous to this area.

I’m really excited to see what’s underneath the sea here, I’ve never done an episode like this so I’m pretty excited to start let’s go dive in Ogasawara is a scuba diving jewel in the Pacific. It’s a 24 hour ferry ride 1,000 kilometers from central Tokyo ferry is the only way to get there no flights so you have to be committed to staying for a week.

The main island almost all dives depart from Ogasawara village the main town the island history is ternational tied with whaling but since it was returned to Japan in 1968. It’s become a sanctuary for wildlife and it shows with the incredible diving under the Pacific.

Some are world war ii wrecks like a first dive in Futami Bay. Our dive master gives us an overview of our first dive. The dive site floor depth is 33 meters or 108 feet. It’s a Japanese submarine chaser number 50 kou Sante was built by Hitachi zosyn in November 1943 sunk by Allied forces less than a year later in July 20th 1944.

Descend slowly and equalize the pressure by swallowing or pinching your nose visibility is good but it gets a little tougher to see near the bottom where the wreck rests an old world war ii helmet the ship has been taken over by the sea.

It’s a sand tiger shark shit’ll juanny in japanese now they say they’re harmless the divers but I see a shark I try to get out of the way but I’ve lost sight of them. They could be anywhere down here 25 metres below the surface.I mean I could a was it dangerous at all we saw they were not one, not two but three sharks down there very big ones and they’re gonna be here for just a couple more weeks. They’re here and none day it’s not Michael gonna eat or no yeah so the Sharks are gonna be here for just another couple weeks. 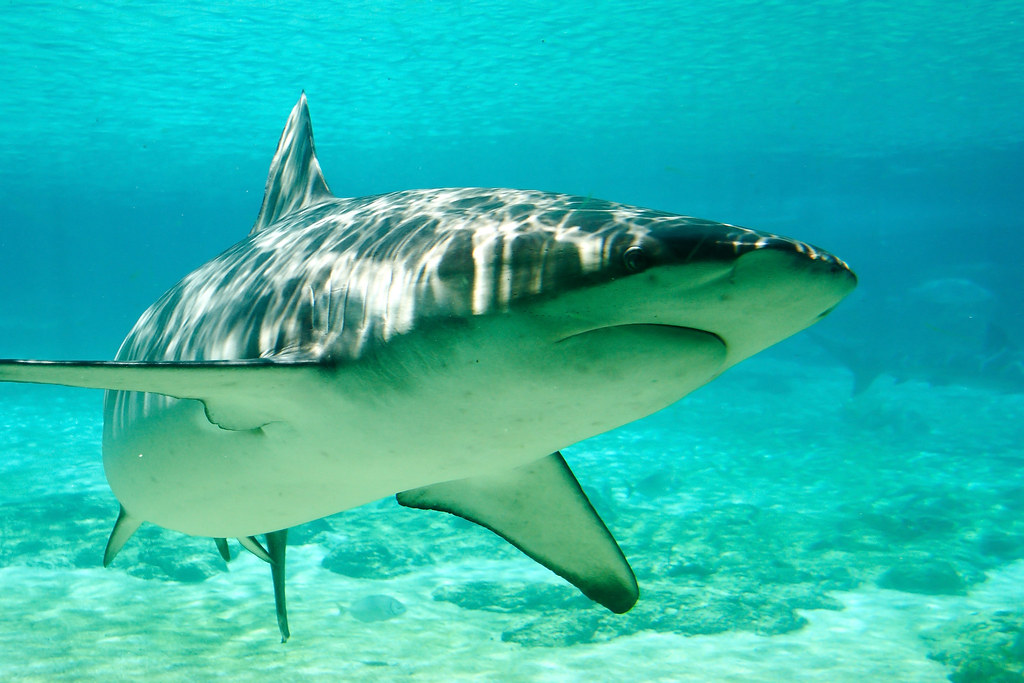 I was somewhat nervous they had big teeth. I do not want to be eaten so maybe let’s just not do that again but it was still pretty cool ten minutes later I was still pretty impressed that was just awesome the beauty of this island. It is not just below the sea the deep blue color of the Pacific year is called bone-in blue. It’s so clear in the shallow parts.This is truly a paradise. It is the blue color that we often see in dreams with white sand beaches and sunshine. You will very easy to fall in love with the Ogasawara Islands after you come here. 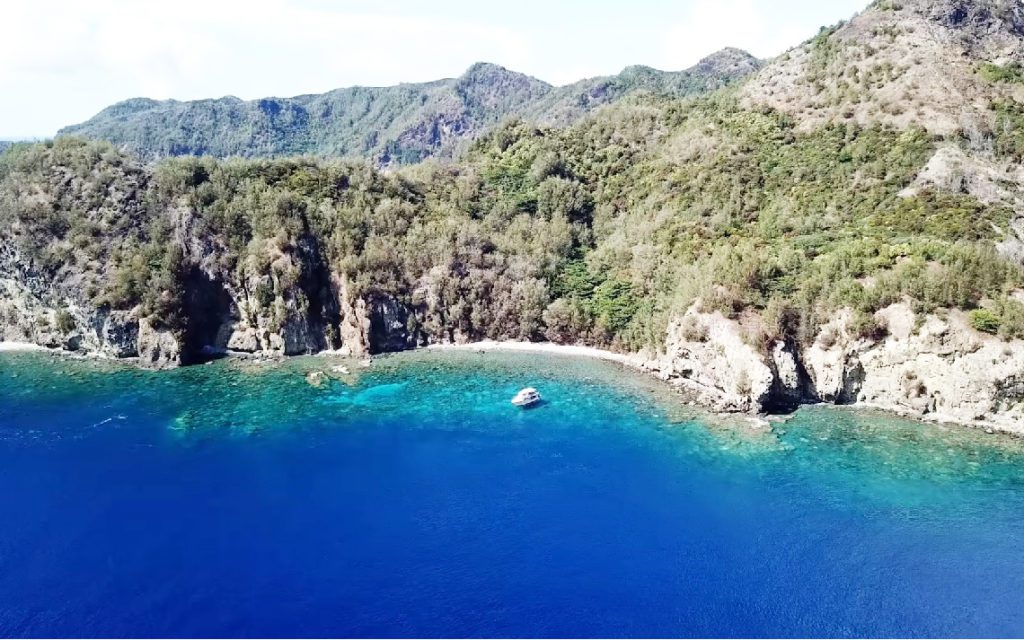 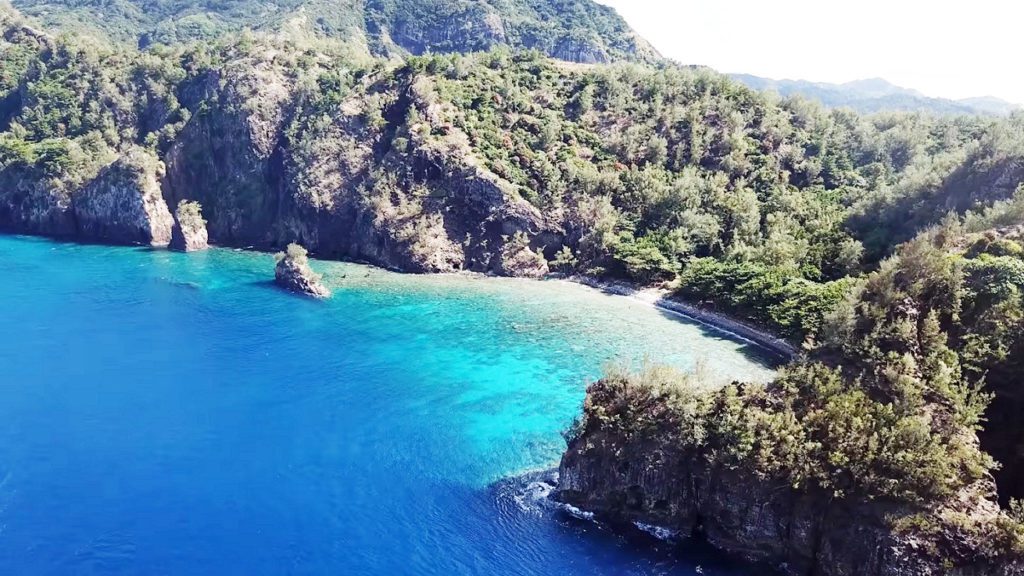 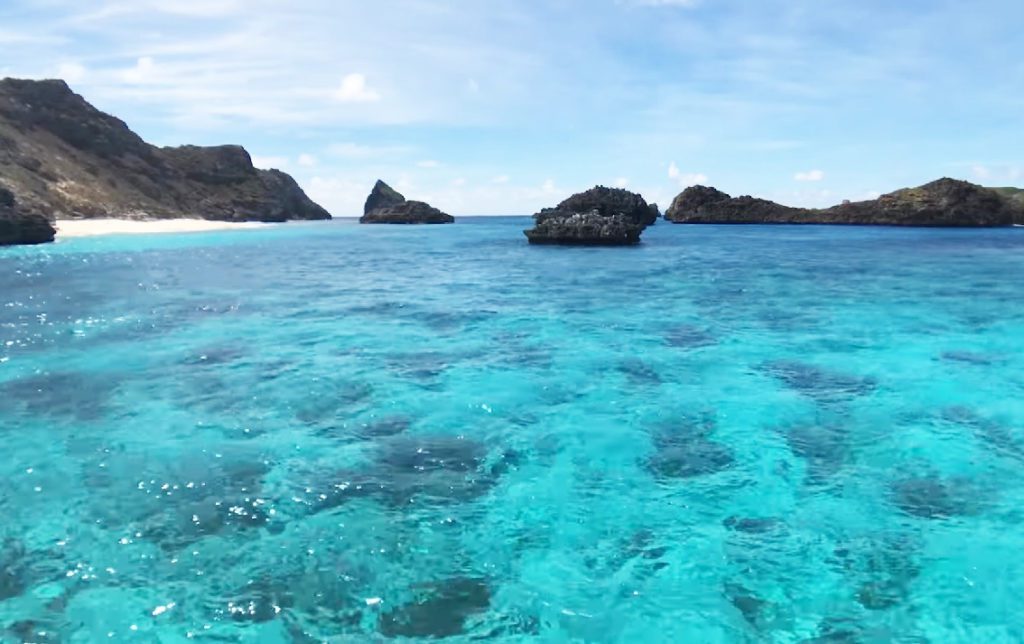 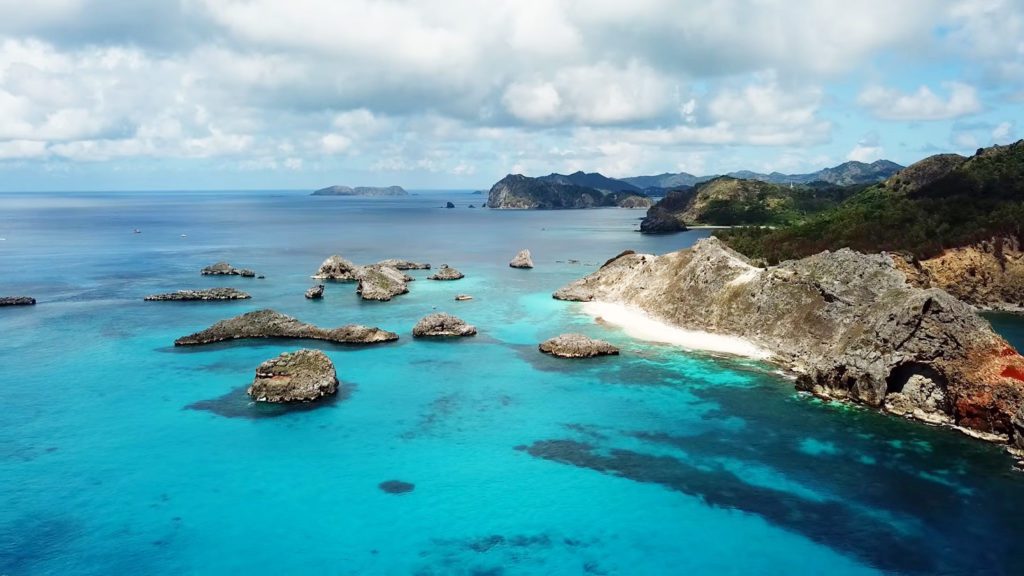 The southern island is called Minami Jima. It’s where sea turtles go to lay their eggs and a wildlife preserve for birds.The weigh-in is under the rock arch the water here is a warm 27 degrees Celsius 80 degrees Fahrenheit. Minami Jima is famous because this beach is where a lot of the turtles will lay their eggs. 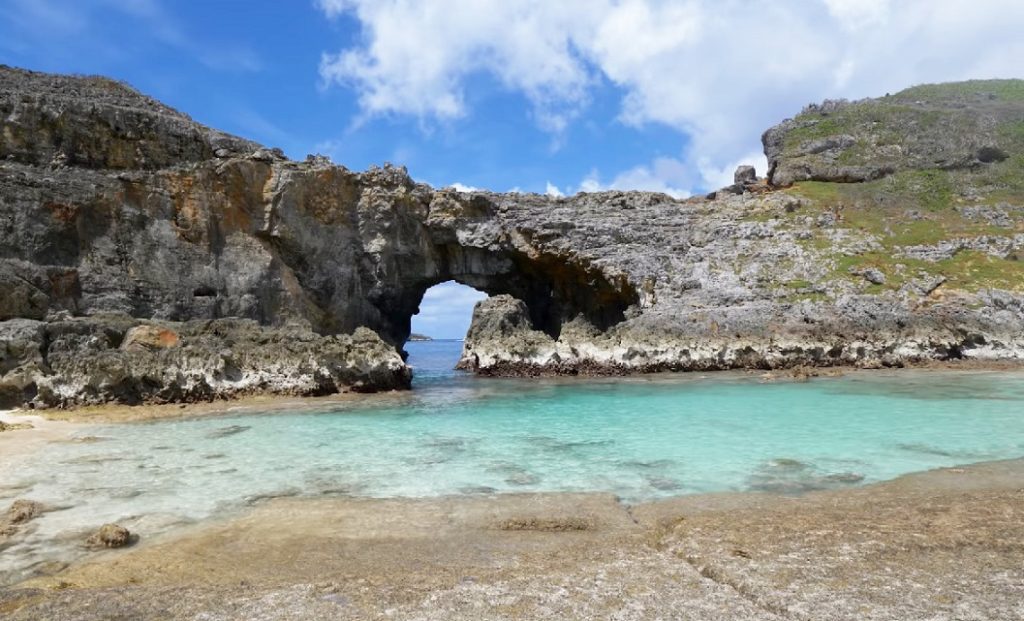 When they hatch there’ll be a lot of these little baby turtles making their way into the protected sea through the tunnel over there and it’s just an amazing sight to see we won’t get to see that today. The center of the island is sandy like a little desert perfect for laying eggs if I were a sea turtle. We didn’t see one little guy make his way into the sea.

It’s important not to disturb the wildlife in any way so we cheered him on it’s not easy to swim through the waves to the open sea with those little arms.But with a lot of effort he made it and we saw him leave us heading north with happy travels.

Little guy the captain knows a spot to see one of Ogasawara’s friendliest visitors. We travel 30 minutes to the north.Above the water one jump so high that I thought she was trying to fly. Anna’s is a once-in-a-lifetime experience for most formally known as the Bonin Islands. 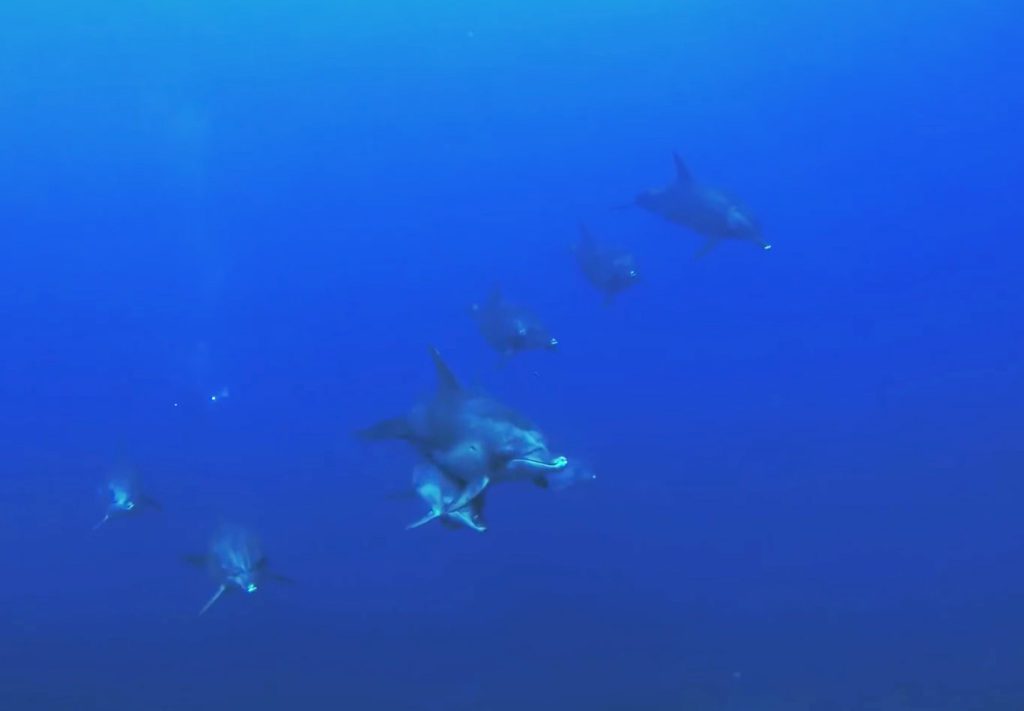 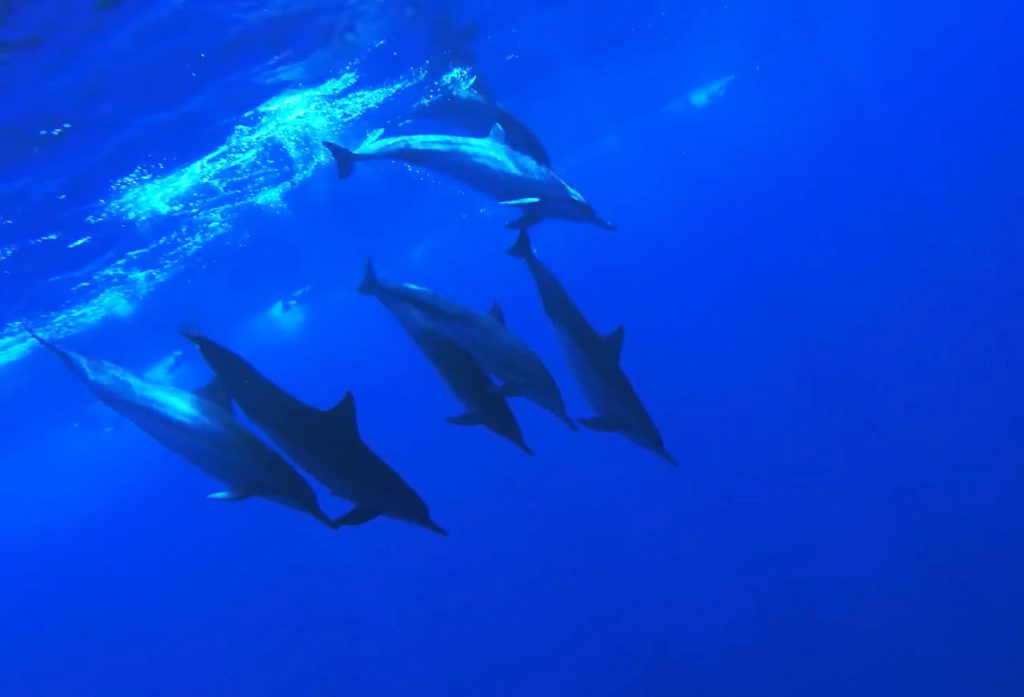 The animals and marine life are very friendly not scared of humans like in the Galapagos which is why this place is called the Galapagos of the East under water. Not disturb him or he’ll just cruise away like that. This small white tip reef shark is patrolling the neighborhood. Some beautiful sea turtle swimming majestically in the waters above .

The beauty of scuba diving is that you can feel like you’re flying around just like the marine life most parts of the sea here have incredible visibility even at deeper recreational diving depths. 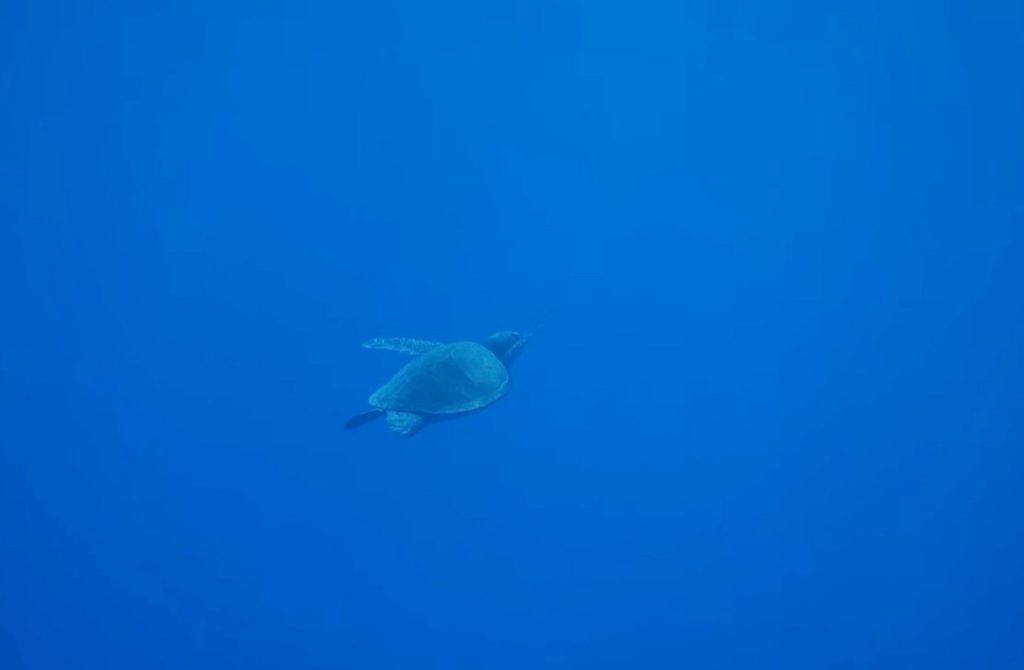 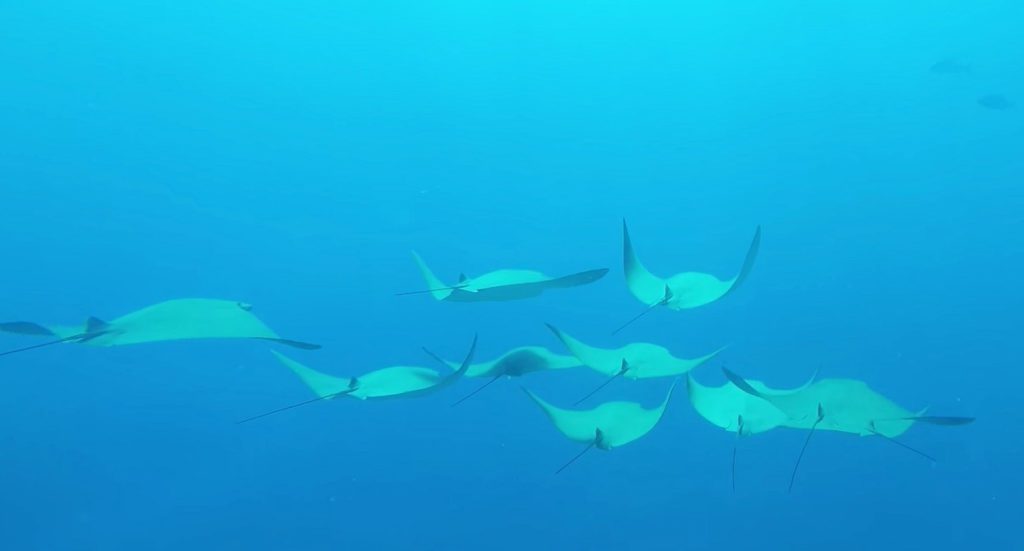 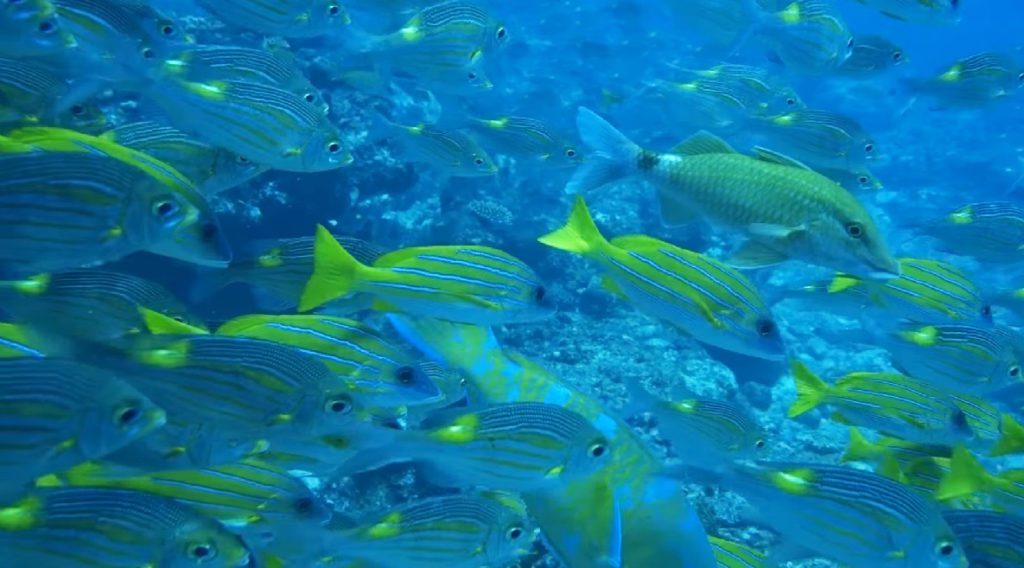 On one dive we encountered a school of manta rays on their way somewhere else .Here’s one we often see a sushi maggara but this time, he’s the one looking for a meal.

The trumpet fish shadows another fish looking for a good meal.

It’s an odd couple. We have to remember that we’re just visitors in the fish world down here once we encountered a mature tiger shark, the non friendly kind.

It’s rare to see such large ones in the area and he took off when he saw the odd-looking scuba divers. Good news for us advanced divers here often explore the caves.

You can find a lot of unique marine life like lobsters hanging out in the cracks these lobsters came out to welcome us or shoo us away. It’s a fun peaceful world 25 meters under the sea shall.This is beautiful place. It’s worth the 24 hour ferry ride and one week’s day if you ask me one week isn’t enough.

A Piano and enjoy the best places to visit in Iceland

The Faroe Islands trave guide for the first time

I have been checking out a few of your posts and it’s clever stuff. I will make sure to bookmark your blog.

Great post, you have pointed out some fantastic points, I likewise conceive this s a very wonderful website.

I think this is one of the most significant information for me. And i’m glad reading your article. But wanna remark on some general things, The website style is ideal, the articles is really great : D. Good job, cheers

Wohh just what I was searching for, thankyou for putting up.

Howdy! Do you know if they make any plugins to help withSearch Engine Optimization? I’m trying to get my blog to rank forsome targeted keywords but I’m not seeing very good success.If you know of any please share. Many thanks!

Excellent beat ! I would like to apprentice at the same time as you amend your site, how can i subscribe for a weblog website? The account helped me a acceptable deal. I were a little bit acquainted of this your broadcast offered vivid transparent concept

Interesting take on the topic. I agree with you completely