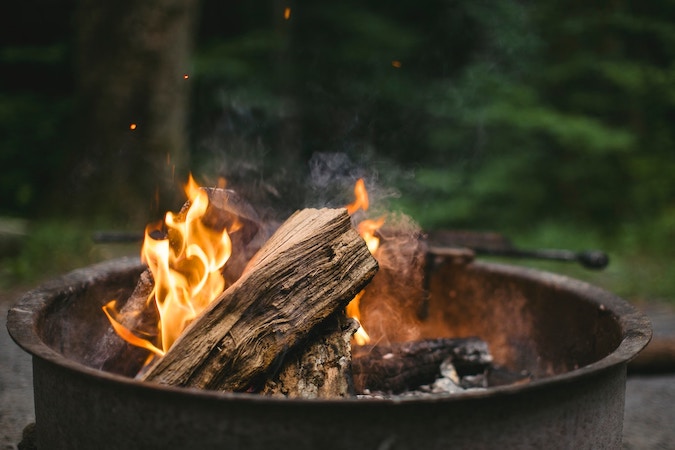 Thanksgiving is my favorite holiday. You just gather with people you love on the last Thursday in November, and give thanks for what you have. It’s not overly commercialized, and doesn’t belong to a certain religion or group. My only gripe with the holiday is that it’s usually held indoors, rather than the desert rivers, ocean beaches and wooded campsites where I prefer to spend quality time with family and friends.

For years, I accepted the idea that a traditional Thanksgiving feast doesn’t translate well to the outdoors. That’s what everyone said, and that’s what I believed. Until I tried it for myself.

The first time was a little scary. Cooking a turkey is the culinary apex of most people’s year, and it’s naturally fraught with anxiety. What if the bird comes out dry, or burnt, or under-done? What if every bite goes down like a ball of dry cotton, bathed in cranberry sauce, lumpy gravy and disappointment?

Now you want to add the complication of doing it in the woods, over an open fire?

Some say it can’t be done. An outdoor magazine recently asked an aspiring celebrity chef how to roast a turkey over a fire. He told them to spatchcock the bird and then carve off morsels in layers as they cook. Forget about serving a complete Norman Rockwell-style bird, he said, because it can’t be done.

“If you have plenty of wine on hand,” the article states, “snacking on the bird bits at a time feels festive and communal, and you won’t regret not having a finished, sit-down meal.”

It makes me sad that the handsome cookbook author in that article will never taste a perfectly roasted whole turkey, slow-cooked over a hardwood fire. Because the best turkeys I’ve ever cooked, or tasted, have been done that way. The secret—check that, it’s a time-tested technique—is spit-roasting. Outdoor cooking enthusiasts from the Cree to country music icon Kenny Rogers have long recognized the superior convenience and flavor of fowl slowly turned over a fire.

Battery-powered rotisseries can be had for as little as $50, and delivered to your door in plenty of time for this year’s festivities. Though I’ve only used electric spinners, others have done fine with a length of green wood and a couple of forked sticks.

The techniques and tricks below use an Auspit rotisserie, which I discovered years ago on a hot August day at the Outdoor Retailer show in Salt Lake City. A man was staked out in front of the convention center playing a didgeridoo and wearing nothing but a leather loincloth. He called himself Jonny Rotisserie, and was the one-man CEO and chief evangelist of Auspit USA. Next to him was the Auspit itself, the “Little Aussie Wonder,” slowly spinning a chunk of meat over a plate of briquets.

My preference is wood because I like the smoky flavor it imparts and I really love poking at campfires. Pecan, hickory, and apple are good choices.

Jonny cut me a deliciously juicy, smoky slice, and I immediately arranged to review the rotisserie for a magazine that no longer exists. The Auspit, though, is still going strong a decade later. After a string of successes with lesser meats, friends nominated me to spit-roast a turkey one Thanksgiving at San Onofre State Beach. That first bird was nerve-wracking. I tried to get fancy, slipping nuggets of garlic butter under the skin and wrapping the 12-pounder in foil. The idea was to make a kind of steam tent that would allow the bird to cook evenly, but all it did was block the heat. When I moved the bird closer to the fire, the garlic butter dripped onto the foil and burst into flame.

I ripped the foil off and hoped for the best. And that’s exactly what happened. A little more than two hours later the turkey was nicely browned and the meat thermometer registered a spot-on 165 degrees. My friend Jen, the best cook I know, popped a slice into her mouth and proclaimed it perfect. The point is, this is hard to screw up. Let me say it again: Roasting a turkey outdoors is easy, and it’s incredibly delicious.

How to Roast a Turkey Outside

First, Get a Spit

Johnny Rotisserie’s Auspit USA is no longer shipping product, but you can still order the original from down under ($220 Australian, about $150 U.S.) or buy a similar spit for as little as $50. This one would do the trick, or just Google “battery-powered rotisserie,” and shop around a little. The thing to look for is that the height of the spit can be easily adjusted.

Most sources give about 14 pounds as the maximum for a spit-roasted bird, though I once did an 18-pounder with no trouble. The key is to choose a turkey that’s just big enough. You’re out in the woods. You don’t want leftovers.

You can use charcoal, hardwood, or a mix of the two. My preference is wood because I like the smoky flavor it imparts and I really love poking at campfires. Pecan, hickory, and apple are good choices. Whatever you choose, do not put the bird directly over the flame. As Jonny puts it, “Indirect heat is your friend. Whether cooking over a wood fire or charcoal, try to build a ring of fire around your turkey or to one side. Be sure that your ‘heat real estate’ extends beyond that of the bird to ensure that you are getting enough heat to the ends of the bird.” A 14-pound turkey will take about 2.5 hours, so whether you use wood or briquets you’ll want to feed fresh fuel into the far side of your fire, and scoop coals toward the bird.

Where you build your fire depends on the setting you’ve chosen for your outdoor Thanksgiving. Campground firepits will do, but it’s nice to have the flexibility of a bombproof steel firepan, or even a makeshift one. For that first bird at San Onofre, I shoveled briquets into a foil baking tin and placed them under the turkey on the edge of a big concrete firepit. Simple, easy, and cheap. These days I use a pair of NRS firepans—a 20-year-old rusted-out version that lives in the back of my garage and it’s shiny replacement—and set them up about 18 inches apart with the bird in the middle. That puts indirect heat on both sides of the turkey.

Weber grills work magic for turkeys too. The company has good recipes and instructions on its website, and though the Weber rotisserie accessory uses a corded motor, the D-Cell Alibaba motors fit it perfectly. So if you can get your Weber kettle to your campsite, it’s a good option.

Wash and thoroughly dry the bird, and rub it down with your favorite seasoning. However, do not stuff your turkey. A quartered apple or a couple of lemons and a few herbs in the cavity is a nice touch, but no stuffing. You need to let that heat circulate.

Jonny recommends brining the turkey overnight prior to roasting. That’s fine if you’re car camping or staging at home on Wednesday night. But if you’re a little farther afield, say on a 21-day Grand Canyon trip, you can skip the brine. One advantage of the rotisserie method is it keeps the juices in the bird, rather than dripping into an oven-roasting pan. Either way, your turkey is going to be delicious.

Now it’s time to put the bird on the spit and secure it with the metal forks that come with the rotisserie kit. The key here is balance. You want to keep the weight as evenly distributed around as the spit possible. This is especially important with larger birds, as any imbalance can strain the little D-Cell motor.

Once you have the turkey centered, truss its legs and wings with butcher’s twine. There’s probably a technique for this (actually there is) but if you never made it to culinary school just make sure the wings and legs are wrapped up good and tight.

You’re going to need a lot of stuff you don’t normally bring camping. Leather work gloves, butcher’s twine, spare D-Cell batteries, a meat thermometer. Do not forget your meat thermometer. Bring a pair of pliers to torque down the thumbscrews on the metal forks that hold the bird in place, so they won’t slip when the going gets greasy. Leave the hammer at home. A piece of split firewood works great to whack the steel rotisserie supports into the ground without mushrooming the tops.

All of my grandmother’s recipes ended with the same three words: “Cook until done.” She assumed everyone had a certain level of cooking knowledge, or at least common sense, and I’m not exactly holding your hand here either. If you’re ready to commit to an outdoor Thanksgiving, you already know how to tend a cooking fire, and can probably figure out how to set up the skewer. Maybe you even know the “juices run clear” test to know when the turkey is ready. I wouldn’t trust myself to do that, so I rely on a clock and a meat thermometer.

A 12-pound turkey should take about two hours or a little more. That 18-pounder took three. If the skin starts to burn, the fire’s too hot. If it doesn’t brown, it’s not hot enough. When the thermometer inserted into the drumstick reads 165 degrees Fahrenheit, it’s time to take the turkey off the fire. Let it rest for 15 minutes and carve away.

The Rest of It

It’s not Thanksgiving without the sides, right? The key here is preparation, delegation, and Dutch ovens. First, as our friends Megan and Michael at Fresh Off the Grid remind us in their excellent Thanksgiving tipsheet prep everything you can at home. Next, don’t try to host a backcountry Thanksgiving. It’s a collaborative affair. Let everyone take responsibility for a favorite dish, and remember that anything you’d do on your home range can be done on a two-burner Coleman campstove. Mashed potatoes: use the Coleman. Gravy: Same, just don’t count on any pan drippings. Cranberry sauce: put a can opener on that packing list.

You can make a passable stuffing on the stove (hello, Stovetop) but it’s a natural for a Dutch oven. The folks at Good-to-Go have a fantastic Dutchie recipe for sausage and sage stuffing, part of a full campfire Thanksgiving menu that includes green bean casserole and sweet potato recipes adapted for the stove or grill. But if you have enough Dutch ovens in your network (and space to haul them to your chosen venue) save one for the sweet potatoes and another for Megan and Michael’s apple cobbler.

The best bread variations you should try when visiting Saigon Vietnam

This North Cascades Cabin within the Clouds is First Hiked, First Served