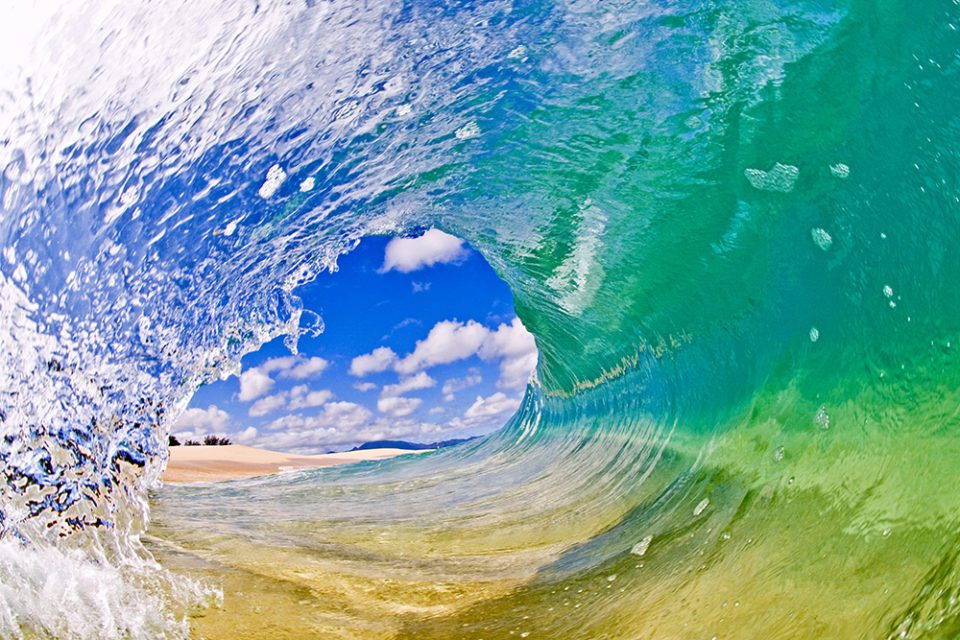 My decidedly non-scientific take is the forces of a powerful ocean wave breaking in shallow water are similar to a tornado or a hurricane—incredible force and violence swirling around a still, safe, even quiet zone. At least that’s how it feels inside the tube. Especially one that’s bigger than you’re comfortable riding. The moment a wave’s lip heaves over your head there’s a split second of eerie silence, then echoing crash of the water slamming the trough next to you—but all that power and fury is erupting on the other side of the water curtain. As long as you stay inside the tube, it doesn’t matter what else the wave is doing outside the tube—you’re good. The eye of the storm, as it were.

Clark Little has spent more time inside scary breaking waves than anyone else on the planet, surely. He makes his living standing in shin-deep water while ferocious shorebreak whirls and whorls over his head, his hand defiantly thrusting a camera into the midst of maelstrom. The photos he produces are incredible.

Little, the brother of the late big-wave star Brock Little, grew up on the North Shore of Hawaii, home to some of the most beautiful, but terrifying waves in the world. Not the ones most surfers ride, either. Waves like Waimea Shorebreak, the hellacious shallow-water explosion that surges onto the sand after the swells have broken outside on the famed big-wave reef called Waimea. Even nastier, and arguably more dangerous as it’s a short stroll from the famed Pipeline, and therefore thronged with tourists, is Ke Iki, with its triple-lipped horror show of a wave.

Incredible because he doesn’t like big waves. Is terrified of them. His brother was one of the best big-wave surfers in history, but Clark wasn’t into it. He didn’t like the idea of being tumbled in deep water, where big-big waves break. Can’t blame him, as it feels bottomless and horrifying being pushed into the black by house-sized waves. But being pounded by waves when he could push off the shallow bottom? That’s fine by him.

Little just stands in there and takes it. Lets several metric tons of water fall on him, all for the shot. Incredible, since apparently he got into this just to save some money on art for his house. His wife brought home a photo she bought at a department store one day. A big framed photo of a wave. Little, a lifelong surfer, looked at the photo and said, basically, just return it. I’ll go take a better one. At the time he was working as a landscaper. A handful of years later, he was being flown to Dubai to meet the crown prince, a huge fan of Little’s photos and one of his two million Instagram followers. Little isn’t landscaping anymore, you might have guessed.

He has a new book out. Clark Little: The Art of Waves. It’s a coffee table kinda deal, with a foreword by Kelly Slater, quite possible the only person who’s been in the barrel as much as Little. The images below are from the book, as well as the dreams of every surfer on the planet. Not all of his shots are in soul-crushing behemoths; many of his images are of small, beautiful moments in little waves, or of sea turtles finning past. He’s in love with the sea as the following images suggest. All photos by Clark Little unless otherwise marked. Used with permission from the publisher.

Travel tip : A packing list for the ultimate camping experience

Extra Multiyear Snow Droughts Are Most likely in Our Future