During a two-week mountaineering trip many summers ago, a member of my group tripped and fell head-first off a steep switchback while descending from a peak attempt. It was the type of fall that could have resulted in a spinal cord injury, so the incident ended in a helicopter evacuation early the next morning after a sleepless night coordinating a rescue via satellite phone.

A few days later, we found out that our group member didn’t sustain any serious injuries and would fully recover. Despite the relatively benign outcome of this accident, it’s stuck in my mind and body, continuing to affect my relationship with the mountains years later. This summer, while scrambling through a boulder field after an alpine climb, I kept seeing myself catching the edge of my boot and tumbling face first into the rocks. A sense of dread takes the place of excitement before big objectives, as I imagine all the things that can go wrong.

After years of hoping the anxiety would just go away on its own, I’ve learned that cultivating a positive relationship with mountain travel requires active engagement with my fears. I need support from my climbing partners and new tools to process the emotions that complicate my climbing days. One of the best first steps in this journey has been to talk with others in the mountain community who are also dealing with changing relationships to the sports they love.

After responding to an accident, my understanding of risk immediately went from theoretical to tangible.

Kestrel Hanson Neathawk, a psychotherapist and former mountain guide, experienced deep existential anxiety after losing co-workers to the mountains while guiding on the Grand Teton in the early 2000’s. “My whole nervous system went caput,” she says, describing a foggy and confused headspace during that time. She struggled to be present in the mountains with clients, instead experiencing flashbacks to being in those same places with the people she had lost.

Erin Austin is an avid backpacker and former climber living in Montana. After losing a close friend during a climbing accident in Yosemite, Austin stopped climbing altogether. While it was important for her to still spend time in the mountains, after her friend’s death she prioritized the healing aspects of being in nature and avoided hikes with lots of exposure or scrambling. A Bay Area resident at the time of the accident, Erin says the granite faces of the nearby Sierra mountains were difficult for her to be around, as they were reminiscent of Yosemite Valley’s walls.

Anxiety in the mountains can creep in without a significant event as its trigger. Richelle Kimble, an avid skier and climber living in Cashmere, Washington, became overwhelmed with anxiety while approaching a ski descent in whiteout conditions. “For me, anxiety often comes in the form of static in my mind,” she says, describing the noise made by an old television set. “My brain turns to that static channel, I become paralyzed, my breath becomes shorter. I zero in on something in front of me visually; it becomes this sort of warped focal point.” Kimble attributes her increased anxiety to growing older and having a greater understanding of risk.

After responding to an accident, my understanding of risk immediately went from theoretical to tangible. When I pack my satellite communication device and first aid kit for a climb, I’m not just doing what I’ve been taught; I’m preparing to use them if needed. The same was true for Austin after her friend’s death. When her partner goes into the backcountry without her, they establish a clear timeline for expected return, how late is too late, and when she should activate search and rescue. She’s also aware of her boundaries when traveling with a group in the mountains and doesn’t hesitate to speak up or turn around when the group is pushing beyond her risk acceptance.

Khadijah Tividad, a skier living in Tacoma Washington, had to totally reevaluate her mountain goals after a car accident damaged her spine. “Tuning my head out and listening to my body was the hardest first step in redefining my relationship with the mountains,” she said. She described feeling dissociated from her body as she tried to push herself physically to ski, despite being in a lot of pain after her accident. A few years later, she says the recovery process made the risks she faces in the mountains feel more real. She is more intentional when choosing her backcountry partners and takes greater responsibility for herself.

For Colin Cowles, a skier and former ski patroller, experiencing the recovery process from a serious accident has also curbed his risk acceptance. While patrolling in Park City in 2013, Colin was hit by a snow-making machine that shattered his face. He had his last reconstructive surgery this year, eight years after the accident. Formerly an avid mountain biker, Cowles witnessed and responded to a friend’s accident during a ride a couple years ago. After going through so many surgeries himself, he knew firsthand what his friend’s recovery process would require. Soon after,, Cowles sold his mountain bike. He just stopped having fun, and pushing his limits on a bike no longer felt worth it.

Dealing with a shifting relationship with the mountains can be challenging, especially if a sense of self is wrapped up in the sport. Becca Meier, a climber and mental health clinician living inWyoming, completed her MSW research on female climbers with mental illness. One of the biggest patterns she saw in climbers who had experienced trauma within the sport was an inner battle with identity. After being immersed in the climbing community, an accident within the sport can leave someone questioning “without climbing, who am I?”

Meier was inspired by the participants’ abilities to adapt their relationship with climbing based on their needs. “Sometimes climbing is the answer that day,” she says, “and sometimes making the decision that climbing is not the answer that day is just as important.” Climbing has been an instrumental tool for Becca as she’s managed her own symptoms of mental illness, but she emphasizes the importance of honoring your individual process and avoiding external expectations. She also recommends a gratitude practice that helps her stay grounded before a big objective. Before climbing Epinephrine in Red Rock Canyon, she woke up and took time to appreciate her ability to be present without her phone and to share the day with a good friend. 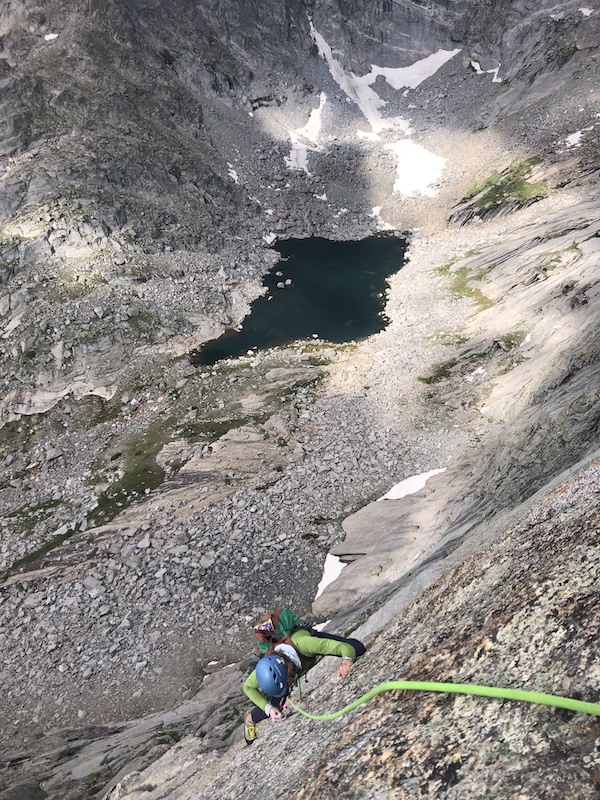 If anxiety is impacting your ability to function in the mountains, Neathawk offers up therapy as a tool. She started seeing a therapist in Jackson Hole after her anxiety became unmanageable, which inspired her to study psychology. Now a licensed clinician, she describes a technique she uses called emotional integration that allows people to release the emotional charge related to trauma or stress and bring their nervous system back to baseline. Once people learn this technique, they can apply it in and out of the therapy room, even bringing it to the mountains. “We train to climb and then we take it to the mountains. It’s the same with our minds,” says Neathawk.

Austin pursued EMDR therapy a few years after her friend’s death, which allowed her to process unresolved elements of her grief, trauma, and guilt. As an unexpected byproduct of the therapy, she was interested in and emotionally capable of visiting a climbing gym again. While she’s not interested in regularly continuing to climb, she described the experience as emotional but incredibly cathartic. While working at a grief center, Austin also learned that bilateral activities are one of the best ways to support the brain after trauma, so hiking and walking outside have been a big part of her healing process. Soon after her friend’s death, she and her partner moved out of the Bay Area, which she described as too fast-paced to hold space for the profound loss she had experienced. Feeling a need for vast, open spaces, they ended up moving to Missoula..

Neathawk and Meier are both mental health clinicians for the Climbing Grief Fund (CGF), an initiative through the American Alpine Club to assist the mountain community in dealing with grief and trauma. Recognizing that therapeutic practices can take many forms, CGF offers grant funding for things ranging from traditional talk therapy to grief writing workshops or even expeditions. The Grief Fund has also put together a network of clinicians who are also part of the mountain community. When Meier first went to therapy after her climbing accident, her therapist asked her “why don’t you just stop [climbing?]” When your clinician understands the context of your lifestyle and sport, it can be incredibly beneficial to the therapeutic process. 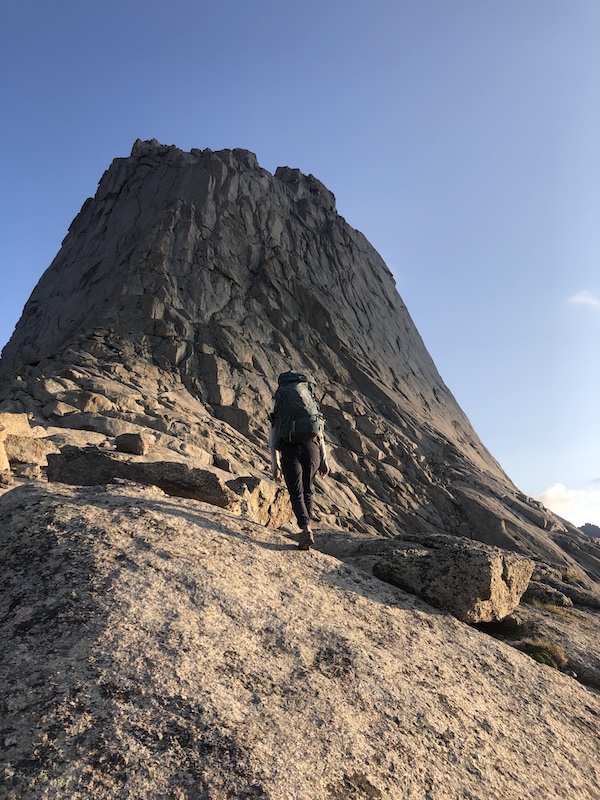 Tividad found that having to re-learn how to move her body after her accident forced her to slow down and spend time on the lower mountain. She ended up acting in a mentorship role for newer skiers, which she came to appreciate. Watching kids and adults learn to ski allowed her the space to be less competitive and softer with herself as she healed. She’s become more community oriented in her skiing, wanting to help others feel more comfortable outside or interested in learning about snow science.

Kimble says similarly that “I see the value of these mountain trips more in the time that I’m spending with the people I care about, verses a successful ascent.” Her anxiety is curbed by spending time in the mountains with people she can really trust and share her comfort levels. She also doesn’t think the goal is to eliminate anxiety, but address the underlying issues it is signaling. Cowles emphasizes the importance of the people he’s with in the mountains as well, saying he did lose some friends after he stopped mountain biking. He realizes these were one dimensional friendships and now places higher value on relationships that involve more than just the shared sport.

Much of Neathawk and Meier’s advice has resonated for me as I’ve become more intentional about how I engage with the mountains. This summer I made plans to climb a long, committing alpine route in the Wind River Range, but I felt the internal knot of anxiety forming the closer I got to the trip. I shifted my plans, chose a shorter route that allowed an easier exit strategy if conditions deteriorated, and I communicated my anxieties to my climbing partner. Honoring my feelings and choosing the climb that was healthy for me that day allowed me to find deep joy in the mountains again.

The mountain community is starting to normalize anxiety, trauma, and recovery within its sports. Meier says that people are realizing that relying on mental toughness alone leads to unhealthy coping mechanisms and the most important thing is to bring these issues to the surface. “We feel the way we feel,” she says. “Once we name it, and we’re not shameful about it, we can start to try to work through it at least a little bit.”

Photos courtesy of the author

Want Your Kids to Love the Outdoors? Put Them In Forest Kindergarten

Board of Directors Feature: Maria Betancourt