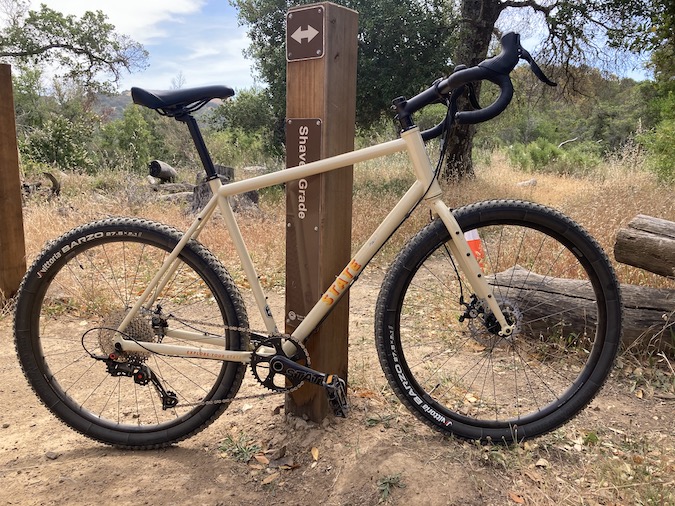 Feels like it wasn’t all that long ago, a thousand bucks would get you a pretty nice bike. Not entry level nice, but nice-nice. Those were the days, huh? Now, a bike that’s right at, or slightly below, $1,000 is going to come with a whole bunch of caveats, depending on the style of bike, of course.

And this State All-Road 4130 is no exception. But we’ll get to the caveats in a moment.

First, the basics. This is a steel frame bike with drop bars meant for riding on dirt roads. Simple. Basic. Honest. It’s not trying to do or be anything more. This bike almost feels like something a municipal bike share program would provide for gravel riding. Kinda heavy, kinda stiff, but it absolutely works and you don’t have to panic if it gets a scratch or if the paint chips.

All the components are State-branded, and, well, this is why the bike costs only $900. It has a 1×11 drivetrain that’s a collab with budget-house parts maker Sensah (shifting is excellent, by the way), an 11-42t cassette (more on this weak point in a moment) and cable-actuated brakes. You can get the bike in either 700c or 650b wheels, or both for an extra $350.

I have both the 650b and the 700c wheels, but I don’t really see the point of the big squishy 650bs on a drop bar bike, so almost all of my time in the saddle has been on the narrower, taller rubber.

Riding is fine. Good, even. The steel frame is a terrific choice here. I’m sure State considered aluminum at some point, but whatever the extra cost for steel was, it’s worth it. The bike rides smooth, feels fast at times, and is very comfortable. I’d happily put 50 miles at a time on this frame. In my many months of testing I haven’t experienced many, if any, missed shifts, regardless of how full of muck and filth the drivetrain has become. And that’s saying a lot for a sub-$1000 bike with house-brand components.

This bike has a ton of mounting points on the frame and the fork, which, in its stock configuration probably aren’t a ton of use beyond the bottle cage bosses. Well, maybe slapping a rack on there would work. But this isn’t a bike that, out of the box, I’d take on a serious bikepacking adventure, utilizing all those mounting points. In the months I’ve had the bike, I’ve had issues with the brake rotors and some random chain noise that has come and gone based on me fiddling with the angle of the derailleur hanger, to the point that I don’t know how comfortable I’d feel packing up my camping gear and pedaling deep into the wilderness. I also don’t know how capable I’d be of doing it. This bike really needs a bigger cog on the cassette to make climbing more bearable. It’s gonna be asking a lot of newbie riders to pedal this bike up sustained, steep climbs, especially when weighed down with camping gear. 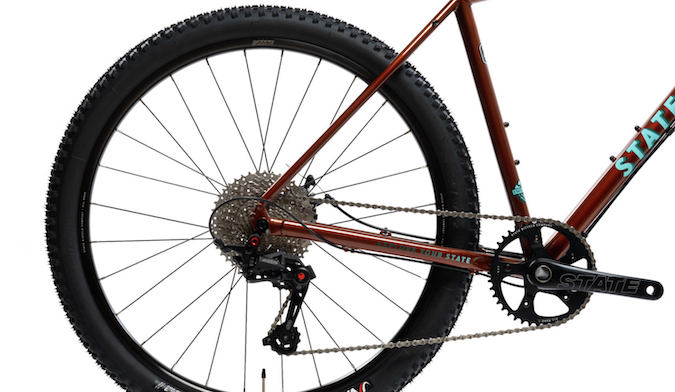 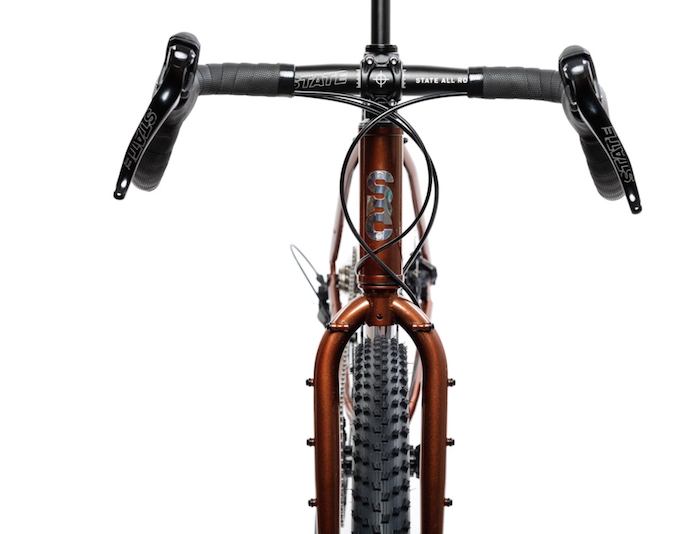 Nice tidy cockpit with slight flare to the drops.

The bike world needs way, way more budget-friendly bikes that are all about fun (that’s part of the reason I am a huge fan of Marin bikes). I really enjoyed my time pedaling this bike around the forested fire roads near home, the compliant steel frame soaking up the bumps, refusing to let ruts harsh my mellow.

Could you get a used bike for about a grand that would perform better? You could, but, you’d really have to know bikes to know what to look for. Probably not the customer State has in mind here. But I’d heartily recommend it for the gravel curious. You could happily dip your toe into the gravel waters on this rig, then keep the wonderful steel frame and start upgrading as you go. That’s what I’d recommend to anyone getting into bikes anyway. Start inexpensive, then decide if you want to go back to school to become an orthopedic surgeon to afford the highest end parts. You have plenty of time.

When I first heard about this bike, I wondered if it was a gimmick, but after riding for months, I’m impressed by what State has accomplished here.

Top things to do in Roskilde Denmark 2022

In This Yukon Bar, a Cocktail is Garnished With a Frostbitten Toe