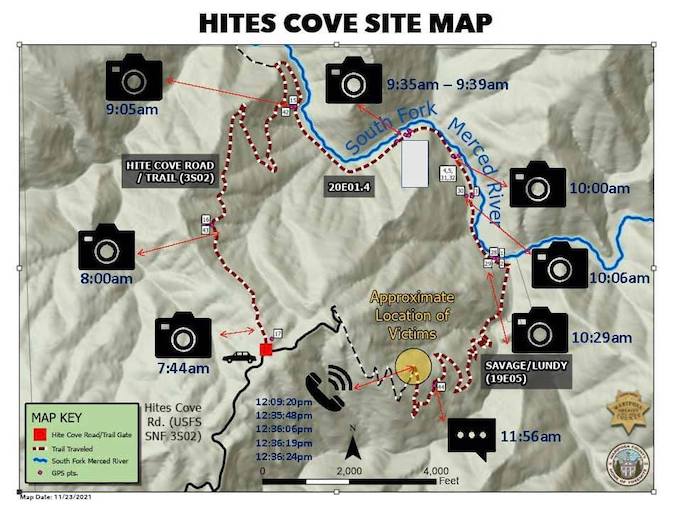 Last August, on a brutally hot summer’s day, while hiking a trail with little shade, max sun exposure, and out of drinking water, a California family perished near Hite Cove, just outside the Yosemite park boundary. Rumors immediately began swirling about what killed the family of three, a mother, father, and their one-year-old daughter (their dog also died on the hike).

In an area littered with long abandoned mines, some wondered if they’d succumbed to a toxic gas rising from deep within the mine shafts. Perhaps the warmth had caused a deadly algae bloom in the Merced River and the family had previously swam or drank from the river, were sickened, and died on their hike? Part of the trail they died on runs alongside the Merced River, and samples of the water there contained Anatoxin A, a potentially deadly toxin produced by blue-green algae. The deaths were considered so curious, authorities closed campgrounds and trailheads near where the family’s bodies were found, so concerned were they that there was a toxic, unseen killer in the air or the water.

“Current scene information does not indicate a clear picture of what occurred or a clear cause of death,” said the Mariposa County Sheriff’s Office. “The scene is currently being handled as a hazmat and coroner investigation.”

But no evidence was found that the family drank the water. And no other evidence presented itself, after authorities considered murder, suicide, lightning strikes, even animal attacks. Finally, the most obvious cause was arrived in October at as the likely killer: Hyperthermia. Heat exhaustion.

Temperatures were in the pleasant low 70s when the family embarked on their hike, but reached a boiling 109 degrees by the time they approached the steepest section of the trail. Fires in recent years had vaporized trees that would have otherwise offered shade.

The Mariposa Sheriff however, waited until cell phone records had been retrieved to make their final update on the case.

That happened last Friday, the 17th, when the Sheriff department confirmed the family had texted and called for help.

At 11:56 am, roughly four hours after they began their hike, and an hour after they’d taken their last family photo, they texted an undisclosed phone number: “{name redacted} can you help us. On savage lundy trail heading back to Hites cove trail. No water or ver (over) heating with baby.”

The family then called several phone numbers a total of five times, none of which were 911. But none of the calls or texts were delivered as there is no cell service in the area.

“The cell phone data results were the last thing both the family and detectives were waiting on,” Sheriff Jeremy Briese said. “The extracted information confirms our initial findings. I am very proud of my team and our partner agencies for all the work they put in. Their dedication has allowed us to close this case and answer lingering questions the family had, bringing them a little peace.”

Why the Trees Are Marching Northward

Will Climate Change Make Skiing Even More Expensive and Exclusive?