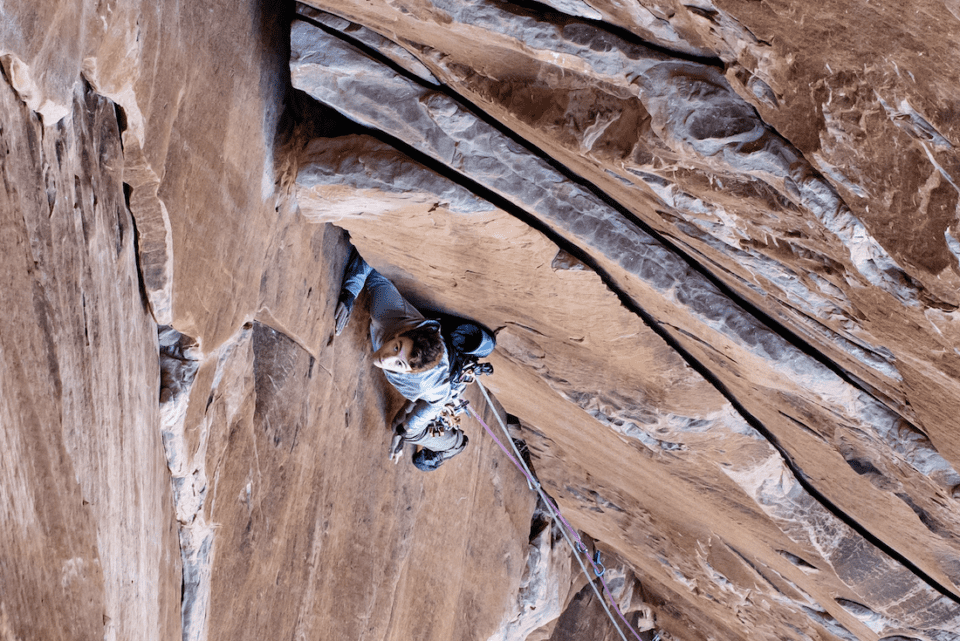 Off-width climbing is antithetical to not only the sexiness of climbing, but the sexiness of almost all adventure sports. It is less the balletic and gymnastic movements you imagine yourself doing between small hand- and footholds on an aesthetic rock face, and more like moving a couch up six tightly-arranged flights of stairs on a hot July afternoon, or removing and replacing a basement water heater with a friend.

In off-width, the crack is too large to climb by jamming your fists, hands, or fingers in it, too narrow to climb by slipping your whole body inside and chimneying up with opposing pressure. Instead, you grovel. You cram one side of your body into the crack-one leg with your foot in whatever position will give it maximum friction, one arm either bent into a chicken wing or straight out in an arm-bar, palm against one side of the crack, elbow pushing against the other side-and you start to shuffle yourself up. You grunt, heave, whimper, thrutch, curse, sweat, and pant-almost like having sex, without the fun, nudity, and attractive partner. Wise off-width mentors will tell you an inch or two of upward progress at a time is good. “Best 5.7 offwidth in North America,” according to photographer Laurel Fan/Flickr

There is a twisted sort of pride in climbing off-widths. Even more twisted is the badge of honor that comes from exerting yourself so much that you become nauseous and dry-heave or vomit during or after climbing. You don’t train for off-widths by using hangboards, campus boards, or other forearm-intensive rock climbing training/torture devices-you do sit-ups.

True: There are a small handful of people who somehow manage to make it a little more sexy, or at least entertaining, like Pamela Shanti Pack, or Tom Randall and Pete Whittaker in the film Wide Boyz. The rest of us, however, are reduced to brutes, and probably as film-festival-clip worthy in our performances as someone trying to push a wheelbarrow full of bricks through a mud bog.

But you know what? That doesn’t mean it’s not fun. And fun is sometimes ineffable, unattractive, and hard to explain to strangers, or, really, anyone who hasn’t done it themselves at least once. But hey, to the untrained and inexperienced bystander, CrossFit probably doesn’t make a lot of sense, and look at how many people are having fun with that now.