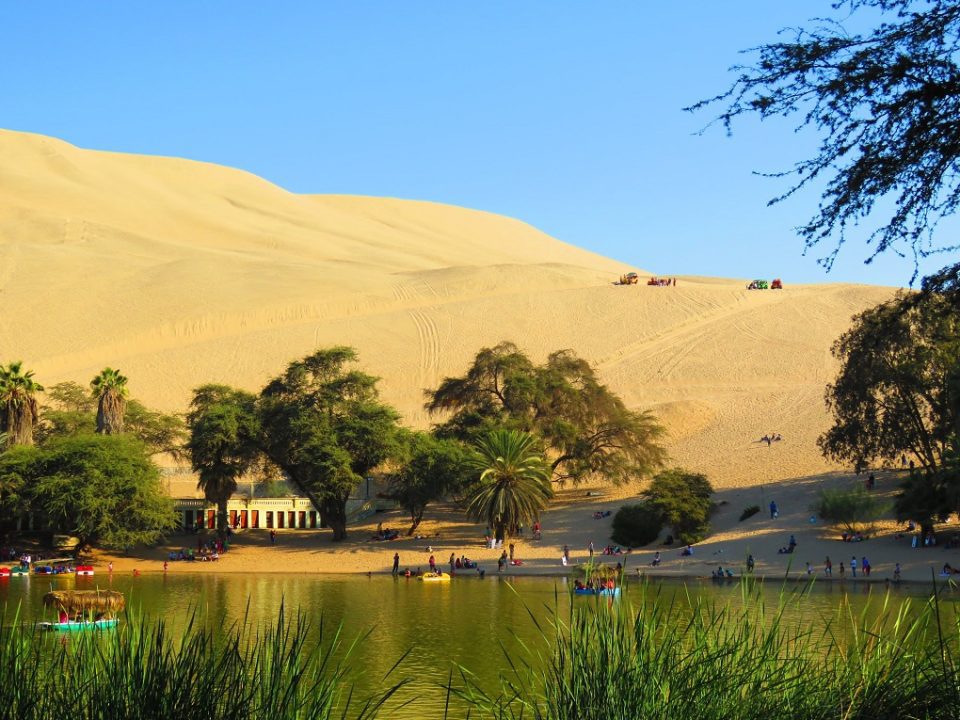 In the middle of the most arid desert in Peru, there is a beautiful oasis of Huacachina with rows of green palms, spreading leaves, luxuriant foliage, and a still lake. If you walk in the sultry sun of the desert for too long, you may have the illusion of blue lakes under the shade of palm – a scene that hardly exists in the middle of a giant sandy sea. However, this “illusion” is completely true among the sand dunes of southwestern Peru.

Located 4 km from the coastal city of Ica, the Huacachina oasis appears as a surreal place only in the movie. While glittering like an illusion, the El Cascajo lake in this oasis actually formed from the desert’s underground water. In particular, this place has become a destination for those who want to try thrills with sand sports in the desert or terrain vehicle on the dunes tens of meters high. Although there are only about 100 residents, Huacachina welcomes tens of thousands of visitors each year. The news of this green oasis in the desert only began to spread as far back as the 1940, when a wealthy spa claimed that water in the Huacachina lagoon could cure illnesses. However, by the 1950, Huacachina suddenly faded and abandoned for decades later.

Until the 1990, curious tourists flocked to this beautiful oasis. Tour companies started organizing terrain driving, sandboarding … to attract adventurous people to experience. Since then, enjoying the fanciful beauty of the Huacachina oasis has become the wish of many traveling lovers around the world. 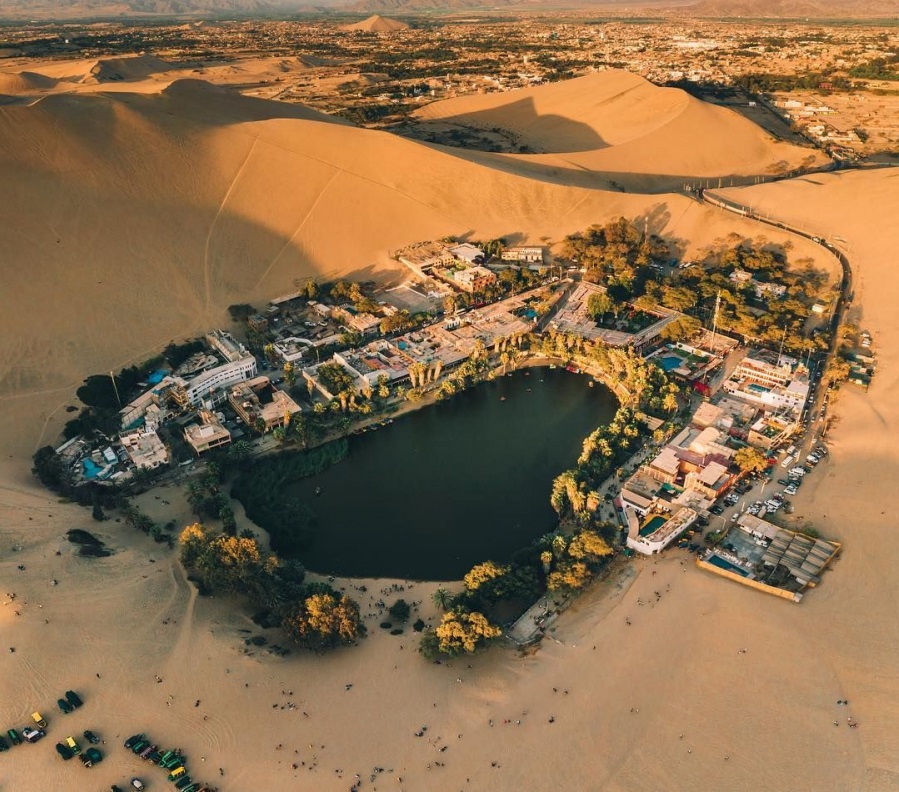 Today visitors to the Huacachina Oasis can take a boat ride on the lake in the middle of the oasis, ride a terrain vehicle to explore the surrounding sand dunes for $50 per hour, sandboard, or watch the sunset from the sa Desert. If you want to relax, visitors can rent a room in the village or camp in adventure areas.

Basically, the Huacachina Oasis is a collection of resorts with lovely palm forests and clear blue lakes and sand dunes. The estimated number of tourists coming to Huacachina is much larger than the region’s population. Almost anyone who comes to the Huacachina oasis will be amazed at the amazing scenery here. To dispel the heat in the desert, people have covered endless sand dunes a green asparagus in terrain that can be used as agricultural land.

How to get to Huacachina 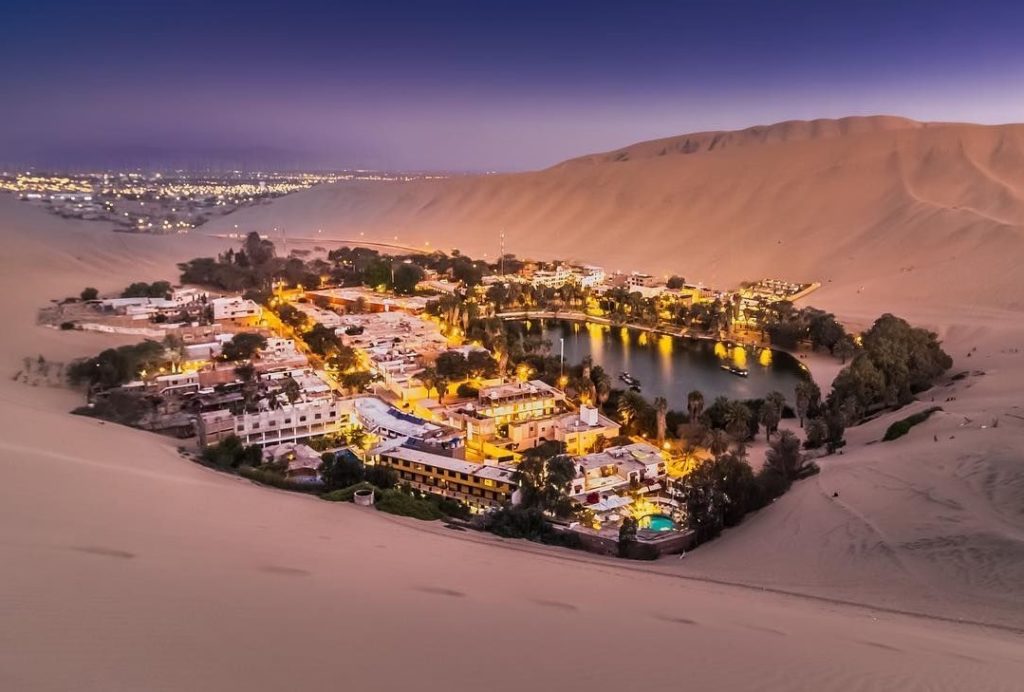 It takes only 10 minutes by car from the city of Ica in southern Peru to Huacachina, but it will take about five hours by car if you depart from Lima. On weekends, people of Lima capital and tourists flock to Huacachina. 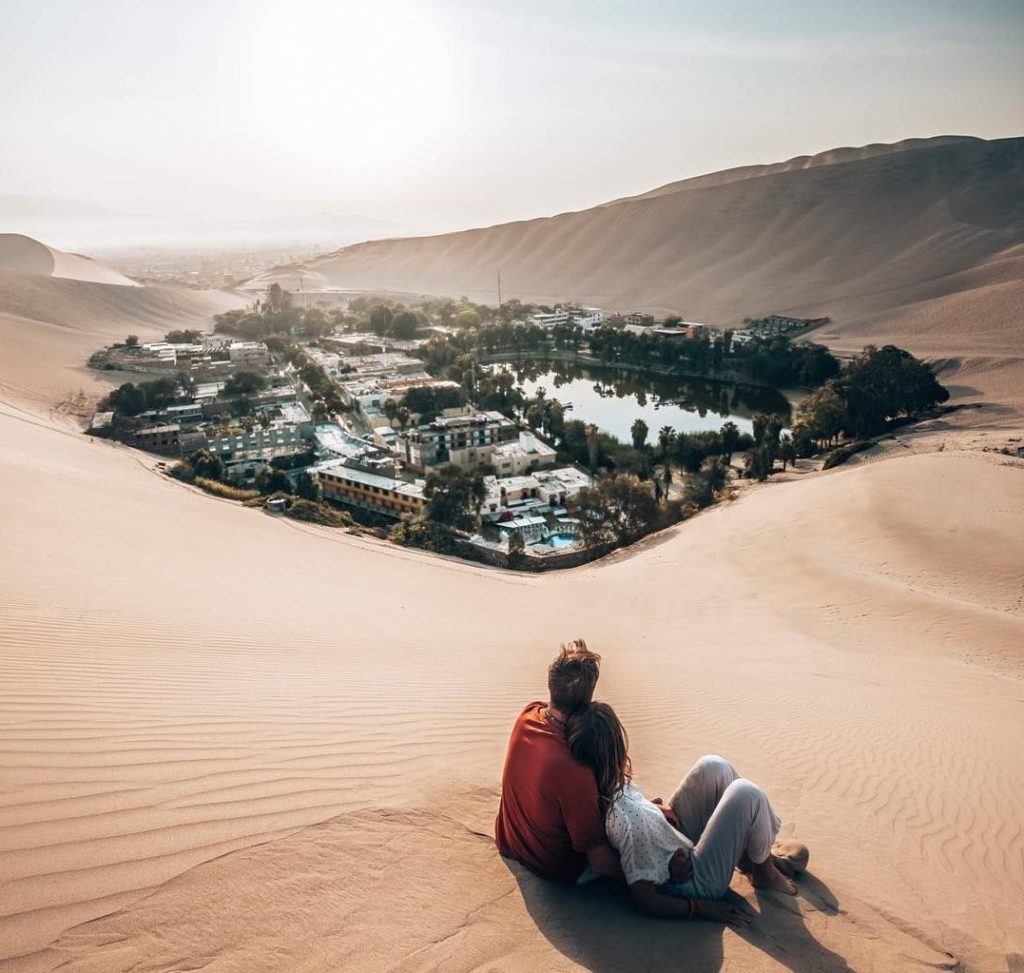 The palm tree-lined path along the green lagoon in the middle of the village is where visitors can save the best views. One of the busiest activities here is exploring the desert by convertible and sliding from the towering sand dunes. Hotels or tourist offices in Huacachina offer this journey for about 20 USD / 2 hours.

What to do in Huacachina

With the type of convertible, visitors will have the same experience of playing the roller coaster in the air. Local drivers will fly over the sand dunes at breakneck speed and you’ll have to scream excitedly when the car goes up high, you go down low, or when the car runs every turn …
The car will stop several times for tourists to take photos and play sandboarding as instructed by the driver. To avoid heat, you can choose a journey that starts at 16h and ends at 18h. 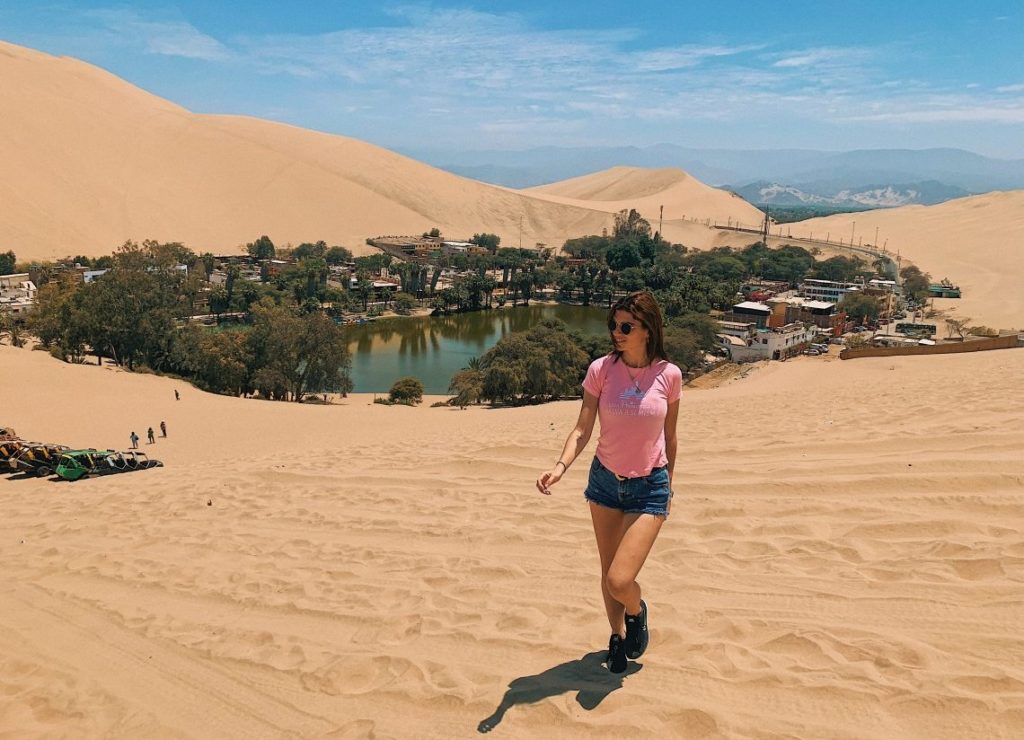 You can also rent a water bike to enjoy the cool breeze between the desert from the green lagoon. According to local legend, every year there is a mermaid living in the lagoon will … pull a man’s foot. Therefore, a statue was erected so that the indigenous people would occasionally make offerings to the mermaid. In fact, some young Peruvian people have lost their lives in this lagoon by jumping into a bath drunkenly! 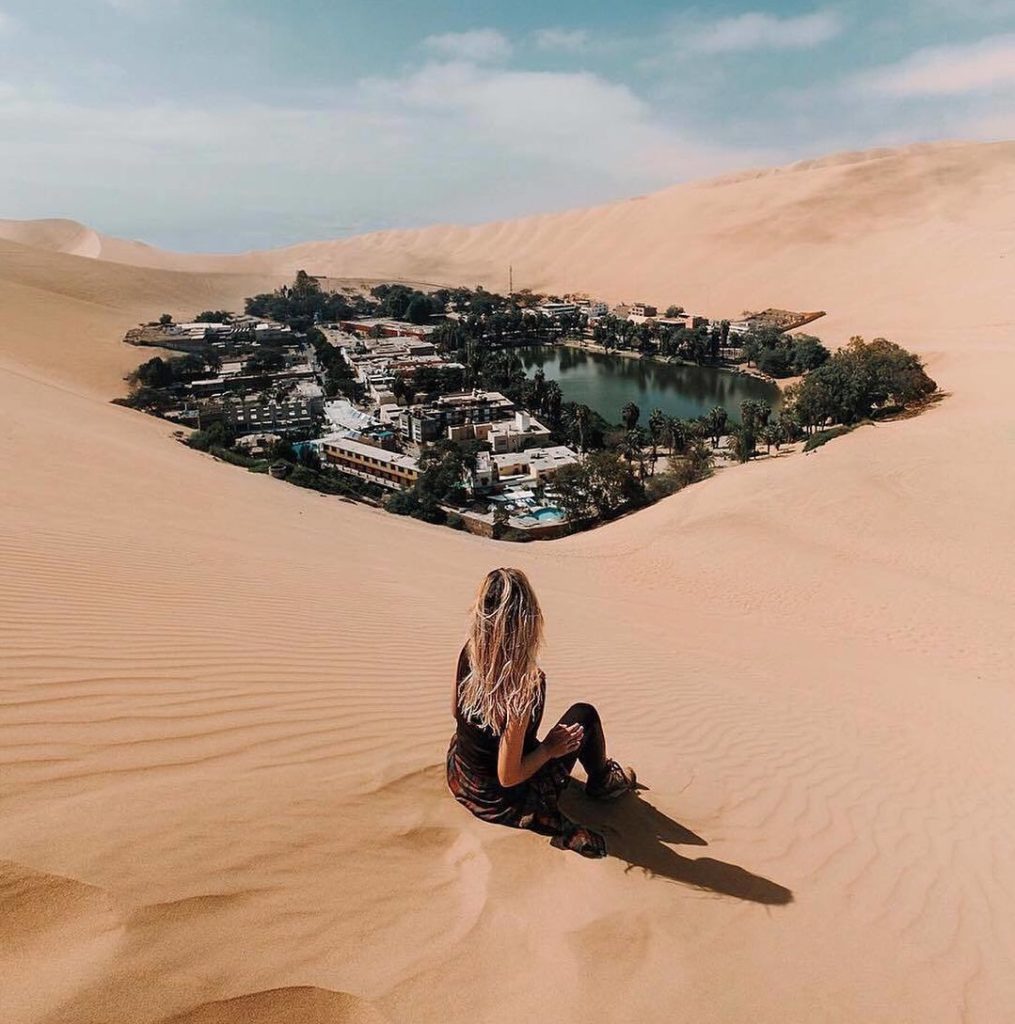 And before you leave Huacachina, do not forget to record the romantic sunset image in Huacachina from the top of the sand dunes or even from the hotel window here ..

According to ancient legend, Huacay China, a beautiful girl in the area, was bathing in a lake when she was discovered by a young hunter. Mrs. Huacay ran away when she saw a stranger in the mirror. The mirror shattered into a lagoon, a long flap fluttered, leaving behind the giant sand dunes surrounding. The girl then dives into deep water to hide strangers. 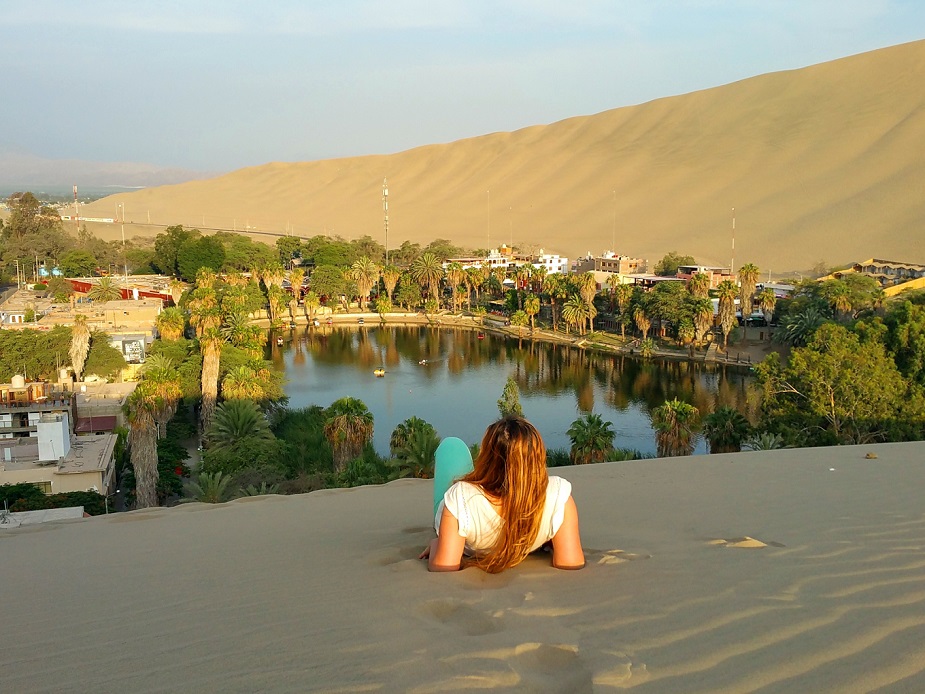 People rumors that Huacay still lived in Huacachina oasis and turned into a mermaid. In fact, the El Cascajo lake in this oasis is made up of a desert aquifer.

By the early 2000, rampant well-digging threatened Huacachina’s water. To compensate for this loss and preserve the heritage, local businesses began pumping water into the lake. However, the lake in the oasis is increasingly polluted due to the surrounding infrastructure.

For your huacachina tour , you can view more with this video (from youtube) :

Since 2010, Marino Morikawa, a Japanese-Peruvian scientist, has successfully studied nanotechnology to revive Huacachina’s El Cascajo – where he spent his childhood fishing.

For 6 months, Marino developed a micro-nano foam system and biofilter to clean the entire lagoon area of ​​the oasis. By 2014, after the efforts of Marino and his colleagues, 40 species of birds had migrated to El Cascajo, 10 species of fish spawned back in the lake.

The best places to visit Taiwan in 2023