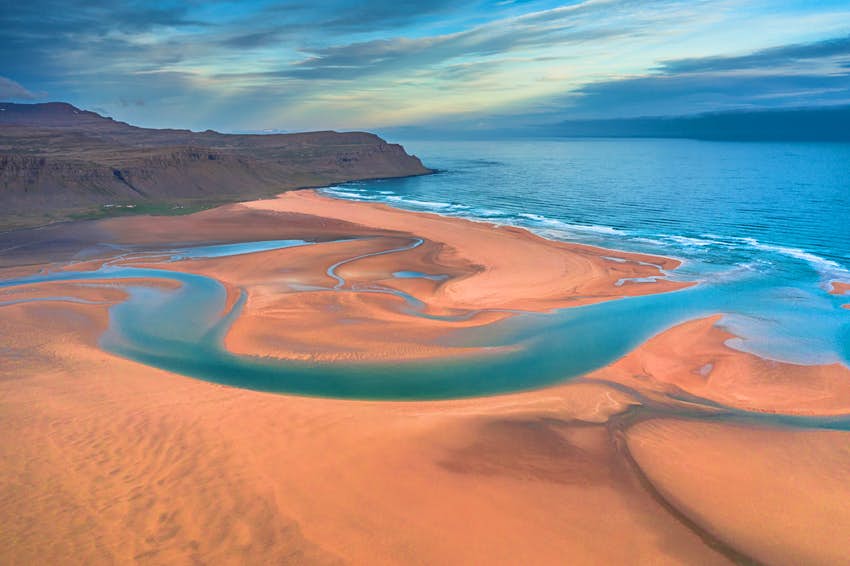 The people of Northwestern Iceland – known as Vestfirðingar – have over the years threatened to secede from the rest of Iceland by establishing the Democratic Republic of the Westfjords. It is, thankfully, a joke, but it’s telling: the massive northernmost peninsula, home to only 7,000 people, does feel like a land of its own.

On a map of Iceland, the Westfjords region is already in juxtaposition – the coastline appears to be drawn with a shaky hand, shaped by fjord after fjord after fjord, the Nordic word for narrow inlets with deep sea and steep mountains. The difference has to do with geological age. The land is Iceland’s oldest and resembles that of neighboring Greenland in many ways.

The natural curves make driving full of twists and turns. Consider this for scale: the region itself is merely one-fifth of Iceland’s size but its circular drive covers two-thirds the length of Iceland’s famous ‘Ring Road’ – some 950km (590 miles) altogether, known as Vestfjarðaleiðin or the Westfjords Way.

Thanks to a series of road-tunnels completed in recent years, the circle is now accessible year-round, with all its under-explored landscape and small-town spirit. Over the years a small but steady number of travelers have ventured into this wild landscape, and we’re taking note – the Westfjords are part of Lonely Planet’s Best In Travel for 2022. Here are six highlights along the Westfjords Way.

By some standards, the beach of Rauðasandur exists on the wrong latitude. If it was located, say, 20 degrees further south on the globe, colorful towels and sun-umbrellas would line the 10km (6 mile) beach of reddish sand that is uniquely tropical-looking for Iceland.

The sandy color comes from pulverized scallop shells, concentrated in a cove sheltered by steep cliffs. Sunbathing in flip-flops is possible on a bright summer day but most visitors come wearing walking shoes; the area is excellent for long and short hikes.

To get there, take Route 614 from Patreksfjord; the steep and narrow drive is an experience itself. And please enjoy the view, without feeling lost: from above the beach may not look red at all – the sun often makes it seem yellow or even black.

Westfjord’s best-known site, the Dynjandi Waterfall is in fact a cascade of six falls. But the grand and picturesque Fjallfoss on top tends to steal the limelight from its smaller siblings below, worth checking out as you walk the path up to the main vista.

Dynjandi is neither powerful nor tall by Icelandic waterfall standards – and that makes its popularity even more special. Many seasoned travelers regard it as a favorite and one reason may be proximity. The water spreads wide without a splash, allowing visitors to get close without soaking in spray. It is immersive and overwhelming, but watching the water crawl down the cliffs is also soothing and calm.

What does an Icelandic community do when pure luck brings the discovery of geothermal water? Naturally, they build outdoor hot tubs – the Drangsnes pots by the sea – and a swimming pool with an end-of-the-world vibe at Krossnes. These two fine establishments reward the far-traveler on the long route known as the Strandir Coast.

The area extends from Drangsnes to Norðurfjörður on a 100km gravel road, passing abandoned herring factories and beaches full of driftwood. The entire region has just about 150 residents but thanks to them the road is serviced year-round. (Drivers may still need a 4×4 over winter. Visit SafeTravel.is for up-to-date road conditions.)

The bird life is excellent. From June to August, puffin tours take off from Drangsnes to an offshore colony named Grímsey and as the road extends north it becomes harder to avoid being attacked by an arctic tern. Distract them by holding up a stick.

Cycling tours from Þingeyri and Ísafjörður

Cycling is a fast-growing travel trend on the Westfjords, thanks to quiet roads and incredible tracks.

The village of Þingeyri is a starting point for a stunning ride along the steep cliffs of Dýrafjord. For a pleasant four-hour trip, head to the orange lighthouse at Svalvogar; the 40km trip is strenuous, but on reasonably even ground. Experienced cyclists can loop the peninsula from Þingeyri in about 6 to 8 hours. Bikes are available for rent at the coffeehouse Simbahöllin, starting at 12500 ISK (about $95 USD).

Ísafjörður, the regional capital, is home to many mountain bike enthusiasts who have created paths for all levels of fitness. Local tour agency Borea Adventures offers guided tours several times a week; for those in shape for six hours of cycling we recommend the “fjord hopping” tour crossing mountains over to Bolungarvík.

Spot a sea monster at Bíldudalur

Welcome to Bíldudalur, the sea-monster capital of Iceland. No other place has clocked as many freaky creatures spying from sea and occasionally crawling on land. The shapeshifting Nykur, for instance, looks like a gray horse but the hooves face backwards. Check before jumping on an Icelandic horse.

The visual Sea Monster Museum, located in an old warehouse by the harbor in Bíldudalur, goes beyond folkloric anecdotes by giving visitors a sense of how these stories came to be. Ocean and isolation have historically defined life in the Westfjords and the wacky creatures portrayed in the museum translate that reality into a vivid story.

Sail or paddle the Ísafjarðardjúp

The Djúpid, as the Ísafjarðardjúp is casually called, is a long inlet marking the watery borders of  inhabited and unpopulated land; on one side is the regional capital Ísafjörður and on the other  the Hornstrandir Nature Reserve without a single road.

From Ísafjörður tour operators sail to the island of Vigur, home to an incredible number of Arctic Terns and coastal birds over the summer. The island, once farmed, has a cute café and enough ground to sustain a lovely afternoon. The sailing takes an hour, usually in calm seas, as the inlet is sheltered from the open ocean.

The calm fjords make Ísafjarðardjúp especially popular for kayaking. Tours are available from Mjóifjörður and Ísafjörður and range from two hours to several days, sleeping on a remote beach somewhere in the company of seals and seabirds. People have compared the activity to attending a yoga retreat; the mind switches gear and time spools slowly, one paddle at a time. The Westfjords, if anything, are not about speed.

India to roll out e-passports for hassle-free journeys

The experiences you need to know about travelling in Ghana