I’m sitting down to write about Congress preparing to pass a new law, called the Great American Outdoors Act, that will fully fund the Land and Water Conservation Fund, and all I can think is, Didn’t we just do this?

Remember last year, before the Coronavirus and a resurgent, long overdue Civil Rights struggle took to the streets, when the crisis of the day—unprecedented then, a bit of a yawner now—was a seven-week government shutdown? Remember how ecstatic outdoor lovers were when the lobbyists for big pharma and big energy and all the rest packed up their suitcases of cash and went home, and the outdoor lobby finally got a word in with lawmakers?

“We just went into offices and acted like this was going to happen,” O’Keefe said. “And when you get enough people saying that it begins to take on its own momentum. It’s kind of like the Jedi mind trick.”

That opening led to an extraordinary breakthrough in conservation law—a sweeping bill to set aside a million acres of new wilderness, protect a million more acres of public land from future mining, and designate more than 670 miles of rivers as Wild and Scenic. When Congress finally came back to work in February 2019, legislators from both sides of the aisle sang the bill’s praises.

You Sitting Down? Huge Bipartisan Public Lands Bill May Actually Pass, we wrote, and it did. The Senate voted 92 to 8 in favor of the John D. Dingell Jr. Conservation, Management, and Recreation Act, marking “a rare victory for environmentalists at a time when the Trump administration is working aggressively to strip away protections on public lands and open them to mining and drilling,” as the New York Times put it.

It didn’t stop the Trump’s administration’s aggressive rollback of 100 environmental protections (66 completed and 34 in progress), but it did some very good things, and at the top of that list was permanently authorizing funding for the Land and Water Conservation Fund (LWCF) at $900 million per year.

The fund uses revenue from offshore oil and gas leases to support public land protection and infrastructure. At last count the LWCF has $22.3 billion set aside for everything from habitat restoration to boat ramps and city parks. It doesn’t cost taxpayers a dime, unless you get fancy and try to account for drilling infrastructure and cleanup costs, or fossil fuel subsidies in general.

The Dingell Act passed in February 2019 and President Trump signed it into law last March. So why is Congress voting as soon as next week on another piece of landmark legislation that will . . . wait for it . . . fully fund the LWCF?

The short answer is that getting money from Congress is a two-step process. One committee authorizes the funding, and another appropriates it. You don’t get one without the other, and you don’t send a $900 million pot of honey to Congress every year without some hands getting sticky.

The LWCF has been around since 1965, during which Congress has authorized the spending every year, but only appropriated a portion of the funds. In the fund’s 55-year history, lawmakers have appropriated the full amount only twice, while regularly siphoning billions for non-conservation purposes, according to the Land and Water Fund Coalition.

Case in point: After passing the Dingell Act last year, Congress appropriated only $495 million of the $900 million in LWCF funds it authorized—far short of full funding, and yet the highest amount in 15 years. In the history of the program, less than half of the accrued money has been spent on conservation. It’s as if you asked your mom to buy an ice cream cone and she said okay, but spent most of the ice cream money on Four Loko. Instead of a double scoop of Ben and Jerry’s you end up with squirt of melty soft serve.

This came as no surprise to conservation lobbyists like Tom O’Keefe, the Stewardship Director at American Whitewater. “As a policy professional working in this space, I celebrated,” he said. “But at the same time I knew the real win is to make sure that the money is actually there.” 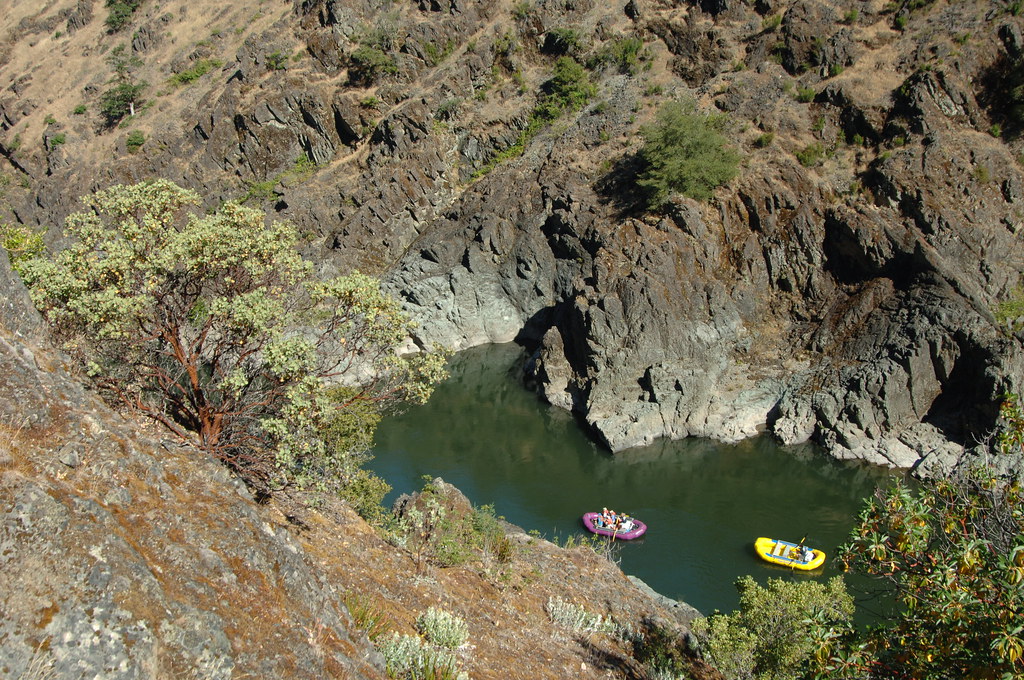 The Rogue River in Oregon’s Sikiyou National Forest. The 2019 Dingell Act classified 256 miles of the Rogue and its tributaries as Wild and Scenic. Via Flickr

That’s what the new legislation does. The Great American Outdoors Act ensures that all the money authorized—currently $900 million per year—will actually be spent on conservation, recreation, and access to public lands.

And it goes a step further, adding $1.9 billion a year for the next five years to tackle maintenance backlogs in the national parks and other public lands. That proposal was already floating around Capitol Hill as the Restore Our Parks Act (ROPA). Conservation advocates and the outdoor community worked behind the scenes to combine the two proposals and expand ROPA to include lands managed by the Forest Service, Bureau of Land Management, U.S. Dept. of Fish and Wildlife, and Bureau of Indian Education, in addition to the national parks.

Then they helped forge a bipartisan coalition headlined by Republican Sens. Cory Gardner of Colorado and Steve Daines of Montana. It’s safe to say nobody saw this coming.

“In March, Gardner and Daines went to the president and said, ‘We really could use a political victory on public lands, and we’d like your help,’” O’Keefe said. President Trump responded with a tweet saying that if Congress were to send him a bill to fully fund the Land and Water Conservation Fund, he would sign it.

“We saw the tweet and said all right—game on,” said O’Keefe.

It was reminiscent of the days before Christmas 2018, when the big-money lobbyists had gone home, leaving Congress stuck in town to deal with a budget impasse over President Trump’s border wall that would soon lead to the government shutdown. That gave conservation lobbyists and their outdoor industry partners a rare opening, and they pounced.

Our friends at Dirtbag Diaries published a wonderful podcast describing how a team of “avid kayakers, climbers, and all-around (reformed) dirtbags,” set about conjuring the Dingell Act from a contentious political cauldron. They were already working overtime to save the LWCF, and added to that conversation some 150 land-use bills that had been piling up in various Congressional dead-ends. Suddenly the “Lands Bill” became a thing.

“We just went into offices and acted like this was going to happen,” O’Keefe said. “And when you get enough people saying that it begins to take on its own momentum. It’s kind of like the Jedi mind trick.”

In March 2019 the bill became law, and the most significant public lands legislation in a generation was on the books.

But it only authorized LWCF expenditures; it didn’t require the money be spent. In fact, as The MeatEater’s Sam Lungren pointed out, before he met with Sens. Gardner and Daines in March, the president’s proposed budget for fiscal year 2021 called for reducing the LWCF appropriation by 97 percent.

In the hours after Trump tweeted his about-face, conservation lobbyists fanned out in the halls of Congress, selling Democratic and Republican members alike on the idea of a rare bipartisan win. “It’s all about finding windows of opportunity,” said O’Keefe. 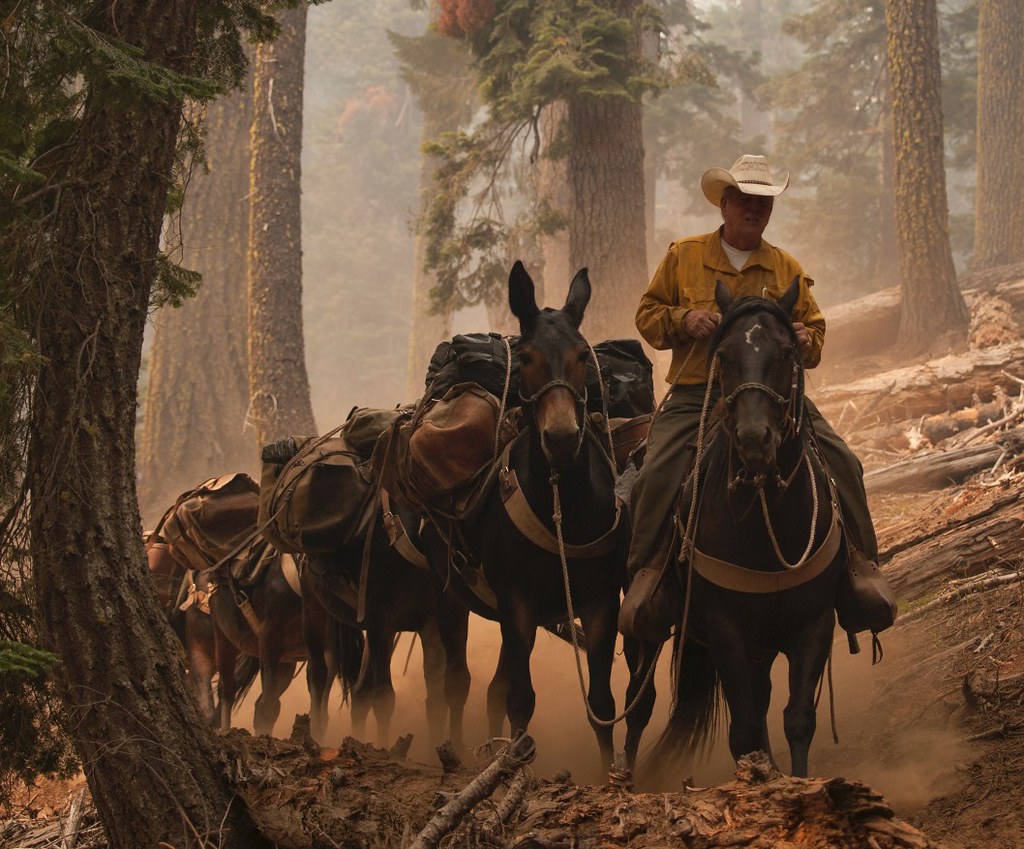 A horse packer in the Klamath National Forest. The Great American Outdoors Act will address maintenance backlogs on Forest Service, BLM and Fish and Wildlife lands, as well as the National Parks. Flickr.

Gardner and West Virginia Democrat Joe Manchin introduced the Great American Outdoor Act on March 9 and the legislation quickly gathered steam, only to run headlong into the COVID-19 crisis. Lawmakers spent the following weeks jamming trillions in bailout legislation through Congress. When they came up for air at the end of May, $900 million a year from the LWCF and a further $1.9 billion to address maintenance backlogs didn’t sound like much in comparison. Stimulus spending was suddenly the order of the day, and here was a bill ready-made to inject money into popular programs in largely rural, conservative districts.

Gardner hit that note in a June 8 address on the Senate floor, backed by a poster-board photo of the Great Sand Dunes National Park and Preserve. “Now is the time to invest in our recreation infrastructure. Now is the time to invest in this job opportunity,” he said. Gardner mentioned the dunes and the nearby wetlands that sustain them—“without the water underneath it, the sand dunes just blow away”—but focused on the devastating economic effect of a shortened ski season and shuttered restaurants and hotels in mountain towns.

Recreation economics also played a big role in extending the Restore Our Parks Funding to other public lands, said O’Keefe, who made the case for National Forests to Washington Rep. Suzan DelBene on a raft on the Nooksack River last year. “I said, ‘We’re out here rafting in the national forest today. Isn’t it awesome?’ It’s interesting that you can make this kind of connection with a member of Congress and say, ‘Look at this beautiful place, and by the way, it’s in your district.”

Outdoor Alliance founder Adam Cramer is fond of saying that to influence lawmakers you can either have money, or lots of people to mobilize, or really good ideas. Money and political calculation are always in play, but it’s heartening to know that ideas still matter too, and that in our polarized country we can still sometimes find common ground in our public lands.

Stop sending these to my phone.