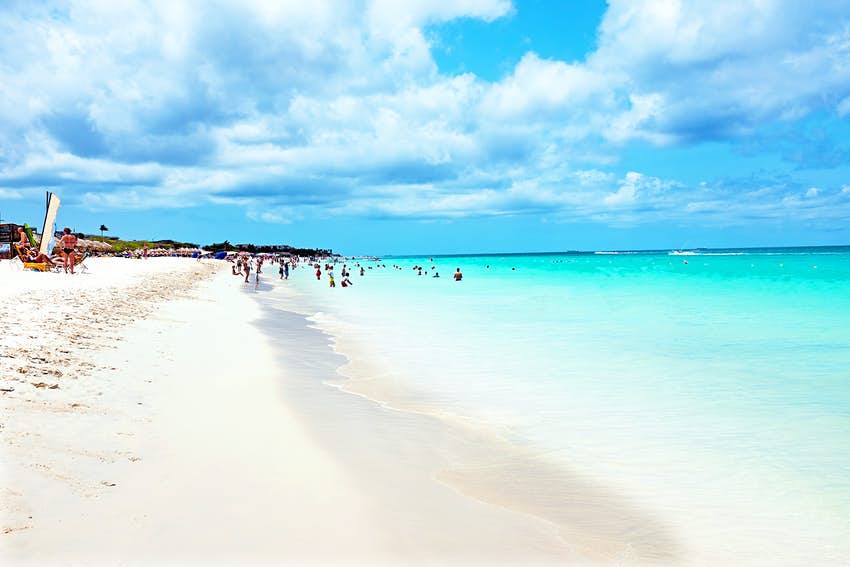 Coastal cacti collide with white sand beaches and turquoise tides in Aruba. This tiny Caribbean nation sits just 15 miles off the coast of Venezuela, but despite its proximity to South America, Aruba primarily hosts US tourists who’ve turned the island into an Westernized playground of booze cruises, ATV excursions and resorts.

That combination makes Aruba one of the best Caribbean islands to visit for US travelers who want the comforts of home in an exotic location, but your experience can vary dramatically depending on when you go.

Get trusted guidance on where to travel when – delivered straight to your inbox weekly with our email newsletter.

Unlike many Caribbean nations, weather does not play a major factor in Aruba’s peak season. Instead, the season is dependent on cold weather in North America.

Aruba’s capital city, Oranjestad, will be bustling during high season. Expect to pay top dollar for lodging, dining and experiences from mid-December to mid-April. During high season, hotels on the island’s most popular beaches, Eagle Beach and Palm Beach, can inch towards $1000 per night at the most exclusive spots. Reservations are recommended several months in advance.

Best time for a diverse crowd

The sweet spot for savings and social life occurs from late spring to late summer in Aruba. Warmer temperatures in the US and Canada mean fewer flights from North America.

Expect lodging rates to dip 20 to 30% during shoulder season, and look for a more diverse crowd of visitors, particularly Europeans taking advantage of summer vacations and South Americans flying north from their winter.

US tourists will likely still make up the majority of the crowd this time of year, but lower rates and a climate that still benefits from a daily breeze make Aruba an attractive option for a wide range of travelers no matter conditions at home.

Deep discounts on lodging, sometimes as much as 50% less than winter highs, can make Aruba a relative bargain this time of year. September can also be the best time to visit Aruba for snorkeling, thanks to lighter winds that can keep surface waves at bay.

And, though tour operators will often reduce the number of outings per week, you may find yourself in a smaller group and waiting in fewer lines than you might during peak season.

When is hurricane Season in Aruba?

The southern Caribbean is typically less threatened by Atlantic hurricanes than the northern Caribbean. Though it is possible for hurricanes to take atypical trajectories and skirt or even impact Aruba, the nation remains one of the surest bets to catch pleasant weather in the Caribbean during peak storm season – usually from early summer to fall.

The highlight of high season, Carnival brings parades and revelry to the streets of Oranjestad and San Nicolas. Enjoy vivid costumes and copious calypso as people from across the 70-mile long island come together to celebrate. Carnival’s crown jewel? The Tivoli Lighting Parade, where twinkling lights shimmer from floats and costumes through the tropical night.

Aruba commemorates its flag day on March 18 with fireworks displays across the island. Often, the day coincides with folklore presentations and constant, joyous singing of the national anthem from local children.

Aruba’s annual Soul Beach Music Festival dials beach parties and nightclubs in Palm Beach and Oranjestad up for a celebration of music and comedy that is regularly rated as one of the Caribbean’s best music festivals. It’s common for international artists — like DJ Jazzy Jeff and Chaka Khan —  to make their presence felt. Soul Beach Music Festival sometimes coincides with the three-day Aruba Food & Wine Festival.

Bonfires abound in June, when Arubans gather to commemorate Dera Gai. Anglicized as St. John’s Day, this festival of storytelling and music is authentically Aruban. Historically, local men challenged each other to jump over the bonfires while also playing a sort of of blindfolded hide-and-seek with a half-buried rooster. Today, it’s mostly a reason to celebrate and symbolically cleanse the soul. The roosters are no longer real.

Wind- and kite-surfers descend on the island from around the world to compete in a contest powered by the trade winds. Typically, the Hi-Winds Tournament takes place within sight of the opulent resorts of Palm Beach and makes for excellent people-watching.

Grabbing an American meal Aruba is surprisingly easy, but those who dine on island time without sampling the local culinary heritage are missing out. Aruba is an island home to more than 90 different ethnic groups where it’s common for children to speak as many as four languages. Its food – the centerpiece of Aruba Restaurant Week – blends South American, European and Caribbean flavors into unforgettable flavors.

Far from the buttoned-up stands of Wimbledon, Aruba’s beach tennis championships replace racquets with paddles and polos for board shorts and bikini bottoms. Each November, the Aruba Beach Tennis Open combines serves and sand into a casual sporty atmosphere. In the background, the colorful sails of the island’s catamaran regatta might be spotted billowing on the returning trade winds.

Traditionally, Sint Nicolaas arrives in Oranjestad’s Paardenbaai Harbor on December 5, much to the joy of local children. Later in the month, Aruba celebrates its New Year and the coming of Carnival festivities in January.