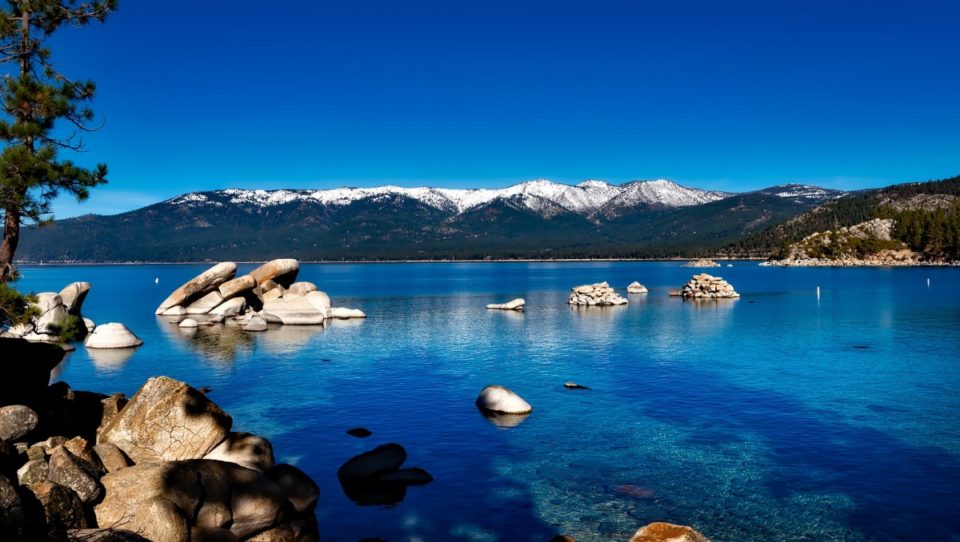 California state is located on the west coast of the USA with many beautiful places such as high mountains, deserts and hundreds of beautiful beaches. In particular, this state not only attracts visitors by its beautiful landscapes, bustling cities, but it is also attractive by historical landmarks. 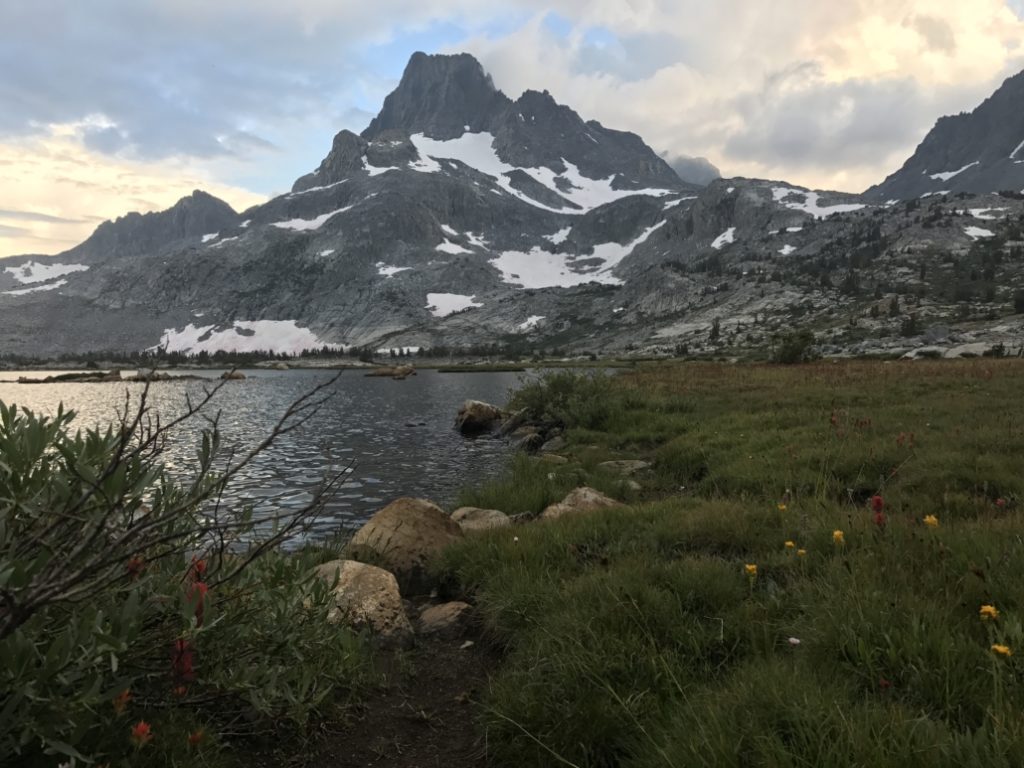 Not only that, with the cable cars operating throughout the summer, California tourists have the opportunity to admire the panoramic view of the green nature of the lake from the top of Minaret. Nearby is the Devils Postpile National Monument, a vertical basalt complex of 19.8m and thought to be formed 1 million years ago. In the distance is a 29.8m-high Rainbow waterfall flowing directly into the San Joaquin thunderstorm. 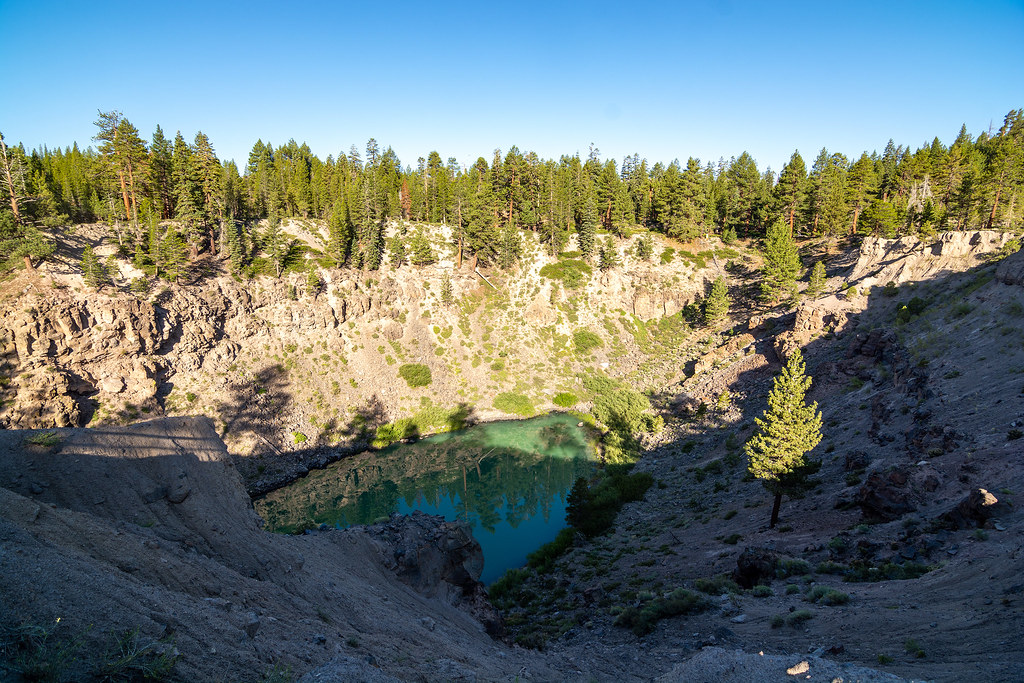 Mono Lake is about 14 miles east of the Yosemite National Park and the same distance south of “Bodie Ghost Town”, California. This salt lake is 1,901 meters deep from the sea level, 15 km wide and 21 km long. Mono Lake is considered to be one of the oldest lakes in the world, with dating back to about 700,000 years ago. The most impressive thing in this attraction is the stone towers, which mostly concentrate on the southern bank exposed when the water level in the lake drops.

Stopped stone towers formed from carbonate materials, over the centuries have created large boulders with many fancy and magical shapes. The creatures that live in the lake are mostly unicellular algae, which are also a great source of food for saltwater shrimp and shrimp genera. In addition, about 70 species of birds fly to the lake area to nest during spring and summer. Although the Mono Lake landscape area has not been widely introduced at present, it promises to bring new discoveries to visitors. 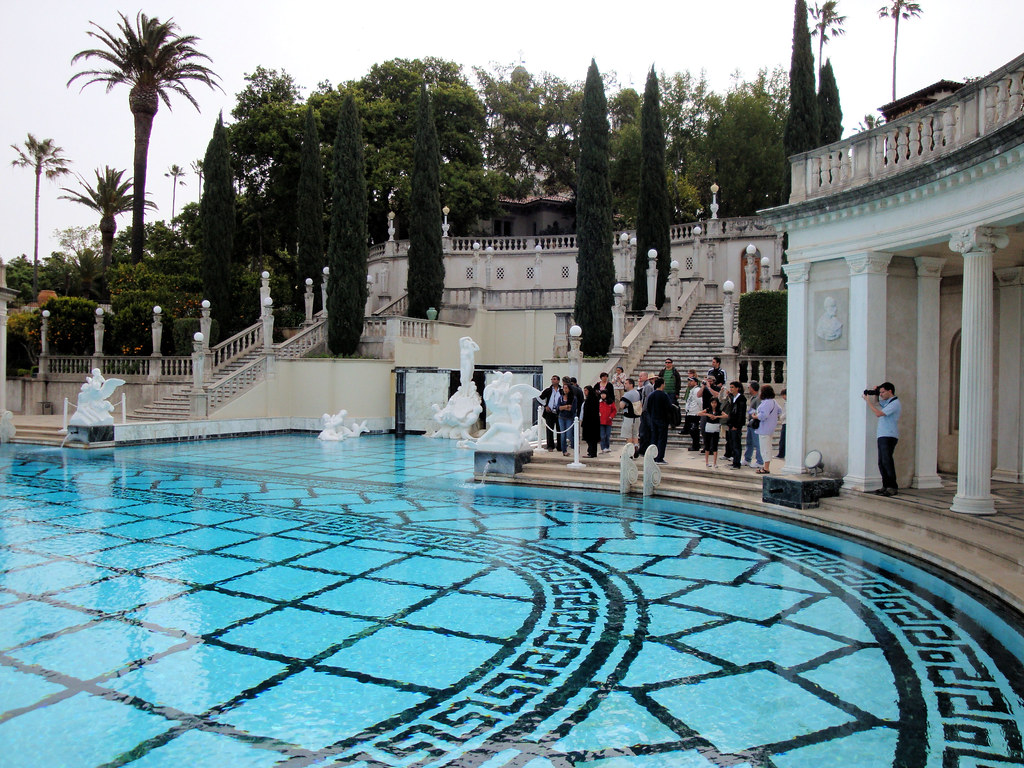 Located in the town of San Simeon (California) is a huge castle called Hearst by the American newspaper tycoon, William Randolph Hearst built. Possessing a large scale, with hundreds of rooms, this is where he has kept the art collection throughout his life.
This work is really a wonderful creation, with a unique design and decoration from indoor to outdoor space that not any castle can have. The castle was officially inaugurated in 1922, but until the time of Randolph Hearst died in 1955, it was not built yet. Hearst Castle has 56 bedrooms, 61 bathrooms, 19 meeting rooms, 127 acre (0.5 km2) garden, indoor and outdoor pool, tennis court, a cinema, and zoo. The world’s largest private sector. Currently this place is one of the attractive destinations in the United States. 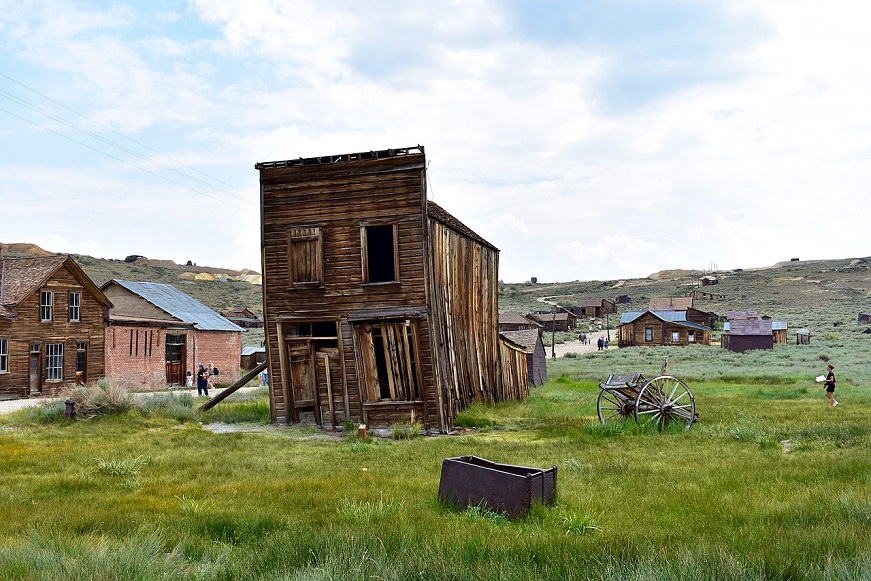 This spooky town of Bodie is located 20 miles southeast of Bridgeport, Connecticut, once inhabited by more than 10,000 gold miners after the discovery of a massive gold mine in 1876. to the point of exhaustion, and with plundering everywhere, the town began to fall into a difficult situation, many people left this place to come to a new land, leaving a scorched and desolate landscape.

In 1964, with government support, Bodie State Park was built to protect and rehabilitate more than 170 old houses and rudimentary gold digging remains in the town. Many visitors to California are interested in the gloomy atmosphere, and the mysterious stories creepy in this ghost town.

It would be a big mistake if traveling to the United States but ignoring Lassen National Volcanic Park in California. The park encompasses the active Lassen volcano (10,457 ft high) and a range of interesting attractions from dimly hot springs, to lakes and forests covered with green leaves. Along with that are countless walking trails that guide visitors deep inside the park. 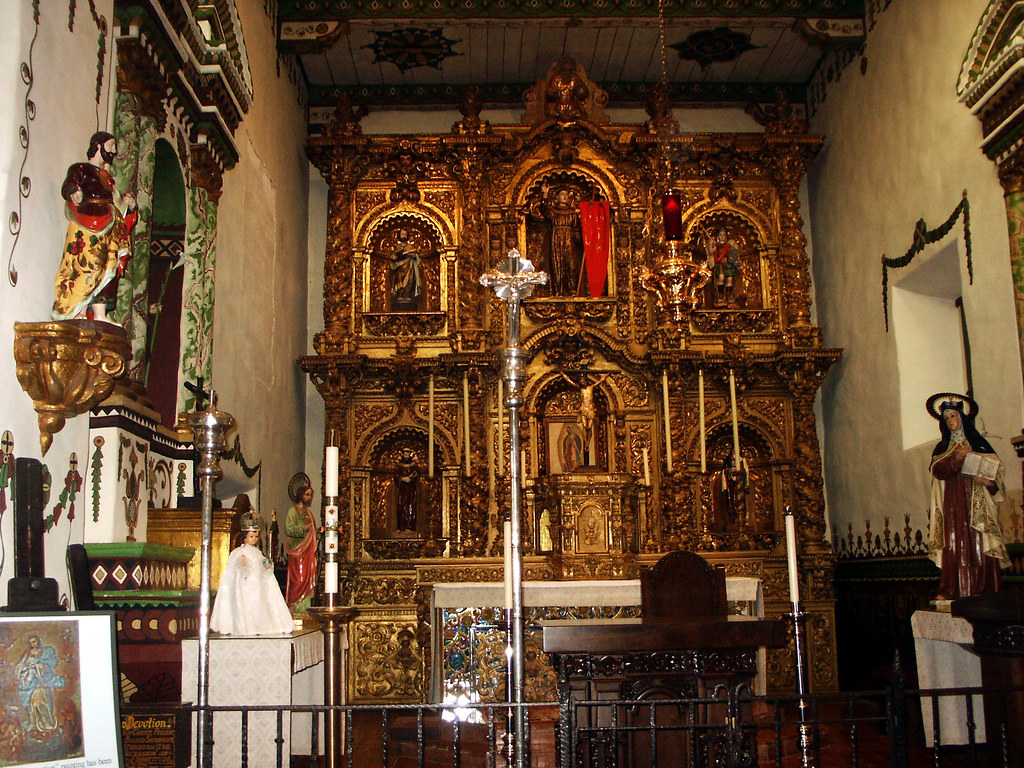 The San Juan Capistrano Church was completed in 1806. Its name is reminiscent of Franciscan priest John John Capistrano, who was canonized in the late 17th century. damage due to earthquakes in 1812 and 1918, and is currently being recovered gradually.
At this sacred church, people always pass on an emotional story about swallow birds that nest in stone walls. Coincidentally, every year they always begin their journey to the south on October 23 (the day Saint John Capistrano died in 1456), and all return on St. Joseph’s Day, March 19. 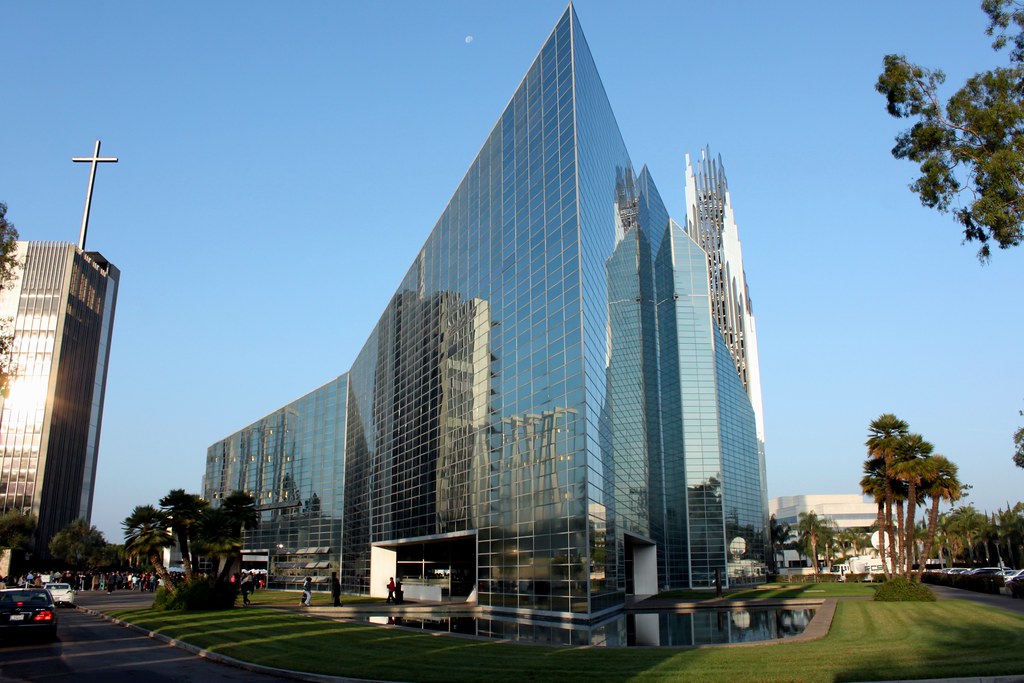 Among the attractive attractions in California, we cannot fail to mention the Crystal Cathedral in Garden Grove. Completed in 1981, the original church was a place of worship for the Great Crystal congregation founded by Protestant pastor Robert Schuller. It is currently owned by the Diocese of Orange.
The 32-acre Crystal church campus includes a fountain, a pool, more than 3,000 seats and a giant 236 ft long bell tower. Especially because of the use of most glass materials, this place is called the Crystal Church or the Church of Glass. 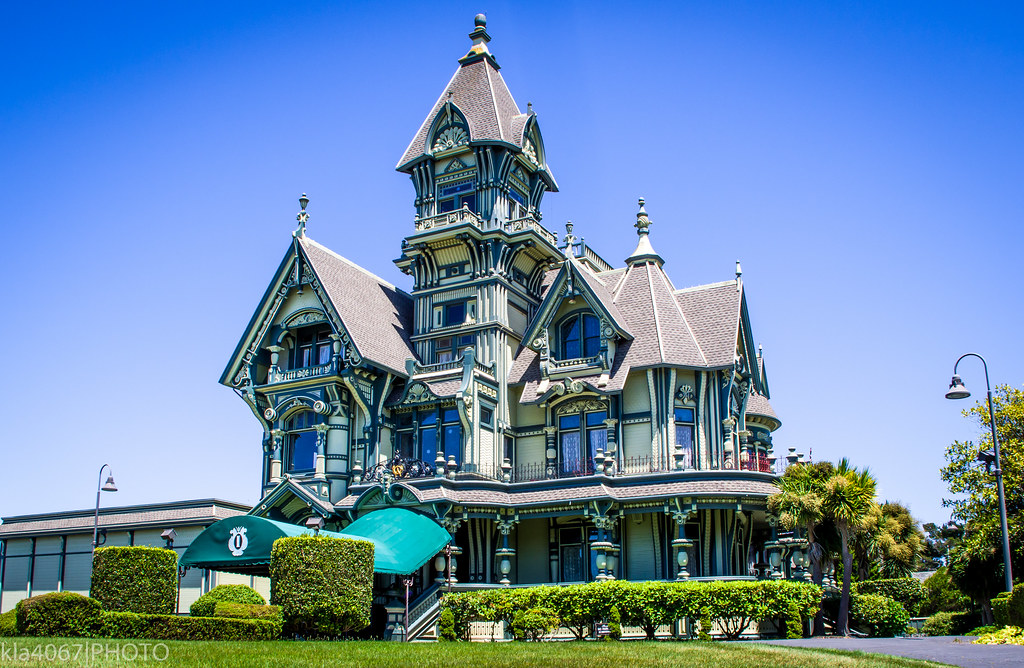 Carson mansion dating from 1885 is known as the most outstanding architecture in Eureka. William Carson, a wealthy wood wholesaler is the owner of this Victorian mansion. Constructed primarily from red wood, with countless frescoes and stained glass windows, the Carson mansion is sure to be a beautiful destination for those who love architecture and classical art. 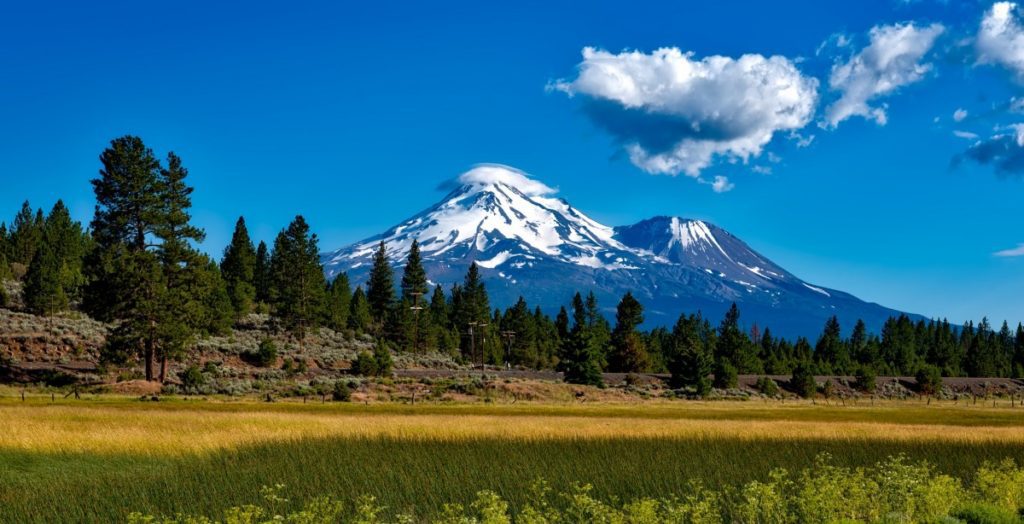 Shasta Mountain, a volcano of 4322m high, is known to be the second highest peak in the Cascade Range. Collection of legends about the first presence of the Indians was born from here. This hill has a slope of about 1,100 ft, and a 15 km long cross-country trail, ideal for California tourists to experience climbing or hiking. Mount Shasta was first conquered in 1854. 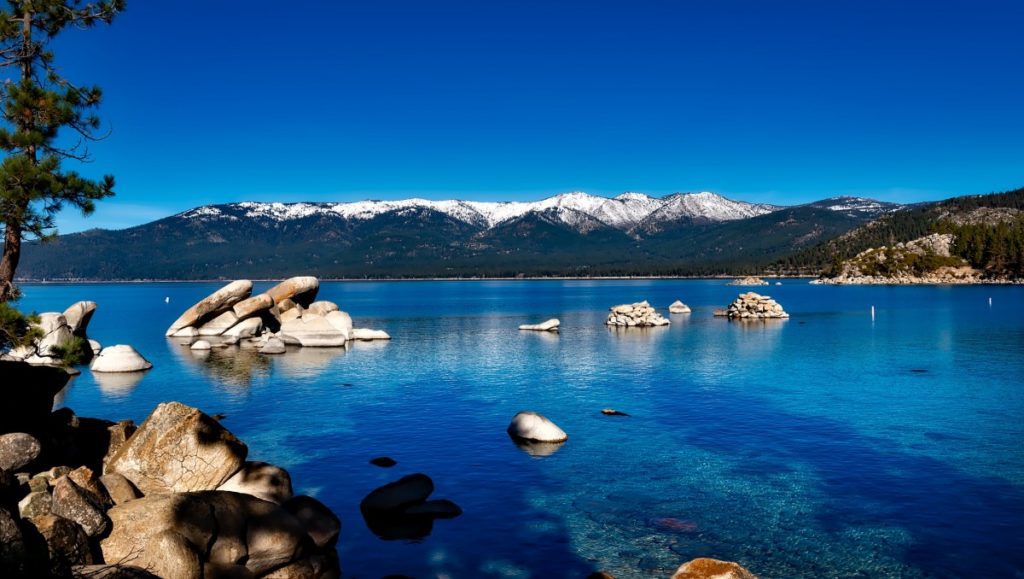 Tahoe Lake is a spectacular place and is among the national natural conservation wonders. This freshwater lake is located in the Sierra Nevada Mountains, USA, bordering 2 states California and Nevada. It is located in the western city of Carson City, Nevada and is considered the lake towering high above and largest in North America. Its depth is about 500 meters (or 1,645 feet) and second in the US.

This lake was formed 2 million years ago and is part of the Lake Tahoe basin. Its current form is thought to have formed during the Ice Age. Lake Tahoe is famous for its clear and magnificent water at any angle.
Going camping in Lake Tahoe is equally exciting. You can rent a bicycle or with your friends organize a hiking trip … from the smooth coastal road to rocky bumpy places.

See more other beautiful places in California with this video :

5 Causes to Go to Brazil Now

I’ve been browsing online more than 3 hours today, yet I never found any interesting article like yours. It is pretty worth enough for me. In my opinion, if all site owners and bloggers made good content as you did, the net will be much more useful than ever before.

Our main objective is to take you to an online casino that you will enjoy without worrying about your safety. All casino brands listed here are authorized by the respective US state gaming divisions. All winnings are paid out, 100% guaranteed! However, winning is not guaranteed, but the Return to Player (RTP) of all online casino games is audited by gaming regulators to ensure players are given a fair chance.

Sweet blog! I found it while surfing around on Yahoo News. Do you have any suggestions on how to get listed in Yahoo News? I’ve been trying for a while but I never seem to get there! Thank you

Howdy! Quick question that’s entirely off topic. Do you know how to make your site mobile friendly? My site looks weird when browsing from my iphone. I’m trying to find a theme or plugin that might be able to correct this issue. If you have any recommendations, please share. With thanks!

lock in lean muscle growth?
Why are you striving to improve your knowledge in bulking/cutting cycles?
Pause the answer in your head for a second. We’ll come back to it.
There’s a reason I ask…
You must understand your ‘why’?
I certainly knew ‘why’ I wanted to kickstart my fitness journey and feel confident…
knew the importance of ‘why’ I needed to create customizable supplements that
provide FAST results with little to no side effects.
So, why do you want to empower your clients with the quickest ways to get ripped?
Are you driven by external motivation, or do you have something deep inside?
Are you doing it for things like money – or are you doing it for the love of fitness?
Partner with us today and make a REAL difference in your clients’ lives.
Skype me ( live:.cid.dd011cd72dfb0a08 ) for more information on free samples and booking a meeting.

We comply with the Notice and Takedown requirements of 17 U.S.C. § 512 of the Digital Millennium Copyright Act (“DMCA”). This site qualifies as a “Service Provider” under the DMCA. Accordingly, it is entitled to certain protections from claims of copyright infringement, commonly referred to as the “safe harbor”

ENG
An innovative platform for investing in real estate and digital assets for your future. We provide an opportunity for everyone to invest in digital assets of promising projects, own shares of these companies and invest in the construction of commercial and residential real estate around the world from 1 square meter in order to get the maximum benefit. The minimum Deposit is one us dollar

The Grid Group team has developed a unique model where partners can create their own capital by earning on the liability of investments in real estate and receive income through the partner program. Get passive income by simply storing GRD tokens on your balance. <a

Just one dollar a month will not be reflected in your home budget, especially since you pay much more for the Internet and do not think about the costs, and your income will increase from month to month. You just need to program yourself to work for a long time in the digital business and remember that there are no freebies on the Internet. Money must be earned competently and honestly. To do this, there is a computer, the Internet and competent programmers – employers. On the Internet, 99.9% of all proposed projects for earnings are scams and hypes that are created by crooks and scammers. We are the 0.1% that people trust. We are not ashamed of our system! On the Internet, you will not find reviews from people who have been affected in our system. There are only a few paid fake experts who are trying to denigrate our company (although the <a and <a projects received <a from Yandex "a Site with a high degree of user engagement and loyalty")… These false experts advertise Scam banners on their websites, under the guise of alleged decency. This must be understood!

Do you want to become a financially independent person? Go to our system where you will be helped, prompted and taught. We are in touch around the clock. <a

Cathedral Peak is one part of the mountain range known as the Cathedral Range. The peak got its name because of the shape of the peak that looks like a cathedral. Glacial activity formed the peak and it has remained in its current form for many years.