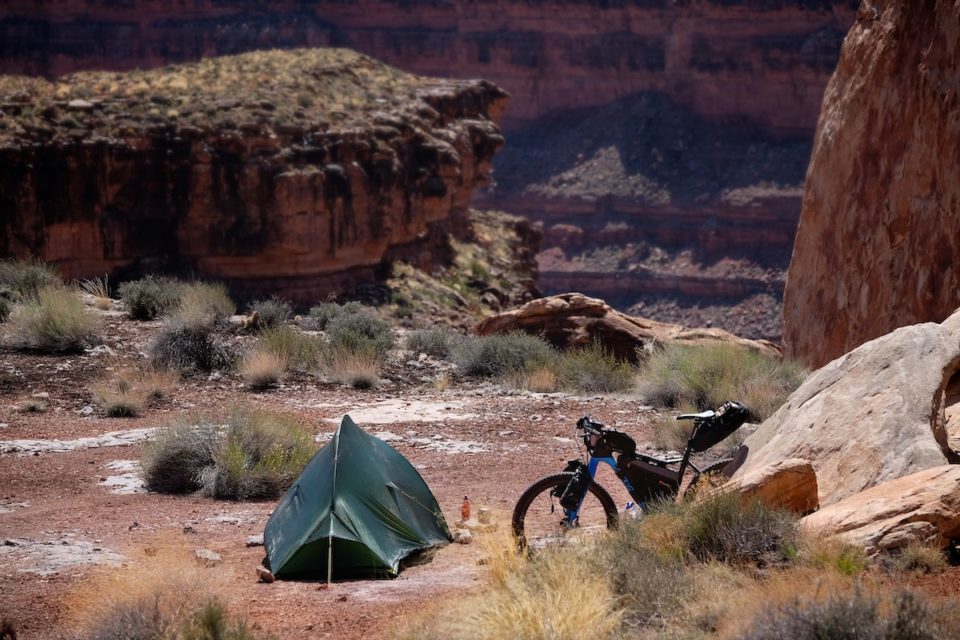 The evening sun lay low as I dismounted my bike and walked off the trail into a labyrinth of creosote and prickly pear cactus. Minding every step, I arrived at the rim of the San Juan River gorge and leaned over the edge. The walls of the chasm fell away in a series of steps and cliffs to a muddy ribbon of water 500 feet below. A gust of wind riled a swirl of sand as I looked through squinted eyes to the first ledge just below my feet. My imagination instantly manifested the gruesome image of a headless body twisted amongst the rocks. A chill shot up my spine. Maybe doing this ride solo wasn’t a great idea.

Only hours earlier, I left my car at the mouth of John’s Canyon and started my push westward along the southern boundary of Utah’s Bears Ears National Monument. I pedaled briskly hoping to make the most of a short afternoon, the weight of eight liters of water slowing my progress. The high desert is beautiful in the waning light of day, but on this occasion I wasn’t ready for the arrival of darkness. Not just any other bikepacking romp, my route retraced the footsteps of a nefarious killer. For the first and last time ever, my GPS unit contained the approximate coordinates of victims dispatched and bodies dumped. There were most surely ghosts in the canyon. I could feel their presence.

I first learned of the John’s Canyon murders years ago while skimming through a five-page newspaper in Blanding, Utah. A small editorial on the back page announced the 70th anniversary of the macabre events. The lack of details seemed to assume everyone from the area already knew them. I didn’t.

In 1934 during the crush of the Great Depression, a grifter named Clint “Jimmy” Palmer arrived in the town of Hugo, Oklahoma. There he met Dillard Garrett and his 13-year-old daughter, Lucile. The Garretts could not have known it then, but Palmer was already an all-around ne’er-do-well, moonshiner, and convicted felon. Made a perpetual itinerant on the run from the law, he was also a confirmed pedophile and suspected psychopath. It wasn’t long before Palmer had designs on young Lucile and eventually murdered her father. He buried the headless torso in a river bank, kidnapped the young girl, and fled to the isolation of John’s Canyon.

The high deserts of the West have long been a hideout for people escaping society. It’s the very reason why I found myself pedaling a loaded bike along a sandy road. I was admittedly dodging work. Palmer hoped to outrun the hangman and live in seclusion with his captive bride. But unlike me, the only person for miles, they weren’t alone in the canyon.

It didn’t take long for the irascible Palmer to get entangled with the only other residents in the area. Working as a sheepherder, Palmer regularly tussled with cattle ranchers over grazing rights and access to water. It all came to a boil in 1935 when local rancher William Oliver confronted Palmer. In a foolhardy move, Oliver lashed Palmer with a rope in anger. Palmer responded instantly and shot Oliver, then emptied his gun into his lifeless corpse. Still unsatisfied with the deed, he cut off Oliver’s head with an axe and dumped the body over a cliff. Only hours later, he did the same to Oliver’s grandson, Norris Shummway. They say time never forgets the desert. It is true things don’t seem to age in the arid environs of Southern Utah. Along my route I pedaled by dozens of ancient petroglyphs, their mysterious carvings illustrating a hard but simple existence of hunting and foraging. At the far end of my ride at the mouth of Slickhorn Canyon, the detritus of an old oil rig littered the ground. Rusted peach cans and glass jars traced the outlines of old shacks. I even found the crude stone hut Palmer and Lucile used to survive the winter and summer of 1934 and 1935.

I have ventured into the backcountry of Utah for more than two decades and consider myself a hardened traveler for doing so. When I think of young Lucile, the life she endured those years, and the tragedies she witnessed, I realize I’m not tough at all. Ponied up on a carbon fiber mountain bike and sleeping in a high-tech tent, my time in John’s Canyon made me a tourist, not a tough guy.

Before the murders of Oliver and Shummway, Lucile’s life was a living hell. In the winter months of 1934, while pregnant with her captor’s child, she was taken to Goulding’s Ranch to receive proper care. She eventually gave birth to a son, James Dee, who died just seven days later. It’s hard to comprehend her resiliency. She was never given a fair break. Not long after the capture of Palmer and his convicted for the murder of Lucile’s father, Lucile herself was convicted of consorting with a known criminal; a tragic and misplaced interpretation of events.

I didn’t spend much time riding in the desert around John’s Canyon. The miles I covered were not great or even all that challenging. The scenery was mind-bindingly beautiful, but the weight of Lucile’s story, above that of Palmer or his other victims, blankets the red rocks and low scrub.

When I returned to my car I took a moment to take in the silence. I tried to imagine the sounds of gunshots as they echoed off the canyon walls. Bikepacking trips are seldom so introspective. It was a refreshing change to plod along, lost in a narrative not even Hollywood could best. And like most good stories, this yarn also has a happy ending. Despite her tribulations, Lucile went on to live a pleasant life filled with the normalcy she was deprived of in her youth. She survived John’s Canyon.

So You Wanna Be An Journey Photographer?

Definitely consider that that you stated. Your favorite reason appeared to be on the web the simplest factor to keep in mind of. I say to you, I definitely get annoyed while other people consider issues that they just don’t realize about. You controlled to hit the nail upon the top and also defined out the entire thing with no need side effect , people can take a signal. Will likely be again to get more. Thanks