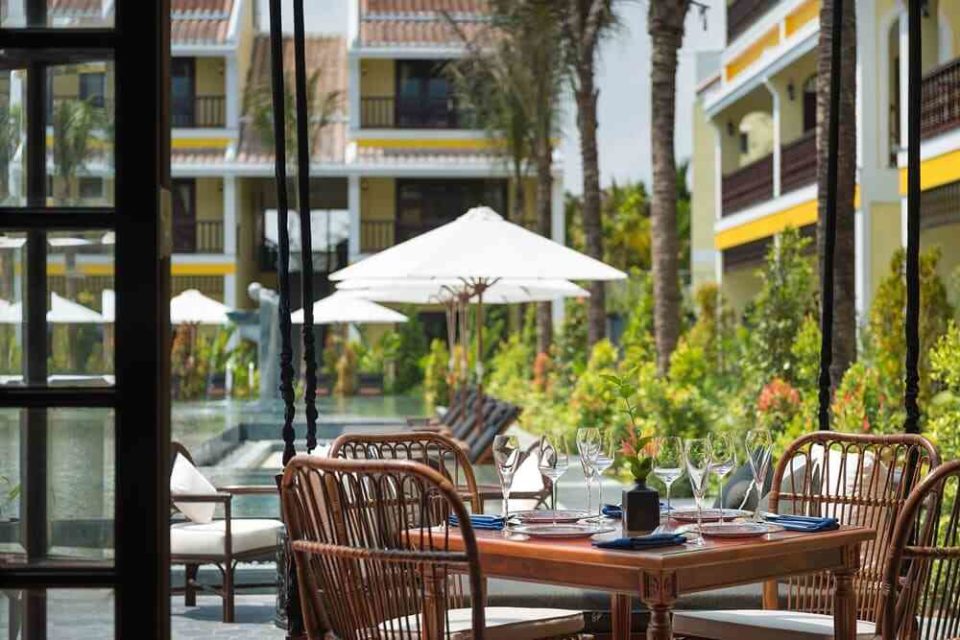 In a new Tripadvisor listing of Vietnam’s 2021 best restaurants, Hanoi accounted for the most with seven representatives and HCMC, Hoi An and Phu Quoc for the rest. 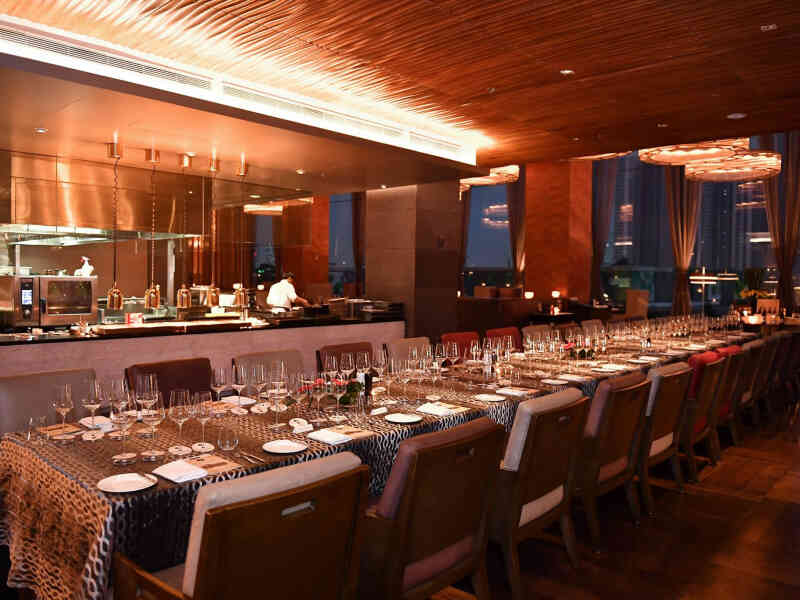 French Grill Restaurant in Hanoi was voted the best restaurant in Vietnam, according to the annual ranking compiled by the U.S. online booking site Tripadvisor, based on millions of reviews and collected opinions. Located in the lobby of the five-star JW Marriott Hotel Hanoi in Nam Tu Liem District, French Grill serves classic French cuisine with a local twist, and has become popular among foreigners. Led by French chef Jean-Francois Nulli, the restaurant serves dishes like seared foie gras, classic caviar and premium steak at prices ranging from VND300,000 to 700,000 ($13.06-30.46). 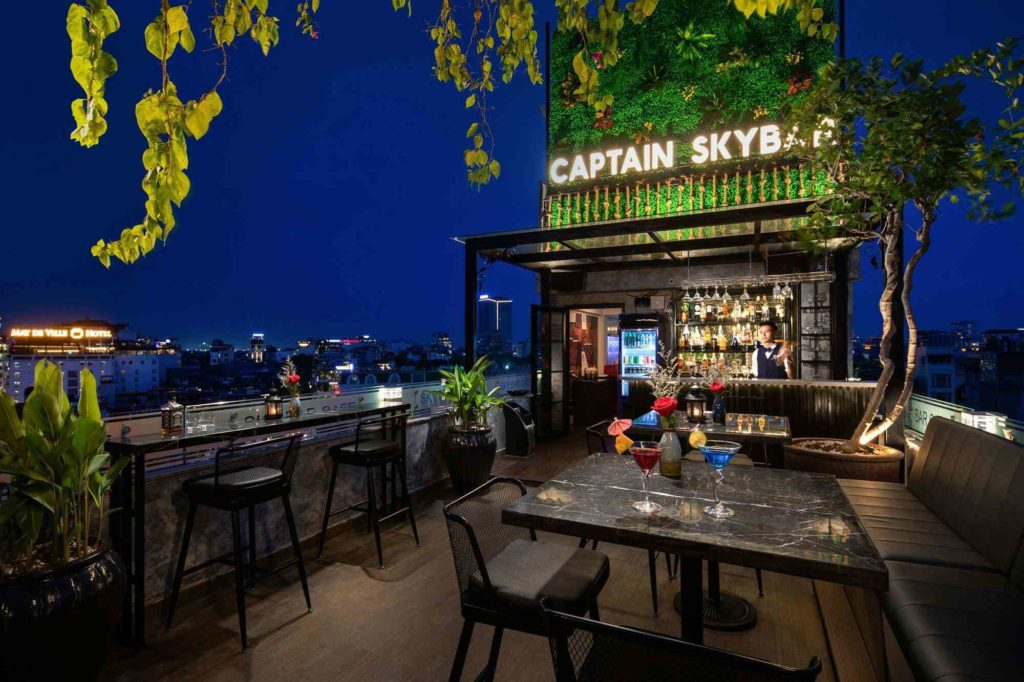 Captain Skybar & Restaurant on Hang Gai Street in Hoan Kiem District near the Old Quarter ranked second on the list. Located on the 11th floor of Silk Collection Hotel & Spa, the restaurant allows guests to enjoy an aerial view of Sword Lake and other iconic hotspots in Hanoi. It mainly serves Japanese and European dishes besides beer cocktails with prices ranging from VND100,000 to 350,000. 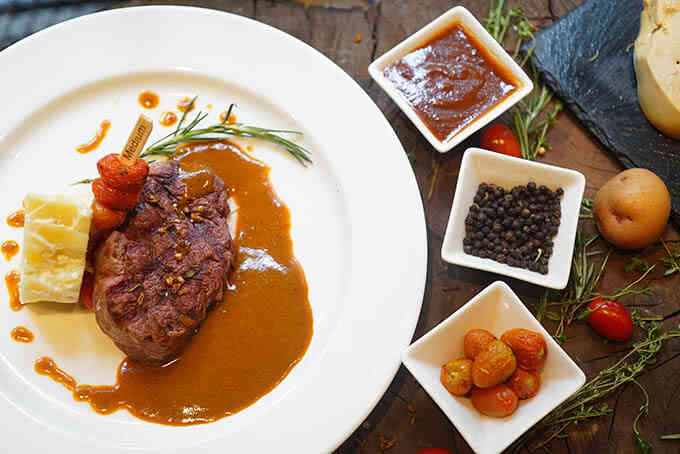 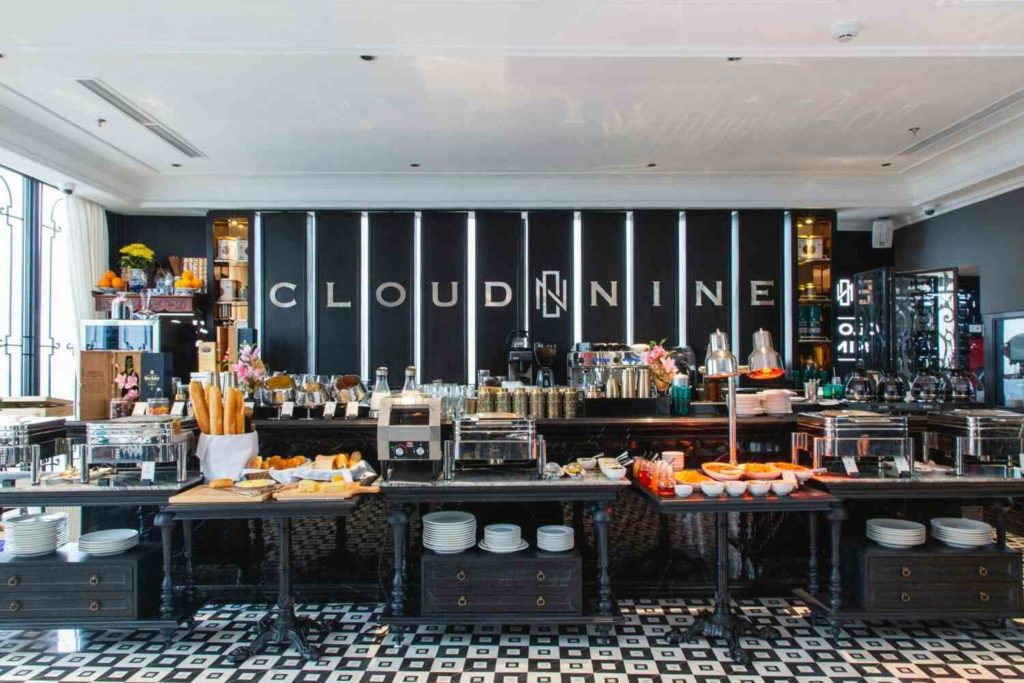 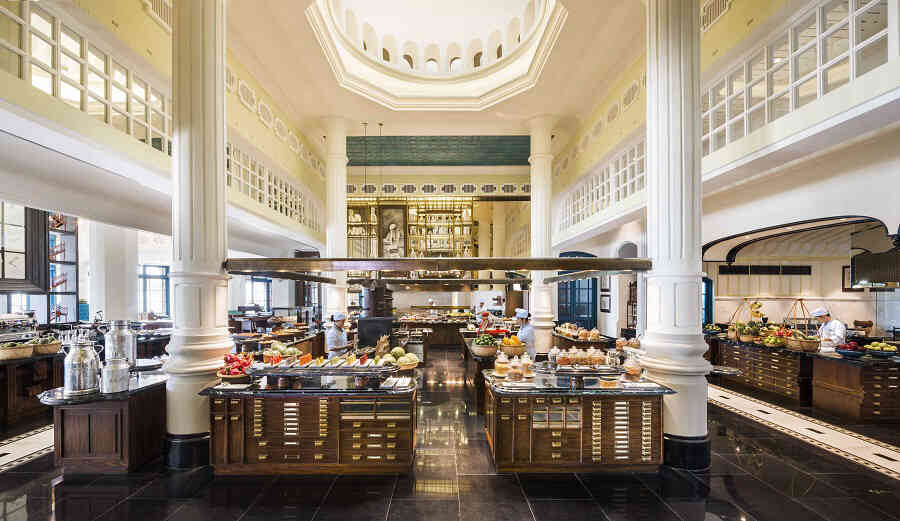 Tempus Fugit Restaurant at JW Marriott Phu Quoc in An Thoi Town, Phu Quoc Island in southern Vietnam came in fifth position. The restaurant mainly serves Vietnamese specialties, Japanese cuisine and Western flavors like Bibimbap, crepes, pancakes, waffles, bread pudding, while all dishes are prepared in an open kitchen. Guests can start their day with a buffet breakfast offering a variety of European and Asian dishes, have lunch and dinner with a la carte menus featuring local seafood. 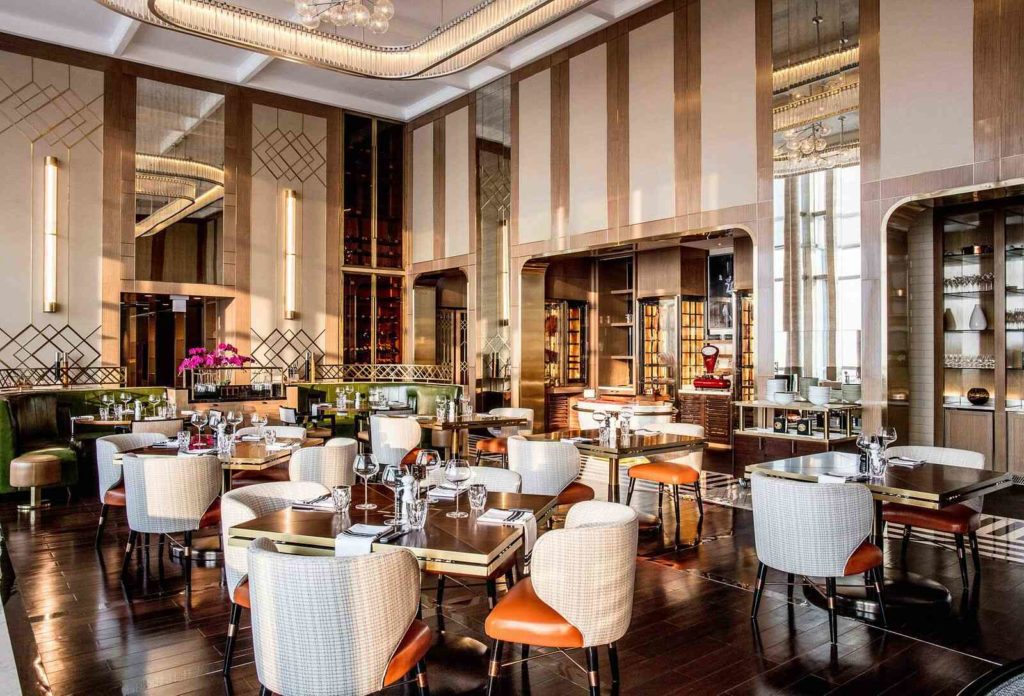 Stellar Steakhouse inside InterContinental Hanoi Landmark72 on Pham Hung Street in Hanoi’s Nam Tu Liem District came sixth. Located on the 62st floor of the building, it is the only restaurant in Hanoi that offers in-house dry-aged beef. The restaurant is one of the most famous beefsteak spots among the expat community in Hanoi where diners can enjoy aerial night views of the capital. It is open from 6 p.m. to 10 p.m., with prices ranging from VND500,000 to 1 million. 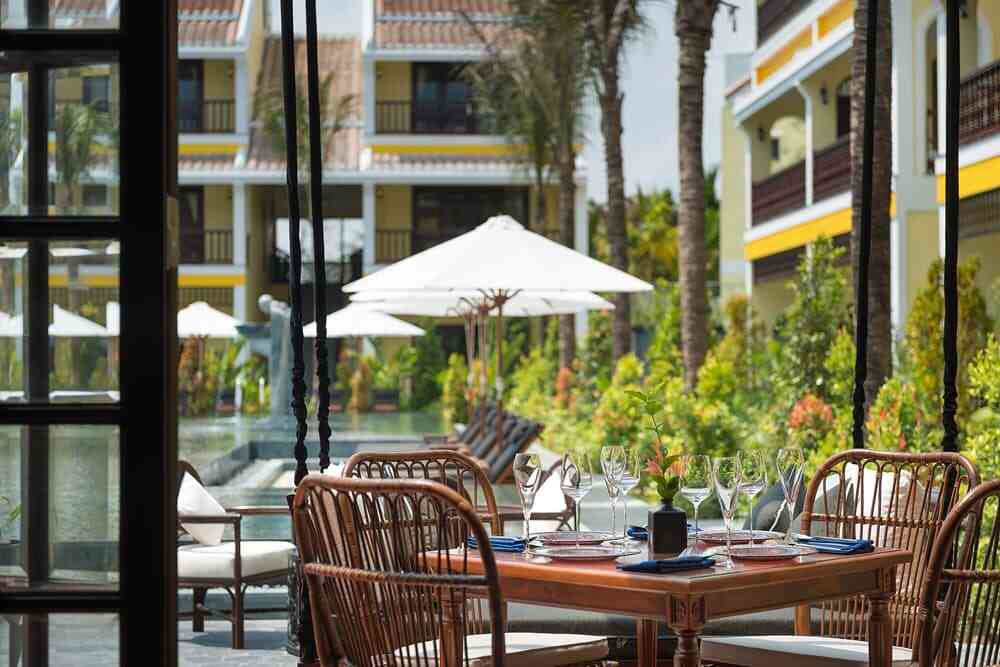 Temple Restaurant & Lounge at five-star La Siesta Hoi An Resort & Spa in the ancient town of Hoi An ranked seventh on the list. The restaurant’s name is inspired by a nearby community house that acts as a traditional place of worship. Its menu features European dishes like seafood and assorted meat platers, French duck breast and prawn cocktails. The restaurant offers diners an outdoor space near a swimming pool while its décor resembles that of ancient houses across Hoi An with yellow walls. Its prices range from VND100,000 to 2 million. 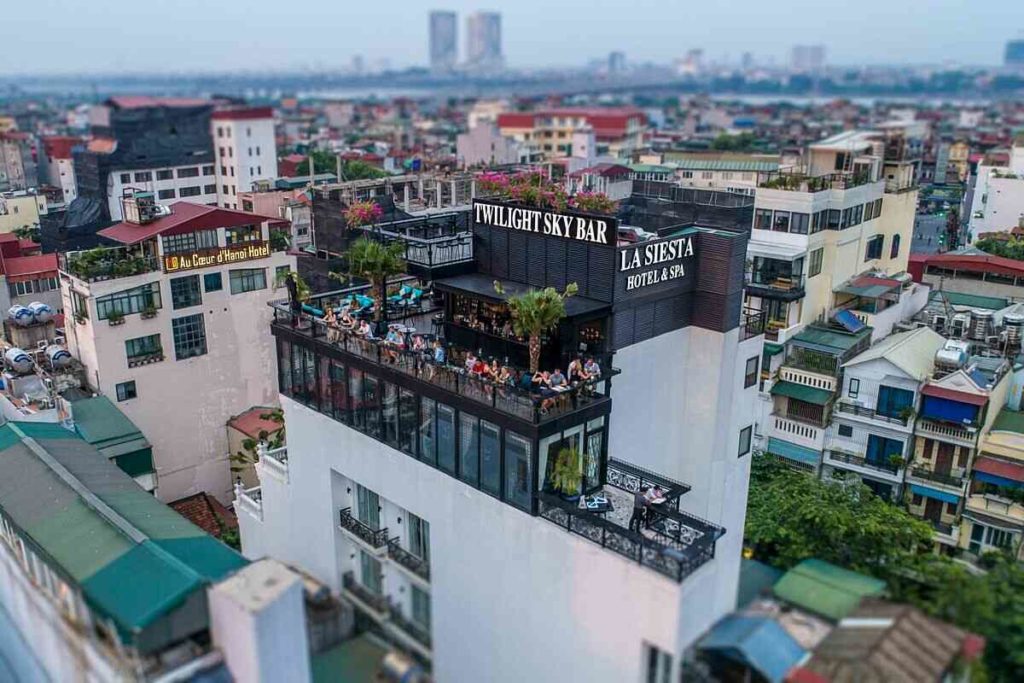 Twilight Sky Bar and Restaurant on the 8th floor of La Siesta Hotel & Spa on Cau Go Street in Hanoi’s Old Quarter ranked eighth. The restaurant serves fast food, European and Vietnamese dishes, wine and is an ideal place to watch the sunset or enjoy nightlife in Hanoi. Its prices range from VND200,000 to 500,000. 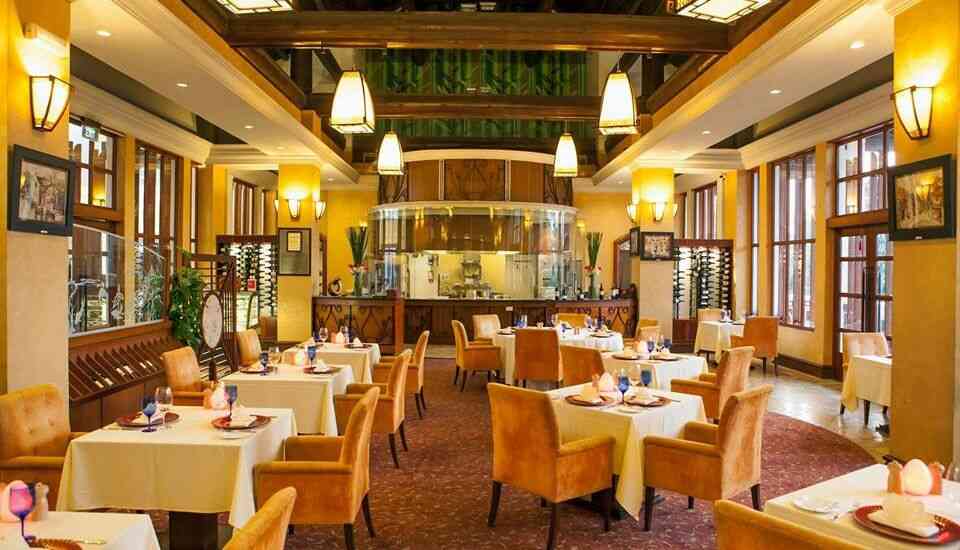 Hemispheres Steak & Seafood Grilled restaurant on the second floor of five-star Sheraton Hanoi Hotel came in ninth. The restaurant offers a menu with a variety of choices like Black Angus, U.S. Prime Sirloin, Rib Eye, Grilled Rump and Tenderloin served with different sauces as well as fresh salads and vegetables, with prices ranging from VND180,000 to 1.7 million. 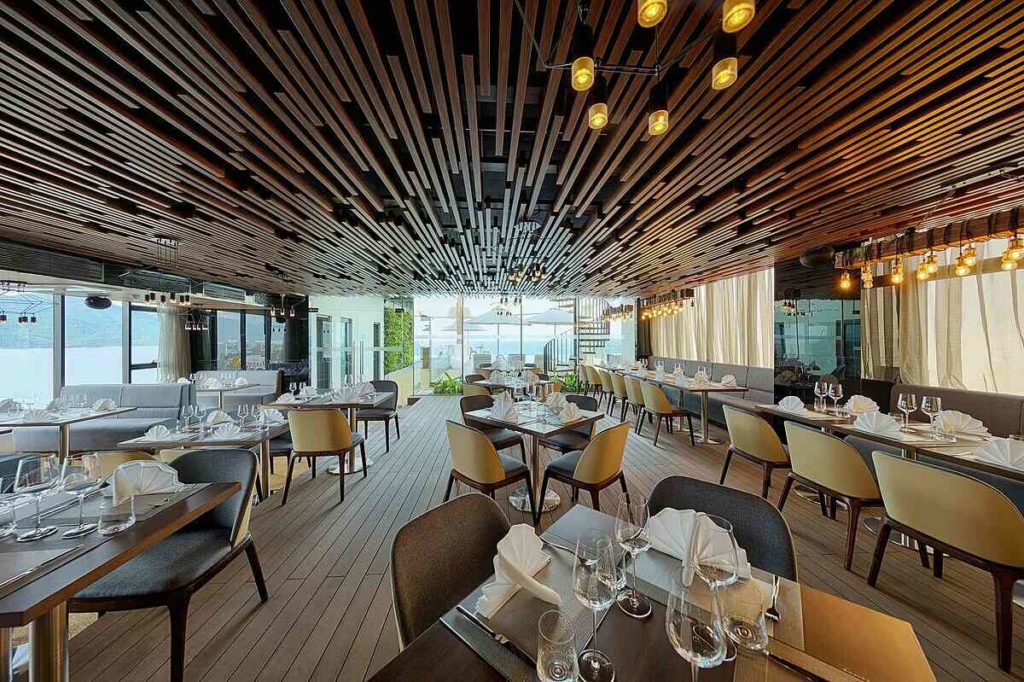 Located on the 20th floor of Belle Maison Parosand Danang Hotel on Vo Nguyen Giap Street, Sky View Restaurant completed the top 10 list. The restaurant, which mainly serves European dishes and seafood, is capable of accommodating 108 guests at a time. It allows guests to enjoy aerial views of Da Nang City and its long, sandy beaches.
It is open from 11 a.m. until 11 p.m. with prices ranging from VND50,000 to 500,000.