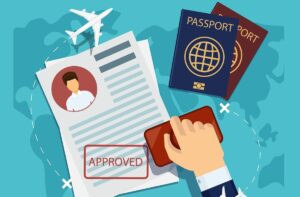 Travel firms specializing in the Europe market said they have canceled tours or made last-minute itinerary changes after Germany refused to grant visas to holders of Vietnam’s new passports.

The new passports, which Vietnam began issuing on July 1, have not been recognized in Germany yet and their holders cannot apply for visas as the passports lack information on place of birth, the German Embassy in Vietnam said Thursday.

Germany’s action has dealt an immediate blow to travel firms that organize outbound tours. Germany, along with France and Italy, are the main tourist destinations in Europe.

“Currently, we have canceled tours to Europe for dozens of tourists holding the new passports and the damage is very serious,” Nghia told VnExpress International Thursday afternoon.

Nghia said he was most worried that the German government’s decision could have a domino effect, leading to other countries in the Schengen area to impose similar restrictions on the new Vietnamese passports.

He hoped Vietnamese authorities would quickly work with the German government to deal with the issue, as the outbound tourism market has just started showing signs of recovery after more than two years of the pandemic crisis.

His company had organized a tour bound for Germany, the Netherlands, Belgium, France and Luxembourg that was scheduled to depart Thursday.

Because the tour had a few tourists using the new Vietnamese passport, the company had to make last-minute changes in the itinerary for the affected customers to avoid the possibility of their being denied entry into Germany.

This meant that the company had to change flight tickets and accommodation at the last minute, too.

German authorities have said they cannot find information regarding the place of birth based solely on one’s personal identification number as shown on their passports. It would mean that they would need to verify a person’s identity manually with a seven-page list, and not everyone has the list.

According to a Wednesday announcement on the website of the German Embassy in Vietnam, holders of Vietnam’s new passports with the dark blue cover instead of the traditional green ones, will not be able to apply for a C or D category visa to enter Germany.

A Schengen short-stay visa to Germany, known as a C-type visa, allows visitors to stay up to 90 days while those planning to stay longer than 90 days in the country need to apply for the D-type visa.

German authorities have also warned that holders of the new passports who’ve already been granted a visa shouldn’t travel to Germany as they might be denied entry at the border.