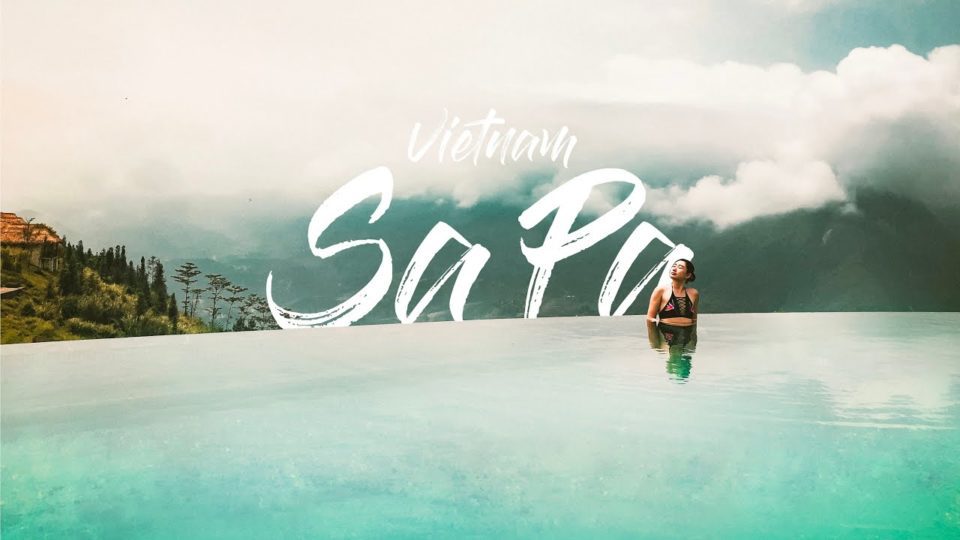 If you are planning for your next trip to Vietnam, you can’t miss this pretty destination.Sapa is known as the jewel in the North of Vietnam. Let’s discover Sapa Vietnam travel guide & the best things to do in Sapa 2022 !

A summer hideout for the French colonialists once, Sa Pa is a top tourism spot today. Apart from its own attractions, it is a basecamp for discovering Vietnam’s northern highlands.

Located at an altitude of over 1,500 meters above sea level in Vietnam’s northwest mountains, Sa Pa enjoys cool climate all year round.

In the months of June, July, August and September visitors are most likely to experience good weather with pleasant average temperatures that fall between 20 and 25 degrees Celsius. Early in the morning and after 5 p.m., Sa Pa’s temperature drops to around 16 degrees Celsius, making it ideal to enjoy the town’s signature dishes like salmon hotpot and grilled skewers.

For those not fazed about cold conditions, the winter season between December and February is not a bad choice. The landscape takes on a completely different look and there is the chance of seeing snow and ice on mountain peaks, though this is not a frequent occurrence.

WHERE TO STAY IN SAPA

After the cable car project leading to Mount Fansipan began operation a few years ago, Sa Pa has witnessed a tourism boom, prompting investors to pour money into hotel projects.

Some luxury resorts that have won mentions in international travel magazines for their unique architecture and other features include the Topas Ecolodge, Sapa Jade Hill, Hôtel de la Coupole – Mgallery and Silk Path Grand. 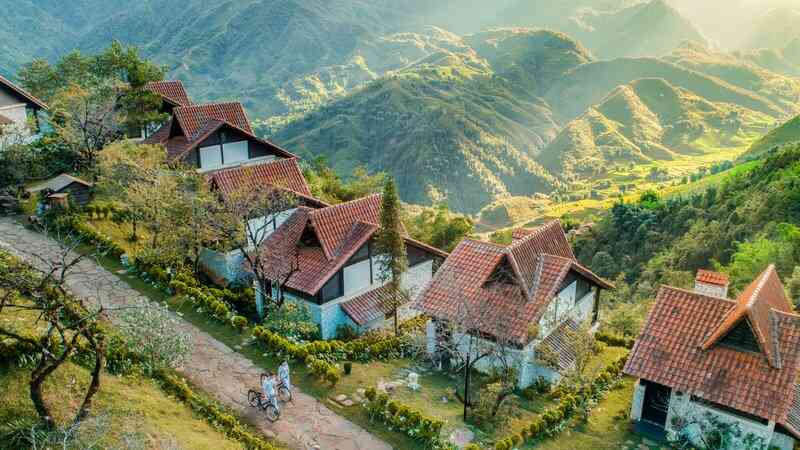 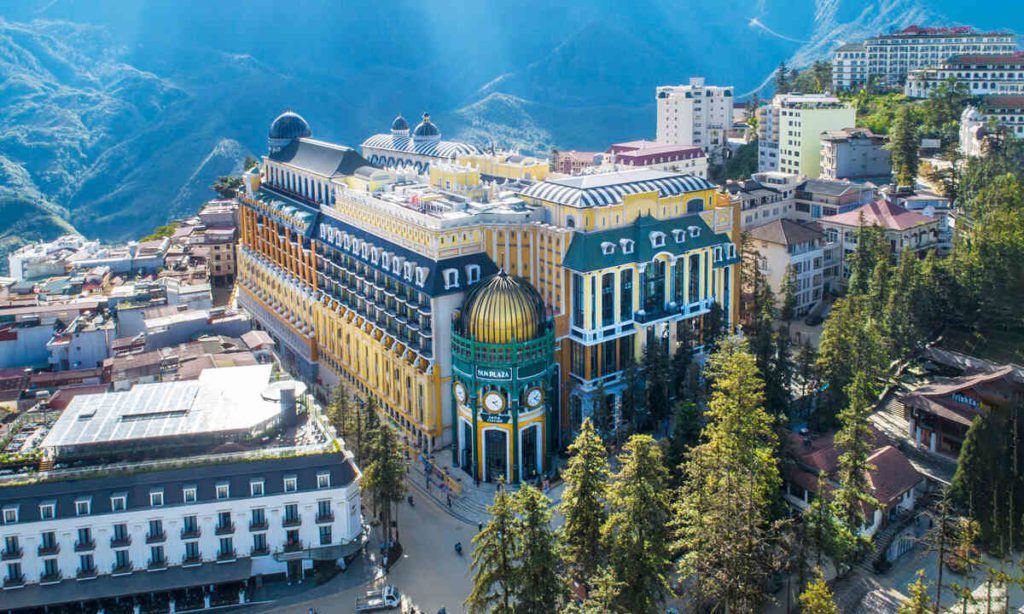 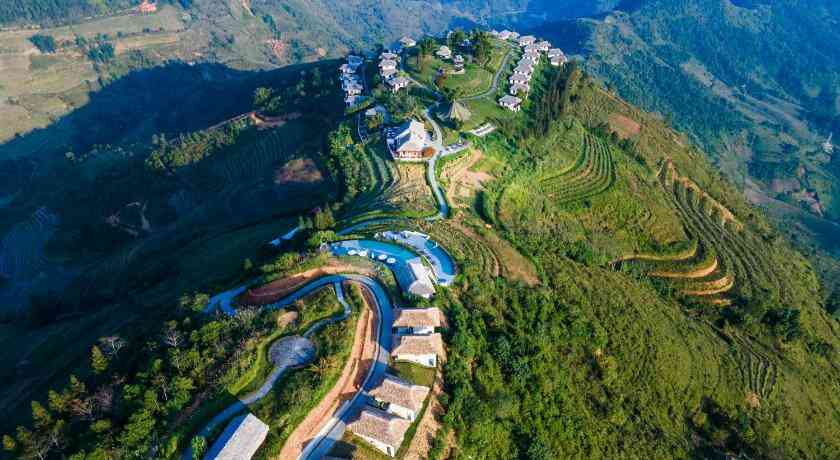 HOW TO GET SAPA

Hanoi – Lao Cai trains run every day. After a four-hour train journey, a bus or taxi can be taken to downtown Sa Pa. Train tickets cost from VND160,000 to 800,000 per person depending on seat class and train type.

Those driving to Sa Pa by themselves can follow the Noi Bai – Lao Cai highway, then turn to the 4D road to reach Sa Pa. The road is easy to travel on, but weather conditions need particular attention.

In the future, it will get easier visit Sa Pa. Construction of an airport near the tourist town began in March this year with a total investment of around VND7 trillion ($306.5 million).

THE BEST THINGS TO DO IN SAPA

Fansipan, at 3,147.3 meters above sea level, is the highest mountain in the Indochinese Peninsula, hence its nickname “the Roof of Indochina.” Conquering its summit on foot can be a once-in-a-lifetime experience for most tourists. 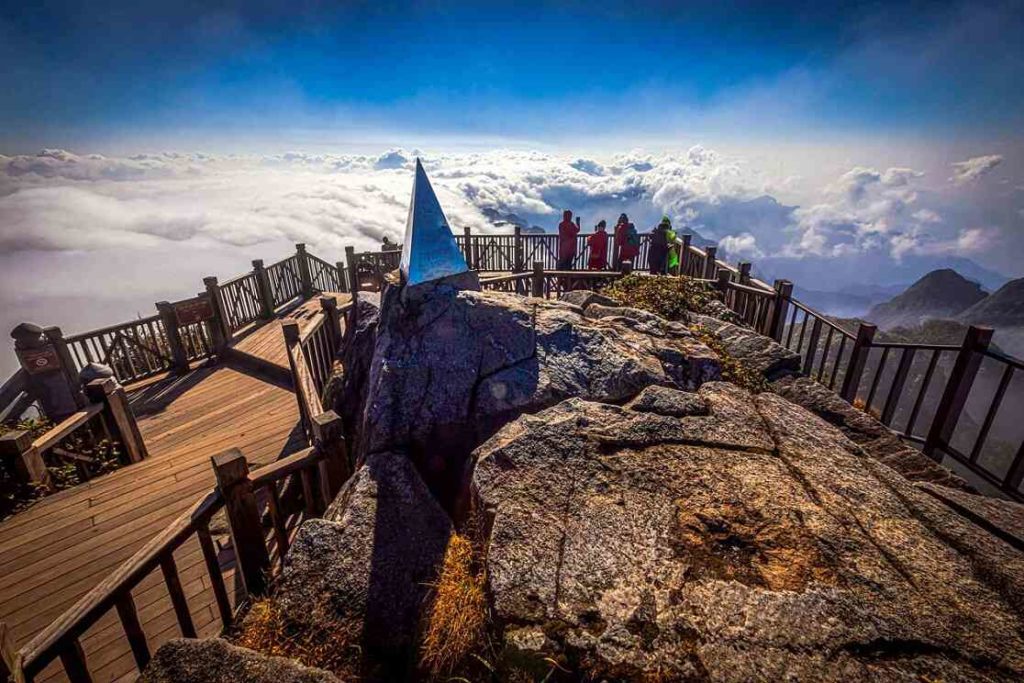 But the trail to reach the summit of Fansipan mountain is not easy to conquer, especially for amateur trekkers, as they have to negotiate different terrains, steep slopes, towering cliffs and thick jungle.

In recent years, some tour agencies have begun offering Fansipan trekking tours that cost $70 per person for a two-day trek that include a hiking tour specialist, a picnic lunch, entry fee, and round-trip car transportation.

From hotels in the downtown area of Sa Pa, trekkers are taken to the Tram Ton Pass where permission has to be obtained from forest rangers to climb the mountain.

After four hours of trekking, visitors will stop for lunch beside a small peaceful stream at the height of 2,200 meters above sea level. In the afternoon, the journey continues to an altitude of 2,800 meters, where trekkers stay overnight in small camps, enjoying magnificent views of the northern mountains.

The next morning, trekkers will continue their journey to the summit and visit the complex of Buddhist pagodas that stands out with the Great Amitabha Buddha statue recognized as the copper statue located at the highest altitude in Asia by the Guinness book of World Records. 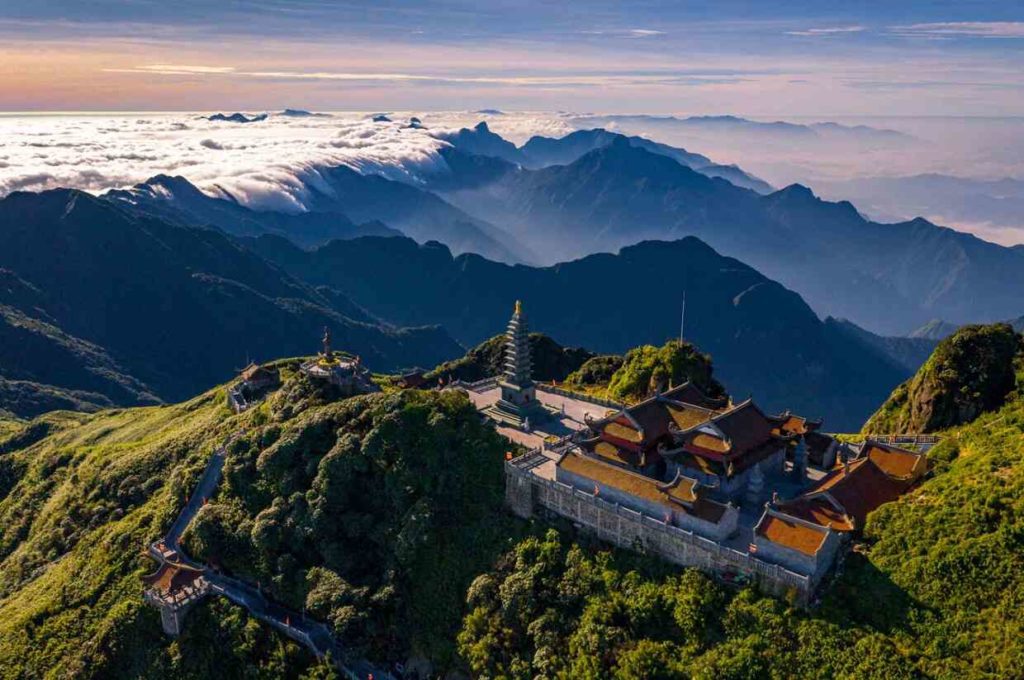 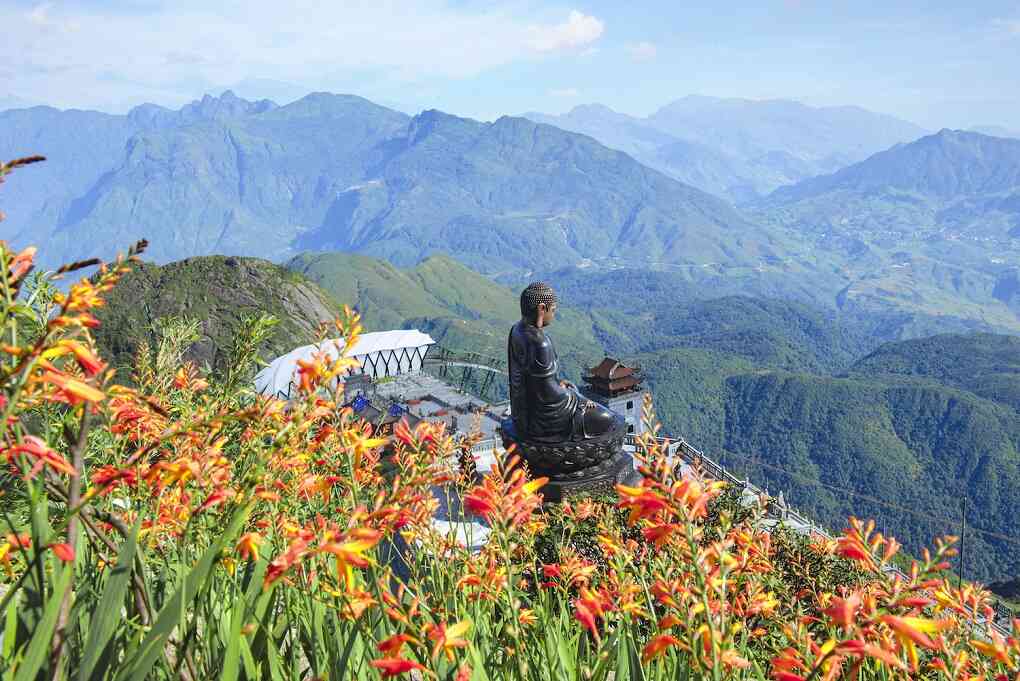 Built in 2015, the bronze statue is 21.5 meters tall and made with thousands of bronze pieces five millimetres thick. Its pedestal is decorated with a dragon and flowers.

“Climbing Mount Fansipan in one day via the Tram Ton Pass trail is something that most people in good health can do. However, it requires significant physical effort and, because of the altitude, breathing difficulties caused by lack of oxygen make the climb even more of a challenge,” said Mike, a tourist from the U.S.

A representative of the Hanoi-based Asia Charm Tours said foreigners typically book Fansipan tours between October and December as this period is more often than not free from heavy rains.

However, the best time for the trek to the mountain is from the end of February to the start of March, which coincides with the blooming season of violets, orchids, rhododendrons and aglaias. 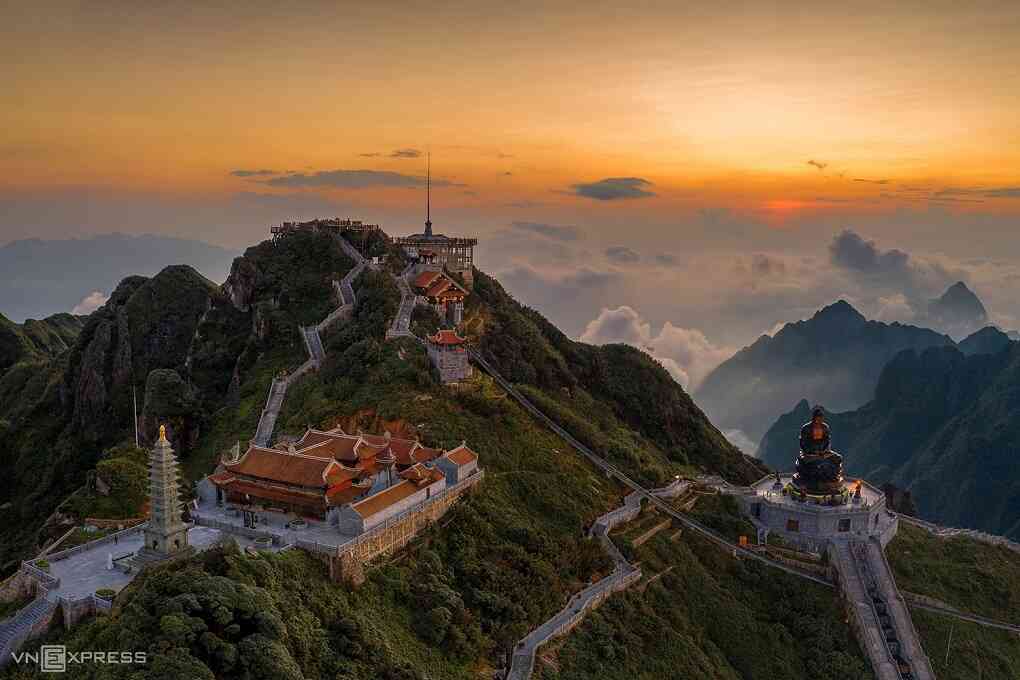 The 1,850-meter Ham Rong Peak, which gained international fame after American publication Huffington Post described it in 2015 as one of the eight best places in the world to watch the most beautiful sunsets, is another tourist gem in Sa Pa. 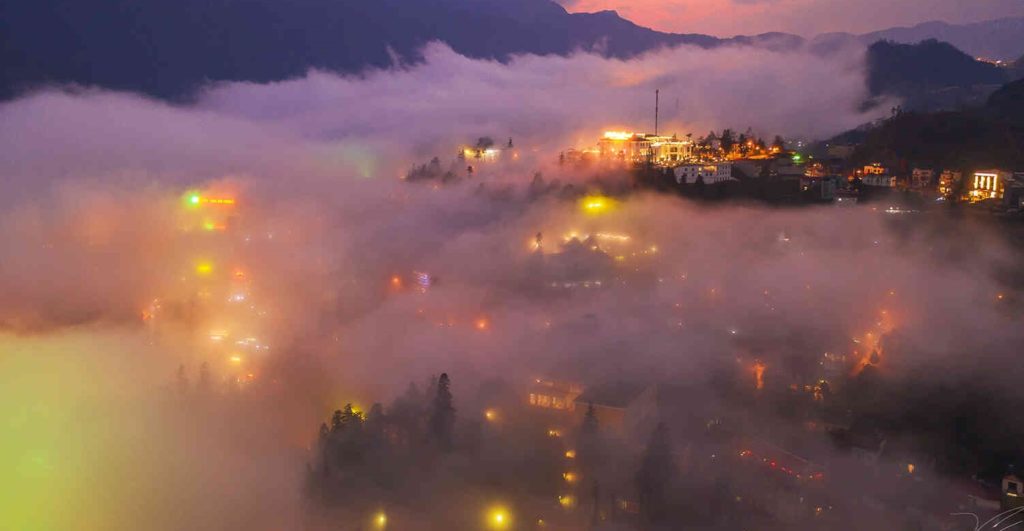 Located right behind the Sa Pa stone church, the mountain is shaped like a dragon holding its head up towards the sky, hence its name, which literally means “dragon’s mouth.”

An VND70,000 ticket allows access to the tourist area that was established in 1996.

Here, while ascending the stone steps leading to the mountain, a flower garden with 190 species of orchids is a soothing sight.

The last stop, at almost 6,000 feet above sea level, is the Cloudy Yard from where visitors can revel in the panoramic view of Sa Pa Town with clouds drifting past.

Located at the foot of the Ham Rong Mountain, a Gothic-style stone church built by the French in the 20th century has become a tourism symbol of the misty town. 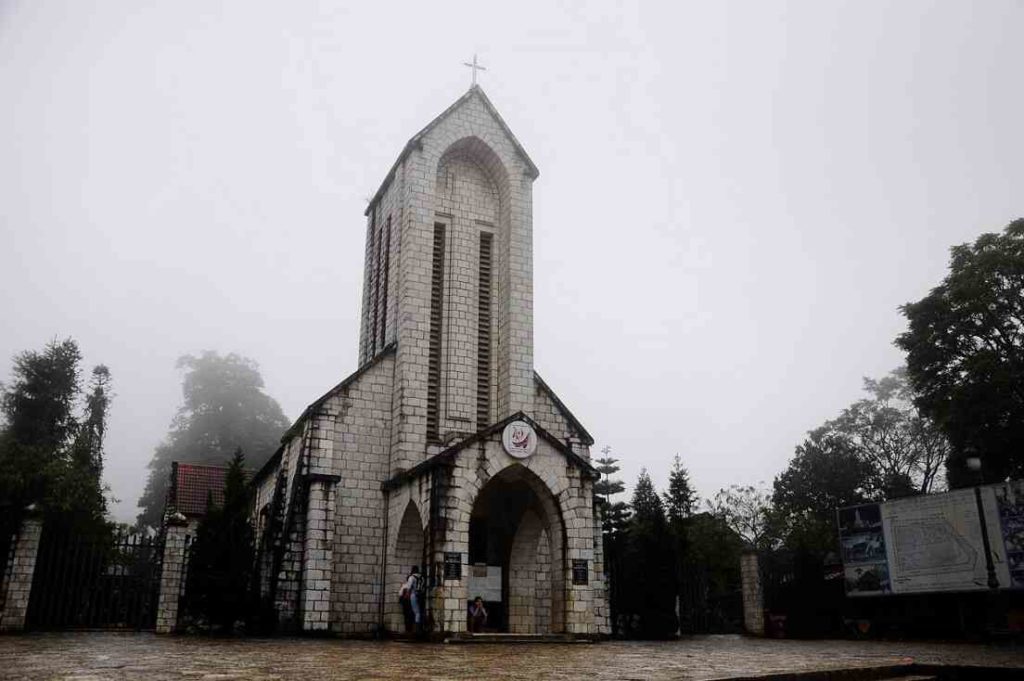 The church, built of stone, features a cross-shaped bell tower towards the west. It has 32 colorful stained glass windows that shine in sunlight depicting Jesus’s life. 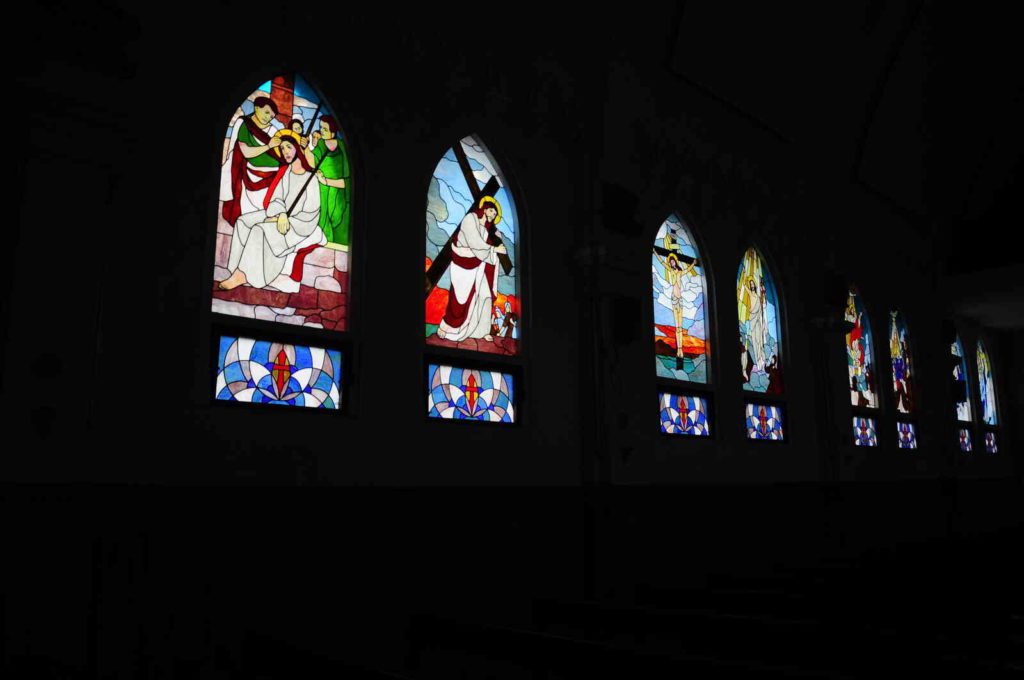 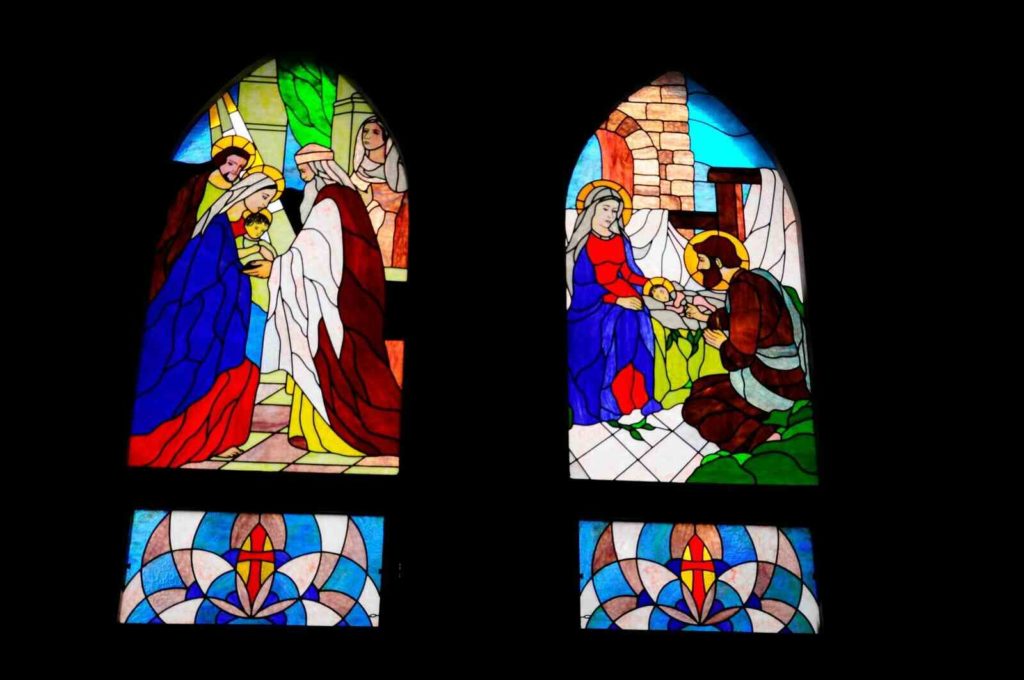 In front of the church is the unique love market that’s held every Saturday evening, marking a distinctive cultural tradition of the Hmong and Dao ethnic minority communities. Young men and women dress in vividly colorful traditional clothing and exchange messages of love and endearment via dances, panpipe playing, songs, and traditional games.

Around 12 kilometers from downtown Sa Pa, the Ta Phin Village is home to the Red Dao people who have a long tradition of growing medicinal herbs around the town.

Using a secret blend of leaves and bark collected in the wild, the Red Dao people have created a formula for a soothing hot bath in a wooden barrel that they claim will ward off sickness and help women recover immediately after birth. 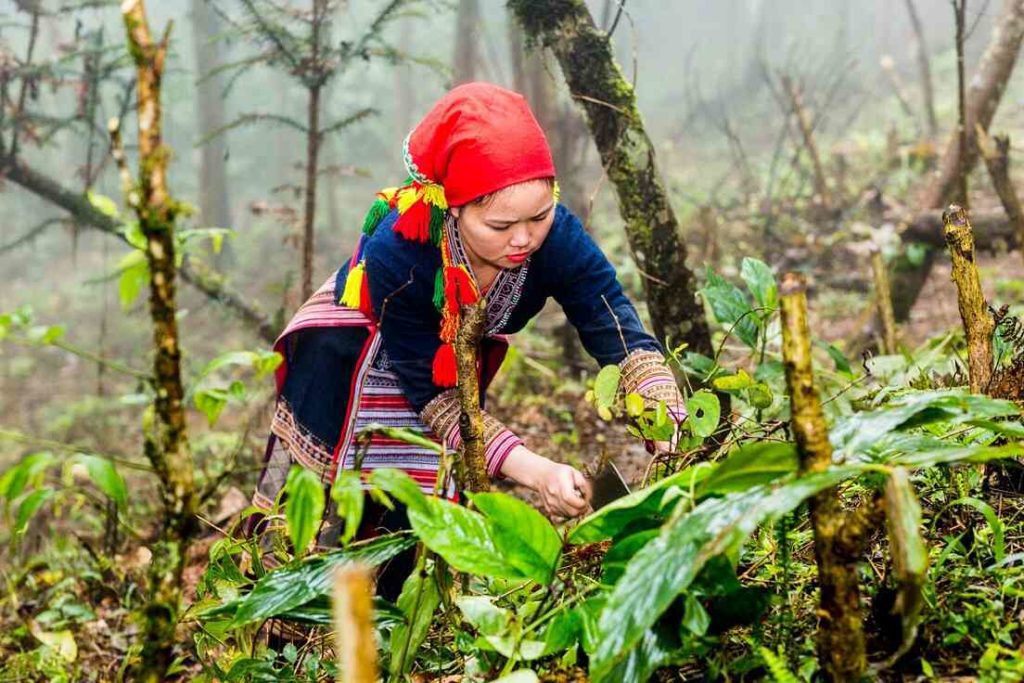 Around two kilometers from the center of Sa Pa, Cat Cat is home to Hmong families who have preserved many customs and traditional crafts like weaving, silver carving, and jewelry making. 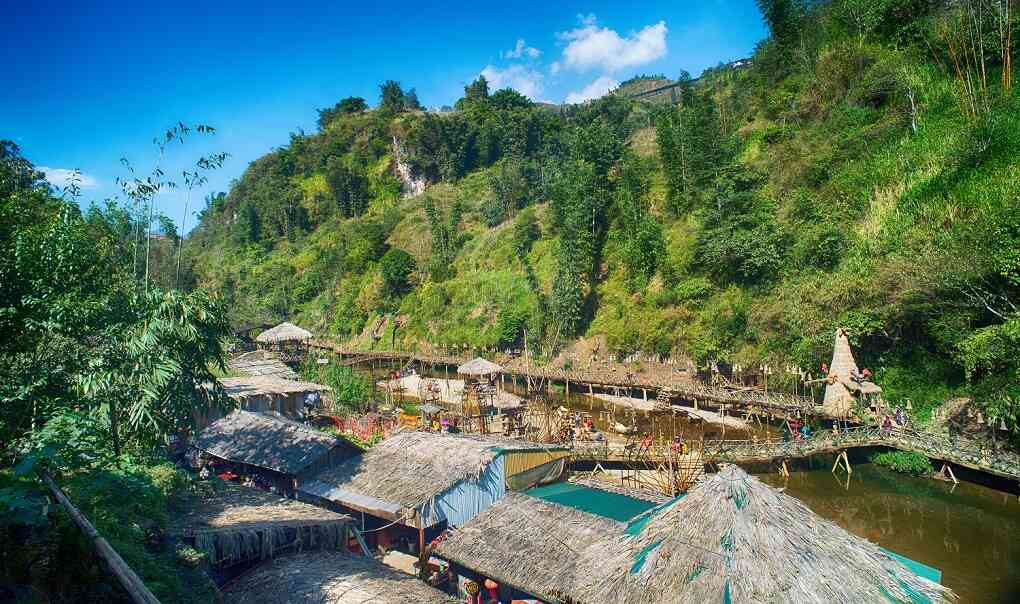 The winding roads to the village road with terraced rice fields on either side makes this a specially beautiful trip.

Homestay services offered by local families are opportunities for close encounters with the distinct culture of this community as well as to witness first hand their efforts to keep their traditional crafts intact for generations to come.

A 600-meter-high suspension bridge called Rong May on the top of O Quy Ho Pass with separate wooden planks hanging amidst beautiful vistas in Sa Pa offers a thrilling experience, but this might not be an adventure for the faint-hearted. 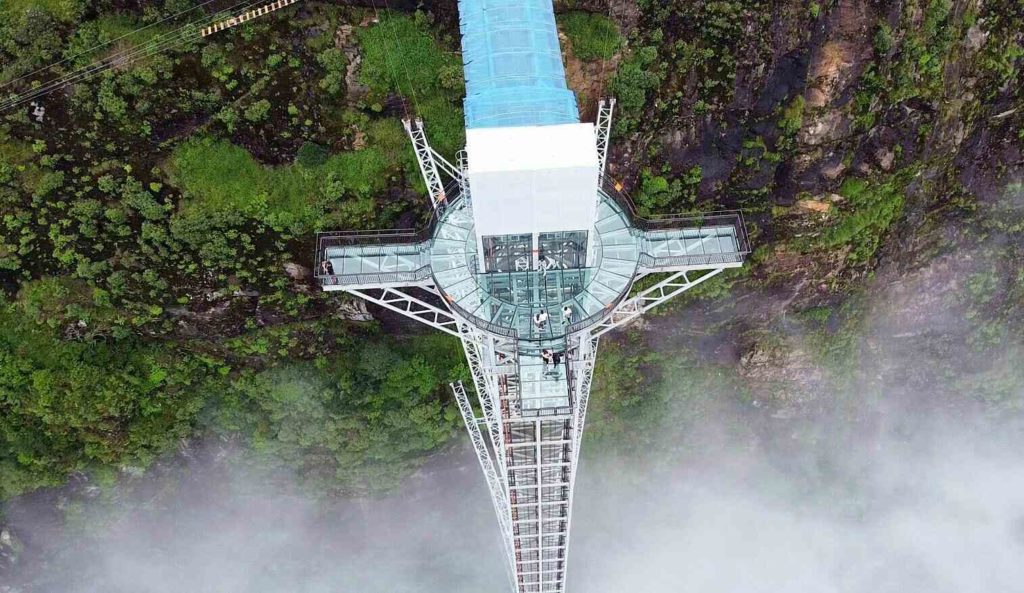 Visitors who chose to take the challenge of “walking” on the 171 wooden steps to cross the bridge are rewarded with stunning panoramic views of O Quy Ho Pass and the Hoang Lien Son mountain range, which stretches 180 kilometers across the northwestern provinces of Lao Cai, Lai Chau and Yen Bai. 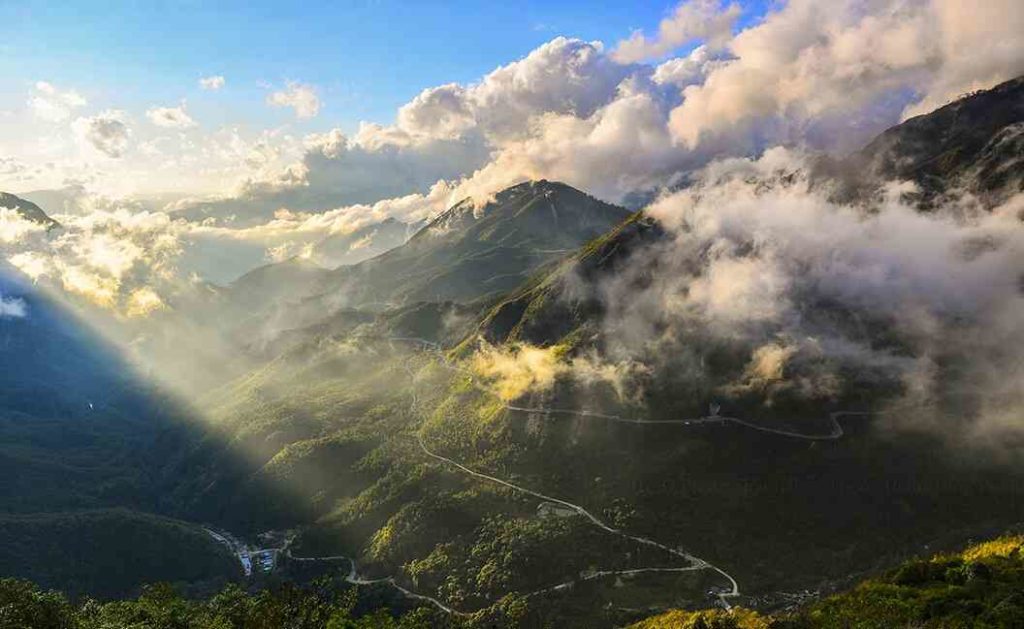 Sa Pa is home to several ethnic minority groups including the Hmong, Dao, Giay, Xa Pho and Tay who live together in harmony with nature and with each other. This can be experienced in part by visiting one of the markets that take place once a week around town every Sunday morning, like Muong Hum or Bac Ha. 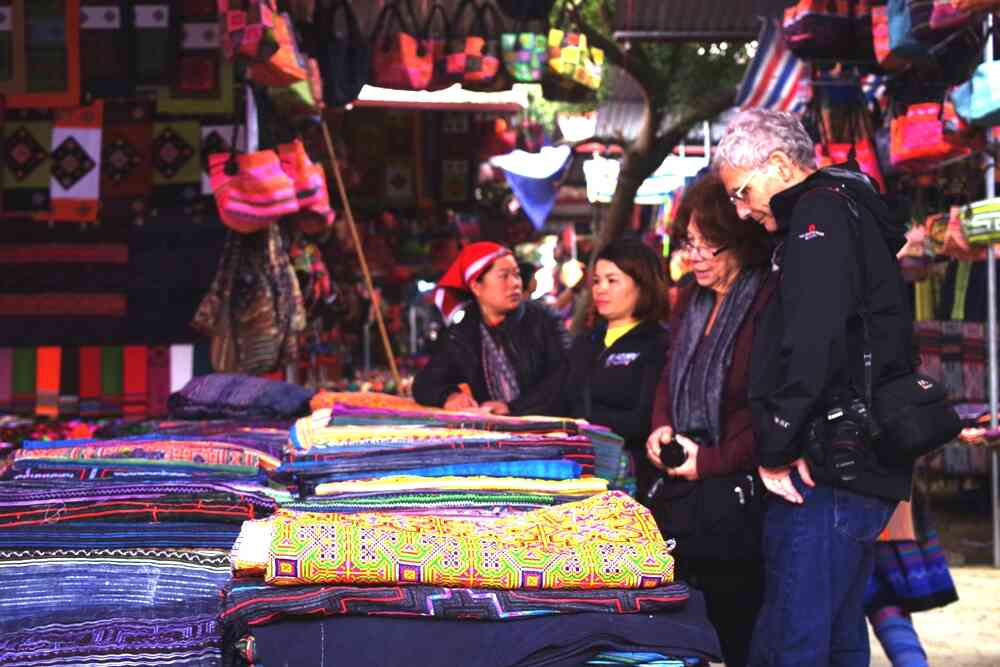 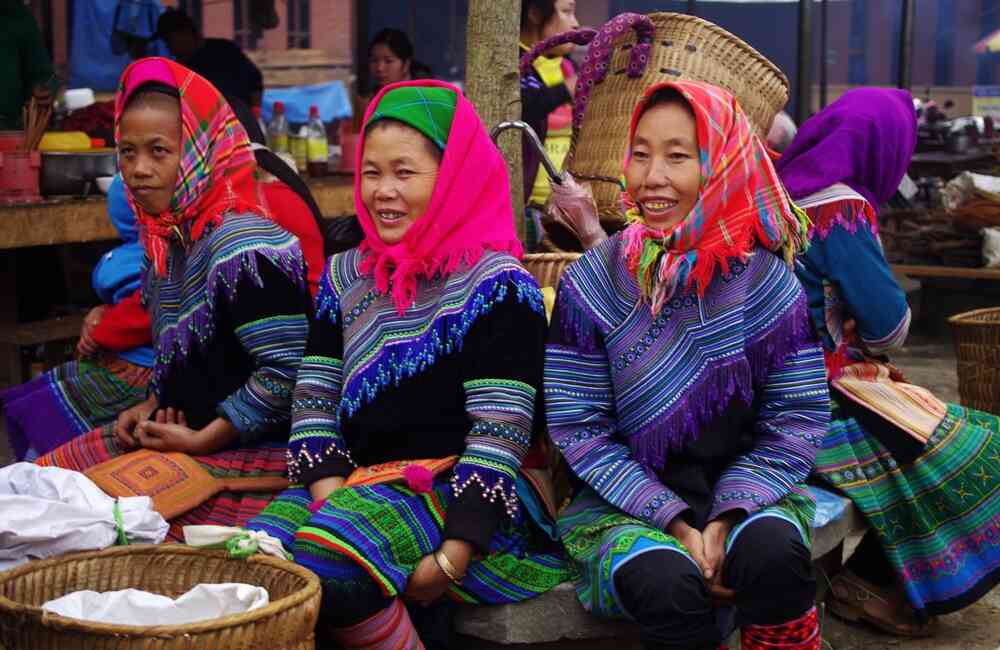 The sight of Vietnam’s ethnic minority communities dressed in their traditional costumes, hawking native products and offering samples of their local cuisine will be great memories to anyone visiting Sa Pa.

WHAT TO EAT IN SAPA

In Sa Pa, visitors can see how a Hmong-style pizza is made as chefs knead the dough, bake it in a blazing oven and add local sausages.

The traditional Italian way of making pizza crust with fermented flour, tomato sauce and cheese is retained. After the baked crust comes out of the oven, the chef chops Sa Pa sausages and puts them in the middle of the pizza instead of spreading them evenly. Herbs like cilantro and mint are added next.

This pizza is the signature dish at Pi’s Boutique, a hotel on Fansipan Road in the center of Sa Pa Town. 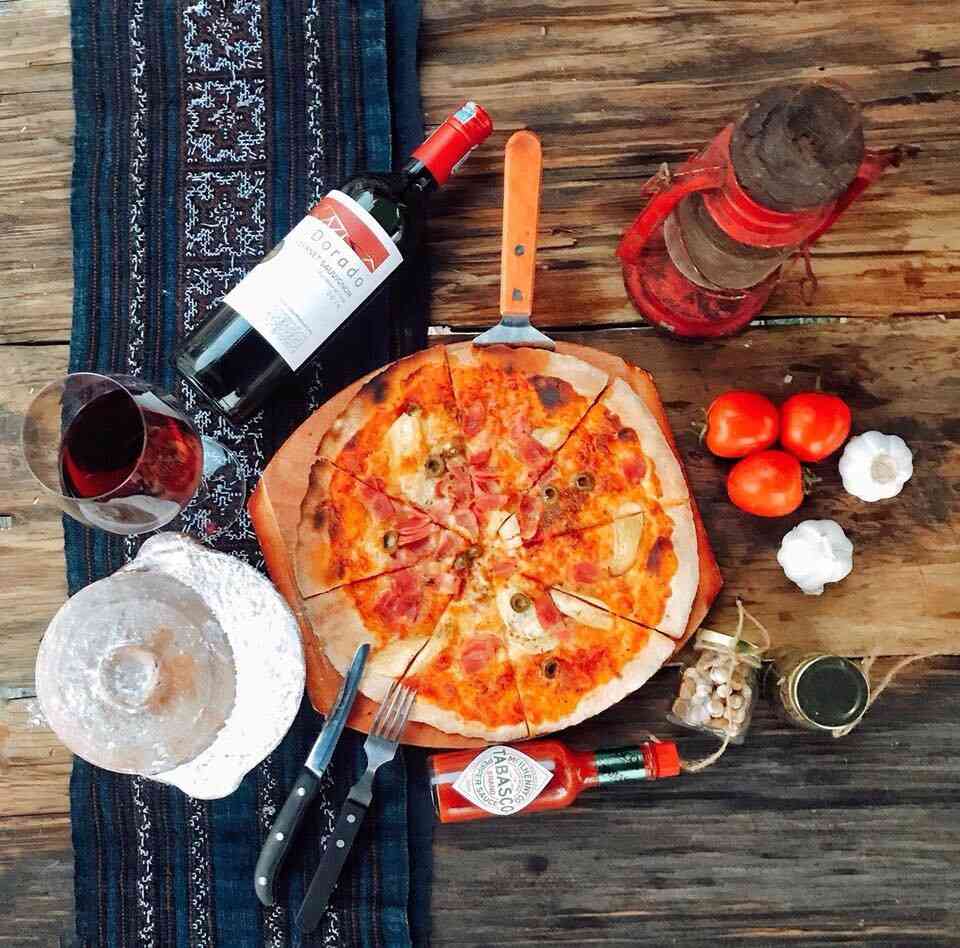 Its cool and chilly weather throughout the year makes the northern mountainous town an ideal place for breeding salmon. A variety of salmon dishes are served by almost every restaurant in Sa Pa – soups, hotpots, raw salads and other dishes. 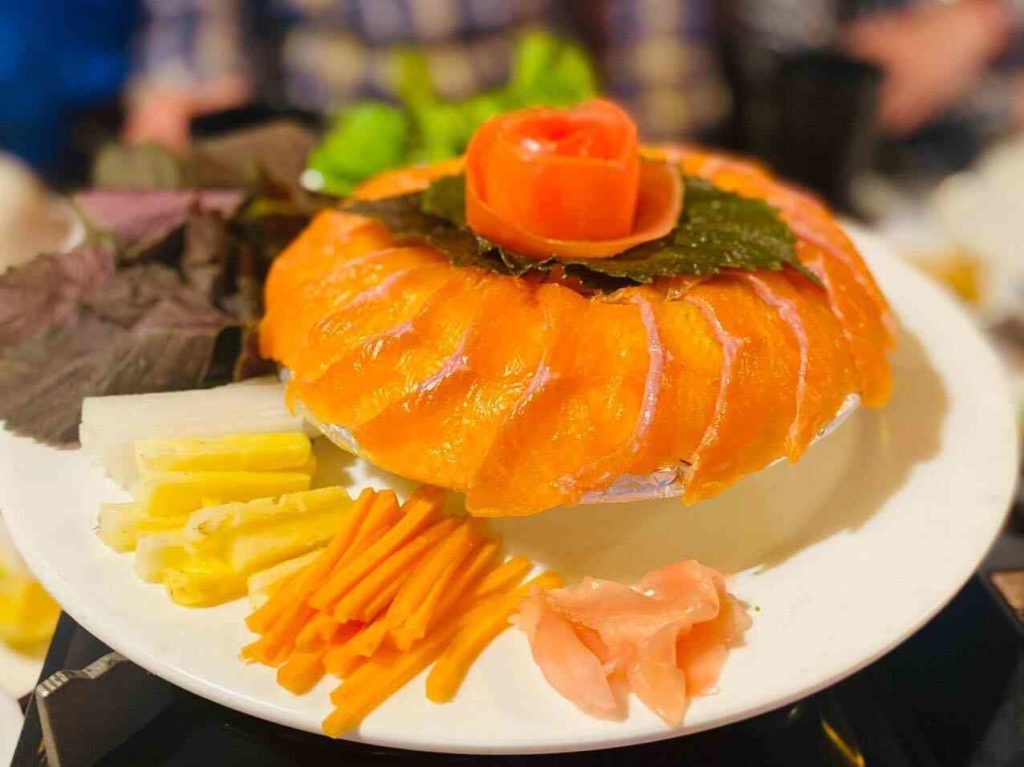 The salmon in Sa Pa is well-known for being firm, low in fat, and high in nutritional value.

It is often served in a hot pot with sour broth with vegetables, mushrooms. A salmon hotpot for two costs VND300,000 ($13). 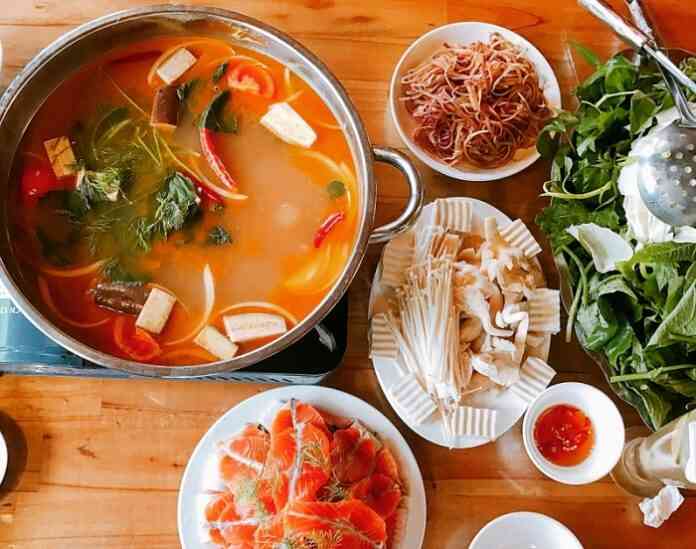 Known as a unique dish with a special aroma, thang co, which is traditionally made with the meat and offal of horses or buffaloes, is a signature dish of the Hmong people in Sa Pa. The dish has been around for more than 200 years.

The name of the dish means soup cooked in a big pan. The main ingredients are meat, bones and internal organs of the horse or buffalo combined with more than 20 herbs and spices including cardamom, citronella, ginger, star aniseed and cinnamon bark. 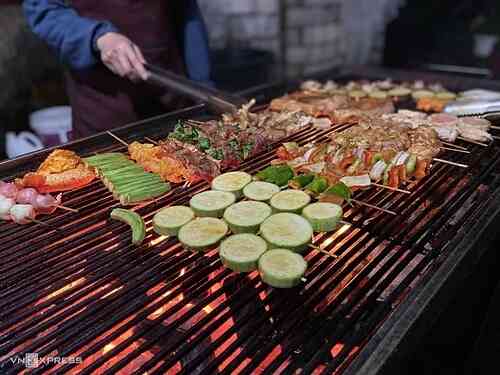 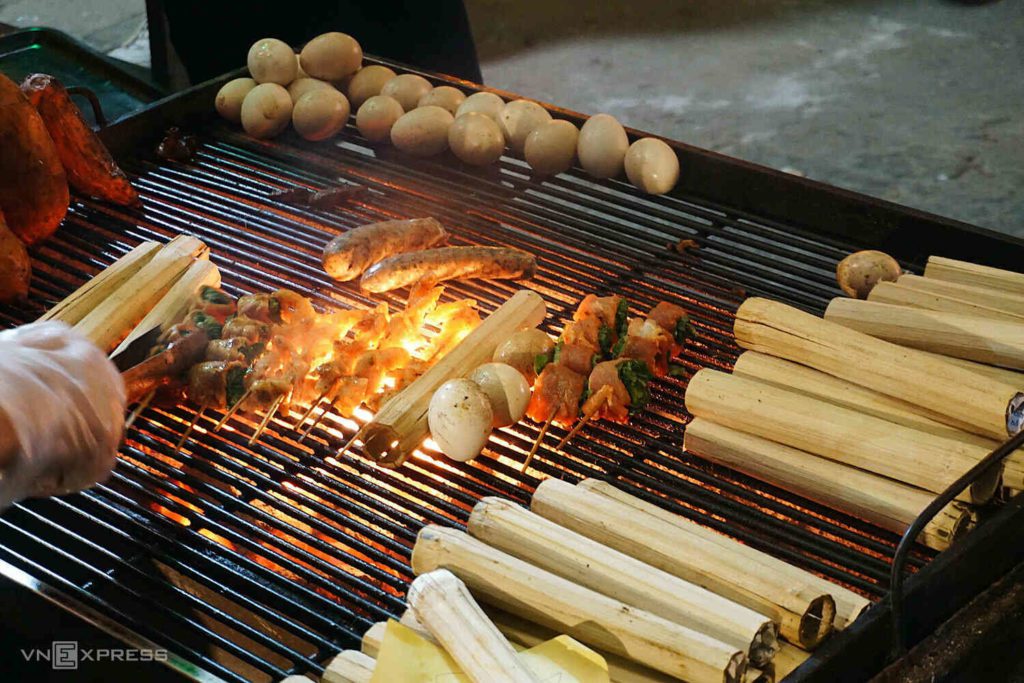 Grilled and skewered meat, chicken egg, sweet potatoes, Chinese cabbage, cucumbers and carrots are a big part of Sa Pa cuisine that can be tasted at street food stalls in the downtown area.

Author : Hoang Phong . This post was posted on  vnexpress.net

Travel news 04-2022 UK Bans travel from 6 African Countries due to the rise of a new mutant strain of coronavirus.

A Solo Journey Information to Thailand